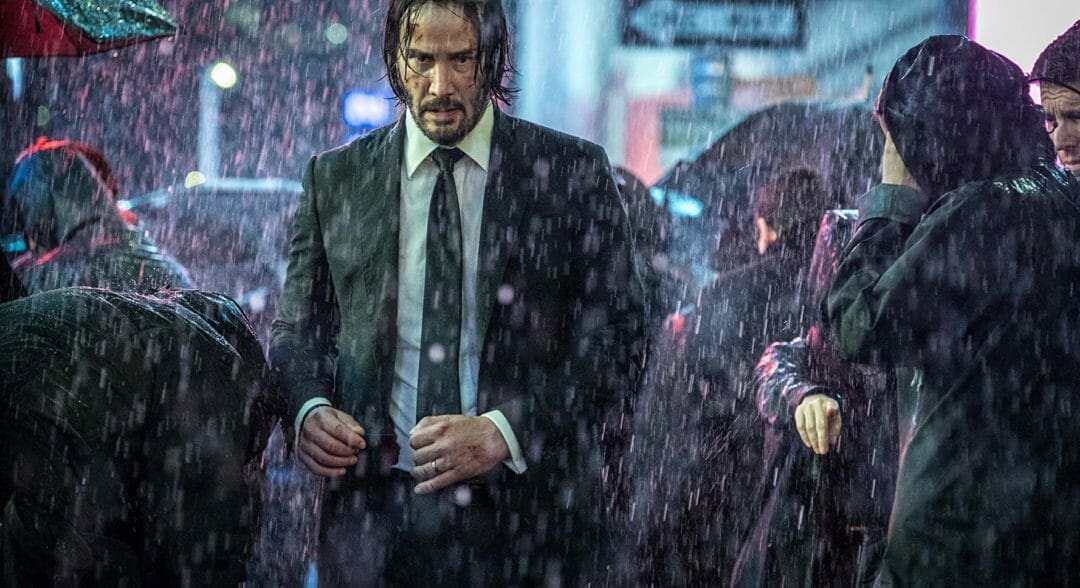 Either way, John Wick is back and reluctantly still in business in the Third John Wick installment; John Wick Chapter 3 – Parabellum. Chad Stahelski directs for a third time, from a screenplay by Derek Kolstad, Shay Hatten, Chris Collins, and Marc Abrams. Taking place immediately after the second film, our favorite well-dressed man-for-hire is now excommunicato from his elite, mysterious group of affluent criminals and homeless men. His previous safe haven, the Continental Hotel, and every-other service available to him; guns, ammunition, doctors, sanctuary – have been shut off with a bounty placed on his head. A really high bounty. Enough to have every hitman’s head turn, phone beep, and watch tapped in the city. Tick tock, Mr. Wick.

Really though, if you’ve slept on the John Wick franchise, it isn’t too late to kick off an at-home matinee marathon and park your butt in a theater seat for #3 by prime-time. Each installment has grown increasingly intense, with some of the most creatively and well-executed fight scenes to traipse through a library of historical fiction, a horse stable, ON a horse, or a weaponry museum. (Seriously. Those three fights went down in the first half-hour of this film.) John Wick is a neo-noir lone ranger who refuses to tire, back down, or ride into the sunset. And we never, ever want him to. Ride on, Cowboy.

“John Wick is a neo-noir lone ranger who refuses to tire, back down or ride into the sunset. And we never, ever want him to.”

Reading my adjective-laden introduction you’re likely saying to yourself, ‘How am I going to suspend my disbelief enough for this one, Kim?’ The answer is – you don’t have to. The John Wick franchise is fully aware of its superficial depth and pre-ordained plot, and isn’t afraid to poke fun along with you. As a matter of fact, the very thing that the entire fictional universe rests on, a society based on honor and a vaguely established rule-system based on ornate, specially crafted pirate’s gold – is where the film is its weakest. But that weakness is given the cushiest, most audience-pleasing of landings by using those very rules to evoke yucks and chucks from the viewer in-between jaw-droppingly choreographed fight sequences. “All this over a dog?” a character asks with stylized subtitles ornately revealing the word D-O-G. Poor John gets the dog low-blow from nearly every new micro-boss encounter of this movie, but hey – he also happens to be a horse whisperer – so clearly, our main boy is a man of the animals. In John Wick Chapter 3 – Parabellum, Mr. Wick is joined by some beloved familiar faces. Head of the Continental Hotel, Winston, who is perfectly personified by the perpetually charming Ian McShane. Mark Dacascos returns as eyes and ears of the Continental, Zero, who unlocks some major fire-power and marksmanship to go with that dazzling hospitality. Laurence Fishburne ominously lurks along the sidelines as the Bowery King, as mysterious a player as ever in this land of organized chaos.

New players sign on as John heads to Casablanca to seek the help of hitwoman Sylvia, played by Halle Berry. And lucky for us, Sylvia introduces her two wonderful hounds into the world of John Wick’s endless fight sequences, which gives choreographers the opportunity to double-down their ballistics ballet by adding the insanity of super-charged attack dogs into the mix. Berry herself gets an extensive sequence to flex her well-tuned agility muscle and mad marksmanship throughout the Moroccan village. Catwoman who. And while John races through the city with mysterious coins, old-friends turned to enemies, and new friends turning their backs – the stylized universe of Chapter 3 rains down upon him. John Wick has stepped right out from his perfectly lit poster – or perhaps we’ve stepped into it. The moody jewel tones ooze their neon glow and infect the backdrop of every set piece, so much that characters themselves wield their own lighting during the final battle.  Pinks and purples idle on slick streets, waiting for John’s hooves to slam past. And slam they do.

Knives, fists, firearms, and his own belt – John Wick is still in the business of kicking ass and creating corpses. An expertly crafted crowd-pleaser, this train is steamrolling into a beloved franchise, with no signs of slowing. John Wick Chapter 3 – Parabellum is faster, slicker, and cooler than any action flick you’ve ever seen before. Consider me counting on #4.

TLDR Knives, fists, firearms, and his own belt - John Wick is still in the business of kicking ass and creating corpses. An expertly crafted crowd-pleaser, this train is steamrolling into a beloved franchise, with no signs of slowing. John Wick Chapter 3 - Parabellum is faster, slicker, and cooler than any action flick you've ever seen before. Consider me counting on #4.