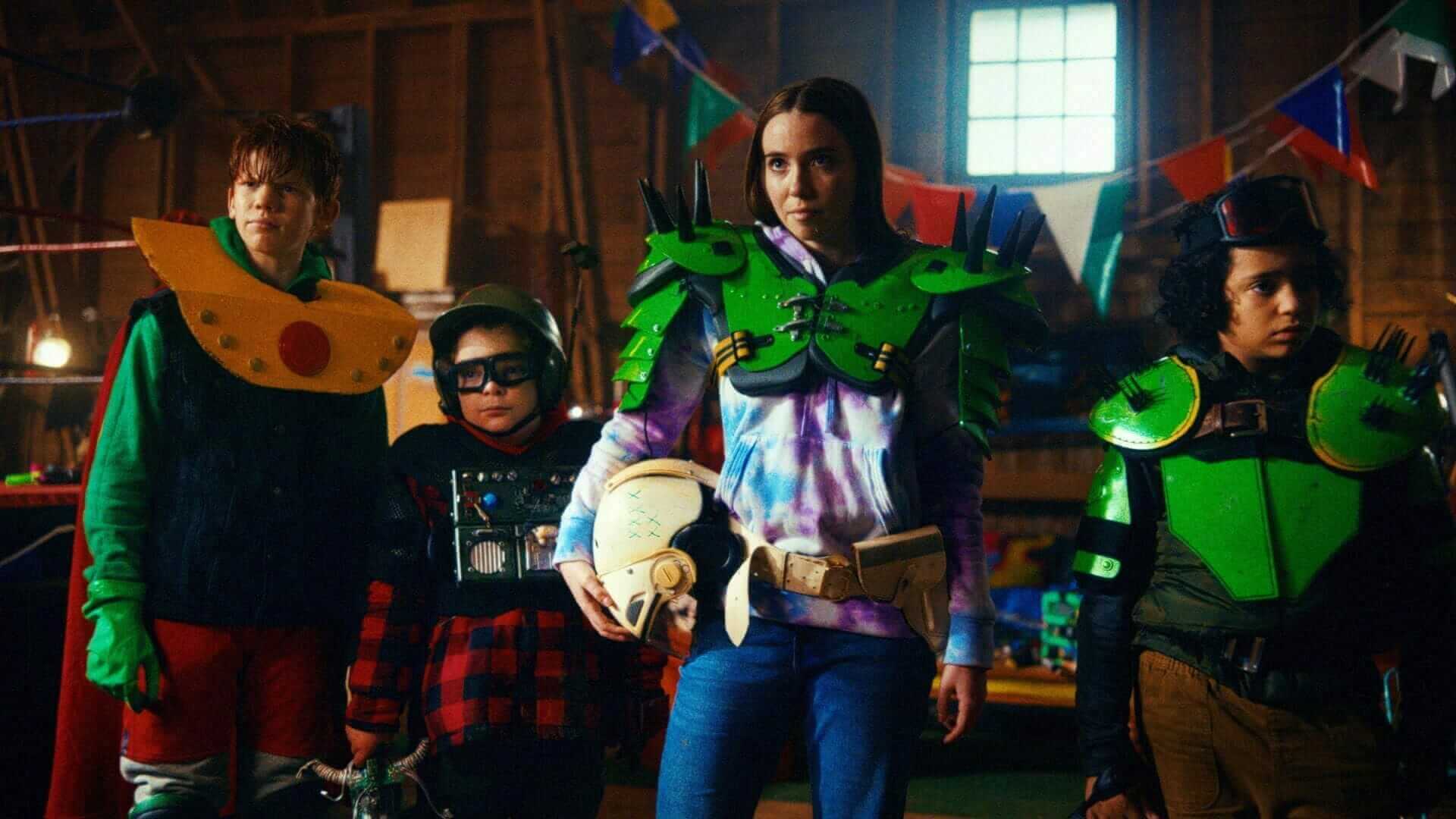 Jason Eisener’s Kids vs. Aliens is a Saturday morning cartoon splatter-fest that, if you’re in the right mood, you’ll eat up like a bowl of sugary cereal. It’s over-the-top fun with a silly cast of characters and a full-scale alien invasion of creatures that melt people with a thick orange goo to harvest fuel for their spaceships. Shuffled into that stacked sci-fi deck of cards is a crew of wrestling obsessed weirdo kids just trying to make a movie in their backyard, a heavy metal synth soundtrack wild card, and (the ace up the sleeve) some rockin’ low-fi practical effects.

Genre fans will no doubt remember Eisener’s 2011 Hobo With A Shotgun, which saw Rutger Hauer deliver two barrels of street justice as a gritty, gun-wielding vigilante. With Kids vs. Aliens, Eisener returns with longtime writing partner John Davies for a flick that is every bit as cartoonish as their previous work together. Whether that works for you or not is a matter of personal taste but as a goofy sci-fi/action hybrid nostalgic for mid 80s filmmaking, it’s a real mission accomplished project. 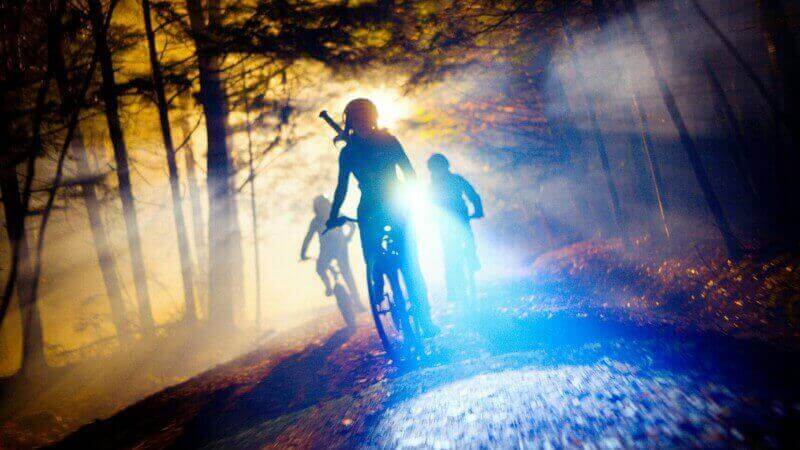 Outside of features, Eisener has been one of the driving forces behind The Dark Side of The Ring (and more recently Tales From The Territories) so it will come as no surprise that the Kids of Kids vs. Aliens are obsessed with wrestling. Before they become a miniature army defending earth from a gaggle of alien creeps, Gary (Dominic Mariche) and his friends spend their days making movies in their backyard. Tragically, homemade movie falls to pieces when Gary‘s older sister Samantha (Phoebe Rex), their lead actresses and all-round badass, is scooped up by the movie’s real villain: Teenagers.

Oh yeah, it’s also Halloween- because Kids vs. Aliens brings a real “kitchen sink” approach to storytelling. If there’s any itch your sentimental nostalgia bone needs scratched, this movie’s got ya covered. Jonesin’ for a Tangerine Dream–inspired synth score? You got it! You want teenagers meeting on a rooftop at sunset like they live in a Michael Mann movie? Coming right up! Desperate for some sword and sandal showdowns with costume armor and bladed weapons? It’s all yours!

“…a loving sci-fi splatter-fest that’s as retro as it is rad.”

The full-frontal assault of that 30-foot nostalgia wave was too much for me to handle, but the movie kept winning back time-after-time with a clever camera movement or a rad, goopy practical effect. There is a scrappy, handmade brilliance all throughout, but every moment feels filtered through a love and appreciation of someone else’s work like a mixtape of memories and inspiration. The soundtrack as well will either become your new favorite or an instant enemy. It shifts gears as each scene needs (a little dreamy synth here, a little glam metal there) but it’s oddly never-ending, with almost no scene left unscored.


Your mileage on these beats may vary but there’s no argument that the alien creatures of this invasion flick are the highlight of the film. They appear initially in the background, reaching out from the darkness with their long talon fingers, before their full-scale abduction begins. And when the story kicks into high gear you’re given some Temple of Doom level alien shenanigans, including ceremonial skin-melting, genetic mutations, and gory alien deaths. 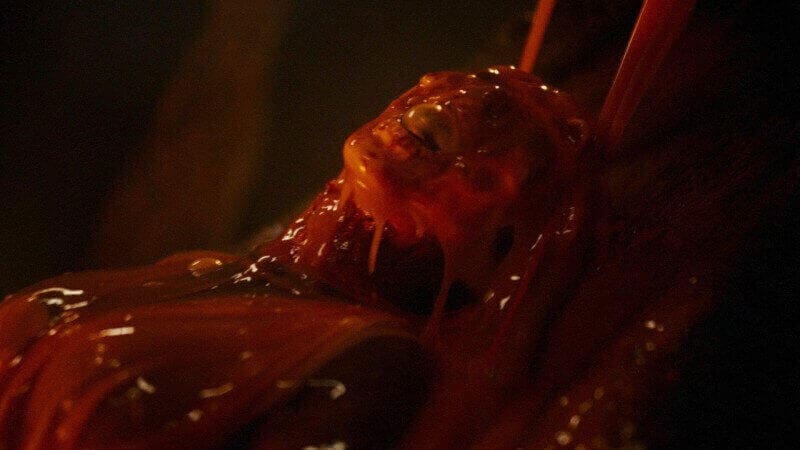 If you also feel like you’ve overdosed on nostalgia these last few years, then you may find your patience tested here and there but there’s no denying the passion and dedication of the everyone involved. Kids vs. Aliens is a loving sci-fi splatter-fest that’s as retro as it is rad.

Jason Eisener’s alien invasion flick Kids vs. Aliens invades Select Theatres, OnDemand, and Digital January 20, 2023. As a RLJE Films and Shudder co-release, it will likely also be coming to the Shudder platform at some time although no streaming release date has yet been announced. Let us know if you’re excited to see this goofy feature adaptation of Eisener’s V/H/S segment “Slumber Party Alien Abduction” over on Twitter or in the Nightmare on Film Street Discord! 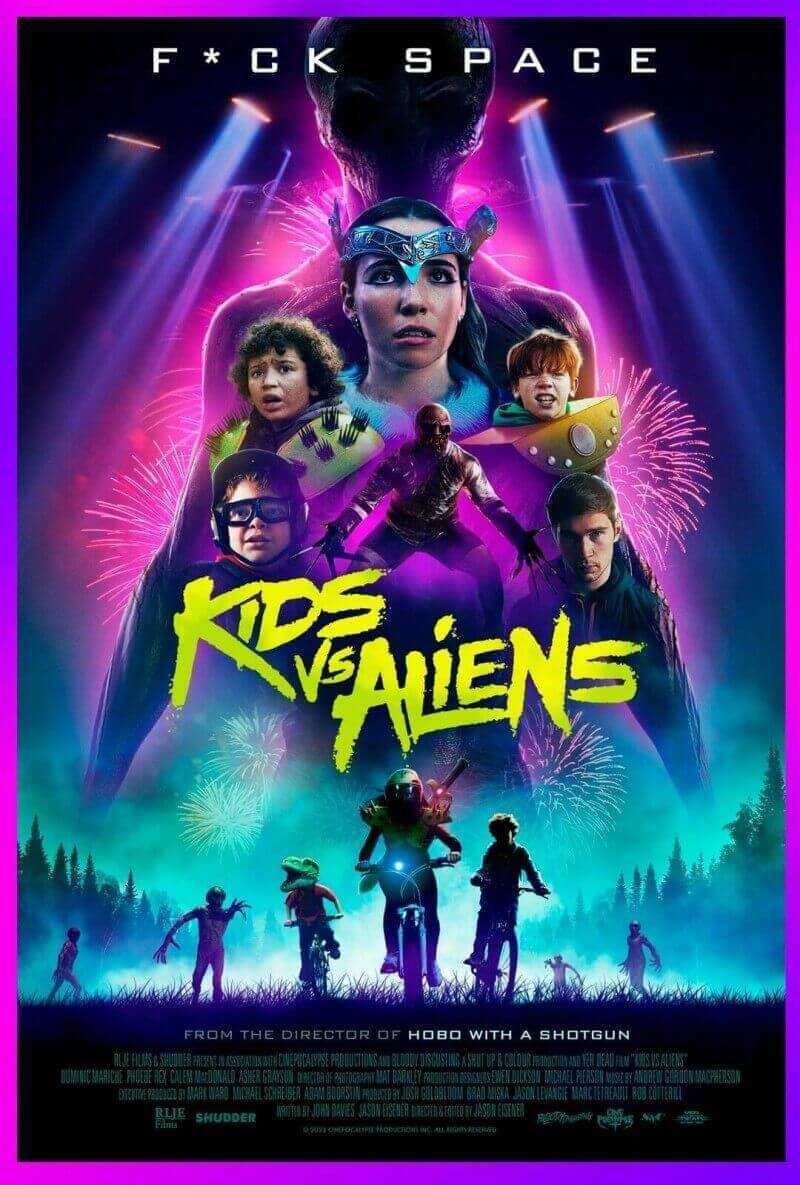 Review: KIDS VS ALIENS
TLDR
Jason Eisener's Kids vs. Aliens is a Saturday morning cartoon splatter-fest that, if you're in the right mood, you'll eat up like a bowl of sugary cereal. It's over-the-top fun with a silly cast of characters and a full-scale alien invasion. If you also feel like you've already overdosed on nostalgia then you may find your patience tested here and there but there's no denying the passion and dedication of the everyone involved. Kids vs. Aliens is a loving sci-fi splatter-fest that's as retro as it is rad.
Story
50
Alien Creatures
85
Practical Effects
80
The Nostalgia Of It All
50
66