[Review] Meat is Off the Menu in the WRONG TURN Reboot

When Wrong Turn (2003) rocked onto our cinema screens 18 years ago, it gave us a new and inventive entry into the cannibal horror genre. Shot mostly in daylight, and with three ruthless cannibal killers stalking the woods, Wrong Turn was the perfect mix of fun and scary. Six sequels later, the last one being released in 2014, it seemed like the Wrong Turn series had nowhere to go apart from starting again from the beginning. Wrong Turn (2021) sets out to introduce the series to a fresh generation of horror lovers as it takes us into the woods surrounding the Appalachian Trail.

The story opens with Scott (Matthew Modine), looking for his daughter Jen (Charlotte Vega) who has been missing for the past six weeks after heading out hiking with her boyfriend Darius (Adain Bradley), as well as couples Milla (Emma Dumont) and Adam (Dylan McTee), and Luis (Adrian Favela) and Gary (Vardaan Arora). The townsfolk are cagey about what may have happened to Jen, with many admitting to having seen her and her friends, but not offering any help as to what happened to her after that.

“[…] there’s lots to like about Wrong Turn if you’re a gore-lover.”

We then jump to six weeks earlier, as Jen and her friends arrive in town, ready to head out on their hike the next day. So often with movies like Wrong Turn, we’re introduced to characters very quickly before they start being systematically murdered, and so, it was nice to spend a little time with the gang before they head into the woods to meet their doom. We find out unlike the usual group of teens or college students, Jen’s friends are a little older and all very successful, even if she is struggling to find her place in life. The group is given the usual townsfolk advice to stay on the path and not get lost, which of course, they ignore. Almost immediately after they start hiking, Darius suggests leaving the path, and the group is soon lost in the woods. Things go from bad to worse when a huge tree trunk rolls down the steep embankment towards the group, causing one group member to be on the receiving end of perhaps one of the best head-squishing effects I’ve ever seen.

From this point on, the woods are full of boobytraps, and figures are skittering in your peripheral vision at every turn, making nowhere feel safe as the group slowly recognizes the seriousness of the situation they are in. At 45 minutes into the runtime, the surviving members of the group are captured, and the movie takes a turn into different territory for a Wrong Turn movie (though not really if you read the synopsis). Rather than inbred cannibal hillbillies, the ‘baddies’ are the Foundation, a self-sufficient community who live in the woods to create a different life for themselves outside of society. As a result, they are very hostile to anyone who enters their area of the mountain. However, the reason they have captured Jen and her friends is to dole out justice after one of their men was killed in the earlier chase and struggle. 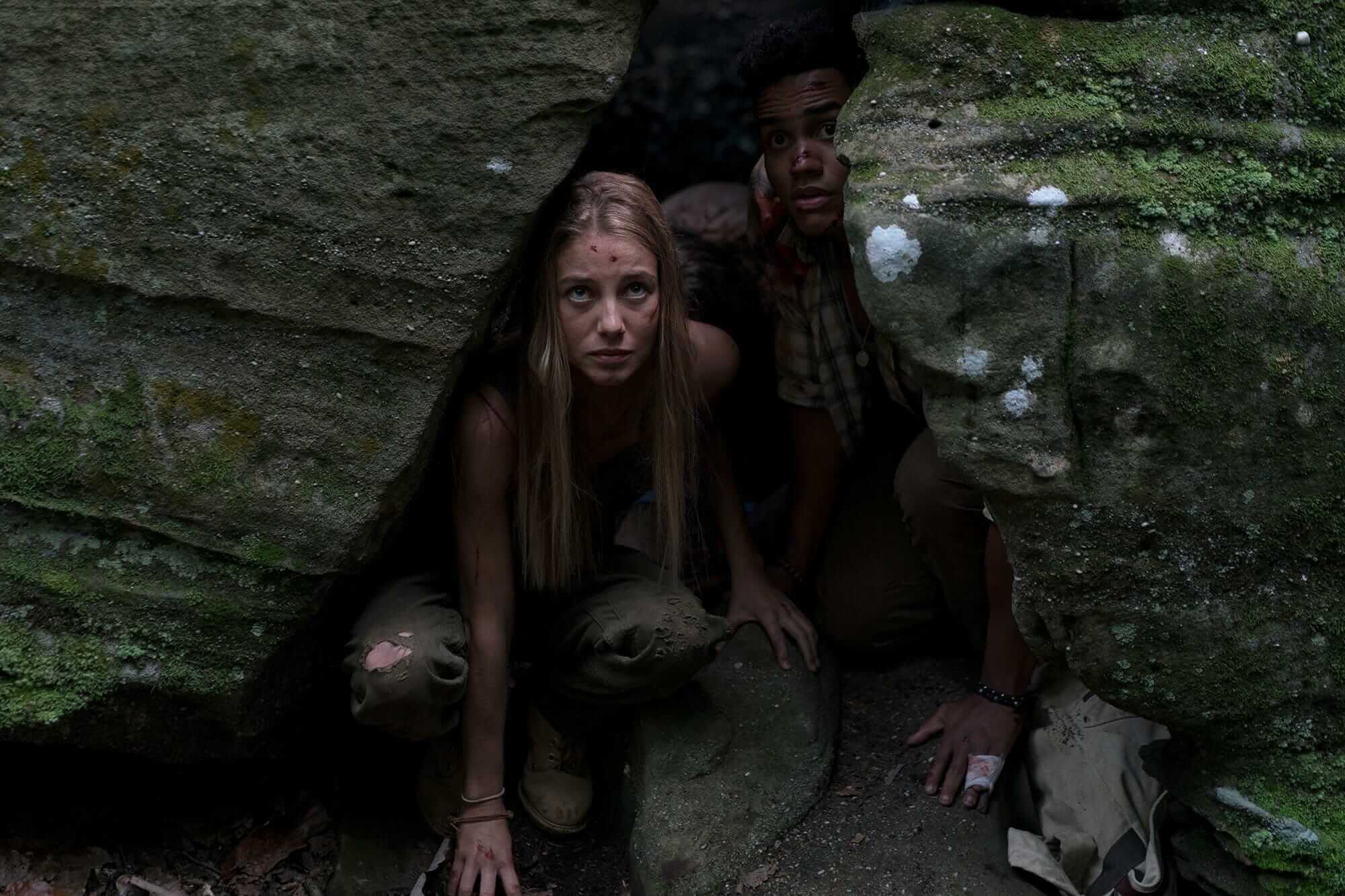 One way that Wrong Turn does to do the series justice is the brilliance of the kills and the kill effects. Aside from the previously-mentioned head squish, there are broken bones, impalements, eye trauma, and a whole lot more head squishing. The effects all looked practical where possible, and incredibly realistic. The sheer selection of booby traps and punishments that the Foundation dish out also makes for a gruesome watch, making it feel right home in the Wrong Turn franchise.

Charlotte Vega’s performance as our lead Jen is impressive. She immediately proves herself as the most sensible and likable of the group, even if she’s struggling to know what to do with her future. From the minute they enter the woods, you believe Jen’s fear as well as her strong will to survive, which keeps going right until the end credits. She’s definitely one of the most formidable final girls in recent times and deserves respect for how well she deals with the whole situation where her friends around her fail.

It’s a shame then that the Foundation lacks any real presence or scariness once they are revealed from under their animal skull costumes. By shifting away from the cannibal aspect and into this folk horror storyline, the Foundation just fails by comparison to other similar folk cults that appear in films such as Midsommar (2019) and The Wicker Man (1973). Once we get the big reveal of their existence 45 minutes into the almost two-hour runtime, most of the Foundation’s impact is lost, making them far more forgettable than the cannibal brothers from the 2003 movie. 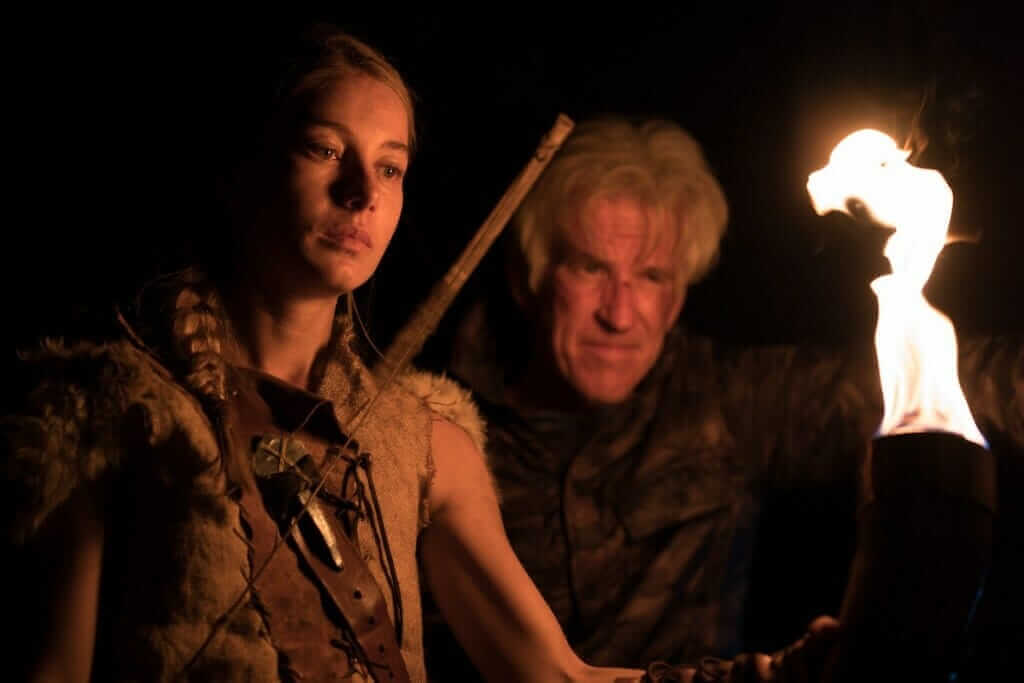 Speaking of the two-hour runtime, Wrong Turn definitely feels a little too long. With 20 minutes still to go, it seemed like we’d reached a natural endpoint. However, there was more than one false ending tacked on to make the movie a little nastier and to ramp up those last-minute scares. Considering how fast-paced the first section of the movie is once we hit the woods, it’s unfortunate the film drags in the middle.

Overall, there’s lots to like about Wrong Turn if you’re a gore-lover. There are more than a few genuine jump scares and creepy moments as the group of friends run blindly through the woods, and the costume design for the Foundation is fantastically eerie. It just feels a little drawn-out and dull once it hits the halfway point. I’m not sure what connection this movie holds to the rest of the Wrong Turn series, apart from killers lurking in the woods, so it does feel like a very disjointed entry. While the Wrong Turn series may have reached its natural restarting point, I’m not sure this is the reboot the series needed or deserved. I’m just going to say it – I missed the cannibalism.

“I’m just going to say it – I missed the cannibalism.”

Wrong Turn arrives on Blu-ray (plus Digital) and DVD on February 23rd, 2021 from Lionsgate. Share your thoughts on this newest entry in the franchise over on Twitter, Reddit, Facebook, and in the official Nightmare on Film Street Discord. Not a social media fan? Get more horror delivered straight to your inbox by joining the Neighbourhood Watch Newsletter.

TLDR Wrong Turn (2021) sets out to introduce the series to a fresh generation of horror lovers as it takes us into the woods surrounding the Appalachian Trail. Rather than inbred cannibal hillbillies, the ‘baddies’ are the Foundation, a self-sufficient community who live in the woods to create a different life for themselves outside of society. One way that Wrong Turn does to do the series justice is the brilliance of the kills and the kill effects. While the Wrong Turn series may have reached its natural restarting point, I’m not sure this is the reboot the series needed or deserved.