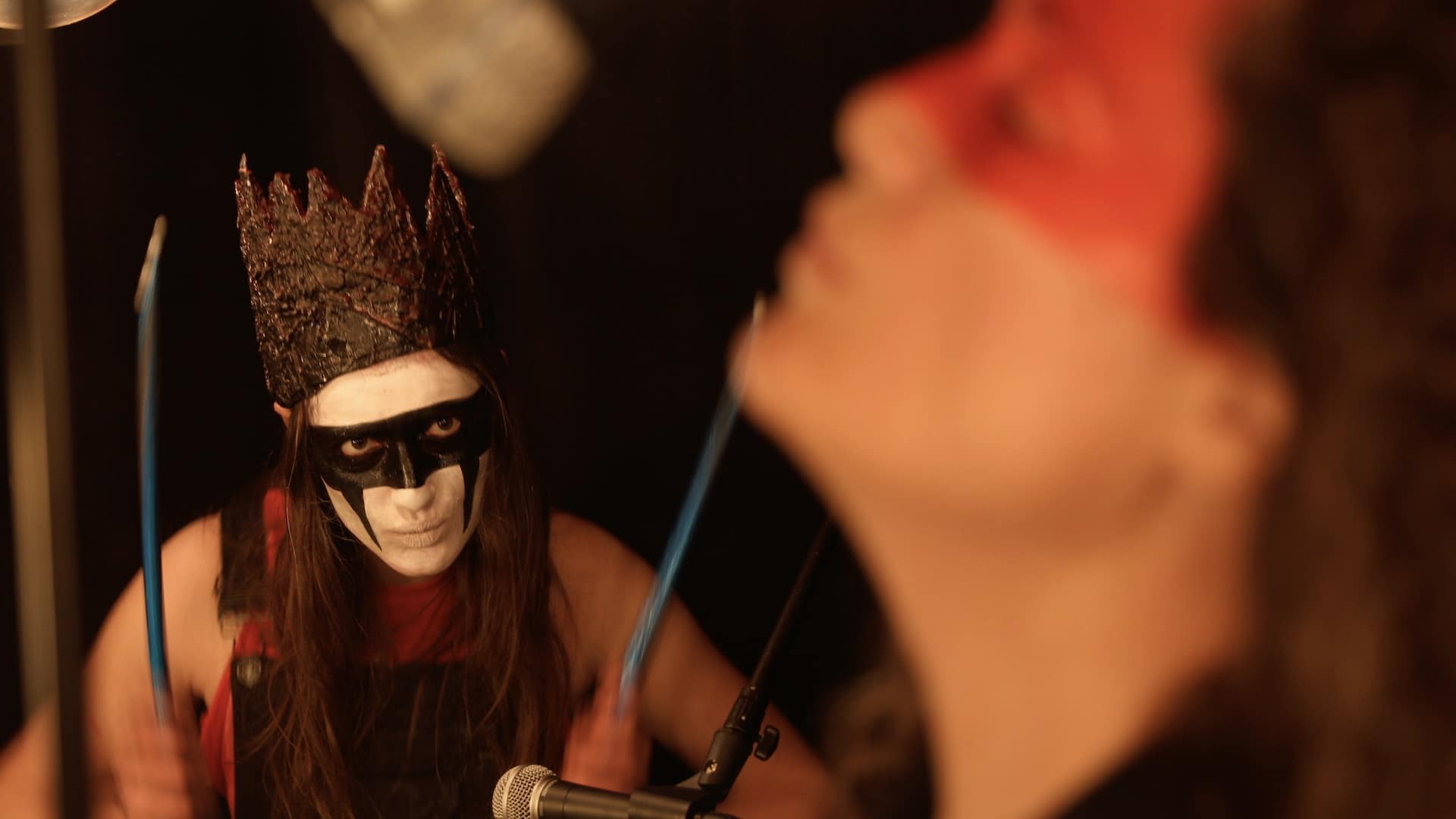 This review was originally published as part of our 2021 Fantasia Film Festival coverage.

Filmmaking is a family affair for the creators behind indie horror Hellbender. Who better to conjure a film about the bonds of family, motherhood, and coming-of-age than a real-life family — the Adams family; made up of matriarch co-writer/director plus actress Toby Poser, patriarch co-writer director plus actor John Adams, and daughters plus actresses Zelda and Lulu Adams.

Hellbender, the Adams Family’s follow-up feature after 2019’s The Deeper You Dig, takes us deep into the isolated woods of the Catskill mountains, where teenage Izzy (Zelda Adams) and her mother (Toby Poser) live a life cordoned off from other people. A cautious and concerned woman, Mother wants what’s best for her daughter. And though the circumstances are vague, we know poor Izzy was pulled from public life and homeschooled on the mountain from the tender age of five.

Both women practice the occult, a more earthen-bound practice than some of horror’s more fantastical entries. The women cast spells with roots, petals, and bark, using the detritus of a forest floor to do their mystical bidding. Though Izzy has outlets like art and her drumkit; the mother-daughter duo frequently play as their rock n’ roll two-piece H6LLB6ND6R for an audience of zero, she yearns to escape the mountain and experience a normal teenage life. Only, Izzy isn’t a normal girl. And the closer she gets to others, the more apparent that will become.

Hellbender combines folk horror with a punk-rock, femme-powered rage. A coming-of-age story that uses both classic pagan inspiration and a more vibrant, modern perspective, Izzy’s journey is told with an expert understanding of the teenage soul. H6LLB6ND6R’s groovy dirges narrate a rebellious spirit without over-revealing the film’s hand, playing numerous times throughout the film to both entertain and plant kernels of punk rock truth with the audience. 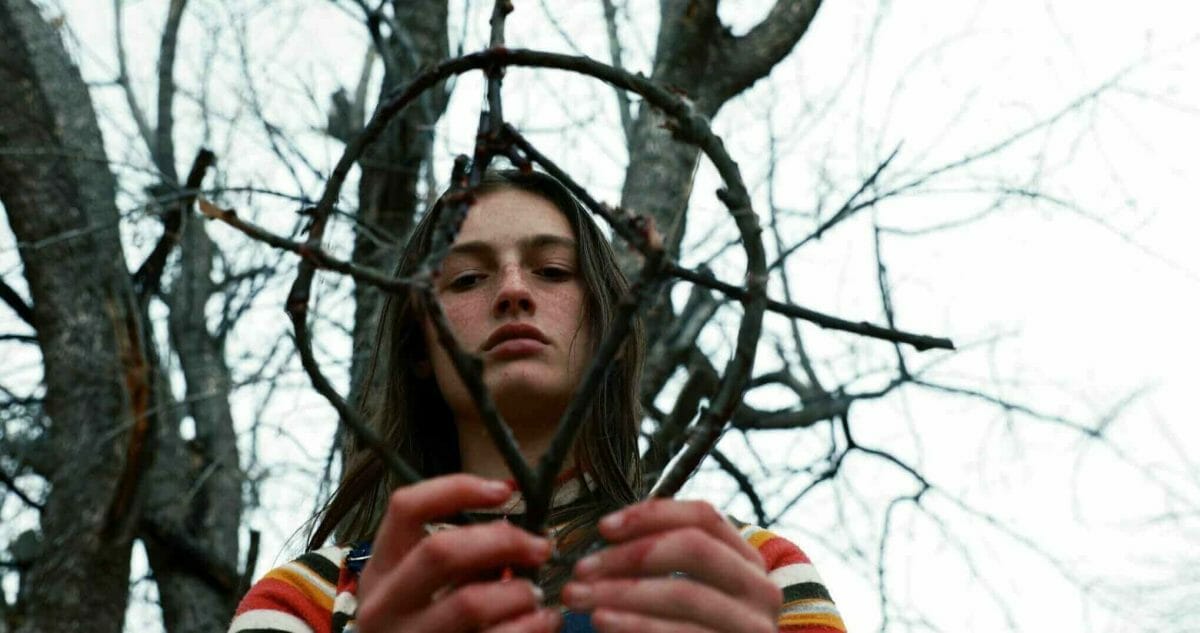 The family unit is masterful at the numerous creative handshakes being made onscreen. The level of primal understanding of their respective crafts and Hellbender’s overall vision are seen in every glance of an actor, pluck of a bass, or tree seen rustling in the breeze.


Zelda Adams is wonderful as the emerging Izzy, who had no easy task of portraying the weight of extended social isolation affecting one’s mannerisms, posture, and gait. (Though we all now know a thing or two about social isolation). And too is real-life matriarch Toby Poser as Izzy’s cautious mother, tightrope walking the line between allowing her maturing daughter new freedoms and the urge to keep her safe from the harms she herself experienced as a girl.

The occultism at Hellbender’s roots is exquisitely crafted; visceral and organic. It’s all mushrooms, ferns, and mill worms. A fictive type of paganism that echoes the film’s organic palette, surrounded by and immersed in nature. Never is the film’s mythology or the witches’ methodology overexplained. They simply exist and have for hundreds of years. We learn what feels like only a page of their ancient grimoire; only what spells the film allows audiences a window to glimpse.

As Izzy challenges the world she knows and the powers she’s only begun to understand, audiences become wrought with the question of whether it’s better to be a mother or a friend, a prison guard, or a fellow inmate.

Overall, Hellbender is a kickass indie horror that keeps it all in the family, both on and off the screen.  Audiences will be eager to trek out to the woods to see this family coven live in concert.

“The occultism at Hellbender’s roots is exquisitely crafted; visceral and organic.”

Hellbender is available to stream right now on Shudder! After you’re done rocking out with your occult out, listen to our interview with The Adams Family on this week’s epsiode of the Nightmare on Film Street Podcast. Be sure to let let us know what you thought of Hellbender over on Twitter, Reddit, Facebook, and in the official Nightmare on Film Street Discord. Not a social media fan? Get more horror delivered straight to your inbox by joining the Neighbourhood Watch Newsletter.

Review: HELLBENDER (2022)
TLDR
The occultism at Hellbender's roots is exquisitely crafted; visceral and organic. A kickass indie horror that keeps it all in the family, both on and off the screen.  Audiences will be eager to trek out to the woods to see this family coven live in concert.
Characters
95
Mood
100
Pacing
70
Plot
80
86