When analyzing the meaning of the word “relic”, one will find descriptions such as “object surviving from an earlier time”, “object of reverence”, “all that is left of something”. It is a word that evokes a somber tone all its own, labeling the memory of what once was, but is no more. Director Natalie Erika James makes her feature film debut representing the impending concepts of death, sacrifice, and memory in her Australian generational horror, Relic.

Possessing a wholly dark composition and embracing effective visual techniques, Relic is a poised genre piece that effectively positions the bones of traditional terror within the tragic anguish of cyclical existence. A galvanizing authenticity sets an unsettling stage throughout Relic as mother and daughter face the final stages of a loved one’s mortality. James intends to show that life is transient but it engages an ongoing vicious cycle, one exceptionally enshrined in Relic.

“Relic is a poised genre piece that effectively positions the bones of traditional terror within the tragic anguish of cyclical existence.”

Starring Robyn Nevin (Upper Middle Bogan), Emily Mortimer (Shutter Island), Bella Heathcote (The Neon Demon), Relic revolves a slow haunt around “the story of Edna, an elderly and widowed matriarch who goes missing, and her daughter Kay and granddaughter Sam who must travel to their remote family home to find her. Soon after her return, they start to discover sister presents hunting the house and taking control of Edna.” Running a smooth 90 minutes, Relic ventures proudly into a modern gothic landscape draped in a fluid, decayed aesthetic.

The first part of James’ film finds Kay and Sam sifting through Edna’s belongings allowing viewers to walk alongside the women as they observe the elder’s living situation. As Relic progresses, viewers witness the happenings that plague Edna, ones that could be the result of her waning mind and others that are of a more sinister element. Defying what could have been a predictable third act, Relic enters a macabre end that ultimately weaves horrifying, but organic obligation through the ever-evolving vicious cycle of life. A House Is A Home…

For a film locked mostly within the confines of Edna’s home, Relic is charged with intrepid movement. The old woman’s home is tangible, familiar almost, filled with knickknacks and pieces collected over the course of her life. The setting holds memories, quite literally, from the indentation of furniture into the carpet to transforming into a surreal labyrinth built on impressions from the past. The house turns into an old claustrophobic maze aiding with heightened tension as the more relaxed second act spirals into a consuming finish. Natalie Erika James capitalizes on the long dimensional angles as well as the interesting wide shots forged by cinematographer Charlie Sarroff (Creswick) to expand on the close setting inhabited by the characters. A skilled sharpened focus draws the eye even when confusion and chaos gain control of the viewpoint. Edna’s home becomes a subtle character and a productive piece to mobilize the plot, a magnificent effort made on James’ part to further convey Relic’s purpose.

Cyclical shots and chilling frames gives Relic a somewhat gothic style in addition to the inundated decayed aesthetic. Practical techniques are woven within thematic overtones as dread builds steadily. Certain colors are embraced while the rest of the palette remains neutral and partially subdued creating moody, contemplative scenes. Sound plays a significant role in developing the tension as each jump scare is earned. The unsettling soundscape enhances the lurking terror that is taking over Edna, breaking down Kay, and trapping Sam. The power of inherent love and responsibility overcomes duplicitous evils in an ideal fashion that inspires moments of effective synchronicity, finding a home in parental relationships. Care is represented in an ominous repetitive whole throughout Relic, from the structural bones of the film to the lighting, and it is substantially manifested in well executed frights. James has found a compelling way to not only speak to the never-ending, torturous effects of aging but produce it in a valuable narrative. Relic evokes this raw horror that presents itself as a simple haunting agent, but represents an active harbinger of natural fear brought out by endearing performances and valiant visual effects. Natalie Erika James and Australian author Christian White’s comprehensive screenplay breeds dialogue that is clipped, but penned with caution and intention. The bleak tone pokes and prods at a wrenching melodrama that touches on the fragility of a very human journey set within a ghostly mystery. Robyn Nevin, Emily Mortimer, and Bella Heathcote all provide consistent performances across the board, each bringing an emotive layer of demonstrative subject matter to their respective parts. They are exceptionally average, grounding a very solid relativity to their functional roles. While the film hosts a collection of eerie scares and one severely outré ending, it maintains a malleable portrait of familial horror. Exposition is fairly applied without forcing objectively preconceived notions as to what Relic is truly trying to embody. Allowing viewers to pull the pieces together through quality storytelling and three relatable women, Relic plays into expectations briefly before spinning the narrative into more unconventional matters.

A series of scares, ranging from necessary jumps to prolonged treatments, give Relic an empowering spike of fright. Relic stands confident in uncomplicated scares that are more appropriate for its slowly evolving appeal for the most part, but is accomplished when it comes to burying itself under the skin. Daunting from the beginning, the film hits every nerve and key in all the right places as it gently introduces grotesque and gruesome properties. The obscure symptoms of Edna’s aging and the puzzling environment of her home preserve the menacing motives of a haunted house tale, complete with possessive behavior, shadowy entities, and creeping intensity. When the flesh is peeled back and Relic’s waxing meaning takes hold, the imagery is expressly magnificent. The special effects, especially those pioneered come the third act, are commendable to say the least. The impeccable coup and physical application of the more horrific visuals of the film are two noteworthy factors that contribute to Relic’s overall allure. Dying Is An Art…

Relic brilliantly captures that uncomfortable, sobering feeling of sentiment. Engaging an emotionally nuanced foundation solidifies the film’s basis in a strange, dreamy reality that finds the supernatural in the actual. As the relationships between mothers and daughters are drawn through true generational turmoil, a haunting presence takes over the family’s eldest matriarch. Kay grapples with the harsh reality of parenting her parent and her mother’s eventual disposal as Sam eagerly forfeits her time to commit care to her grandmother. Edna herself denies the effects of her aging, culminating in a severely empathetic character study that passes a heavy air of sympathy from woman to woman. Relic elevates the complexities that coexist between mothers and daughters as women. The sides and cycles of life play a significant role in the happenings within Edna’s home and sensitively enhance the levels of empathetic pathos applied to the more horrific factors at play.

The passing down of belongings, the helpless intentions, and the despair of loneliness all drive Relic’s poignant plot and ultimately strikes a chord carved from natural affliction. The longing and undeniable terror slowly stews as two women not only pick up the pieces of a loved one, but prepare for the unspoken inevitable. Well-placed mechanics bring together a meaningful catharsis that pays due to the film’s long-time push toward a stunningly suspenseful endgame. Relic joins a slew of modern horror pieces that have managed to pull off a stellar third act complete with an ending that sticks its landing. Upsetting and unsettling, Relic’s final moments are incredibly shocking. Comprehending the film in totality while taking in the daring scenes is a devastating, but impressive experience. All of the motifs and metaphors at large work in a beautifully bizarre synchronicity that allows the heartbreak and horror in Relic to unfold in tremendous triumph.

My single concern for Relic is that comparisons may be made against Ari Aster’s (Midsommar) tremendous familial cult horror, Hereditary. It is a comparison I am guilty of initially drawing myself, but found that to be an unfair judgment. The content of both may be generationally driven, but the plot and style are intrinsically different. Relic is not Hereditary and it does not intend to be. James’ introduction to the genre is incredibly strong as Relic establishes the director’s talent to navigate meaning through entertainment with an impressive eye and heart. I am seldom taken by surprise, especially when it comes to an ending, but that grandiose third act exposed emotions I never expected to experience while watching a horror film. So much of Relic speaks to James’ ability to illustrate the innate core of horror in the supernatural and in reality, as well as that strange space in between. Both the horror and beauty of Relic lies in its universal resolve that reverence is deeply concealed in the behaviors we inherit, the responsibilities we inherit, the memories we inherit, and the fate we inherit.

What are your thoughts on Natalie Erika James’ Relic? Does this generational horror strike personal nerves? How do you feel about the film’s ending? Let us know your thoughts over on Twitter, Reddit, or in the Horror Movie Fiend Club on Facebook! 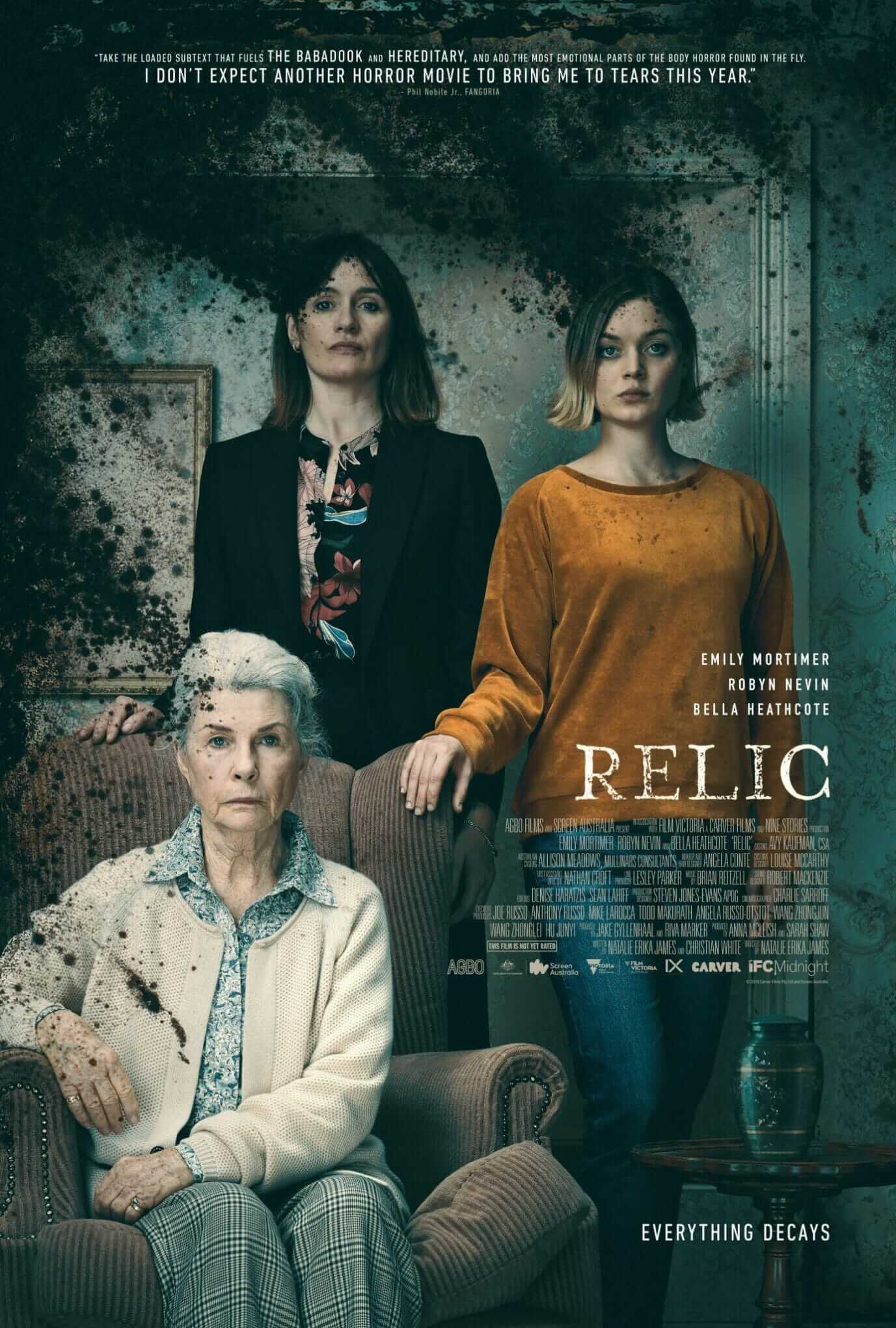 TLDR James' introduction to the genre is incredibly strong as Relic establishes the director's talent to navigate both meaning through entertainment with an impressive eye and heart. I am seldom taken by surprise, especially when it comes to an ending, but that grandiose third act exposed emotions I never expected to experience while watching a horror film. So much of Relic speaks to James' ability to illustrate the innate core of horror in the supernatural and in reality, as well as that strange space in between. Both the horror and beauty of Relic lies in its universal resolve that reverence is deeply concealed in the behaviors we inherit, the responsibilities we inherit, the memories we inherit, and the fate we inherit.