It’s been a busy week for slasher fans with not one, but two bold re-imaginings of classic franchise favorites. First, of course, was David Gordon Green’s Halloween Kills, which has taken the Michael Myers mythos into murky waters for an often heavy-handed dialog about the destructive nature of trauma. And while horror fans were watching Mikey hack and slash his way through movie theatres across the land, director Danishka Esterhazy (The Banana Splits) threw one hell of a grisly party for the SYFY crowd with her modern adaptation of Slumber Party Massacre.

Over the years the Slumber Party Massacre films have been (wrongfully) accused of delivering a misogynistic message and glorifying violence. Esterhazy’s cinematic remix overcorrects a little too far when addressing the legacy of its prior films, but it still serves up one hell of a sleepover slasher filled with fun kills, silly banter, and more than one clever plot twist for diehards obsessing over the original story beats. 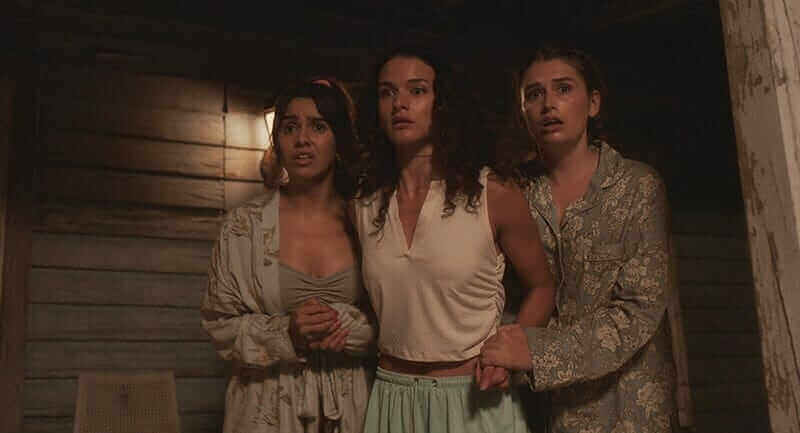 No slumber party (or slumber party masacre for that matter) has ever been improved by having parents around. Dana’s (Hannah Gonera) mother Trish (Schelaine Bennett), the lone survivor of the Russ Thorne (Rob van Vuuren) a.k.a. The Driller Killer’s previous attack, doesn’t leave the house much these days, forcing the girls to rent a remote cabin far away from an adult oversight. But surprise, surprise- they’ve found themselves vacationing in the believed-to-be-dead Driller Killer‘s hunting grounds.

Miles away from anything resembling help- with the exception of a cabin full of suspicious/attractive boys so usefull and essential to the girl’s survival that a pair of them are hilarious named Guy 1 and Guy 2- the girls set out for a night of unsupervised fun. The first two thirds of this b-movie update go exactly as planned. Throats are slashed, eyeballs are drilled out, and a healthy amount of pizza is eaten (slumber party essential). Like any exciting chess match, the opening moves can be traced back to legendary games played by world-renowned players, but at a certain point the match is off book and anything can happen. You will think you have predicted every beat of this loyal remake until you realize that you’ve only covered the first half of the movie, and it’s in that midpoint surprise turn that Slumber Party Massacre (2021) becomes something entirely it’s own. 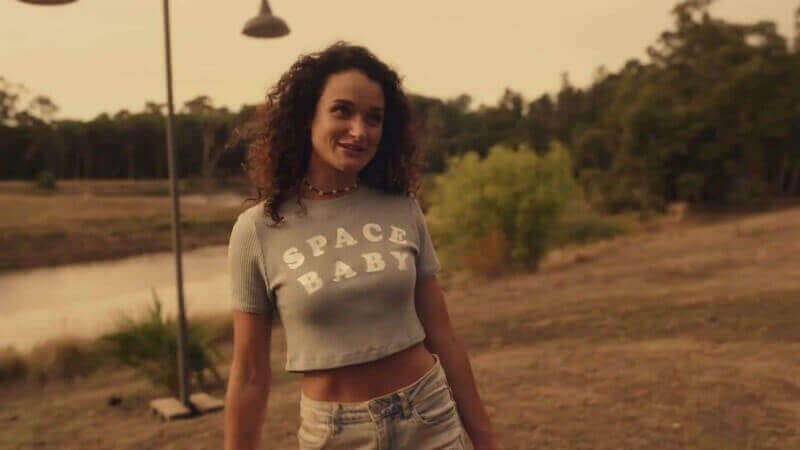 An argument could be made that Slumber Party Massacre (1982) is the first meta-horror movie. You’ll find no one referring to themselves as “Final Girls” or warning their friends about following “The Rules” to survive, but those movies always understood what was expected of them, and delivered the goods with a self-aware grin. And while those movies were always conscious of their tropes and trappings, Slumber Party Massacre (2021) is fully aware of its legacy. It leans in to every positive and negative response the films have received over the years, while still churning out flick that is as much for the 2021 horror fan as it is for their 1982 counterpart.

If you’ve long complained about the male gaze in horror, you will find a decidedly different approach in Slumber Party Massacre (2021). It should probably come as no surprise too that it also follows a fairly conventional approach to discussing trauma. If women’s bodies and their bloodied corpses were a cornerstone of exploitation film, our generation of horror creators have found an untapped resource in modern psychiatry’s understanding of trauma to exploit for character motivation and catharsis. While this is by no means the most heavy-handed presentation of the subject, it still makes large chunks of dialog sound copied + pasted from the genre’s updated manual of how to present mental disorders on screen. 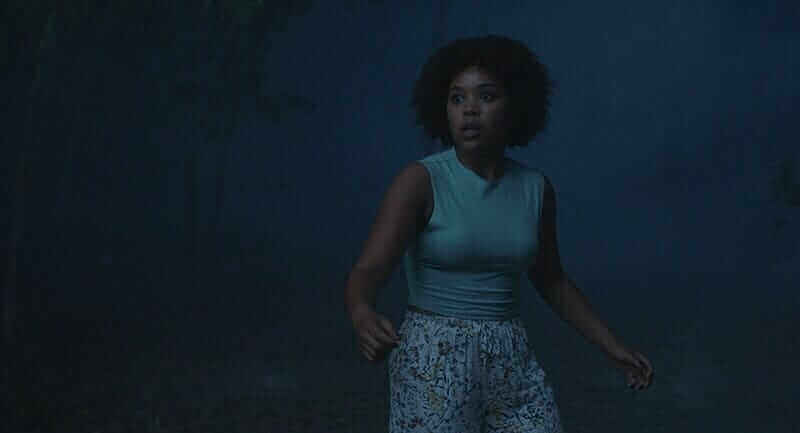 Any Slumber Party Massacre film is at its best when it’s just a group of girls fighting a sadistic, psycho-sexual murderer (whether they be leather bound and supernatural or covered in denim and unsurprisingly human). When our new cast is riffing on their origins, it’s a rockin’ good time. The finale is unapologetically chaotic but the back half still boasts a handful of inventive kills and new takes on classic tropes. Not to mention a final girl showdown that may take itself a little too seriously but understands how to serve legacy and lore in the same greasy delivery box.

There is no such things as bad pizza, and the same can be said about slasher flicks. The world has come a long way since 1982, but Danishka Esterhazy’s Slumber Party Massacre (2021) keeps the ingredients that make the sauce of this subgenre so entertaining without letting the new toppings overpower the experience.

“Slumber Party Massacre (2021) keeps the ingredients that make the sauce of this subgenre so entertaining without letting the new toppings overpower the experience.”

Danishka Esterhazy’s Slumber Party Massacre (2021) premiered on SYFY October 16th. Be sure to let us know what you thought of this updated slasher classic, and what you would do if a killer was trying to ruin your sleepover on Twitter, Reddit, Facebook, and in the official Nightmare on Film Street Discord. Not a social media fan? Get more horror delivered straight to your inbox by joining the Neighbourhood Watch Newsletter. 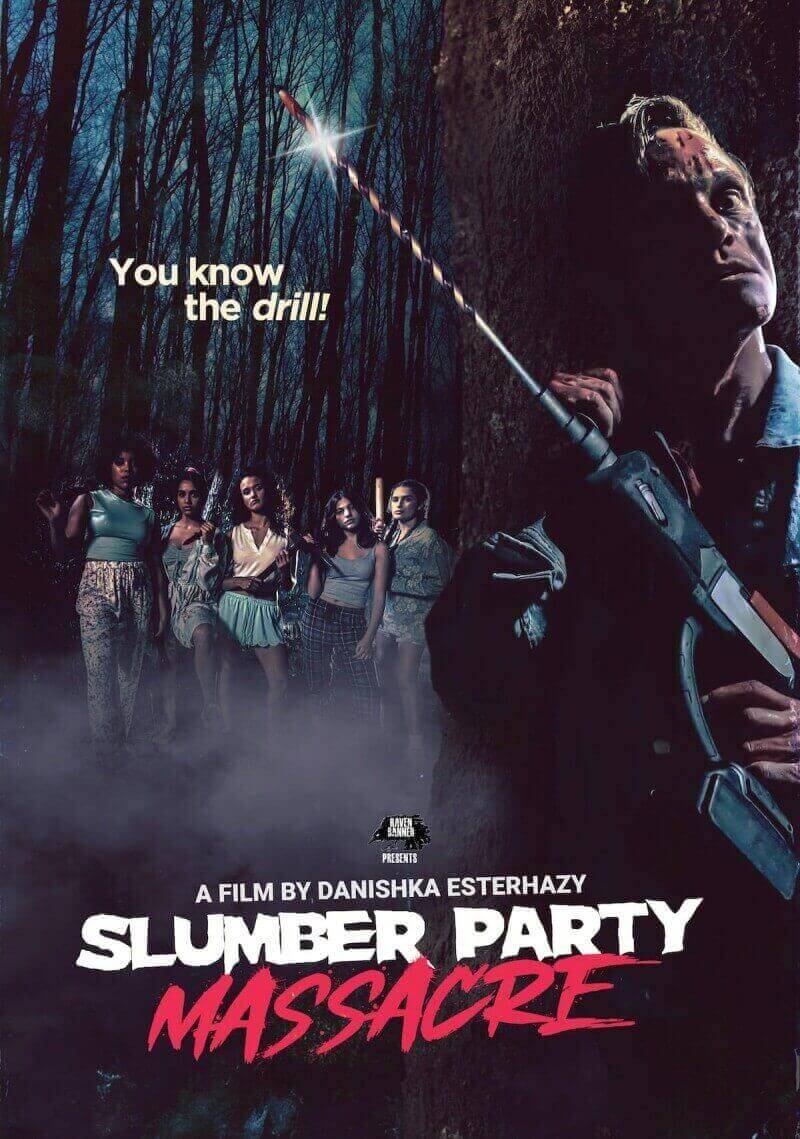 TLDR There is no such things as bad pizza, and the same can be said about slasher flicks. The world has come a long way since 1982, but Danishka Esterhazy's Slumber Party Massacre (2021) keeps the ingredients that make the sauce of this subgenre so entertaining without letting the new toppings overpower the experience.