Twenty-five years after the original, Matt Bettinelli-Olpin and Tyler Gillett’s Scream begins the journey of a franchise no longer helmed by the late Wes Craven or written by the legendary Kevin Williamson. The term “re-quel”, in fact, is thrown around several times by the new film-buff youth of Woodsboro, the classic meta way of defining what this new Scream is for those viewers who are unsure.

Blending bits and pieces of Wes Craven’s original film with new characters, it’s clear from the start that this entry’s intention is to serve as a launchpad for a whole new generation of Ghostface fans. Those of us who’ve witnessed other beloved franchises attempt a similar maneuver know balancing enough of the “old” with the “new” is a real tight-rope walk across a pool filled with sharks. So the question is, does Scream (2022) satisfy the long-tenured fans of the franchise while also drawing in new audiences?

“…Scream delivers plenty of laughs and holds a blood-stained mirror to the horror genre.“

Scream returns us to the hallowed ground of Woodsboro, California 25 years after the events of the original film. A home invasion by the Ghostface killer leaves the young Tara (Jenna Ortega) badly wounded but alive. Informed of the attack, her estranged sister Sam (Melissa Barrera) returns to their hometown with her boyfriend Richie (Jack Quaid). Knowing the killing has just begun, the two seek the help of the only one around town with a pedigree in surviving the Ghostface killer- Dewey (David Arquette).

As the killer (or killers?) gets closer and closer to their injured target, she must do all she can to protect her sister and her group of friends from danger. However, Sam has her own dark secrets, and could instead be leading the high schoolers to their grisly end like lambs to slaughter. Not all ghosts of Woodsboro are evil, fortunately, as two familiar faces return to aid in the fight to send Ghostface to the grave once and for all.

Above all else, Scream (2022) serves as a wickedly blunt litmus test of what the rest of the franchise means to you. Did you enjoy the previous entries? Do you have an attachment to the story arc across the four prior films? Is the meta nature Scream is known for the main draw for you?  However you answer these questions, (and they will be answered by the film’s end) will likely have a profound impact on your overall opinion of the film, as it certainly did for me.

If meta-horror is the name of your game, Scream delivers plenty of laughs and holds a blood-stained mirror to the horror genre. Many of the punches are packed for the “elevated” horror film crowd, in what felt like the entire A24 film catalog getting name-dropped in hilarious fashion.

The timeliness of the subject matter could not be more spot-on, as some rabidly devoted fans of classic franchise’s first films (“cough” Halloween ’78 “cough”) find themselves on the receiving end of the social commentary roast. The subplot of the fictional Stab 8 officially “jumping the shark” delivers the funniest bit in Scream, complete with a YouTube commentator tearing apart several of its scenes. I told you it was timely.

“If your fandom of Scream is deeply rooted in the Sidney Prescott story built across the four previous films, Scream (2022) is going to hurt.”

Those who are fans of Wes Craven’s directorial work will find a great deal to like from this. It’s clear that Bettinelli-Olpin and Gillett heavily studied Craven’s films and emulated his style to the very best of their ability. In addition, callbacks and Easter eggs are littered throughout Scream, adding just the right about of respectful feel-good recollection. The attention paid to the Ghostface killer’s mannerisms, particularly his/her clumsiness from a constant pummeling delivered via any nearby object the victim can reach, plays like the character walked off the set of any previous Scream and onto this one.

If your fandom of Scream is deeply rooted in the Sidney Prescott story built across the four previous films, Scream (2022) is going to hurt. There’s really no sugarcoating the fact that Kevin Williamson’s writing is sorely missed, especially after becoming so comfortably accustomed to it. Perhaps the biggest sin of the film, the legacy characters’ importance doesn’t extend much further than plot device pawns intended to hand off the baton to a new generation of unlucky Woodsboro teens. From dialogue to decision-making, nothing really feels right with them, a sort of betrayal to the lore they built over 25 years. 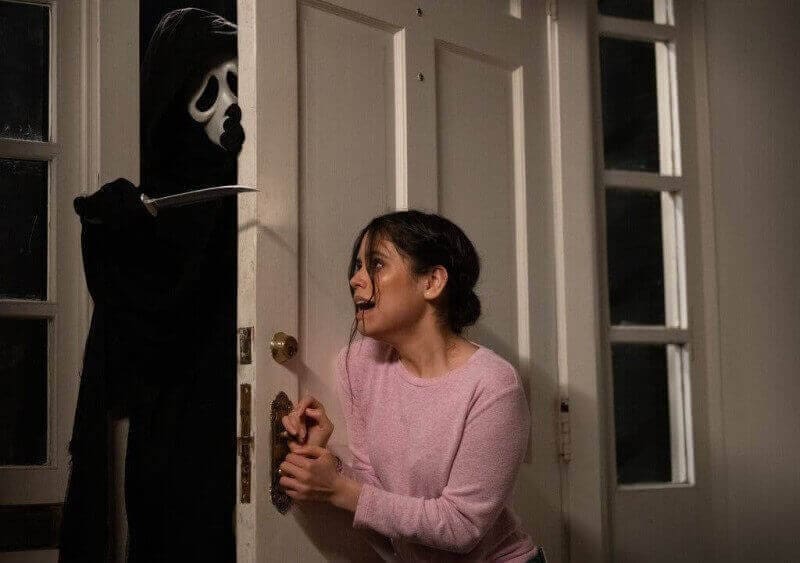 As for the new characters, while entertaining, it’s difficult to label any of them as compelling enough to be memorable, with the exception of Jasmin Savoy Brown’s portrayal as Mindy Meeks-Martin, the niece of Randy Meeks. A Meeks through and through, Savoy Brown nails what it means to be a tried and true film geek in the Scream universe, joining the ranks with Jamie Kennedy and Timothy Olyphant.

Even though the absence of Williamson’s touch leaves Scream feeling hollow, the writers dropped…something…phenomenal into the plot that fans will always remember this entry for. Without walking too deep into the muck of spoilers, the “dark past” that follows Sam back to Woodsboro, and how it’s presented, uniquely defines the film from its predecessors. A compelling plot device, this new wrinkle in the world of Scream leaves you wishing it was incorporated more heavily rather than simply tethering the old world to the new. That said, if this series continues forward, there’s an awful lot of potential at future filmmakers’ fingertips.

“…the legacy of Ghostface and the signature meta nature of the franchise press on, life anew in Scream.”

As either a reboot or remake or sequel or re-quel or what have you, the legacy of Ghostface and the signature meta nature of the franchise press on, life anew in Scream. Whether a new generation will gravitate towards Woodsboro, or if the old guard can find it within themselves to walk the path of a Craven/Williamson-less Scream, remains to be seen. I think we can all agree how good it feels to be asked, at least once more, “What’s your favorite scary movie?”.

What did you think of Matt Bettinelli-Olpin and Tyler Gillett’s Scream? Where does it stand in your overall franchise ranking? …what’s your favorite scary movie? Let us know over on Twitter, Reddit, Facebook, and in the official Nightmare on Film Street Discord. Not a social media fan? Get more horror delivered straight to your inbox by joining the Neighbourhood Watch Newsletter.

TLDR As either a reboot or remake or sequel or re-quel or what have you, the legacy of Ghostface and the signature meta nature of the franchise press on, life anew in Scream. If your fandom of Scream is deeply rooted in the Sidney Prescott story built across the four previous films, Scream (2022) is going to hurt but it's clear that Bettinelli-Olpin and Gillett heavily studied Craven's films and emulated his style to the very best of their ability.

The Ghosts of Woodsboro

New Kids on the (Chopping) Block