The horror genre has always been unparalleled in how it handles trauma, but even Alex Noyer’s first feature film Sound of Violence feels like an aberration among its peers. This extension of Noyer’s short Conductor tells the origin story of a sound engineer named Alexis (Jasmin Savoy Brown); her method of regaining her diminished sense of hearing soon leaves a trail of dead bodies in her wake.

As a child, Alexis fully regained her hearing after witnessing her father kill her mother and brother. The ordeal stirs up synesthesia as well as sets her on a dangerous path. Years later in college, her unorthodox research into unique sounds — specifically those of violence — becomes the trigger for murder. Alexis is at risk of losing her hearing again, and she realizes the remedy is inflicting undue pain upon others. In the meantime, her friend’s boyfriend (James Jagger) and a detective (Tessa Munro) are both suspicious of Alexis and her possible ties to the mutilated corpses popping up all around the city.

Although Sound of Violence expands upon the sheer brutality so readily dispensed by the protagonist, how Alexis reached that point of absolute cruelty is too impetuous. Noyer leaps when he could have been walking. Cultivating a killer’s origin deserves more structure and less shortcuts. By that, adult Alexis is so ready to commit homicide you will undoubtedly ask for an instant replay of where exactly she decided to straight-up murder people for personal gain.

It’s evident in the flashback Alexis was acting on pure instinct; the unexpected reward for defending her family from her father was her restored hearing. Yet now for the older Alexis to immediately determine murder is a cure-all without the necessary exposition or current logic to support that choice, doesn’t add up. There is no on-screen contemplation or internal dialogue in the present storyline to consider other than the flashback. It’s so bewildering, one might ask if a crucial scene was cut. Be that as it may, a little more attention to the journey from point-A to point-B would have repaired some glaringly shorthanded character development.

It’s easy to believe Alexis as a genius when it comes to sound engineering, but now she’s also a near expert-level spree killer who can construct elaborate torture devices on the fly. Once again, where did this aspect of her character or talent come from? We’re easy on the short film because revealing Alexis to be some kind of Jigsaw wannabe without explanation can be just as amusing as it is surprising. For such a grave movie, though, viewers might notice whatever sticks out or doesn’t quite gel with everything else.

On the other hand, gore enthusiasts will eat up the grislier parts of Sound of Violence. Alexis is no half-hearted sadist; she goes the extra mile when making certain her victims suffer as much pain as humanly possible. The squeamish will be sick to their stomachs as the seemingly reserved Alexis ensnares her targets with false kindness or simple monetary reward, then torments them using absurd and convoluted kill methods. Her pièce de résistance in the last act doesn’t make entire sense from a mechanical standpoint, but Noyer never throws in the towel.

Flawed character construction and Alexis‘ sudden penchant for torture crafting aside, what disappoints the most is the movie’s indistinct endgame. Sound of Violence feels undercooked from a narrative point of view. If you had to make a guess, this is a movie about generational trauma and how violence can beget violence. Unfortunately, those themes get lost along the way. On the plus side, at least two of the garish death scenes will remain seared in your brain, Brown and Lili Simmons (Marie) hand in fine performances, and the colorful and surreal visual effects for Alexis‘ synesthesia are stunning. It’s regretful everything else here rings hollow.

Alex Noyer’s Sound of Violence celebrated its World Premiere at the 2021 SXSW Film Festival. Click HERE to follow our full coverage of the festival and be sure to let us know if you’re excited to check out this gory, colorful horror over on Twitter, Reddit, Facebook, and in the official Nightmare on Film Street Discord. Not a social media fan? Get more horror delivered straight to your inbox by joining the Neighbourhood Watch Newsletter. 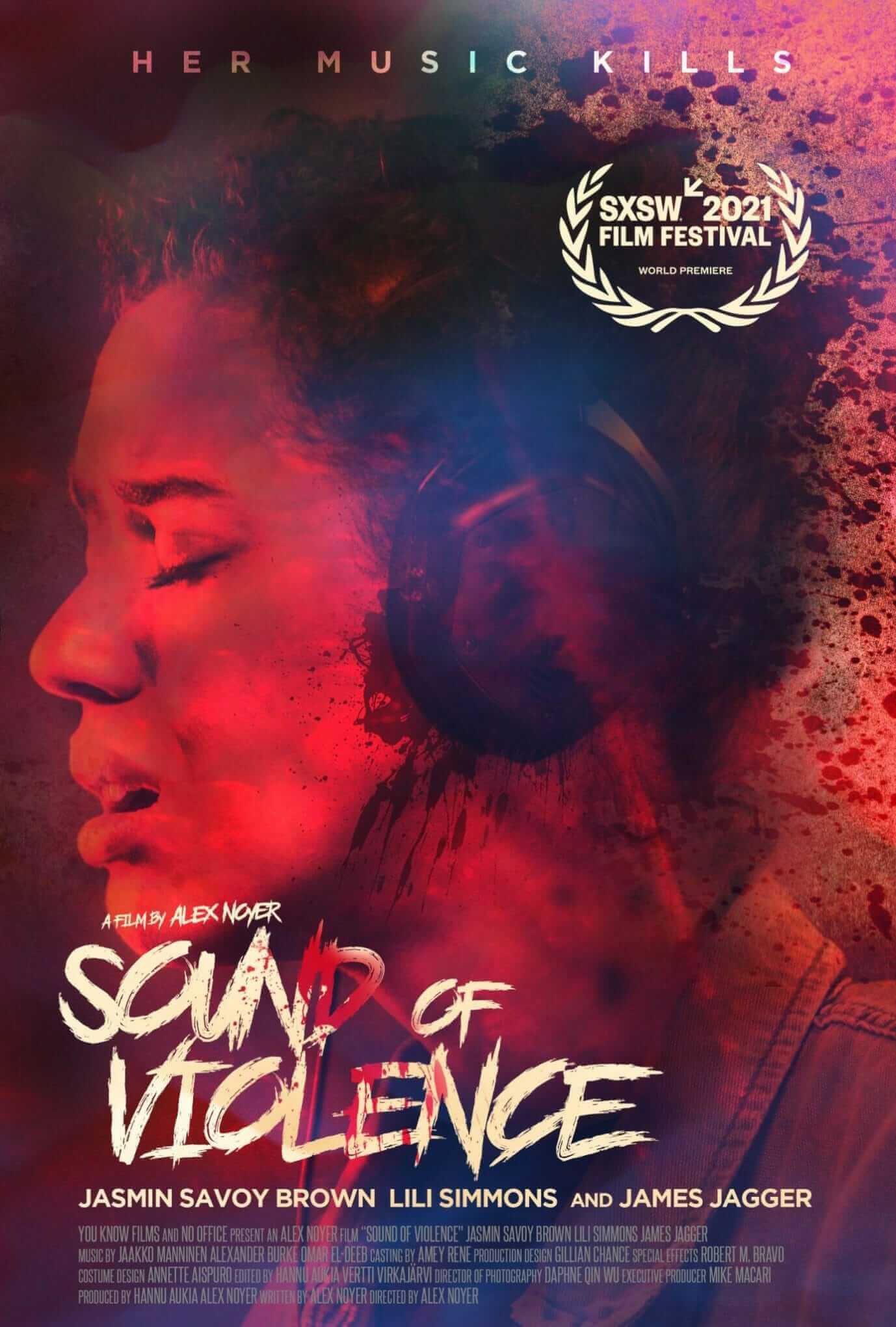 TLDR A little more attention to the journey from point-A to point-B would have repaired some glaringly shorthanded character development. Flawed character construction and Alexis' inexplicable penchant for torture crafting aside, what disappoints the most is the movie's indistinct endgame. Sound of Violence feels undercooked from a narrative point of view. On the plus side, at least two of the garish death scenes will remain seared in your brain, the leads hand in fine performances, and the colorful and surreal visual effects for Alexis' synesthesia are stunning. It's regretful everything else here rings hollow.