Following up on the success of quirky Groundhog Day-inspired slasher Happy Death Day (2017) and it’s quantum follow up Happy Death Day 2U last year, writer/director Christopher Landon and Blumhouse have teamed up again to slice up an iconic film concept with positively horrific results.

Things are about to get Freaky as they take on the classic ‘body swap’ conundrum. Akin to films like the Jamie Lee Curtis/Lindsay Lohan family comedy Freaky Friday and Rob Shneider romp The Hot Chick, Freaky stars Vince Vaughn and Kathryn Newton as an outcast teen girl and an outcast backwoods killer who are be forced to walk a mile in each other’s shoes after an attack goes haywire.

Landon is no stranger to the Blumhouse model. Even before the Babyface killer slashed Tree Gelbman again and again and again, Landon cut his teeth in the industry serving as writer for the endlessly lucrative horror honeypot known as the Paranormal Activity franchise; penning part 2, 3, 4, and finally earning the coveted director’s chair for the fifth entry, Paranormal Activity: The Marked Ones. This relationship only blossomed further after the success of Happy Death Day, solidifying Landon as Blumhouse’s go-to ‘quirky, off-beat originals’ creator.

Millie (Kathryn Newton, Big Little Lies) is your regular, everyday outcast. Adorable, sweet, kind, and ruthlessly dunked on by all of the popular boys and girls in school. Her life takes a spin after her mother, distracted and poorly dealing with the death of Millie’s dad, forgets to pick her up after a football game. Alone and dressed as the school’s mascot, Millie faces off with the Blissfield Butcher (Vince Vaughn), who capitalizes on the lonesome vulnerable girl as an opportunity to hook another notch on his slasher belt. 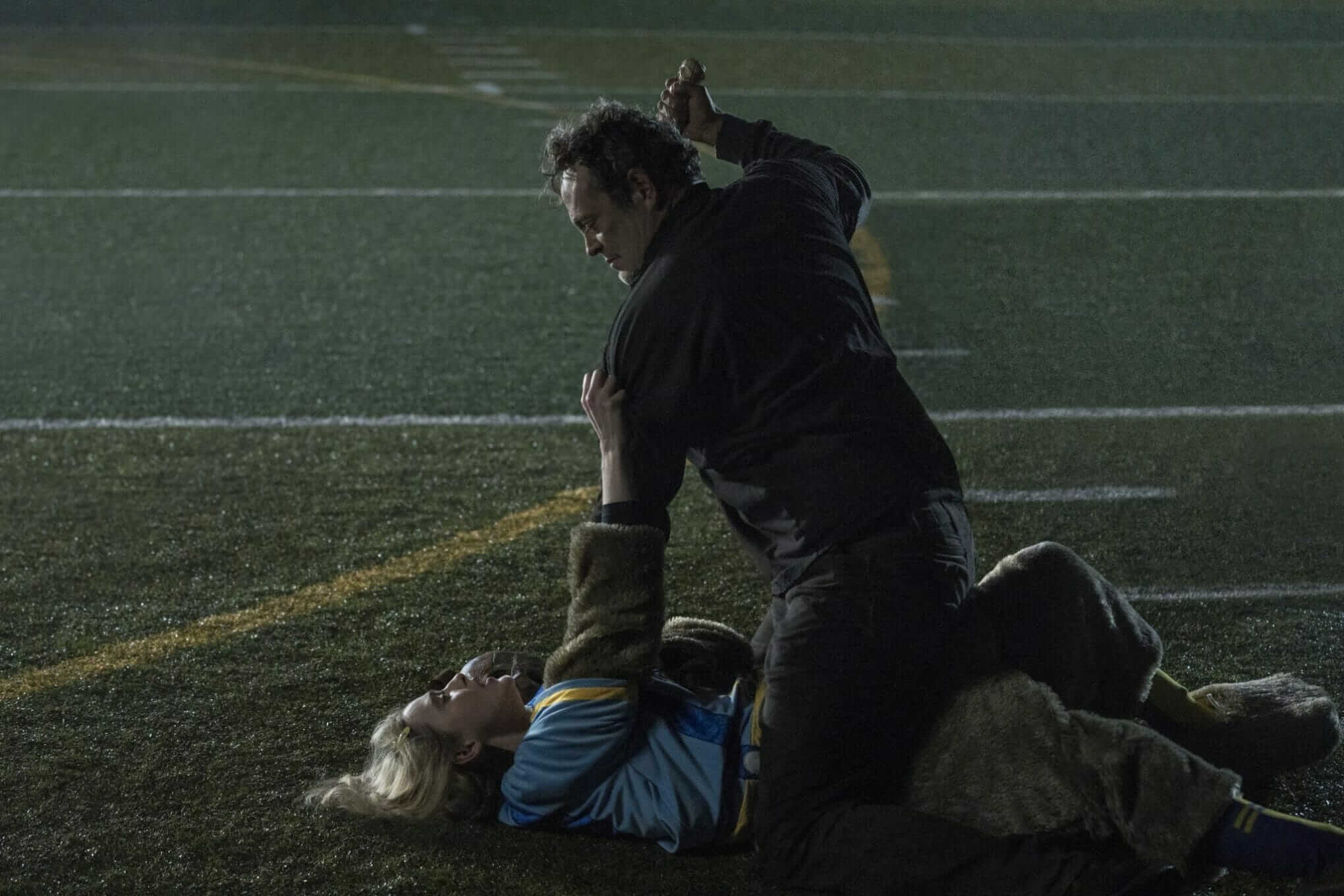 Armed with some new tools picked up in the slasher-trope-filled cold open; a historical mask of maybe-importance and a dagger that’s got some Ancient Magical Voodoo properties, The Blissfield Butcher stalks the hilariously inept Beaver mascot through the school grounds before ultimately pouncing on his victim. But instead of murdering poor Millie, that drast dagger instead swaps the two of them into each other’s bodies. And hijinks ensues.

Now a wolf in sheep’s clothing, The Blissfield Butcher (now in Millie) continues his reign of terror by hacking and dicing her way through the student body. Meanwhile, actual Millie, (hilariously stuck in the 6″5 body of Vince Vaughn’s Butcher) needs to stop her own body’s reign of terror without getting sighted by law enforcement. 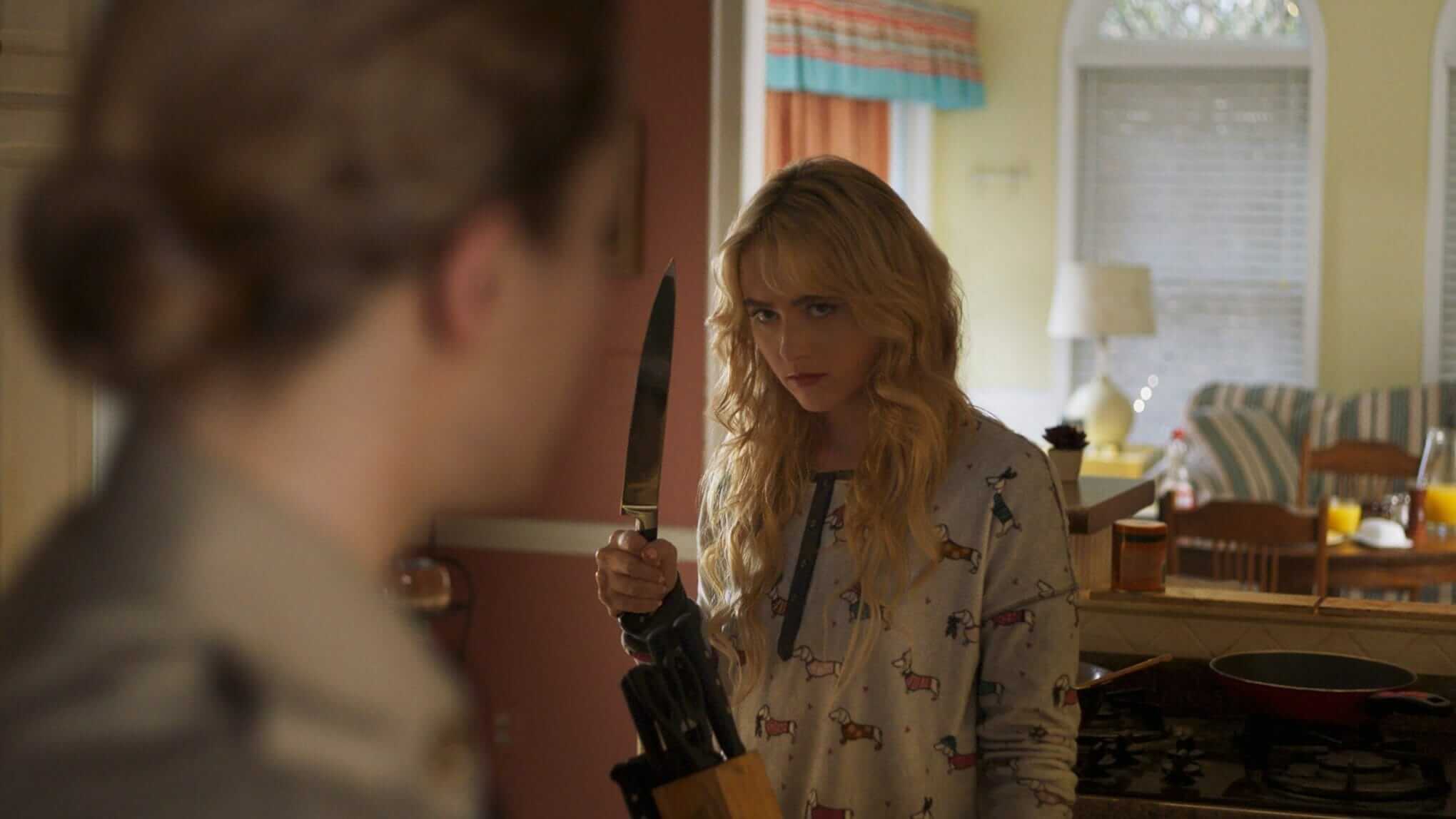 Freaky is a fun romp of horror misadventures. It delivers slashtastic fun with unique, jaw-dropping kill sequences that stay fresh throughout, and turn out be surprisingly graphic giving Blumhouse’s history of keeping things relatively pg-13. (Keep your eyes open for a wild comeuppance to Blissfield’s Carpentry teacher, played by Ferris Bueller’s Day Off favorite Alan Ruck.) Blumhouse originals typically seek to garner a younger horror audience, and though Freaky is definitely targeting teens, there are plenty of homages and nods to deep cuts in the genre for the seasoned horror fan. While the Butcher primarily emulates the rigid, relentless, and not-so-wordsmithy Jason Voorhees a la Friday the 13th, he definitely grew up with a VCR and copies of Sorority Row, Child’s Play, and other 80s classics.

Kills aside, Freaky’s shining star award goes to Vaughn, who spends the majority of the film portraying a shy and awkward seventeen-year-old girl. Vaughn finds the humor in the uncomfortable moments without playing down and slapsticky with the role. His sheer size and gait keep the chuckle level high, and weirdly, when teamed up with Millie’s bffs Nyla (Celeste O’Connor) and Josh (Misha Osherovich), you almost forget you’re watching a 50-year-old man. 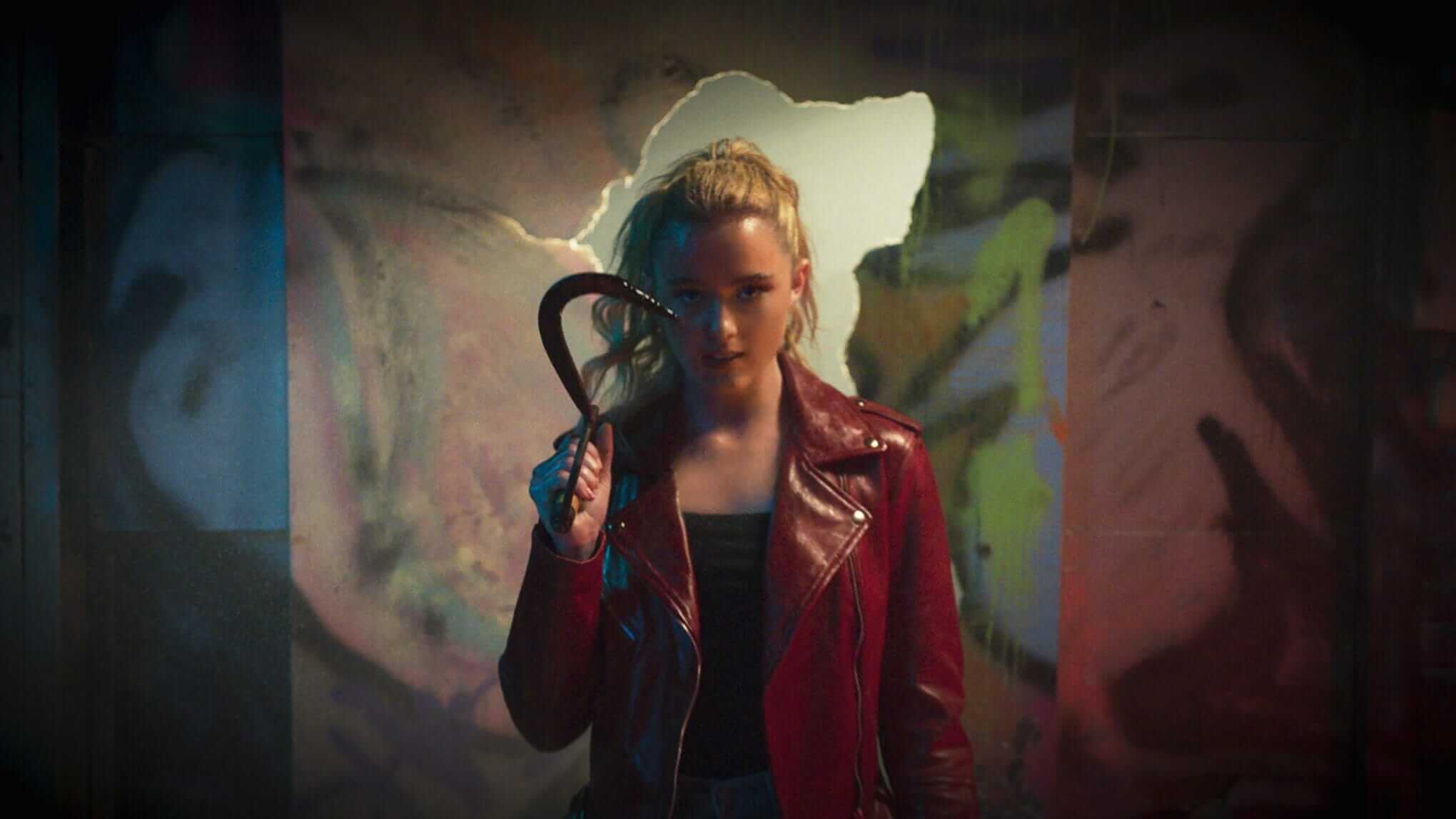 Fresh face Kathryn Newton is positively toothache-worthy as the sweet and sad Millie, but becomes lost once forced into the somehow-muddled stoic and sinister Butcher. Though badass in red leather, lipstick, a high pony, and occasionally brandishing a chainsaw, Butcher-Millie opts to keep things quiet, rarely giving Newton much to do other than flash a menacing brow. We get a few great lines and trailer-worthy moments, but she otherwise remains status quo. It would have been great if we got to see the Blissfield Butcher’s cogs turning with a little more depth, because once in Millie’s body, the killer continues slicing and dicing without much care (though strangely only disposing of the baddies and school bullies), not really using this as an opportunity to change course or actually hide in plain sight. The bodies pile up pretty quick, and it wouldn’t be long until Butcher’s Millie got caught at the center of it all.

As is custom, you can’t have a body-swap without a character revelation, so poor Millie is sometimes pulled through the emotional wringer to try and secure some emotes from the audience. These heartstrings scenes steal from the more hi-tension kills and quirky hijinks of the premise (I would trade me ten minutes of Mom being sad for ten more minutes of Millie-in-the-Butcher discovering her lair), but fortunately, the film zips along, refusing to let us get comfortable in a setpiece; whisking us off to a mini-putt, quasi-rave, or small-town police station lest we ever dare get bored.

Freaky is fresh, flashy, and the perfect flick for a horror night spent screaming along with friends. The kills are unique and inventive, and the role-reversal puts Vince Vaughn in the spotlight, hilariously portraying an awkward teen girl. Though pretty formulaic and delivering some sometimes forced emotional moments, the film zips along too quickly to dwell.

“Freaky is fresh, flashy, and the perfect flick for a horror night spent screaming along with friends.”

From Universal Pictures and Bluhouse Productions, Christopher Landon’s Freay hits theatres Friday, November 13th, 2020. Let us know how hard you laughed at this gory high school horror over to Twitter, Reddit, or in the Horror Movie Fiend Club on Facebook, and get more horror delivered straight to your inbox by joining the Neighbourhood Watch Newsletter. 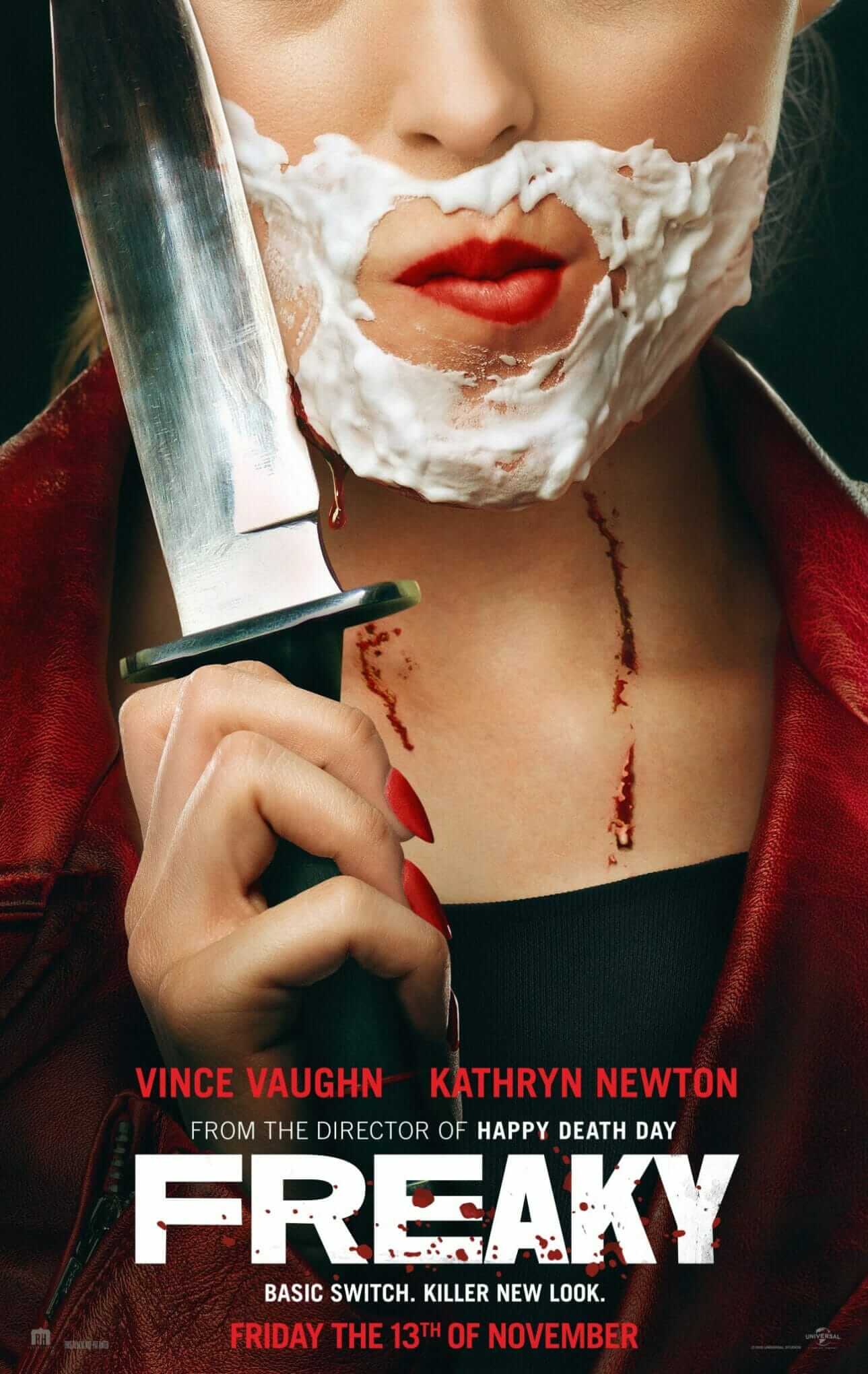 TLDR Freaky is fresh, flashy, and the perfect flick for a horror night spent streaming and screaming along with friends. The kills are unique and inventive, and the role-reversal puts Vince Vaughn in the spotlight, hilariously portraying an awkward teen girl. Though pretty formulaic and delivering some sometimes forced emotional moments, the film zips along too quickly to dwell.