[Screaming in Harmony] LITTLE SHOP OF HORRORS is the Best Movie Ever Made! 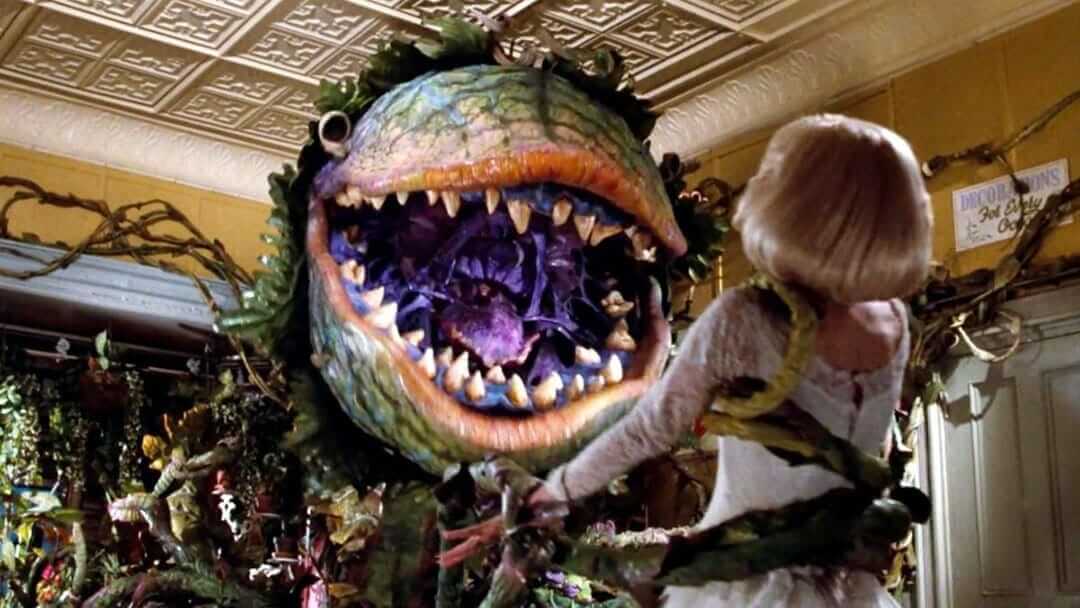 The house lights have gone low and there’s an ominous drumroll on the timpani, which can mean only one thing: it’s time for Screaming In Harmony! Each month we’ll take a look at a musical for the bloodthirsty, and we’d love it if you sang along!

In line with this month’s intergalactic theme, No One Can Hear You Scream, tonight’s show is the story of a boy, a girl, and a carnivorous plant from beyond the stars. It’s funny, bloody, and features some of the best songs in the off-Broadway canon. Tonight’s presentation is Earth’s greatest movie, Little Shop of Horrors. 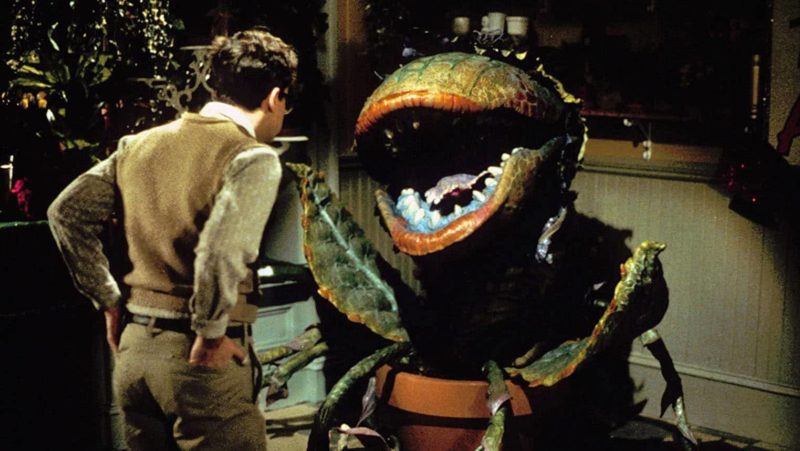 There are a lot of things named Little Shop of Horrors, but this article is specifically about the 1986 film version directed by Frank Oz. While he’s best known as Jim Henson’s chief conspirator (and, as such, the voice of beloved characters like Yoda, Cookie Monster, and Miss Piggy), Oz is certainly no slouch behind the camera. Led by Rick Moranis as the downtrodden but good-natured Seymour Krelborn, Ellen Greene as his crush Audrey, Steve Martin as her no-good boyfriend Orin Scrivello, DDS, and Levi Stubbs as Audrey II, the bizarre little plant that changes Seymour‘s life forever, the 1986 film is the third project to go by this name.

The original Little Shop of Horrors was a no-budget Roger Corman feature from 1960, otherwise-notable for its casting of a young Jack Nicholson. This film was adapted into the stage musical Little Shop of Horrors by Alan Menken and Howard Ashman, a duo best known for Disney’s The Little Mermaid and Beauty and the Beast. Their 1982 musical is the basis for Oz’s film version, with some changes to the script and songs. 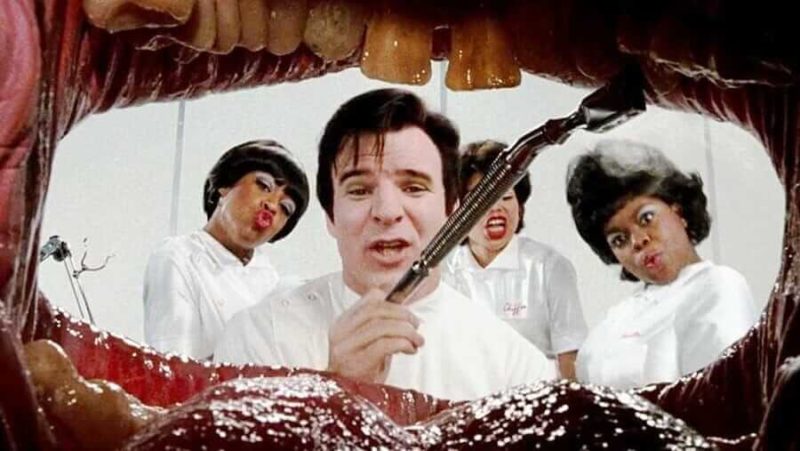 Little Shop of Horrors is a Faustian tale of the price of success, set in an urban florist’s shop in the 1960s. Seymour and Audrey are Mr. Mushnik‘s only employees, and the movie starts with the shop in a bad state. Mushnik is ready to close up shop for good, but Seymour and Audrey convince him to try putting a strange and interesting plant that Seymour‘s been working on in the window. The plant, Audrey II, is something Seymour picked up during a TOTAL ECLIPSE OF THE SUN. Of course, Seymour doesn’t recognize it as an alien, but it’s made clear to the audience very early on. Mostly by accident, Seymour discovers the plant feeds on blood. He names it after Audrey because he has a crush on her, but there’s something standing in their way: her awful boyfriend.

Orin Scrivello, DDS is a sadistic dentist and an abusive boyfriend, and after Seymour witnesses Orin hitting Audrey during one of their dates, it doesn’t take much convincing from Audrey II to urge Seymour into action. Oh yeah, Audrey II has grown exponentially since Seymour got it, and now it talks and sings. It thinks that maybe it’d be nice to eat a dentist, and Seymour‘s just the guy to deliver one. Where can we go from there? Watch the movie and find out! I’m not gonna spoil it!

The soundtrack of Little Shop of Horrors is full of tracks in the classic Motown style, fitting with the musical’s early 1960s setting. The traditional Greek chorus is replaced with an R&B girl group, with members named after real life 1960s girl groups. Standout tracks include Skid Row (Downtown), a big number with a little something for everybody, Grow For Me, in which Seymour sings a doo-wop plea to a tiny Audrey II, Feed Me (Git It), a duet with Seymour and the full-size Audrey II, and Suddenly Seymour, the big emotional number between Seymour and Audrey. 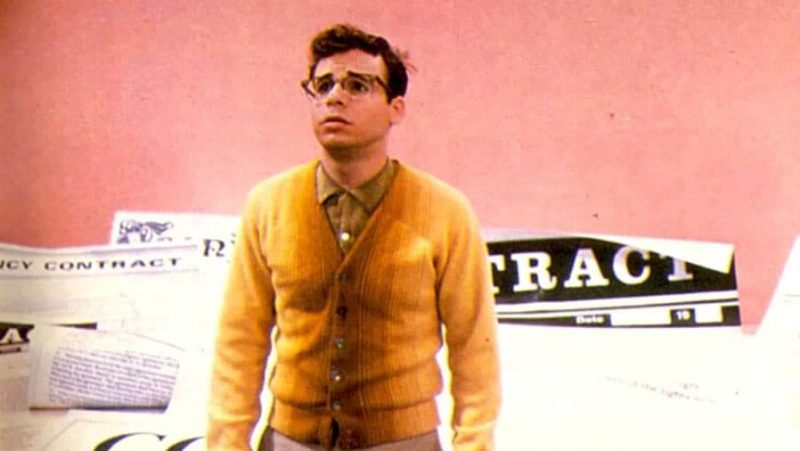 Rick Moranis is maybe one of the most lovable actors of all time, and the audience roots for him in Little Shop even when things get messy. Steve Martin steals the show as the evil dentist, and the film is peppered with cameo appearances from other 80s comedy legends like John Candy and Bill Murray. The real star, however, is the incredible puppet work for Audrey II. That’s a BIG plant, and the effects crew makes its flytrap lips sync to Levi Stubbs’ vocal work. It’s frankly (Frank Oz!) incredible, and it really does look like an actual alien plant monster onscreen. 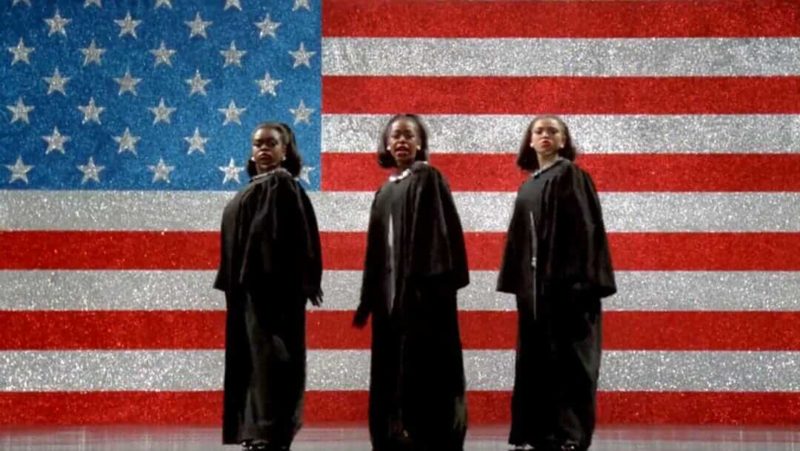 Little Shop of Horrors wasn’t a runaway blockbuster at the box office, but the home video release was a massive success. Sitting at a 90% rating on Rotten Tomatoes, it’s safe to say that everyone who sees this movie loves it and anyone who says otherwise is lying. The film’s original ending didn’t do well with test audiences, so a new ending was shot. The original ending resurfaced in 2012 though, and a few years back this restored version even had a limited theatrical run which I was lucky enough to catch. It was a ton of fun, in my opinion better than the version in the official cut, and if you get a chance to pick up the Director’s Cut Blu-Ray you should!

“It’s funny, bloody, and features some of the best songs in the off-Broadway canon.”

Have you seen Little Shop of Horrors? If not, you should fix that right now! It’s the best movie ever made! I might be a little biased because I met my wife in a stage production of the show, but even aside from that it’s not a stretch to say I’ve seen this movie over a hundred times. If you wanna talk about killer plants, evil dentists, and everything in between, hit us up on Twitter, Instagram, Reddit, and the Horror Fiends of Nightmare on Film Street Facebook page! And for more horror than you can chop up and feed to a hungry plant, stay tuned to Nightmare on Film Street. 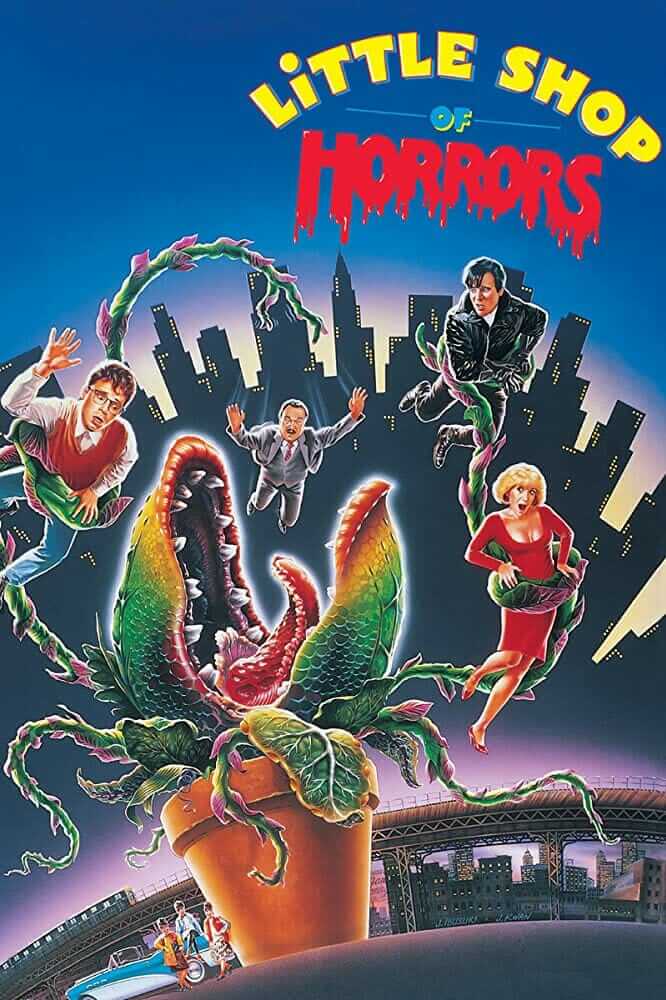