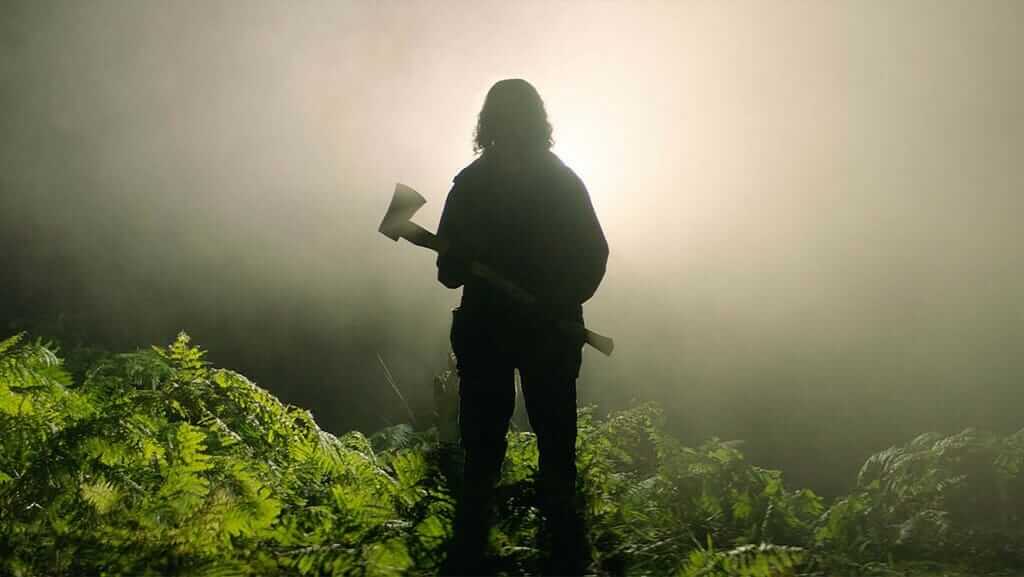 Conceived, created, and cobbled together all under Covid-19 lockdown measures in Britain, Ben Wheatley’s In The Earth was unleashed on the virtual Sundance Film Festival audience amid more lockdowns, an increasing death toll, and no sense of how this whole mess will affect us in the future. An absolute mindf*ck of a film, In The Earth takes places 5 minutes into the future. The world has been ravaged by a virus but make no mistake, this is not a Covid-19 movie. Instead, Wheatley used the coronavirus as more of a writing prompt to spin together an entirely new story that feels torn from the headlines, but also 100 lightyears away from where we are now.

In The Earth features a very limited cast (which should really come as no surprise given the circumstances) including Joel Fry (Yesterday), Ellora Torchia who genre fans will no doubt recognize from Ari Aster’s Midsommar, Hayley Squires (In Fabric), and Inside No. 9‘s own Reece Shearsmith. Another big standout is the psychedelic synth score composed Clint Mansell (Black Swan, Stoker) that not only plays a major role in the story of the film but is unique in that the textures of his compositions are, in part, sonic data from the biofeedback of plants. Neat!

Stop me if you’ve heard this one before: A deadly virus sweeps the globe killing millions without warning. Following the aftermath of that “fictional” pandemic, a group of scientists has stationed themselves deep in the remote woodland of the Arboreal Forest. Martin (Joel Fry) and his guide Alma (Ellora Torchia) are traveling 2 days by foot into the forest to meet up with Martin’s colleague Dr. Olivia Wendle (Hayley Squires) who has been deep in mysterious research. And like any protected forest worth a damn it’s home to a maybe dangerous, probably scary, ancient witch spirit. This little devil goes by the name of Parnag Fegg but Alma assures Martin it’s just an old legend people use to teach children about the rules of the forest.

Along the way to Dr. Wendle’s camp, they meet a hermit named Zach (Reece Shearsmith). Zach is also maybe dangerous and probably scary but, more importantly, obsessed with something he refers to as “the thing in the woods”. Maybe it’s Parnag Fegg, maybe it’s just the ravings of a madman, but even Dr. Wendle has her own theory about the presence they all feel surrounding them. There is something out there in those woods (…I think…) and attempting to make contact with it hurls the group into a psychedelic nose dive to oblivion.

There is definitely a goldilocks zone of hallucinogenic drug-taking for a movie like In The Earth because zero is clearly not enough. Although, it’s not hard to imagine what swallowing a handful of magic mushrooms or a tablet of acid might feel like after watching a movie like this. It’s a kaleidoscope of repeating images, hypnotic soundscapes, and cerebral thought experiments. It calls into question all we know about life, the universe, and everything in what I think can only really be described as a stripped-down, synth-wave folk horror. That might be selling it a little too hard (even I’m drooling now) but there’s no denying that it’s another of Wheatley’s ambitious, genre-defying joints.

In The Earth‘s biggest accomplishment is that it exists at all. The movie was made with limited resources and virtually no assurance that what they were attempting to do wouldn’t be shut down (See: Pandemic) at any minute. It’s a wonderful thing to see art come to life that is purely reactionary to an experience shared globally but it doesn’t exactly spell “rewatchability”. A lot of that comes down to whether or not you can key into the vibe of its swirling narrative. It’s an aspect of the film that is integral to how Wheatley wants to tell these character’s story and express how people’s rhythms and behavior can be aggressively altered in isolation. These characters are all desperately clawing for something to connect with like shipwreck victims franticly clinging onto anything in reach. At least that’s what I clung on to while desperately clawing for something to connect with. Psychedelic movies like In The Earth aren’t for everyone (heck, I’m not even sure if they’re really for me half the time) but they sure are a trip, man.

Ben Wheatley’s In The Earth celebrated it’s World Premiere at the 2021 Sundance Film Festival. Click HERE to follow our full coverage of the festival and be sure to let us know if your quarantine has been a trippy one over on Twitter, Reddit, Facebook, and in the official Nightmare on Film Street Discord. Not a social media fan? Get more horror delivered straight to your inbox by joining the Neighbourhood Watch Newsletter.

TLDR In The Earth is a kaleidoscope of repeating images, hypnotic soundscapes, and cerebral thought experiments. It calls into question all we know about life, the universe, and everything in what I think can only really be described as a stripped-down, synth-wave folk horror. That might be selling it a little too hard (even I'm drooling now) but there's no denying that it's another of Wheatley's ambitious, genre-defying joints.