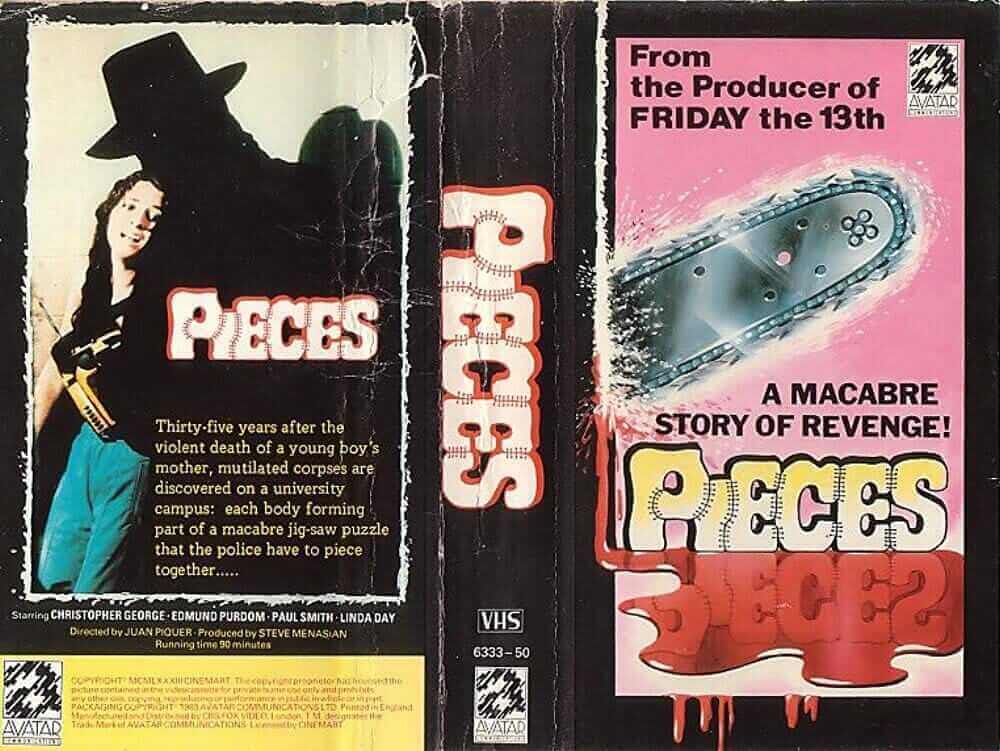 There is nothing better than rummaging through your film collection for a title that gives you a sense of comfort. When you look at a VHS or DVD case, you automatically go to your memory bank and remember the very first time you watched the film. You think of all the times you laughed, cried and how much vanilla coke you drank that night. Wow, that sugar high was epic. You remember that overall hit of dopamine you got from the film, and because that hit felt pretty great, you acknowledge that a re-watch is now inevitable.

Sexy co-eds are being slaughtered on a college campus in Boston by a mysterious, heavy breathing man in black, who happens to be sporting a chainsaw. With each kill, he takes a souvenir, whether it’s a pretty set of legs, a torso, or someone’s head. The killings seem senseless but it’s very evident that this killer is trying to replicate his own version of a pin-up model from his favorite jigsaw puzzle.

While all these slayings are popping up, we are introduced to college campus lothario Kendall (Ian Sera). He becomes entangled with one of the murders and, for some odd reason, Lieutenant Bracken (Christopher George) and Sargent Holden (Frank Brana) believe he can help with the investigation. Bracken and Holden, throw in tennis champion-turned cop Mary Riggs (Lynda Day George) to go undercover at the college as a tennis instructor. Now that there is a plan in place to monitor the campus, all that is left to do is try and catch this sicko.

“There is nothing more fun than watching some b-grade goodness and recoiling at a cringe-worthy scene.“

Pieces brings creativity and originality in spades, especially in regard to its kills. I am personally not a huge fan of chainsaws in movies. Not because I find them too violent, I just find them clunky. Having said that, with a film like Pieces, it would be very underwhelming if our killer went down the standard kitchen knife route. The chainsaw works because it changes our perception of what is a common trope in a horror film.

Usually, we see the killer slowly skulking around and when they have finally caught their prey, we are used to seeing a stabbing marathon. But with Pieces, we see our killer very slowly stalking his victims and, out of nowhere, he whips out a chainsaw. It is comical at times, but it sure does work in its favor. All of the kills we see in this film are entertaining because there is a solid and tense lead-up. One of the most notable and probably the most violent kill is of tennis player Suzie (Leticia Marfil) in the locker room after a tennis match. It is gory, intense, and above all, just pure savagery. 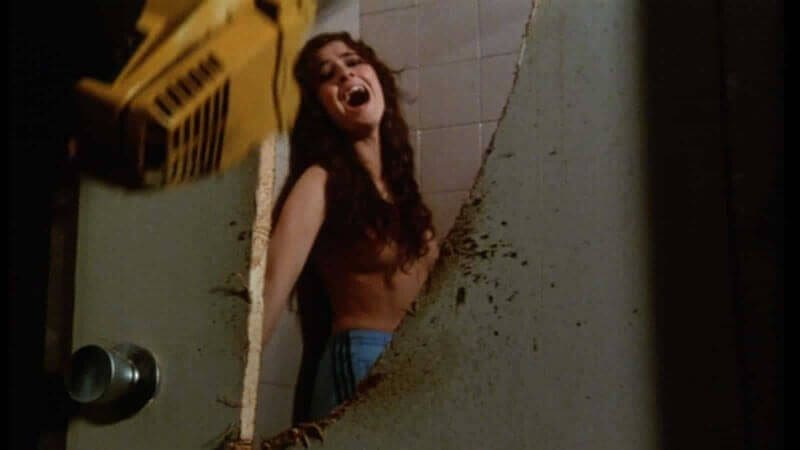 As horror fans, we know not all films are going to be critical masterpieces with A-list celebs at the helm that bring forth an Oscar-winning performance. Pieces is no exception to this, however, some of the performances bring a sense of grounded realism. Christopher George’s portrayal of LT. Bracken, brings depth and weight to the film. He is a no-nonsense cop who’s got street smarts. He’s salty and he probably has seen everything. With a cigar always not too far away from his lips, he’s a straight shooter who is more than happy to get his hands dirty in finding the killer.

Pieces has its star in Christopher George, but the film does bring the cringe-worthy performances, which fans of this film love. There is nothing more fun than watching some b-grade goodness and recoiling at an awkward scene. Need some more of that in your movie-watching diet? Well, look no further than Ian Sera’s performance as Kendall. Sure, there are moments where he is a little pulled back and controlled in his execution of the role, but I chuckle like a mad man when I see Kendall flirt or be a bit of a sex pest. He’s a young hot-blooded male, but the way he approaches women makes me wince. 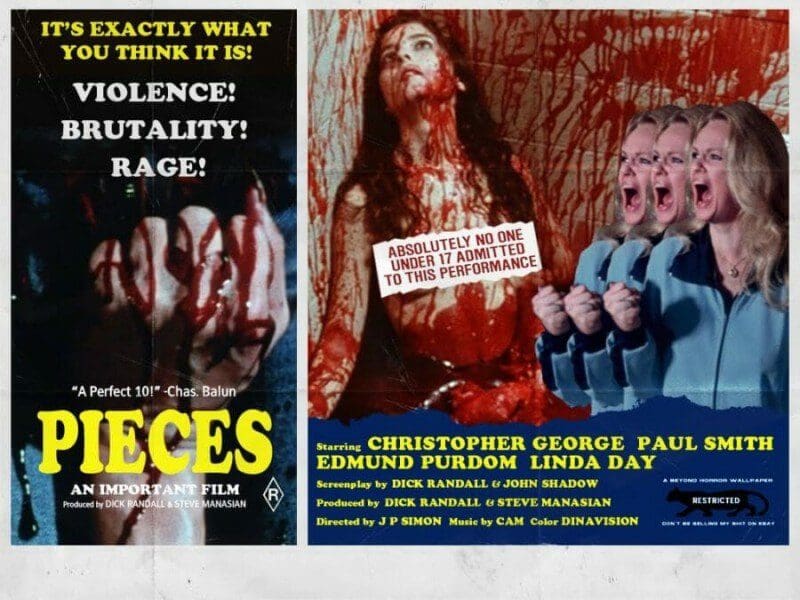 Having both serious and melodramatic performances can usually hurt a film, but that is not the case with Pieces. The seriousness of the crimes portrayed in the film is really hammered home with Bracken and Holden but we are given the ability to breathe, and in some cases laugh and cringe with more over-the-top acting. When all said and done, this film knows exactly what it is. Director Juan Piquer Simon wasn’t trying to fool his audience into thinking this was going to be a heavy, slow-paced horror. One of the taglines even stated, “It’s exactly what you think it is“.

Horror films can have different influences that not only appeal to the masses but also to that group of lovable weirdos who spend every dollar they have living and breathing these types of films. Pieces is on a different level. What works best is the sheer commitment to the lunacy that is taking place. Some of the scenes are somewhat bizarre in comparison to more mainstream horror films but because it has a European horror flavor (and to an extent an exploitive aura surrounding the film), it’s able to get away with absurdity a lot easier than an All-American production. Even the slight giallo elements, brings a unique tone to the end product. Pieces is a melting pot of genres and ideas, which can sound overexuberant, but what saves this film is the overall balance and pacing.

Pieces has always had a fairly big cult following since its 1982 release, however, over the years more people have discovered and fallen in love with this b-grade horror masterpiece. It’s because of distributors such as Arrow Video and Grindhouse Releasing, who have put time, money and passion into remastering and distributing this film to us lucky weirdos. Pieces should be in every horror fan’s collection. It’s also a perfect gateway film for those who have only experienced heavy hitters such as Nightmare on Elm Street (1984) and Halloween (1978). It’s a lot easier to handle on their film palate, especially if grindhouse cinema is a realm that they are not familiar with. But most importantly, Pieces is just pure fun.

You don’t have to go to Texas for a chainsaw massacre and you don’t have to go to the post office to share your love of Pieces with the world! Let us know what you thought of Pieces, and be sure to share all your Nostalgic faves with us over on Twitter, Reddit, Facebook, and in the official Nightmare on Film Street Discord. Not a social media fan? Get more horror delivered straight to your inbox by joining the Neighbourhood Watch Newsletter. 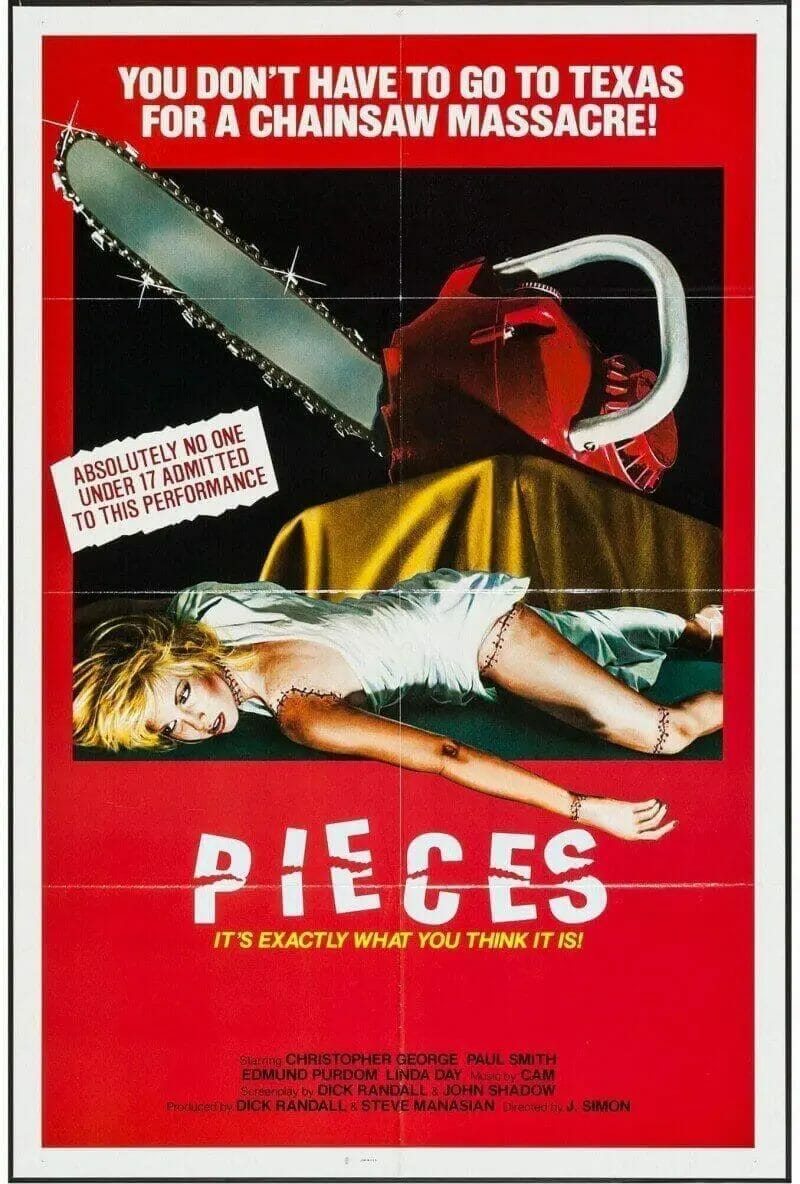