What’s up, weirdos? Welcome to 2019’s first installment of Awfully Good, where we recommend bad movies that are worth watching. This month, we’re celebrating Body Horror Month with 1986’s Troma Trashsterpiece Class of Nuke ‘Em High! Welcome back from winter break, kids, cuz class is in session. It’s a body horror bloodbath, but before we get into that we have to cover a couple of ground rules.

1. When I refer to a movie as “bad” or “cheesy” or “trash” or “medically unsafe for consumption” or “the editor deserves to be drawn and quartered” or “not very good,” I don’t mean that as a slam. Bad movies can be way more fun than “good” ones, and a film’s inclusion in this column means I love it.

2. Since this is Body Horror Month, take a drink every time is use the term “Body Horror.” Finish your drink if you read the word “Cronenbergian.”

3. Please do not feed the animals.

Now that we’re all on the same page, check out this trailer for Class of Nuke ‘Em High!

How about that? Class of Nuke ‘Em High is, in many ways, a defining work from legendary indie film studio Troma Entertainment. It’s a low-budget horror comedy that features nuclear waste, gallons of fake blood, gratuitous nudity, and shock humor. The only things missing from the perfect Troma cocktail are a certain mutant janitor and a car that launches up in the air, flips, lands, then explodes.

Class of Nuke ‘Em High opens with a nuclear power plant in Tromaville, New Jersey. Something goes wrong and the plant has a meltdown, but the owner doesn’t want to deal with the hassle and scandal that making this news public would bring. Instead, he covers up the whole mess. Because of the plant’s proximity to Tromaville High School, though, the school’s water supply is affected. One student drinks from the water fountain, becomes a zombie (of sorts), flips out, and attacks another student. Then he jumps out the window and lands on the sidewalk, screaming while his fresh melts away. Happy Body Horror Month, everybody!

On the same theme but in a different direction, we learn that the Honor Students were affected by the nuclear power plant, and are now a gang of miscreants known as the Cretins. They’re a motley crew to be sure, and they start fights and deal radioactive drugs. Now, here I have to admit something. I didn’t live through the 80s, so I have no idea if this is what 80s punkers looked like. I guess I could just do an image search, but I much prefer thinking that angry teenagers out in the real world were putting this much effort into the least practical streetwear imaginable. I love it so much. Talk about making a statement.

There’s also some of that extremely casual homophobia that shows up in 80s movies to remind us that times really were different.

So anyway, the Cretins are selling weed that grows at the power plant. They refer to it as an Atomic High, which isn’t a bad band name, and their prime buyers are their fellow students. One such student, a guy named Eddie that’s a pretty big creep by modern standards but was just pushing the limits of “lovable scamp” in an 80s teen comedy, procures some of the untested-by-the-FDA contraband and brings it to a party.

Oh, the party’s bikini-themed. You might have been able to guess that, but I felt it was worth saying. 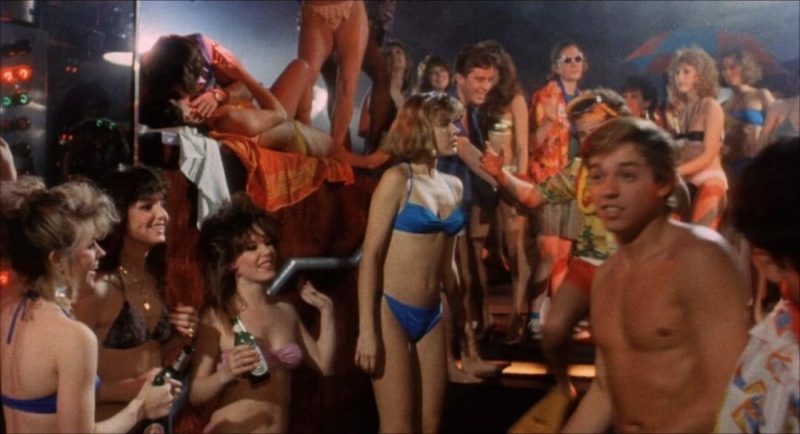 Warren and Chrissy get to know each other a little better, I believe you catch my drift, and part ways after the party. They each have body horror nightmares. Warren’s revolves around his face aging and growing festering boils, and a severe case of priapism (bonus points for using that term in everyday life next week). Chrissy, however, dreams about that oldest and most terrifying of body horrors: pregnancy. If that weren’t bad enough, a tentacle comes out of her navel and swirls around! I don’t know anything about pregnancy, but I don’t think that’s usually part of it.

Anyway, they’re both fine by the time they go to school the next morning. Later in the day, however, things get weird again. When Warren spots some Cretins in the middle of a mugging, his face starts mutating and spewing slime and he hulks out on em, leaving some very unhappy crooks in his wake. Also, he puts his hand down a guy’s throat, and it’s awesome. 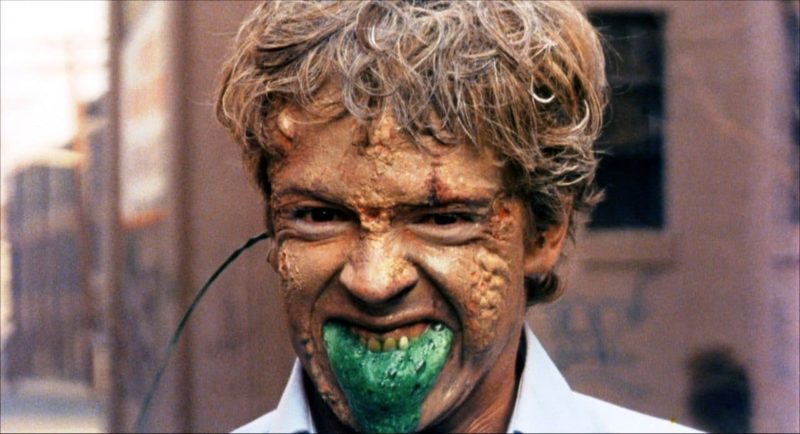 Meanwhile, Chrissy’s abdomen expands again, and she… how do I put this delicately? She yakks up a friggin’ slug in a public bathroom toilet. Chrissy gets to leave school early (cool!) but she gets taken to the hospital (not as cool). Don’t worry, though: somebody else flushes the slug thing.

It isn’t long before the school’s under investigation by the ol’ HAZMAT brigade, and the creature mutates into something bigger and batter than its original form would lead you to believe. This is, in a way, the opposite of body horror; it started off as a slug and became a towering, slimy humanoid with kickass tentacles and a bad attitude. That’s called living the dream.

Now, obviously I’m not going to spoil this movie for you, but the third act gets WILD and features one of my favorite 80s movie tropes, the motorcycles in the hallway. There are a lot of similarities to Rock ‘n’ Roll High School, which is appropriate. They’re both low-budget, punk rock exploitation movies. The biggest difference is the nudity in Nuke ‘Em High, and probably also the gore scenes. Despite its 20% approval rating on Rotten Tomatoes, Class of Nuke ‘Em High is a lovable body horror thrill ride, where you never know if the next scene is going to be filled with practical jokes or practical effects.

You might be thinking, “Gee, I’d sure like to watch this movie.” Well, friend, I have some very good news for you. The entire movie is available legally on YouTube! Troma put hundreds of movies up on the service a few years back, so you can watch this movie or many of its sequels. I recommend Class of Nuke ‘Em High 2: Subhumanoid Meltdown as well!

Are you enjoying Body Horror Month? If you haven’t already, make sure you check out some of our other Body Horror articles like this educational history lesson or this review of a more recent film or this article that is very heavy and also very good! Some of these movies are downright Cronenbergian, right? Am I using that right? Either way, let us know what splatterschlock horror films you’re watching this month over on Twitter, Instagram, or the Horror Fiends of Nightmare on Film Street Facebook group! For more horror news and reviews, keep it locked on Nightmare on Film Street.