What’s up, weirdos? Welcome to February’s edition of Awfully Good, a monthly column where we look at movies that might not be “good,” but are definitely worth watching. In the spirit of Women in Horror Month, tonight’s feature is Slumber Party Massacre III! Before we get into that, though, let’s cover some ground rules.

Now that we’ve taken care of that, let’s get into Slumber Party Massacre III!

Slumber Party Massacre III is, as you might have guessed, the third installment of the Slumber Party Massacre series. Unlike the other, bigger slasher franchises, Slumber Party Massacre doesn’t follow one psychopathic mute or burn victim janitor or zombie who never really got the hang of doggy-paddling. Instead, SPM sticks to general themes – like sleepovers, killers using drills, and lady directors! That’s right, all the Slumber Party Massacre movies were directed by women. That makes this an appropriate pick for Women in Horror Month, and that’s about all I have to add-on that. I’m not really qualified to talk about what that means for the film – I just like movies that start on the beach and feature a swordfish as a weapon. Which reminds me:

The first scene of this movie is the characters playing beach volleyball! That’s the best sport! The “cool kids” are hanging out, playing their game, catching some rays, and talking to huge nerd Duncan, when a creepy dude who kinda-sorta looks like Kurt Cobain in an all-black outfit plops down a few feet away. Also appearing at the beach is Ken, a yuppie of the highest order. The girls are happy to see Ken, but want the creepy guy to leave. I’m skipping forward a little bit here, but one of the girls drops her address book in the sand and also an unrelated character gets completely merc’d in her car. The drill kills have begun! After a chance encounter with a creepy neighbor, the girls are in for the night and ready to PARTY. They decide to order a pizza and one of the girls goes “my THIGHS don’t need a pizza” then another one’s like “yeah pizza goes straight to my THIGHS” and then they all look directly into the camera as their eyes go black and they speak in many instances of the same voice, saying “MY THIGHS” and then put on some music to have some fun! Since Roger Corman is a producer on this movie, that means gratuitous nudity. After, like, ten seconds of dancing, one of the girls tells a couple of others to do a striptease. And then they do! And everybody’s just like, ha ha, this is funny because it’s not for real, we’re all just laughing about how silly it is, and meanwhile two of their friends have popped “the girls” out and NOW THERE ARE MONSTERS IN THE HOUSE!

Sorry, I meant to put SPOILER ALERT: NOW THERE ARE MONSTERS IN THE HOUSE. Which leads me to my next point – SECONDARY SPOILER ALERT: THE MONSTERS ARE JUST THE BOYS FROM BEFORE. In an attempt to be allowed into the party, the boys (minus huge nerd Duncan) put on masks and break into the house. That’s, uh – that’s not really how you make friends. But since this is a movie, the girls go “okay, you can stay” and put some of their clothes back on. I’m skipping around a little bit, but that’s the gist. Out in the street, huge nerd Duncan spies the pizza delivery girl en route to the house, pays her some money to trade shirts with him, and delivers the pizza. Again, I’m skipping around, but that’s the important stuff. Before long, Yuppie Ken from the beach shows up to bang one of the girls, and they go upstairs to do just that. In the basement, two of the other Adult Teenagers have a discussion about when you should ask to kiss a girl on a date. The girl in the group is like, “I don’t know, just start smooching. If she’s not into it, she’ll let you know” which is not great advice. Then they start making out.

That’s not the important part of this, though. The importance of the basement scene is that it sets up so many weapons that are later used in the film. There’s a screenwriting rule (or guideline, if you prefer) called Chekhov’s Gun; that says if you put a gun on stage in the first act, it needs to go off in the second act. For all of Slumber Party Massacre III’s flaws – the schlocky effects, dialog that’s 45% “my thighs”, a level of dramatic presence and line delivery that you’d expect from a high school drama club – the film does a good job of sticking to this principle. If the characters are pointing out a dang harpoon gun, someone’s getting attacked later with a dang harpoon gun. 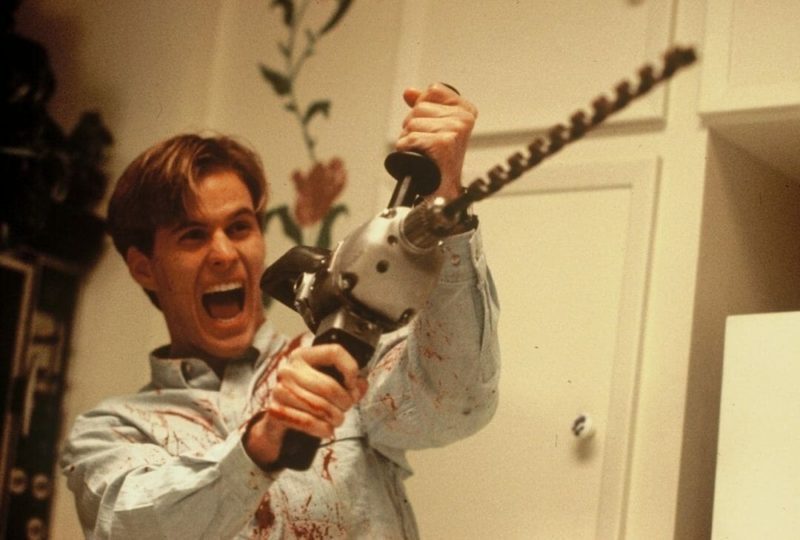 I don’t want to give away any spoilers, especially because there’s some mystery about who the killer is. I mean, you’ll probably guess it pretty quickly, but I’m not gonna be the one to ruin the fun. Once the mayhem starts, Slumber Party Massacre III absolutely delivers on its premise. There are a bunch of murders, some fun but generally pretty cheap-looking gore effects, one (dare I say it?) very good pun, and a bunch of women standing strong against a menacing man. If you’re looking to get in another Women in Horror Month title before February’s over, you could do worse than Slumber Party Massacre III. I rate this movie 3 Guys in Monster Masks in Your Living Room While You Take Off All Your Clothes As A Joke for Your Friends out of 3. The highest rating!

Are you gonna check out SPM III? What other trashy slasher movies are you watching for Women in Horror Month? Let us know on Twitter, Instagram, Facebook, and Reddit. For more horror news, reviews, and permed-out do’s, keep your browser locked on Nightmare on Film Street.