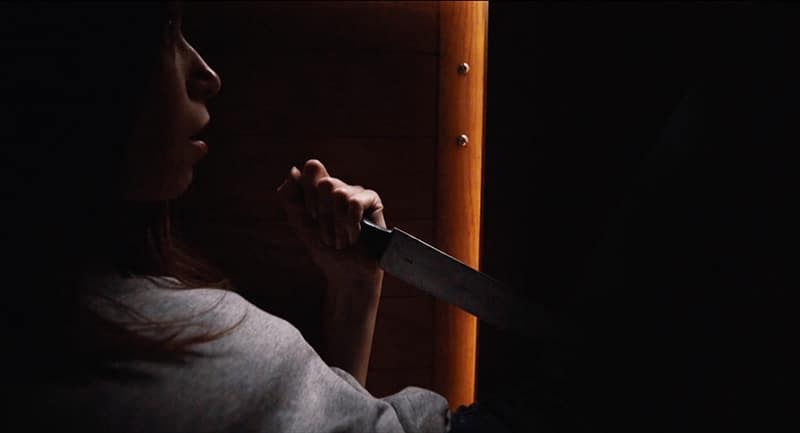 Joining the tradition of the stalker horror subgenre, specifically the “lady stalker” theme of films like Misery and Fatal Attraction, is Directer Zach Gayne’s Homewrecker, currently running at the 2020 Virtual Edition of the Chattanooga Film Festival. It’s a tightly structured, darkly comic, and effectively uncomfortable horror film that, while not revolutionary, will keep you on the edge of your seat for a brisk and entertaining 76 minutes.

Homewrecker follows a young, newly married interior designer named Michelle. Despite her appearance of success, frequent spin and yoga classes, working on her designs in a cute local coffee shop, and taking steps to start a family, Michelle (Alex Essoe) has doubts. She’s not fully confident in her marriage, and we see the anxiety written on her face as she goes about her day. At the coffee shop, she meets Linda (Precious Chong), an older woman from her gym classes, who insists on hanging out with Michelle in the familiar model of a socially awkward and uncomfortably friendly acquaintance. As the day progresses, Michelle’s accommodating niceness has her visiting Linda’s home, unwittingly trapping her in an awkward girl’s day from hell.

“[…]a tightly structured, darkly comic, and effectively uncomfortable horror film that, while not revolutionary, will keep you on the edge of your seat[…]”

Homewrecker has some fun twists and turns, made all the more interesting as it takes place over the course of a single day on a quiet, sunlight street in a charming neighborhood. The film gets under your skin from the first conversation between Michelle and Linda because of how believable the initial chain of events is. We’ve all had those awkward encounters with someone at a coffee shop or bus stop, maybe someone we vaguely know or just a stranger whose friendliness and lack of boundaries is slightly unhinged. For people who are socialized to prioritize being nice over enforcing boundaries, these encounters can draw out into unwilling hangout sessions or even “friendships” built solely on not wanting to hurt another’s feelings. This prioritization of being nice above all is something that women are especially instilled with from a young age, which is, unfortunately, a source of discomfort and sometimes danger. Watching Michelle’s desperate attempts to not hurt Linda’s feelings escalating into visiting her home is particularly uncomfortable since it’s so possible. Other women aren’t often a threat the way strange men can be, so we can ignore the red flags that pop up in those encounters.

The character of Linda is an unhinged extreme of the “Live, Laugh, Love,” wine lady with the collection of cheesy magnets and a distaste for millennial technology and social media. And while she becomes increasingly over the top as the story progresses, the character remains a memorable take on the trope. The film taps into the inherent creepiness of those older white ladies that post unsourced inspirational quotes on Facebook and buy socks that seem to glamourize alcoholism. Michelle and Linda are more archetypes than fully fleshed characters, each representing two generations of idealized white feminity, and it’s interesting to see how their ideals clash while both being inherently problematic.

Contemplating the themes of Homewrecker is where the cracks begin to show. The film works best when it adds a horror lens to the familiar. A sinister midday frilly cocktail, a creepily awkward afternoon 80s movie watch, even a bright pink bath bomb are all put to wonderfully grim use. The unnerving use of bubblegum pop songs from the 50s and 80s adds a Lynchian camp to the proceedings.

But as the film progresses through twists and turns it becomes less original in its premise, making me wish it had stuck with some of its earlier ideas. I came away unsure what the film was trying to say about women, or even what it might unintentionally be saying. There are problematic sides to every iteration of the crazy stalker lady subgenre, so I was hoping Homewrecker’s conclusion could have been as subversively original as its aesthetic. It does go to a level of gore that I wasn’t expecting, especially from the relatively bloodless majority of the film. It makes the violence pack an even greater punch when it does hit, always a welcome surprise for horror.

“…has the claustrophobic flavor of a short story, with some wickedly dark humor to sweeten the deal.”

Homewrecker doesn’t change the game, but it does make for a fun and disturbing hour and fifteen minutes. It’s mostly single location and single-day plot has the claustrophobic flavor of a short story, with some wickedly dark humor to sweeten the deal. It will certainly make you think twice about that chatty lady you know from gym class sidling up beside you at the coffee shop. If anything determines successful horror, it’s making us rethink the small uneasy moments of the mundane.

Homewrecker is now playing at the 2020 Virtual Editon of the Chattanooga Film Festival. The festival is open to residents of the United States and badges are now available at www.chattfilmfest.org. Be sure to check out all of our Chattanooga 2020 Coverage HERE, and let us know what your favourite films at this year’s fest are over on Twitter, in the Nightmare on Film Street Subreddit, and on Facebook in the Horror Movie Fiend Club!

Summary TLDR: While it doesn't bring many new ideas to the genre, Homewrecker is a darkly funny, aesthetically original, and tense take on stalker horror, strengthened by its unassuming setting and uncomfortable moments of believability. Don't expect to be thematically wowed and you'll have a bloody good time.