The iconic, bipedal cryptid who typically inhabits the Pacific Northwest has somehow made his way to Georgia. That’s what the good people at VICE believe, at least. In The VICE Guide to Bigfoot, a mockumentary that premiered at the Austin Film Festival in 2019, a producer and his frustrated reporter head on down to the Appalachian foothills to see if the Missing Link really exists—and if he in fact does, is the story really worth dying for?

As elusive as Bigfoot is in real life, movies about him aren’t exactly rare. Along with Brian Emond, director Zach Lamplugh uses Sasquatch as a much-needed conversation starter. They not only explore the timeless myth in question but also the current news climate driven by a need for views and superficial reporting. And what better target for that than VICE?

Things start off with Emond’s eponymous character, a reporter at VICE, openly airing his grievances with his dissatisfying position at the publication. Rather than covering hard-hitting news, Brian begrudgingly spends his time reporting on things like new craft beers. When he’s passed over for a potentially more agreeable job at the company, Brian takes his disappointment out on his latest assignment. He and his producer, Zach (Lamplugh), are sent to northern Georgia to chronicle the life of a local Bigfoot researcher named Jeff (Jeff Stephenson).

Much to Brian‘s dismay, this isn’t a case of a simple sit-down interview. No, he and his cameraman have to go camping with Jeff in the deep, dark forest. This development leads to some inevitable friction between the two friends as well as uncomfortable moments with their resident Bigfoot expert. Eventually, the trio gets lost without a clue as to how to get out of the woods. What was intended to be yet another fluff piece turns into a scary ordeal Brian will never forget.

Urban dwellers entering the great American wilderness to find Bigfoot is a common premise. Lamplugh and Emond distinguish their story by adding a sense of humor. Horror and comedy do not always mix, but the writing duo scores big laughs with earnestly funny setpieces and awkward social interactions. The key to their win is simply offsetting any and all absurdity with utter seriousness. The hilarity is genuine without any miscalculated visual gags or an ounce of overacting. Everything is as sincere as it would be in real life. From there, viewers easily catch on to the crafty, self-deprecating jokes and amusing observations.


The VICE Guide to Bigfoot‘s refusal to wink at the audience makes it so pleasurable. Rather, the satire comes from within. The critique of shallow reporting and dishonest headlines is acknowledged without being obnoxious. Lamplugh and Emond aren’t going to dismantle the system, but they do paint a provocative picture of today’s journalism practices. These hard truths ultimately make the movie more relatable.

As much as this is a film about finding Bigfoot, it’s essentially one of self-discovery, too. Brian slowly recognizes his attitude is not helping advance his career; his disdain for his job spills over into his relationship with Zach, who is the voice of reason at all times. Meanwhile, Jeff is painfully oblivious as to why his wife left him. Many of the jokes are at his expense, but the truth of why he seeks out Bigfoot is an emotional pinch on the shoulder. The two characters come full circle, not to mention make a complete turnaround as far as likability goes.

So what of the movie’s horror aspect? Fret not as The VICE Guide to Bigfoot fulfills its promise of serving up some bona fide Sasquatch. The last act is entirely plot-driven, but there is still fun and thrills to be had. This is the point where the main characters earn our approval.

“The VICE Guide to Bigfoot may not make people believe in its legendary namesake, but it will remind them that horror mockumentaries can be effective when placed in the right hands.”

With its stinging brand of dry humor in addition to shrewd commentary regarding clickbait culture, Lamplugh’s debut feature is a rewarding experience for both the creators and those watching. The subject matter is not astoundingly groundbreaking, mind you; the way everything is pieced together and presented is just impressive. The VICE Guide to Bigfoot may not make people believe in its legendary namesake, but it will remind them that horror mockumentaries can be effective when placed in the right hands.

The VICE Guide to Bigfoot is currently screening at the Chattanooga Film Festival. Share your thoughts on the movie with the Nightmare on Film Street community on Twitter, in our Official Subreddit, or in the Fiend Club Facebook Group! 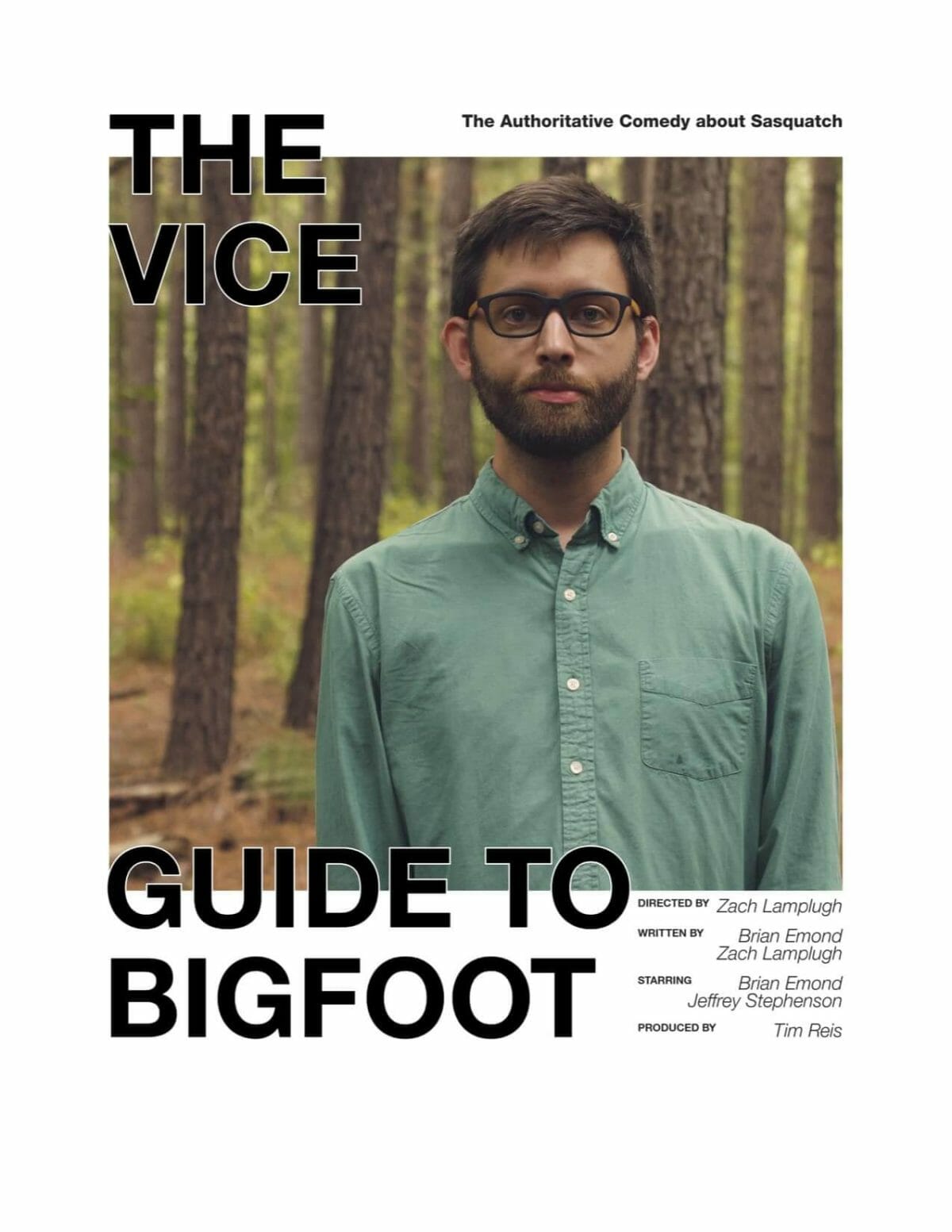 Review: The VICE Guide to Bigfoot (2020)
TLDR
With its stinging brand of dry humor in addition to shrewd commentary regarding clickbait culture, The VICE Guide to Bigfoot is a rewarding experience for both the creators and those watching. Horror and comedy do not always mix, but the writing duo scores big laughs with earnestly funny setpieces and awkward social interactions.
Bigfoot Fun
90
Hilarity
90
Likable Characters
95
Success as a Satire
90
91