Though this year’s Fantasia Fest was chock full of the best kind of horror tropes, only a few of them used vampires. And even if they did, they didn’t use them quite like Climate of the Hunter. A funky drama between a vampire and two very weird sisters, Climate of the Hunter was as weird as it was enjoyable. During the festival, Nightmare on Film Street got the opportunity to chat with Climate‘s director, Mickey Reece, who let us in on just how he can make a movie so strange… and have an absolute blast while doing it. Read on to see what he said, but be warned, some (mild) spoilers await.

Grant DeArmitt for Nightmare on Film Street: Have you been enjoying Fantasia so far?

Mickey Reece: Well, I’m working on a movie that we shot in January. We’re getting that prepared for sound and colors. So I’ve been pretty busy, but yeah, every time there’s a new Festival, you’re always refreshing Twitter, seeing what news pops up.

NOFS: Have you been happy with the reviews you’ve been seeing?

Reece: Oh yeah, of course. I’m happy with bad reviews and good reviews, it doesn’t matter. Most of the time the bad reviews are more fun to read than the good ones.

NOFS: Really? What do you mean by that?

Reece: Sometimes the bad reviews will be written well. They’re like, “we totally got but this guy was doing and we don’t like it.” And you know, that’s respectable. And then sometimes the reviews will be so off base that we ask, “what movie were you even watching?” So those are fun to read. Most of the responses [for Climate of the Hunter] has been positive, so that’s great too!

NOFS: One of the things that stood out to me about this movie was its music, which was done by Nicholas Poss. Could you talk about putting it into the movie?

Reece: Alright, this is a secret that I will reveal: I edited the movie and used temp music. I used the score to the movie The Childhood of the Leader by Scott Walker, which is a coincidence because the movie’s title is also the name of a Scott Walker album. I used that score mixed with the score from Daughters of Darkness. So that was the score, it set the tone for what I wanted, and then Nick went in and did his own version. Not that he took anything from any of those tracks, just that he used that as a reference point. That’s actually my favorite part of the process, working with the score. Working with the music.

NOFS:  When you’re writing the script, do you hear the music to the scene? Does that ever make it into the script?

Reece: It certainly has before, but not necessarily with this movie. I have certainly been in situations like that when hearing a song makes me see a scene. And then I write the scene. Even if I don’t use that song, because I never can because they’re expensive, I can at least use the inspiration for the same. It’s almost like creating something original out of necessity. You can’t help it because you have to work around the constraints that you have. It ends up becoming something original in the process.

“[…] we figured, well, Nosferatu could use some Virginia Slims.“

NOFS: Speaking of scene creation, one of my favorite scenes in this movie was the character of Alma‘s dream sequence. Can you talk about creating that scene? It’s the trippiest scene in the movie.

Reece: That was all, you know, for fun. There’s no big mystery behind it all. My friend Ron is an older gentleman and, he has a bunch of friends who will sit around and smoke cigars and drink wine and play poker. So I was like, hey, let’s get all of you guys dressed as vampires and do the exact same thing that you normally do.

I’m always trying to figure out a way to make something light, but not an over-the-top joke. Take, for example, the bit when we cut to the Nosferatu character talking to Alma. We had Virginia Slims cigarettes, because the character of Elizabeth was going to smoke these very skinny cigarettes. We didn’t end up using her smoking, we figured it doesn’t really work for her to be a smoker. But since we had Virginia slim cigarettes, we figured, well, Nosferatu could use some Virginia Slims. (laughs)

A lot of my stuff ends up looking more “David Lynch” than I imagined it. I never seek out to do something David Lynch, but I execute it and I’m like, oh, it’s kind of Lynchian. I didn’t mean to do that. But alright. The big thing [for this scene] was that this is the part of the movie where we need to have fun and get wild with Alma’s thoughts. It was all kind of… subconscious filmmaking. You see something cool and you think “let’s get that! We’ll piece it together later and figure out what it is.”

NOFS: Speaking of the Alma and Elizabeth, let’s talk casting. Are these actors that you’ve worked with before? How did they get involved with the project?

Reece: Oh yeah. The roles were written specifically for those actors. See, I make movies backwards. With this one, it started with having a cool location, with getting those cabins or we could go make a movie for a couple of weeks. I already knew who I was going to cast. So I had the cast and the location and then I thought, “Alright, let’s write the script.”

NOFS: Were any of the scenes improvised? You’ve spoken about coming up on things as you find them. did any of that happen as you were filming the scenes? Or did they stick to the script?

Reece: Nothing really with the actors. The language was so heightened that it was hard to improvise any of the that stuff. It was straight from the script.

NOFS: I do want to talk about the location. It’s such a gorgeous place and it’s so perfect for this movie. Can you talk about how this location showed up? How you used it?

Reece: It’s this private club where a bunch of people own these cabins. And it’s in this very very strange, middle-of-nowhere place. It’s its own little town, way out in the country, in the woods. There’s a bunch of cabins that people own, and I had to keep it very very private. The owners told me, “If you’re going to shoot here, you can’t tell us all what this place is called, what this place is, where it’s at, anything like that.”

It sounds more dangerous that it is.

NOFS: What are you most proud of in this film?

Reece: I think Percy‘s dinner scene is, as of right now, the best scene I’ve ever directed. It was very fun. It’s blocked very strangely and there were a lot of moving Parts. The tone works really well. Doing that scene was the most exhilarating filmmaking experience I’ve ever had. We were moving very quickly; I would say cut and we’d run around. It was very efficient. We were all on the top of our game. I liken it to playing sports; we were like a basketball team that was really killing the game that day.

I blocked that scene with the actors for a long time, though I had no idea how I was going to shoot it. Finally, I watched a commentary on 12 Angry Men. They shot that movie starting out below eye level, and then moving it above eye level, and then keeping it at eye level. It went back and forth between different sections. So, I broke my scene up into different sections, and now every time I watch that scene, I think, “Wow that’s my best work. It’ll probably never get any better than that.” (laughs) 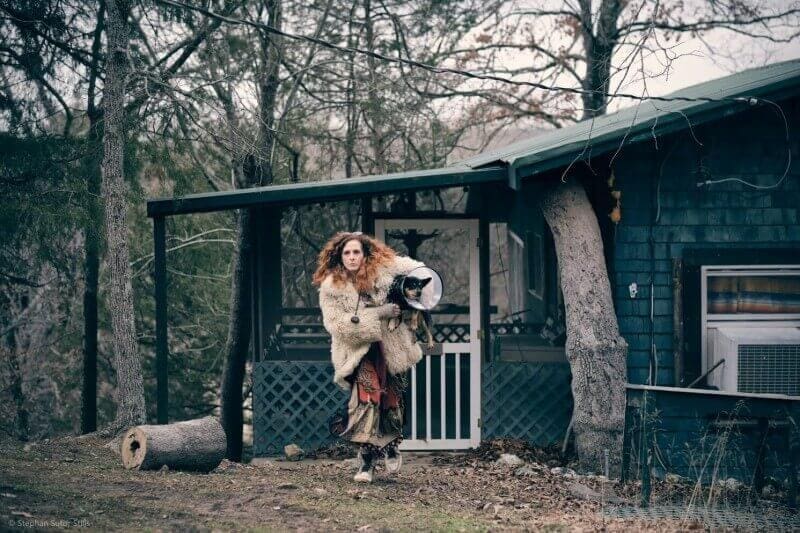 NOFS: I love that scene, and I loved all of the dinner scenes. One thing I loved about them is that they started with these “food promos,”  where you get a shot of the weird food that they are eating and a voice narrates it. Can you talk about putting those in? Was that another “for fun” thing?

Reece: Our production designer, Kaitlyn Shelby, and I were looking at pictures of what we wanted the cabins to look like. Because, you know, we want the movie to be in the seventies. We were looking at these foods, the strangest foods. People ate weird shit back then.  So Kaitlyn would prepare these meals, and they looked so good, and I thought, “We can’t just have these at the table. We need to shoot a presentation of the meal.” She would say what it was and we thought, “We are just going to have to include that in the movie. We’re just going to have to include her announcing these meals.” That’s not written into the script. It was just while shooting that we were finding that stuff, we would say, “We’ve got to include this.” I mean, what choice did we have but to put those meals before every dinner?

What choice did we have, Grant? 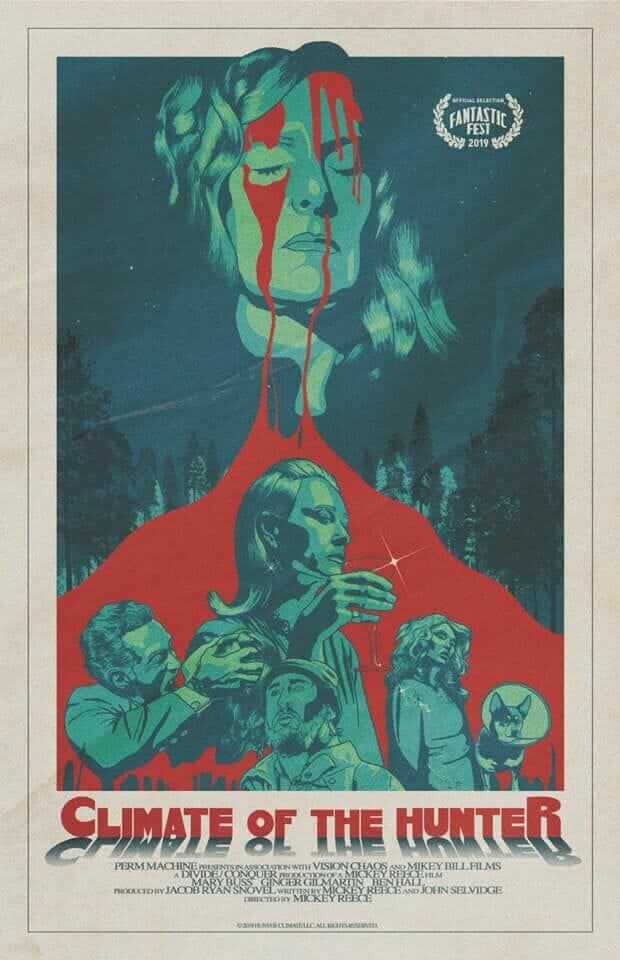