[Exclusive Interview] INTO THE DARK: PILGRIM Patriarch Kerr Smith on Gratitude And What NOT To Do on Thanksgiving 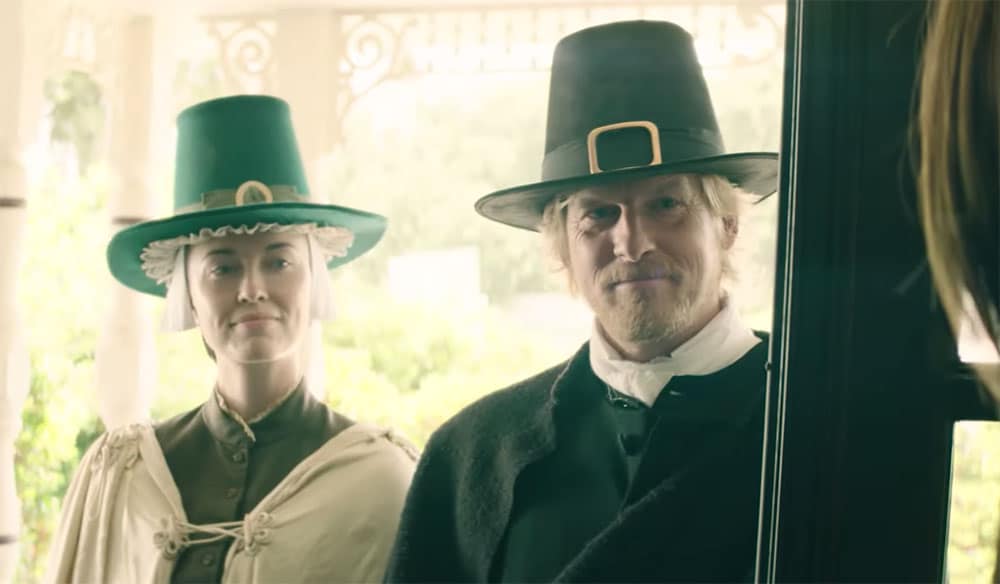 Gratitude comes in many shapes, forms, and roles. At this time of the year, we pause to reflect on all that we are grateful for… or all that we should be. Marcus Dunstan’s (The Collector) November episode of Into The Dark, seasonally titled Pilgrim, offers a bounty of blood and menace to spread the good word of thanks and blessings. When colonial pilgrims provide a modern family with an authentic Thanksgiving meal, the more sinister sides of tradition take hold and give The Barker Family more of a holiday re-enactment than they wished for.

Many of Pilgrim’s characters learn a valuable lesson in gratitude, especially that of Shane, the household’s the patriarch, brought to life by Kerr Smith. The actor graduated from Dawson’s Creek to many well-known parts in the horror genre including Final Destination, My Bloody Valentine 3D, and, my personal favorite, The Forsaken. Being a familiar fan of his work, and acknowledging his variety of roles, I wanted to know what being part of this episode meant to him personally and was grateful to learn he is more present than his father character stuck behind the screen of his tablet. Smith’s role reminds viewers to look beyond their digital screens and appreciate what they have around them before it’s too late…

“I thought it was really unusual for a horror film to have such a positive and uplifting message. Even in all the craziness of the situation, it was gratitude that the antagonist would convey over and over”

Jessica Rose for Nightmare on Film Street: What about Pilgrim was the most appealing to you as an actor?

Kerr Smith: It was the message of gratitude and appreciation. I thought it was really unusual for a horror film to have such a positive and uplifting message. Even in all the craziness of the situation, it was gratitude that the antagonist would convey over and over in the film. That appealed to me.

NOFS: What attracted you to the role of Shane? Could you identify with Shane’s character?

KS: I think at one point or another we’re all guilty of the complacency that Shane demonstrates. He’s completely immersed in his own world and somewhat oblivious to the needs of his family. It’s not really until things start to go very bad that he eventually wakes up. Having the opportunity to show what NOT to do and how NOT to behave with people that you love was something that attracted me to the role.

NOFS: What were the dynamics like on set between the cast? What was it like to work with Marcus Dunstan?

KS: We all worked together really well, I thought. Fun personalities all around which helped with a difficult schedule. I thought Peter Giles did an amazing job being the antagonist of the film. The part of Ethan really drove the story and Peter pulled it off in spades. Marcus, in particular, was amazing. As a director, you set the tone of the production and Marcus did this better than anyone I’ve ever met. He’s an extremely positive person and never had a bad thing to say about anyone, which made for a really fun place to go to work.

NOFS: As far as meaning goes, what are you hoping viewers take away from the story of Pilgrim?

KS: Well, as I said, I hope the take-away is to remember to appreciate those that are in your life and to not take them for granted. Having gratitude for what you have will absolutely change your life because it changes your energy into an ongoing positive vibe.

NOFS: Do you have any special Thanksgiving traditions?

KS: We do. My family gets together at my parents’ home in South Carolina every year to celebrate Thanksgiving. The week is always filled with boating, fishing, golfing, football and tons of food! I look forward to it every year.

Are you already watching the second season of Hulu and Blumhouse’s Into The Dark anthology series? What do you think of the series’ November episode, Pilgrim? What did you think of Kerr Smith’s character, Shane? Let us know your thoughts over on Twitter, Reddit, or in the Horror Movie Fiend Club on Facebook.