It’s been a busy year for the writing/directing duo responsible for the edge-of-your-seat thriller The Boy Behind The Door. The film is the second film release for David Charbonier and Justin Powell behind their debut feature The Djinn. The latter is a terrifying tale of a mute boy who’s forced to fight an evil djinn, but The Boy Behind The Door is a story about “friendship and hope” wrapped up in an adrenaline-fueled struggle for survival after the boys are kidnapped after baseball practice.

The Boy Behind The Door celebrated it’s world premiere at Fantastic Fest 2020 and is now available to stream on Shudder. I recently had the pleasure of sitting down with the pair to discuss their film, the movies that inspired them to become filmmakers, and why villains are so damn funny to watch on screen.

“We’ve been best friends since kindergarten. We bonded at an early age over horror movies and sneaking into R-rated movies…”

Jonathan Dehaan for Nightmare on Film Street: So how did you guys meet? What’s your origin story?

David Charbonier: Honestly, we’ve just been lifelong friends. We’ve been best friends since kindergarten. We bonded at an early age over horror movies and sneaking into R-rated movies that we shouldn’t have been. I don’t know how that took the turn into wanting to make movies together. I think we’ve just always loved the genre and we thought, why don’t we just try it? It’s a crazy idea, both our parents thought it was insane- I think they still kind of do- but yeah, we just wanted to see if we could come up with interesting stories and figure out crazy ways to make them happen.

NOFS: Do you remember one of the earlier movies that the two of you bonded over?

Justin Powell: Jurassic Park is definitely a big one. There was also Kiss The Girls which is kind of random. There were a bunch [and] I think after that we started coming together over a lot of the classics like Child’s Play, Halloween, and the lot. You know, all those good ones, but I can’t think of a very specific one. I do remember this- I don’t know, you talking about that David [reminded me]- we briefly were attempting to make some kind of Slasher in high school.

JP: [laughs] There’s nothing to even talk about, it never came to fruition.

DC: We tried some scenes they just didn’t materialize into anything.

JP: Yeah, but I think that was our first, you know, us wanting to do this kind of thing together and now, in our adulthood, take it more seriously [laughs]. 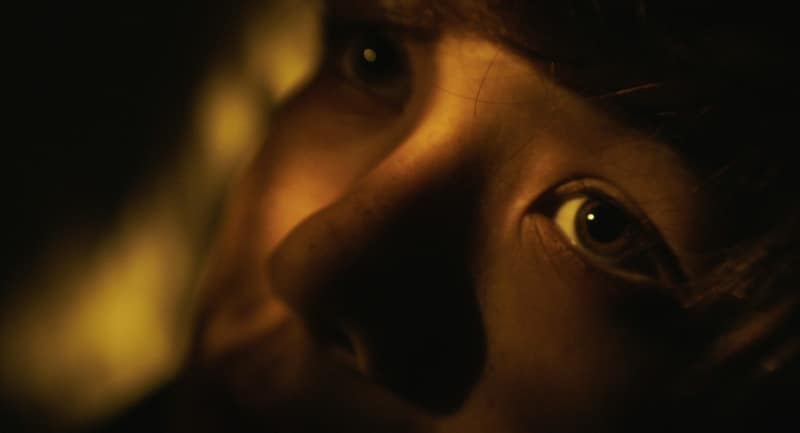 NOFS: That’s so cool. What was it about Jurassic Park that the two of you really connected with? Was it the scarier stuff or the wonder of seeing dinosaurs come to life?

DC: I really think it was the wonder. Wonder is this quality in film that we really love. Chris Colombus does it so amazingly, obviously so does Speilberg with that Amblin feel. It’s just that excitement that you could be going on an adventure at any moment, your entering this new world, and it is scary but its’ also thrilling, and exciting. I mean, doesn’t everyone kind of wish they could go to Jurassic Park? Even if it is dangerous.

NOFS: So where does the darkness come from? Because The Boy Behind The Door is incredibly dark.

JP: I think that just kind of came organically. We wanted to tell a story about friendship and hope, and these boys that are just really inseparable and want to save each other at all costs. Knowing that that was the foundation, we just built out organically from that. We’re always drawn to darker tales but we never want things to feel overly cruel or exploitive or too grotesque, and we just wanted to make sure that we had something that had that theme of friendship. I can’t tell you exactly how we got to the dark backdrop precisely, it just felt appropriate given who our protagonists were and what they were trying to acheive.

NOFS: The villain that you made for them to is just a human monster. She’s terrifying. Where did you come up with her?

DC: We really love larger-than-life, over-the-top villains. I think movies from the 90s and 80s just did it so amazingly. I’m thinking of Die Hard right now but, you know, Alan Rickman’s character- they’re more animated, they’re more expressive, they take time to have speeches, they want to convey their feelings and how they came up with their plans. That’s the fun stuff for us. We didn’t want her to be super grounded and serious. We actually wanted her to be a little fun so those scenes could be a little bit more humorous, like when she gets hurt or when she’s super frustrated. That stuff is just really funny for us. I always laugh when I watch her scenes. I would laugh when if I watched another villain that I really enjoyed seeing on screen too. I We just wanted to have fun with the character.

NOFS: Do you laugh when you watch The Shining too?

JP: There are moments when Jack Nicholson is at his most manic that it’s definitely kind of humorous. Obviously, we do have nods to The Shining in [The Boy Behind The Door] but, I don’t know, I kind of think a lot of Annie Wilks when I think of our kidnapper. Just in terms of her mania. I definitely found humor in her. It’s weird, we find humor in horrible villains and,  I think in ways that people get terrified we just- and in a good way [not] in a way where we’re making fun of them or anything, it’s just kind of fun for us. All that’s to say that if there’s a villain that we really enjoy than, yeah, we probably find some kind of humor in them. 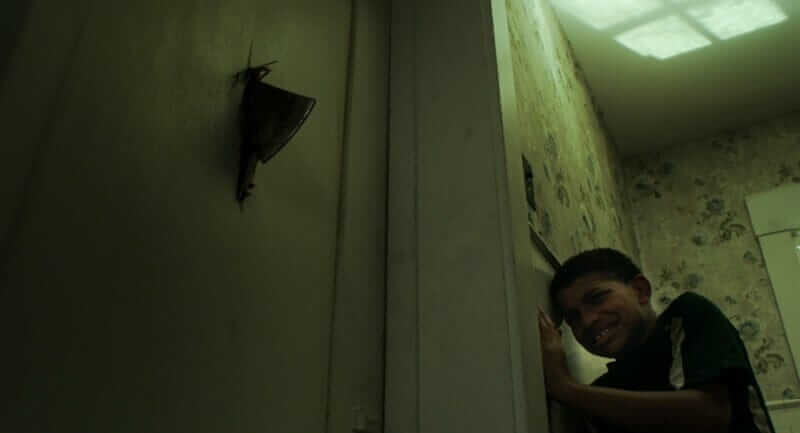 NOFS: Is that how, as creative partners, you know that you’ve got a character in that sweet spot? When you start laughing at them?

JP: Maybe. I hadn’t really thought about that.

DC: I mean, in the script I would always, always, always laugh when the scene came of her getting her thumb chopped off, and then she’s cursing at [the kid] like “you cut off my fucking finger?” That’s just the funniest line. As a nerd, like, as two people that crack each other up, I would always laugh. Even when I watch the movie, that’s the one scene that I always laugh at. Even though I’ve seen it like 100 times, Kristin Bauer van Straten brought the scene to life so amazingly. It was more than we ever could have imagined how she brought such a personality to that role. She’s just deliciously evil.

NOFS: This is an old phrase and I don’t necessarily think that it’s true but people always say don’t work with animals, and don’t work with kids. You have made two movies back-to-back with kids. Did you find it any harder to work with child actors as opposed to adults?

JP: Honestly, not in terms of getting the performances. It’s more in terms of the hours and the limitations that you have around how long you have them on set. Fortunately for us, we had just the best casting director ever, Amy Lippens, and she found us these immensely talented boys. They were able to just get whatever you need in like the first take. So that’s never really been an issue for us in terms of our first two features but, you know, we only had five working hours a day with them. That was a problem, and this whole thing is at night so we were oftentimes needing to be finished by 10:00 pm, midnight on a weekend if we were lucky. That was the trickiest part but in terms of getting the performances, no. They were just as talented as the adults which is pretty incredible, really.

“[Ezra Dewey and Lonnie Chavas] were just as talented as the adults which is pretty incredible, really.”

NOFS: You also released The Djinn this year. Do you guys have another two movies coming out in 2022? Is that the plan? [laughs]

DC: We would like to! We really hope to have another one soon. We’re still trying to get a couple of our stories off the ground. It never gets easier, is what we’re learning. Everyone used to tell us, you make your first feature and it’s so much easier to get your second one made. It seems like it’s going to be difficult every single time, and that’s fine. I will say though, our next movie, we’re going to have kids and animals. We don’t want it to be too easy.

JP: Ooooo- I would pair up Don’t Breathe and The Descent.

DC: He picked two of my favorite movies. I guess I would say Gremlins and Death Becomes Her.

David Charbonier & Justin Powell’s The Boy Behind The Door is streaming on Shudder now! Be sure to let us know what you thought of this nailbiter of a thriller, and what you would do if your best friend was kidnapped by creeps over on Twitter, in the official Nightmare on Film Street Subreddit, and on Facebook in the Horror Movie Fiend Club!