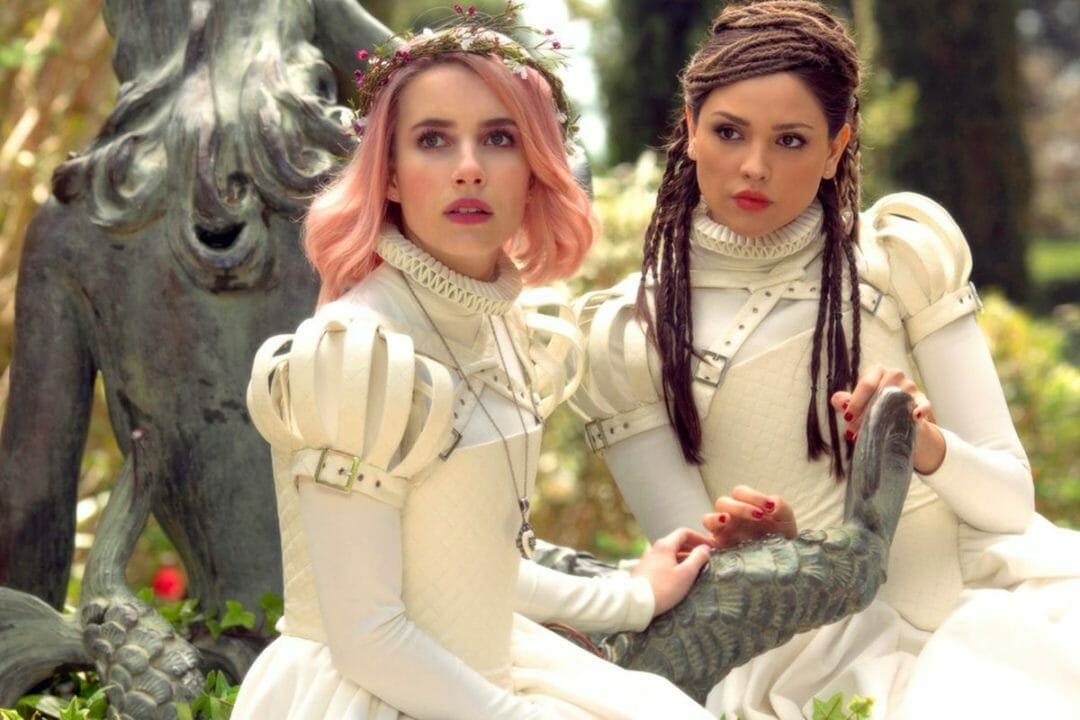 If Steampunk had been adopted by Perfume companies and the Dollmaker Mattel, (instead of neo-gothic adults with an affinity for copper pipes and belt buckles,) it would look like Paradise Hills.

A coming of age Fantasy, the American-Spanish film from first-time feature director Alice Waddington, is dripping in feminine style and grace. The film’s palette is torn from the pages of a high fashion magazine circa Gwen Stefani’s Alice in Wonderland/Harajuku phase. I sure hope you like your narratives wrapped in smooth silk and dipped in the dew of a flower opening at sunrise. Because Paradise Hills is simply dripping in it.

In a Dystopian universe of Mary Antionette-Esque Artistocrats and hovering automobiles, Uma (Emma Roberts, The Blackcoat’s Daughter) awakens in the earthy prison of an elite boarding school, Paradise Hills. An independent-thinking firecracker, we learn Uma has been given a two-month time-out to reconsider the marriage proposal of a wealthy mega-douche. The fairytale island is run by the utterly perfect (and therefore suspicious) Duchess (Milla Jovovich, Resident Evil), who clips roses and quips affirmations at the girls.

As she settles into her new life and Paradise Hills-appointed hairstyle, Uma befriends her roommates and fellow pink prisoners; the cheery and chipper Chloe (Danielle Macdonald), and the quiet, broody Yu (Awkwafina). Together, they countdown the clock on their two-month sentences, the island never quite cracking their individuality.

It’s all a bit Stepfordy on Paradise Hills. After defiant musician Amarna (Eiza González) completes her stay and pops up in the real world an entirely different person, Uma and friends must discover the island’s dark secrets before their own time is up. Facing poisoned milk, carousel rides of propaganda, and flowers with a mind of their own, it seems almost easier just to be obedient. But.. if there’s anything we should take away from Paradise Hills, it’s that girls will be girls. Paradise Hills fully embraces femininity, while prodding at the very repressive societal norms that would subdue us. Girls are carted like cattle to daily makeovers sesh’s, yoga classes, and itty bitty formal dinners, led by a debutante dictator who looks as if she’s a pin-up cartoon from a laundry detergent ad in 1952. The girls themselves are unique, all with their own struggles, wants, and dreams – and all of them sharing one commonality.. they aren’t what someone with power and affluence in their life wants them to be.

“Paradise Hills fully embraces femininity, while prodding at the very repressive societal norms that would subdue us.”

And though the film is shouting you can be a peony, a rose, or a pair of spikey punk-rock headphones, I gravitated most to Paradise Hill’s story of friendship. I loved watching Uma, Chloe and Yu banding together – even before there were big baddies to fight. One scene, after the Duchess loses her cool, she upsets Yu, who struggles with serious anxiety. Chloe and Uma instantly surround her with support and positivity, correcting her headphones (a source of comfort for her), and helping her to regain her composure. It’s these moments where I really see the feminism of this film. Despite the fact that these girls are being repressed and molded from all sides, they band together and support one another. A united force against lipsticked foes.

Emma Roberts, who’s never made a misstep in her burgeoning career, is determined and confident as the pink-haired Uma. The majority of her recent roles require her to play the catty, witty mean girl – it’s nice to see her slip into the character of a more human, feeling, emoting twenty-something.. even if that character resides in a dystopian reality.

Milla Jovovich is postcard-perfect as the Duchess, and her third-act turn to lead villain is worthy of Coraline’s The Other Mother. I will admit, it wasn’t until the third-act reveal I understood what had jumped off the page to grab her. Despite being drop-dead perfection in every scene, there isn’t much meat for an action star of her caliber. I found it hard to believe she had only come to Paradise Hills to play dress up. And right I was, as she commands the finale with a character design worthy of a Tim Burton CGI romp.

Unfortunately, the story does get a bit muddled with added love interests, a backstabbing plot, and a few resolutions feel rushed to resolve. There are some major sci-fi elements at play in Paradise Hills that don’t get explained fully, so much so that they dominated the post-screening conversations in the ladies’ room. Girls were shouting theories over stalls at one another. Also, though not a musical, this film does have a few big musical numbers that, unfortunately.. fell flat for me. Not all debutants can be singers. In this case, none of them were.

Overall, Paradise Hills is a gorgeous, sci-fi fantasy that both embraces femininity, and challenges it. Emma Roberts and Milla Jovovich are excellent, each dipping their toes into roles we rarely get the opportunity to see them in. The film will surely become a lasting coming of age story for girls today, taking our young Alice’s from Lewis Carroll.. to Ira Levin.

Paradise Hills had its Canadian Premiere at the 2019 Fantasia Film Festival. It will be released on VOD and in limited theatres on November 1st. The Fantasia Film Festival runs until August 1st in beautiful Montreal, Canada. Click HERE to check out all of our continued coverage of the festival, and be sure to follow us on Twitter, Instagram, and Facebook to see silly photos, immediate film reactions, and the occasional photo of lunch. Summary Paradise Hills is a gorgeous, sci-fi fantasy that both embraces feminity, and challenges it. Emma Roberts and Milla Jovovich are excellent, each dipping their toes into roles we rarely get the opportunity to see them in. The film will surely become a lasting coming of age story for girls today, taking our young Alice's from Lewis Carroll.. to Ira Levin.