There are few horrors so iconic, so jaw-droppingly terrifying, that they have eclipsed the entire horror genre. Constantly compared, credited, and used as a marker to stake a claim over entire sub-genres. I am speaking of course, about Hideo Nakata’s Ring (1998), both the quintessential j-horror, paranormal mystery, and J-horror remake in Gore Verbinski’s The Ring (2002).

It’s 2019, and while Sadako is still popping up from her well on occasion, the Japanese paranormal whydunnit has long since died down. Audiences grew bored, and Sadako’s well had finally been tapped. Her tv flicked off. Kayako’s groan had croaked. Until Stare.

When I first sat down for the World Premiere of Stare at the 2019 Fantasia Festival, I had two instantaneous – and conflicting – reactions. First, the kneejerk reaction – “Is this just a re-hashing of The Ring?” followed by a – “Oh wow, I’d forgotten how scary these were.”

And I pretty much cycled through those two emotions the entire runtime of Stare. The film succeeds in being an entirely fresh mystery, with an entirely new villain, and an entirely new set rules, but at the same time.. still feeling completely and utterly nostalgic.

“[..]Stare is somehow able to miraculously avoid misstepping at every turn.”

Written and directed by Hirotaka Adachi (also known as Otsuichi), Stare follows university student Mizuki (Marie Iitoyo) who goes on a ghostly goose-chase after witnessing the death of her friend in broad daylight. By eye explosion. EYE EXPLOSION. Banding together with fellow student Haruo (Yu Inaba), whose brother also died under the same mysterious eye-popping circumstances, they chase down answers, learning of a ghost story that curses those who dare listen to it. The key to this spooky tale is the name of ghost girl Shirai-san. The ghost is spoken as having huge eyes, a dangling bell, and always trailing behind the narrator until that narrator passes the curse onto the listener by divulging the ghost’s name. 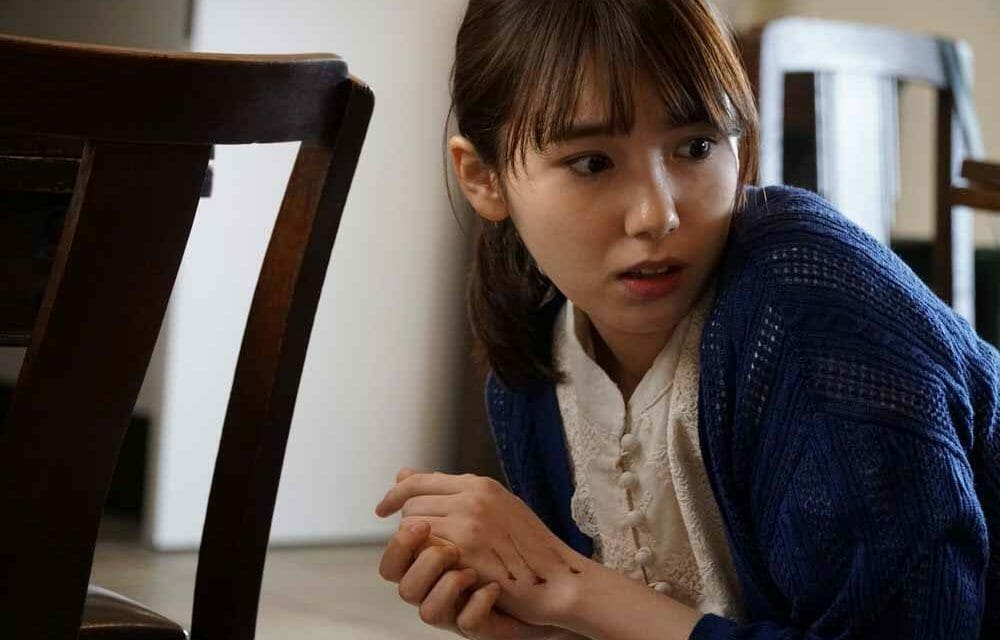 Of course, our heroes soon learn the ghost’s name, and they too become haunted by the eye exploding Shirai-San. Now, with their lives on the line, they work alongside journalist Mamiya, to break the curse and save themselves from the wrath of Shirai-san.

Though we’re all familiar with the structure of the paranormal j-horror with a feminine, raven-haired ghostie, Stare is somehow able to miraculously avoid misstepping at every turn. The film remains engaging, entertaining, and surprising, without ever being able to break away from the shadows of its many predecessors. I’m constantly aware I’m watching a Ring-derivative, but the terror and sometimes sheer bravado of Stare keep me engaged and rooting for the film to end with a bang.

The credit rests entirely with our villain, Shirai-San. She should evoke giggles from the audience, with her cartoon proportioned bug-like eyes, she’s a cross between Sadako and one of those aliens from a Lisa Frank pencil case. She appears sometimes in broad daylight, sometimes up close, and sometimes in profile – showing us just how obtuse the prosthetic really is. But her stare is unblinking. It catches the light in absolute darkness, reflecting two totally wrong globes of white light down a darkened alley or hospital wing. The scariest thing about Shirai-San is her relentless, upfront presence. She’s baiting, goading, all with a silent stillness. She’s not afraid to let you Stare.

Shirai-San isn’t without her tricks though. Using the same rules as the ghosties from Mario Brothers, Shirai is able to sneak her way closer to eyeball-snatching by weakening the will of her bait, or merely playing the waiting game. And, if she’s feeling extra ruthless, goading them with the voices and eyeless faces of their dead loved ones. Peachy.

The ghost story at the heart of Stare is also pure, horror magic. Utterly simplistic and told with two animated index fingers by an enthusiastic narrator willing to act the story out, each time the story was re-told I literally felt goosebumps climbing up my back. The punchline is plain, simple and terrifying. It solidifies the story as basic-enough to be believably retold in a telephone tag of teens eager to terrify each other, unknowingly passing on a deadly curse.

Overall, Stare mystifies as a chilling, effective J-horror – even with a somewhat stale format. I’m not sure how Shirai-San plays so fresh with villains like Sadako and Kayako dominating the female-ghosts-seeking-vengeance sub-genre, but I jumped out of my seat enough times to certify this a solid spookfest.

Stare celebrated its world premiere at the 2019 Fantasia Film Festival Wednesday, July 17. The Fantasia Film Festival runs until August 1, 2019 in beautiful Montreal, Canada. Click HERE to check out all of our continued coverage of the festival, and be sure to follow us on Twitter, Instagram, and Facebook to see silly photos, immediate film reactions, and the occasional photo of lunch.

TLDR: tare mystifies as a chilling, effective J-horror - even with a somewhat stale format. I'm not sure how Shirai-San plays so fresh with villains like Sadako and Kayako dominating the female-ghosts-seeking-vengeance sub-genre, but I jumped out of my seat enough times to certify this a solid spookfest.