Have you ever watched a Godzilla movie and wondered what he would taste like? Probably very gamey and radiated. But cooked the right way, the King of the Monsters might be very tasty. Monster Seafood Wars (originally 三大怪獣グルメ) explores this possibility. It’s the latest zany project from writer/director Minoru Kawasaki, the man who brought us such titles as The World Sinks Except Japan, Executive Koala and The Rug Cop.

While on his way to deliver seafood, Yuta (Keisuke Ueda), the son of a sushi master, falls off his bike, dropping his delivery. The octopus, squid and crab in his basket escape, and somehow end up coming in contact with Setap Z, a chemical agent that transforms organic material to monstrous sizes. Tokyo is suddenly rampaged by these giant sea creatures, invincible to Japan’s military firepower. Yuta is recruited by S.M.A.T. (the Seafood Monster Attack Team), since he’s also the creator of the Setap Z serum, which he conceived as a solution to world hunger. Who would have thought the results would be so disastrous? 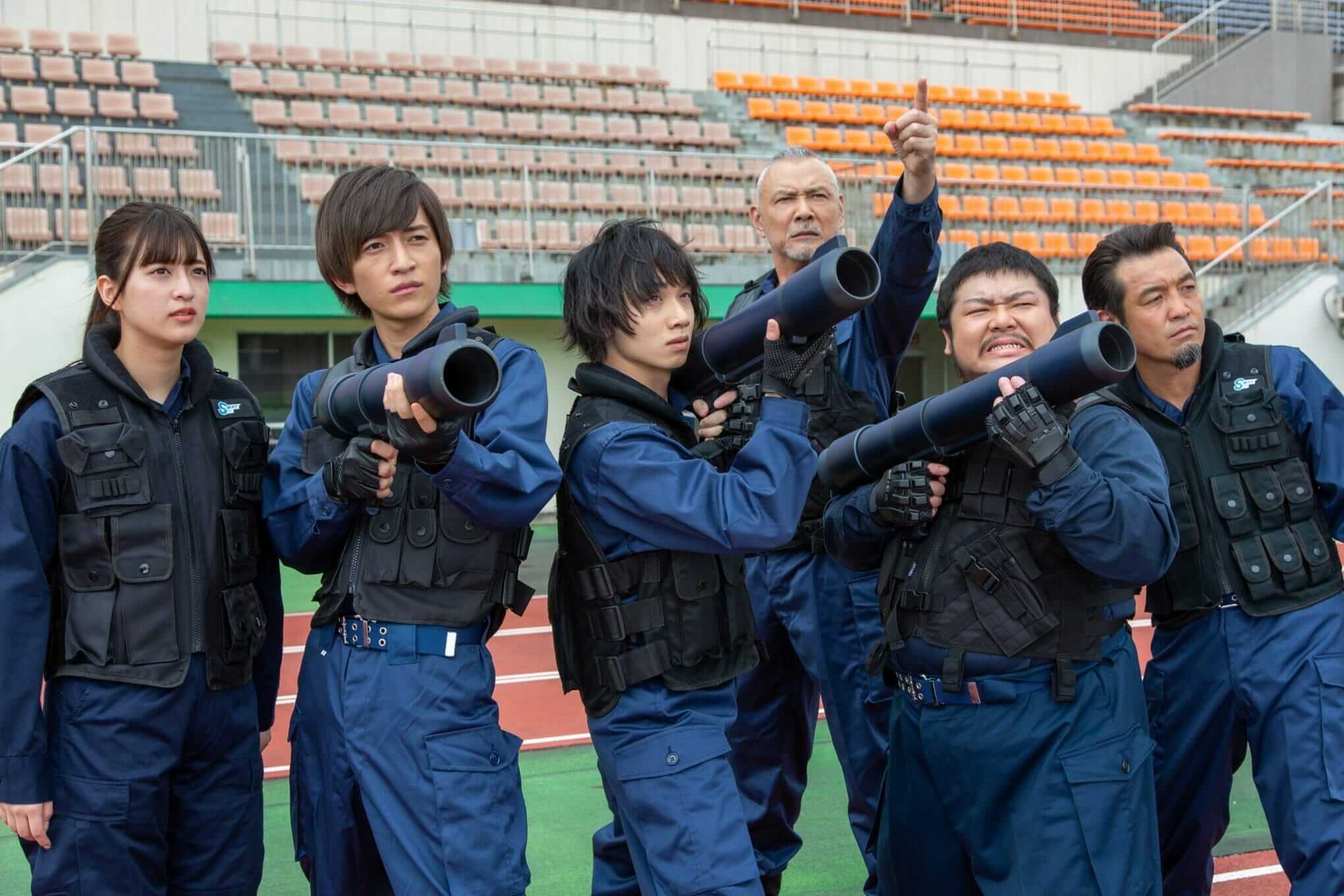 The team workshops different ideas of how to destroy these monsters, which they have nicknamed Ikalla (the squid), Takolla (the octopus) and Kanilla (the crab). Yuta suggests letting the monsters fight it out, since it would be easier to deal with the tired victor than all three at once. Yuta’s rival Hikoma (Yuya Asato) proposes blasting them with rice vinegar cannons. But then there’s the question of what to do with the monster’s severed limbs, lost during their battle. S.M.A.T. comes up with the idea of cooking the monster meat, coming up with various dishes to prepare them in. Surprisingly, their meat turns out to be delicious, and monster meat becomes the latest craze in Japan. The whole Japanese population jumps on the bandwagon for killing the monsters, for the sake of an unlimited supply of monster meat.

Most of the film’s budget was likely spent on the monsters’ colorful costumes. As is the case with most classic kaiju movies, there’s only about 20 minutes in total of the monsters fighting over a miniature Tokyo, the rest being filler scenes concentrating on the human characters. There’s the mandatory scenes in S.M.A.T. command center, with team members planning their next move and reacting to whatever is happening on the screen. There’s also the dramatic love triangle between Yuta, Hikoma and their co-worker Nana (J-pop idol singer Ayano Yoshida Christie).

“[Monster Seafood Wars] made me so hungry that I had to order some calamari just to calm my salivating mouth.”

In the absence of a big budget, the film heavily relies on exposition. Between the main action scenes, there’s a documentary exploring the aftermath of events, consisting of interviews with S.M.A.T. members, scientific experts, chefs and the Japanese prime minister. There are some special effects, but they are so badly done (maybe on purpose?). You can clearly see the white border around the giant tentacle superimposed over a shot of a jeep driving away.

What makes this movie stand out from other campy kaiju movies is the whole culinary aspect. When all the S.M.A.T. members sit down to taste test the monster meat dishes, one-by-one, each of them pull a face of amazement, and we hear their inner monologue exclaiming how it’s the best thing they’ve ever tasted. We then see several videos of internet food critics, who are at first skeptical of eating the flesh of the beasts ripping apart the city, but with a single bite, they’re convinced that monster meat worth the hype. It honestly made me so hungry that I  had to order some calamari just to calm my salivating mouth. It made me wonder if vegetarians would feel any sympathy for these poor monsters, the same we feel sympathy for Godzilla when he gets the pulp beat out of him by King Ghidorah. 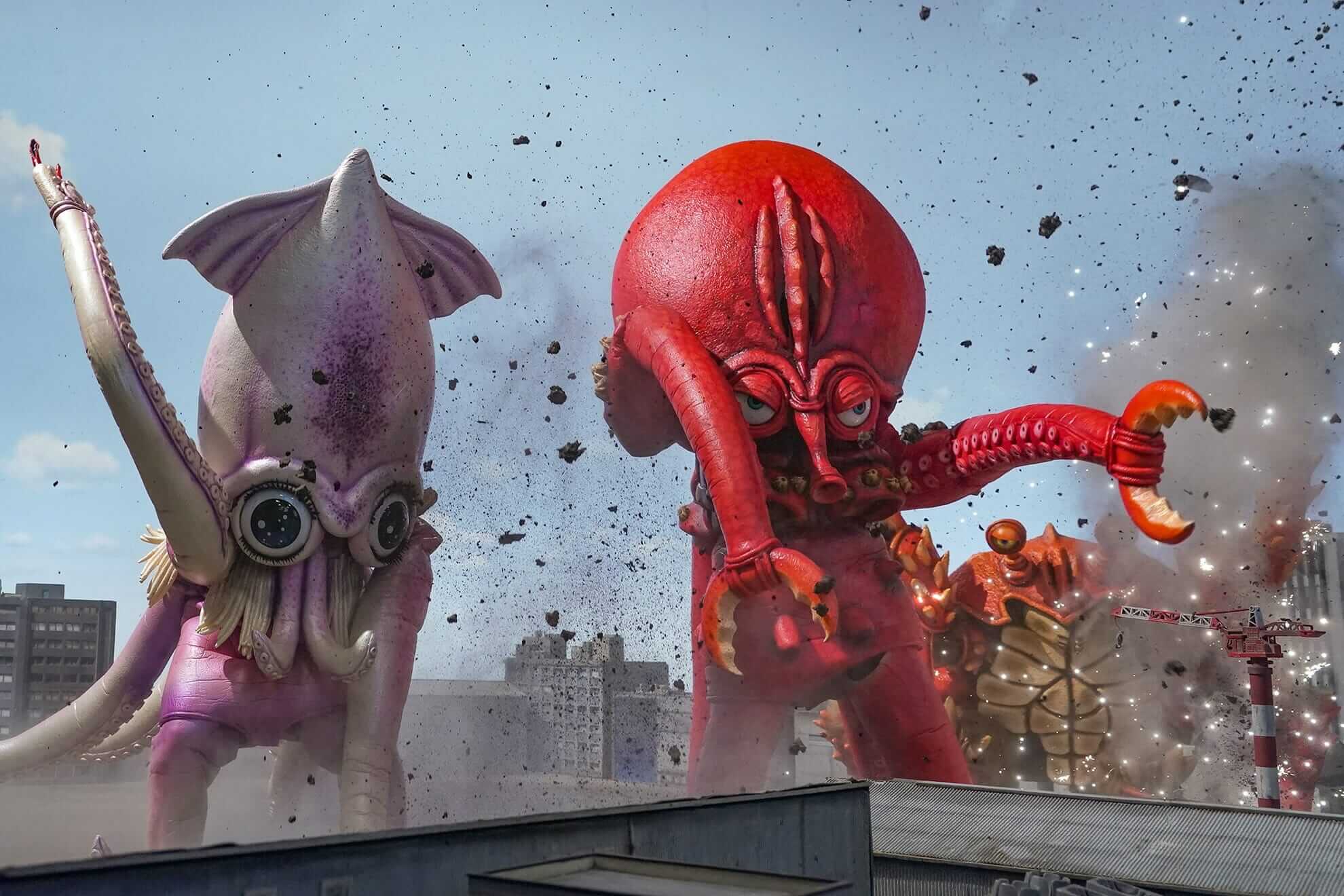 Such a ridiculous concept was not meant to be done with high production. I would have liked to see more kaiju action and less talking, but overall, it’s good cheesy fun. If there was supposed to be some kind of social commentary about food consumption or internet trends or the consequences of science, I feel it got lost in the sea of hammy acting and cheap special effects. Don’t worry about that, just crack open a beer (or twelve) and giggle away.

Minoru Kawasaki’s Monster Seafood Wars celebrated its International Premiere at the virtual 2020 Fantasia Film Festival. Click HERE to follow all of our festival coverage, and let us know if you ever thought about eating Godzilla on Twitter, in the official Nightmare on Film Street Subreddit, and on Facebook in the Horror Movie Fiend Club! 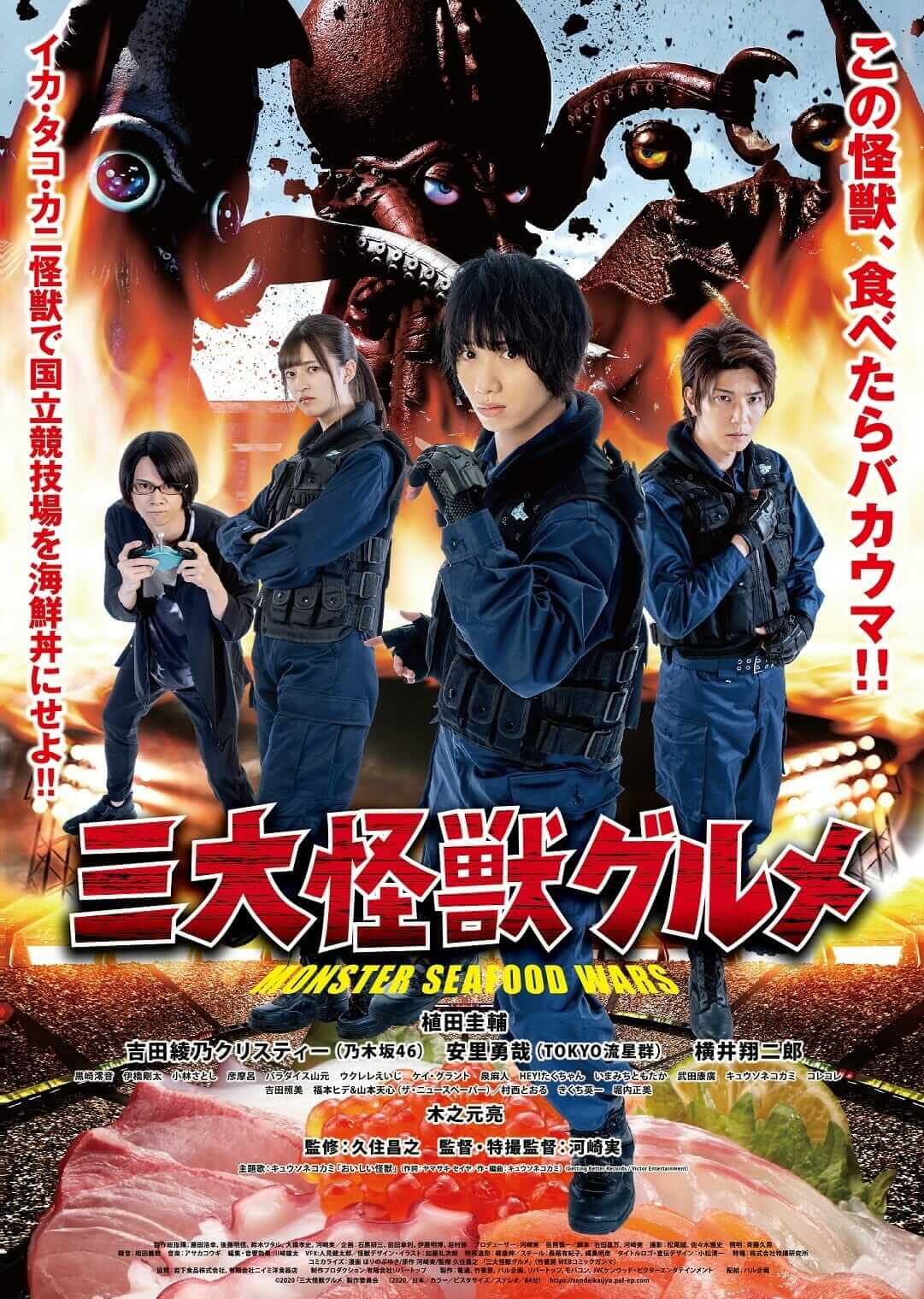 TLDR Such a ridiculous concept was not meant to be done with high production. I would have liked to see more kaiju action and less talking, but overall, it’s good cheesy fun. If there was supposed to be some kind of social commentary about food consumption or internet trends or the consequences of science, I feel it got lost in the sea of hammy acting and cheap special effects. Don’t worry about that, just crack open a beer (or twelve) and giggle away.