The zombie apocalypse can hit at any time, in any place. We’ve often seen outbreaks occur in large metropolises, where there is little hope of containment. But what would happen if the virus broke out in a more remote location, like a small suburb in Quebec, Canada? This is the starting point of the French-language satirical horror Brain Freeze, the debut feature for Julien Knafo. I was surprised to find out that there is no French version of the title, and when it’s uttered in the film, the character actually uses the anglicized “brain freeze” instead of “gel de cerveau.” Somebody better notify the Language Police.

Our story begins in the gated community on “Peacock Island” where the ultra-wealthy reside, along with the people who serve them. A corporation has developed an experimental fertilizer that melts snow and grows the grass quickly so the wealthy can golf all year round. What they don’t know is the green Re-animator goo they spray the golf courses with has infiltrated the water supply and is turning the residents of Peacock Island into green-eyed zombies.

“Like many zombie movies that have come out around this time, a lot of parallels can be drawn to the current pandemic.”

As this is happening, a teenage boy André (Iani Bédard) is forced to put down his phone and look after his baby sister Annie since their caretaker hasn’t shown up for work, and their single workaholic mother (Anne-Élisabeth Bossé) has her hands full as it is. André inadvertently avoids infection because he only drinks cans of Coca-Cola, and his sister is safe because his mom insists on mixing the baby formula with bottled water. However, Mom doesn’t have the same policy for her kale smoothies.

Meanwhile, public security agent Dan (Roy Dupuis, The Rocket) gets to put his survivalist training into practice as he fends off hordes of the infected. Unfortunately, his daughter Patricia (Marianne Fortier) worked at the golf resort– ground zero for the outbreak– and has become infected. Dan is determined to find a cure, but he puts himself at risk by bringing along his zombified daughter wherever he goes. To make matters worse, the army has bombed the only bridge off the island. The chances of survival are looking slim.

The first thing I noticed was how cool the zombies looked, especially in the advanced stages of decay. CGI is used to color their eyes green, but the rest of the look is achieved using makeup. Zombies ooze green blood out of every orifice, and some have grass and algae growing out of the sores in their skin. The zombies are very brittle and can be easily decapitated, though the kills aren’t too gory, since their blood has turned green, so it doesn’t look too realistic. It’s a good workaround to get younger eyeballs on the screen.

Like many zombie movies that have come out around this time, a lot of parallels can be drawn to the current pandemic. For example, the government tells the people to stay inside their homes but, of course, nobody does. One guy yells “ça va bien aller!“– Quebec’s motivational motto for when the pandemic first hit, which translates to “it’s going to be OK“– then is immediately set on fire by government agents. The film is chock-full of these dark comedic moments. 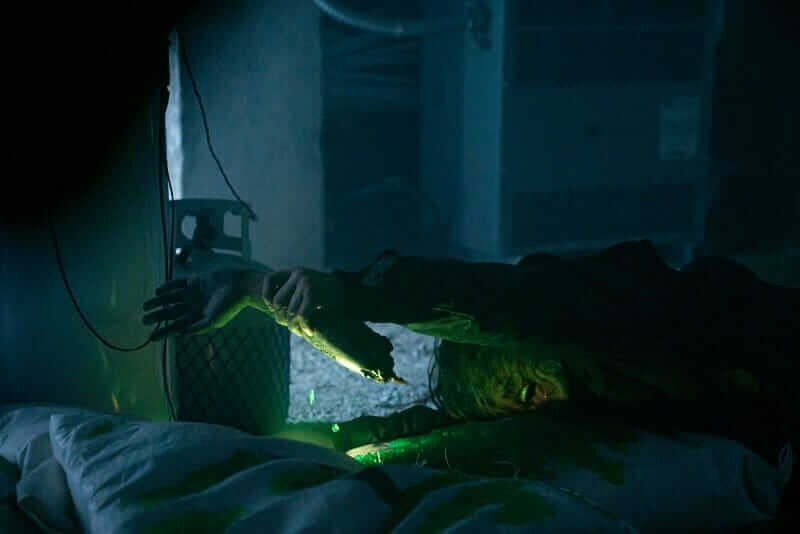 Dan regularly listens to a right-wing radio show, hosted by Patrick Nault (Simon-Olivier Fecteau). He’s quick to blame the outbreak on terrorists, while simultaneously advocating for the carpet bombing of the island to save the rest of the Quebec population. Like many racist talk show hosts found throughout Quebec, he questions the ethnicity of his callers, and therefore the legitimacy of their opinions, if he senses their accent isn’t 100% Quebecois. Cutting to the radio station is a smart way of informing the viewer on what’s happening off the island, but damn, you just love to hate that self-important radio host. It’s also worth mentioning Mylène Mackay (Mafia Inc), who plays The Protocole, twin assassins dispatched to the island by the corporation to cover up their tracks.

The zombie subgenre has been done to death, then it was reanimated only to be killed once again. Still, Brain Freeze manages to pull off a few new tricks. I found it lot more enjoyable compared to the other Quebecois zombie film in recent memory, Les Affamés, namely for its political commentary on class, the shortsightedness of corporations, and the government’s poor crisis management. I also love Brain Freeze for its color pallette, blending bright greens and dark reds against the blinding white of the snow and the luxury homes. Being from Quebec myself, I thought it was a nice little window into our culture, and I’m curious to hear how people outside of La Belle Province reacted to it.

“The zombie subgenre has been done to death, then it was reanimated only to be killed once again. Still, Brain Freeze manages to pull off a few new tricks.”

Brain Freeze celebrated its World Premiere at the 2021 Fantasia International Film Festival as the festival’s opening film. Click HERE to follow all our festival coverage and let us know if you think the zombie genre is dead over on Twitter, Reddit, Facebook, and in the official Nightmare on Film Street Discord. Not a social media fan? Get more horror delivered straight to your inbox by joining the Neighbourhood Watch Newsletter.

TLDR The zombie subgenre has been done to death, then it was reanimated only to be killed once again. Still, Brain Freeze manages to pull off a few new tricks. I also love Brain Freeze for its color pallette, blending bright greens and dark reds against the blinding white of the snow and the luxury homes. Being from Quebec myself, I thought it was a nice little window into our culture, and I'm curious to hear how people outside of La Belle Province reacted to it.