In Jesse Thomas Cook’s goofy action-thriller Cult Hero, disgraced “cult buster” and deprogrammer Dale Domazar (Ry Barrett) is called up out of retirement for one last job. After a botched extraction of a sadistic death cult that resulted in mass suicide, Dale has become the internet’s punching bag.

Once a celebrated pop culture icon, Dale has spent the last several years wallowing in the woods drinking beer and blaming everyone but himself. But when he receives a call for help from a woman whose husband has been indoctrinated by a dangerous new-age cult, he loads a tiny arsenal of guns into the trunk of his Chevelle Laguna S-3 and gears up for the comeback special of a lifetime.

Dale Domazar is a Neopolitan triple-scoop of Dog The Bounty Hunter, Dirty Harry, and Macho Man Randy Savage. He’s gruff, he’s arrogant, he’s armed to the teeth…but he also happens to be the right man for the job. Ry Barrett swirls those hulking personalities together in a hilarious, over-the-top performance that will have you giggling from start to finish.

The action star wardrobe, the renegade cop squint, the excessive emphasis of every. single. word. Dale “Cult Buster” Domazar is a walking talking tough guy cliche that Barnett dials up to a cartoon level like he’s cutting promos for the WWF in the late 80s.

Dale Domazar is the main attraction of Cult Hero but the heart of this zany story is local real estate agent, and all-around Karen, Kallie Jones (Liv Collins). Kallie isn’t a bad person. She’s as depressed as her husband but she takes it out on retail employees, servers, and little girls that don’t have permits for their lemonade stand. On paper, she’s a hard person to feel bad for but Liv Collins gives the character a depth that is downright charming.

And, of course, She doesn’t realize what kind of trouble she’s welcomed into her life when she drops her husband off at the Hope Acres retreat but after her husband Brad is effectively kidnapped and put on a conveyor belt of culty weirdness that will surely lead to sacrificial murder, Kallie is forced to roll up her sleeves, load up a shotgun and bust this cult with Dale.

Indie film fans have been singing the praises of Lowell Dean’s Wolfcop and Jason Eisener’s Hobo With A Shotgun for years now. If those two guys have their faces carved on the Mount Rushmore of Canadian Exploitation, Jesse Thomas Cook would be right beside them. Cook’s 2011 feature Monster Brawl is a Wrestlmania-inspired horror comedy that pits classic movie monsters against each other in the ring (complete with blow-by-blow commentary from Kids in The Hall‘s Dave Foley!).

More recently, The Hoard (co-directed with Matt Wiele) lampooned ghost hunters and everything you love (and hate) about reality tv. Cook’s films have always had a quirky Saturday-morning-cartoon sense of humor, geared specifically toward adult horror fans.

That’s all a long-winded way of me saying Get your ass to Letterboxd and add his movies to your watchlist now, you fools! because Cook knows how to make a fun, funny movie. Not every cult movie has to be dower, and dreary, and loaded with metaphors. Treat yourself to something kooky for once. Cult Hero is a rock em sock em good time filled with gut-busting gags. It’s got creepy cult assassins, .357 magnums, and silly send-ups of every action movie trope in the Hollywood handbook. Heck, it’s also got one hell of an earworm and some rad practical effects right up top if you’re interested in seeing a dude get his arms and legs pulled off (and I’m pretty sure you do).

Jesse Thomas Cook’s Cult Hero celebrated it’s world premiere at the 2022 Fantasia Film Festival. Click HERE to follow out continued coverage of the festival and be sure to let us know if you’re excited to see Cult Hero over on Twitter, Reddit, Facebook, and in the official Nightmare on Film Street Discord. Heck, while you’re at it, follow up on TikTok for bit-sized horror content! 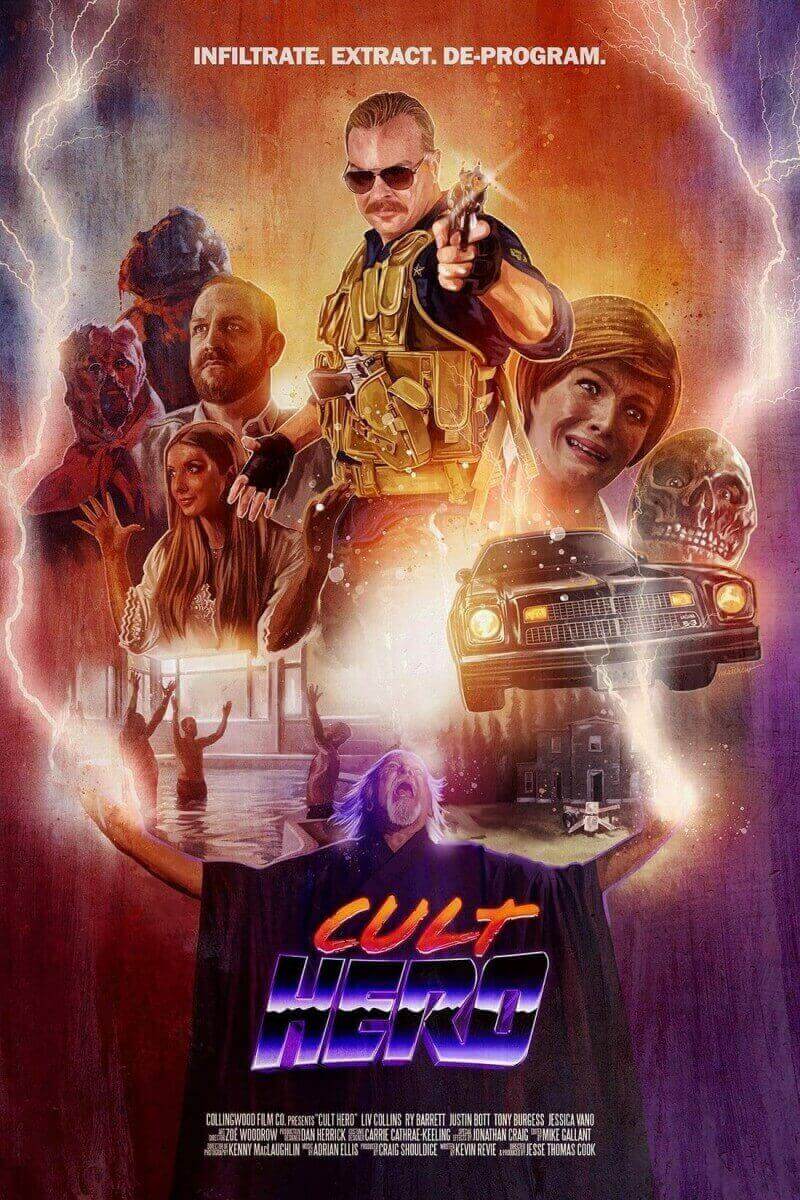 TLDR Not every cult movie has to be dower, and dreary, and loaded with metaphors. Treat yourself to something kooky for once.  Cult Hero is a rock em sock em good time filled with gut-busting gags. It's got creepy cult assassins, .357 magnums, and silly send-ups of every action movie trope in the Hollywood handbook. Heck, it's also got one hell of an earworm and some rad practical effect right up top if you're interested in seeing a dude get his arms and legs pulled off (and I'm pretty sure you do).