With technology ever-increasing, it’s no surprise Found Footage’s younger cousin — the screenlife movie — has been charging full-steam ahead. We’ve traded analog and shaky handheld cameras for shaky handheld iPhones and computer desktops. Instead of our characters getting lost in the woods, they’re getting lost in the dusty archives of Wikipedia. Instead of meeting up to interrogate someone, characters are sliding into the dms of perps to blackmail them with incriminating emails.

Movies like Unfriended (2014), Searching (2018), and Spree(2020) (to name a few) have all explored the dark depths of our small screens.  (Including the upcoming Dashcam that my co-host Jonathan Dehaan reviewed out of Popcorn Frights)

#Blue_Whale (#ХОЧУВИГРУ), from first-time feature filmmaker Anna Zaytseva, stirs up the screenlife pot by mixing in an alarming and elusive creepypasta to the mix; an underground game that isolates and cajoles melancholic teens and tweens toward suicide. 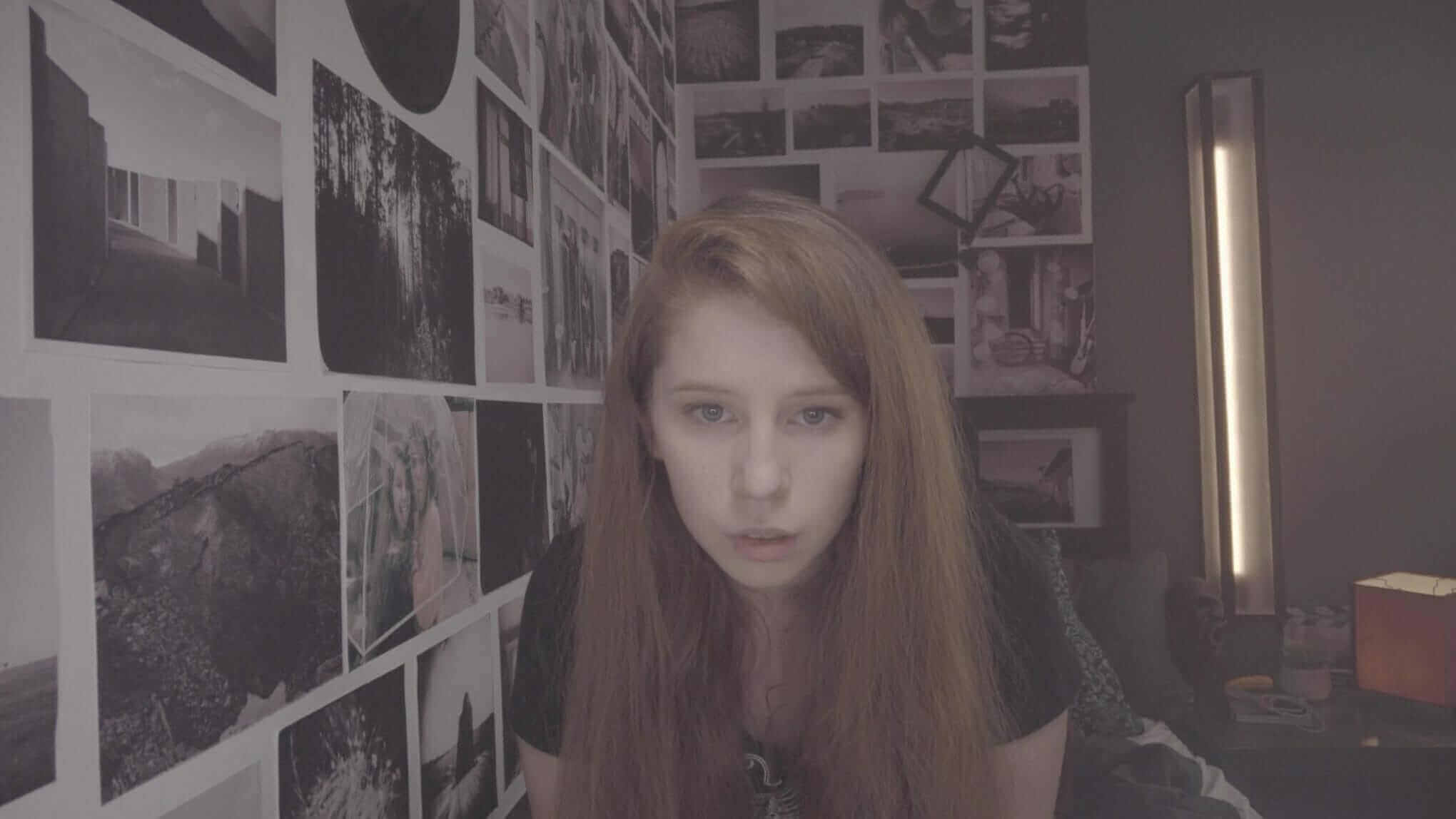 #Blue_Whale follows high schooler Dana (Anna Potebnya), who hunts down and infiltrates the sinister ‘Blue Whale Challenge’ after the sudden decline and shocking suicide of her younger sister. In order to decode the online profiles and determine the identities of the game’s admin, she must lay low and follow along with the challenge’s increasingly depraved daily tasks.

As she falls deeper into the grip of the Blue Whale game, Dana will be coerced to sacrifice friendships, test her already strained relationship with her mother, and maybe even destroy her own life if she wants to find out who was really behind her sister’s suicide. 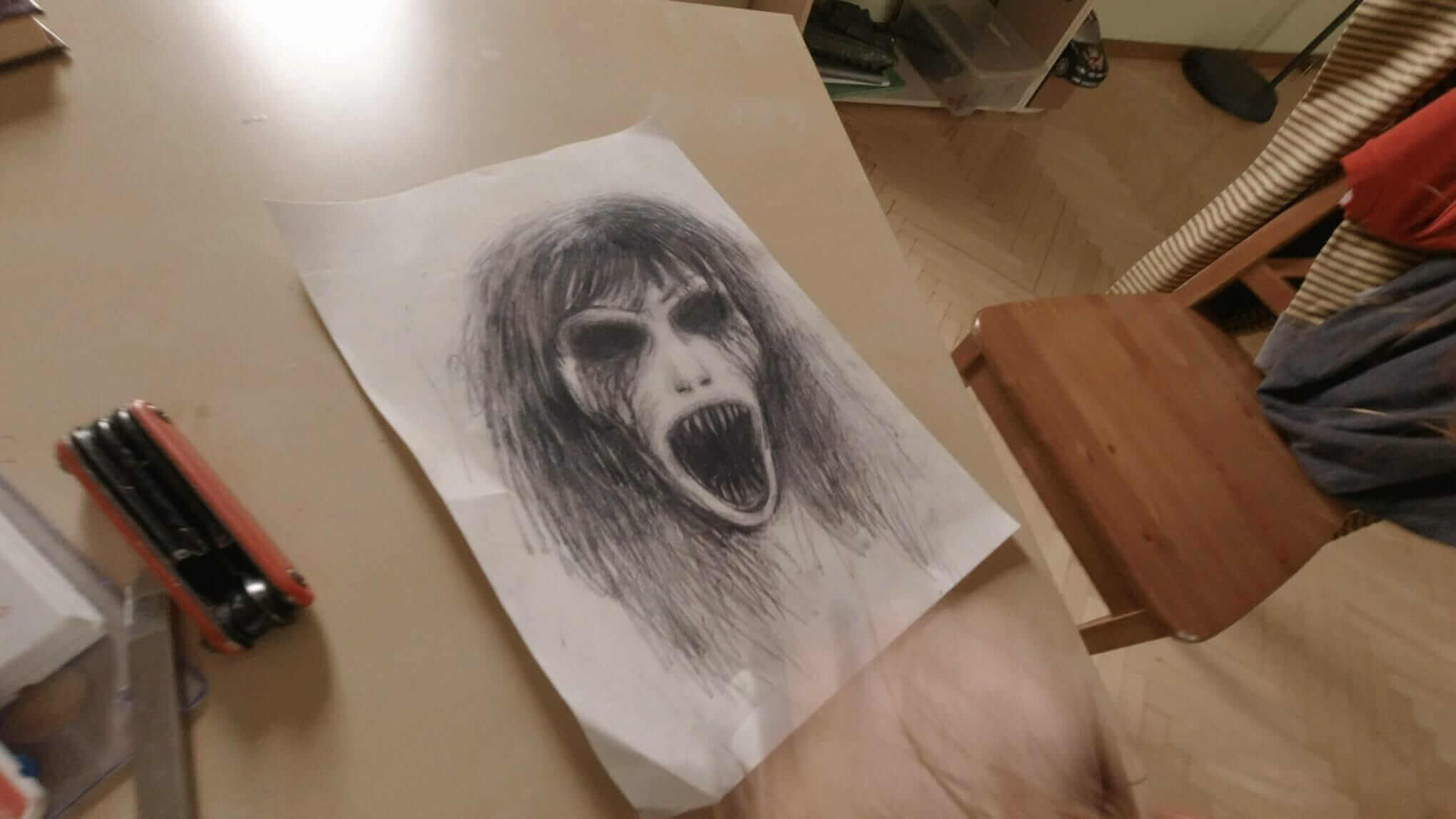 #Blue_Whale is inspired by a very real phenomenon that first popped up on the internet in 2016. Though some news outlets claimed it was as real as the Ice Bucket Challenge or Planking, the truth is much more grey, resulting in something that ended up as part Satanic Panic, part Creepypasta.

The gist of the game is this – players who opt into the secret game, which plays out over Facebook (or VK, the Russian-based social network), are assigned a series of daily tasks over a 50 day period. These tasks start small and inconsequential. Like chickening out and saying ‘Truth” in a game of Truth or Dare.  The tasks don’t stay that harmless, however. Escalating in an attempt to isolate, shame, and break down its already vulnerable player base. These tasks continue in their spiral toward depravity; betray a friend, cross the street in oncoming traffic, cut yourself – until the final day. The task to commit suicide. 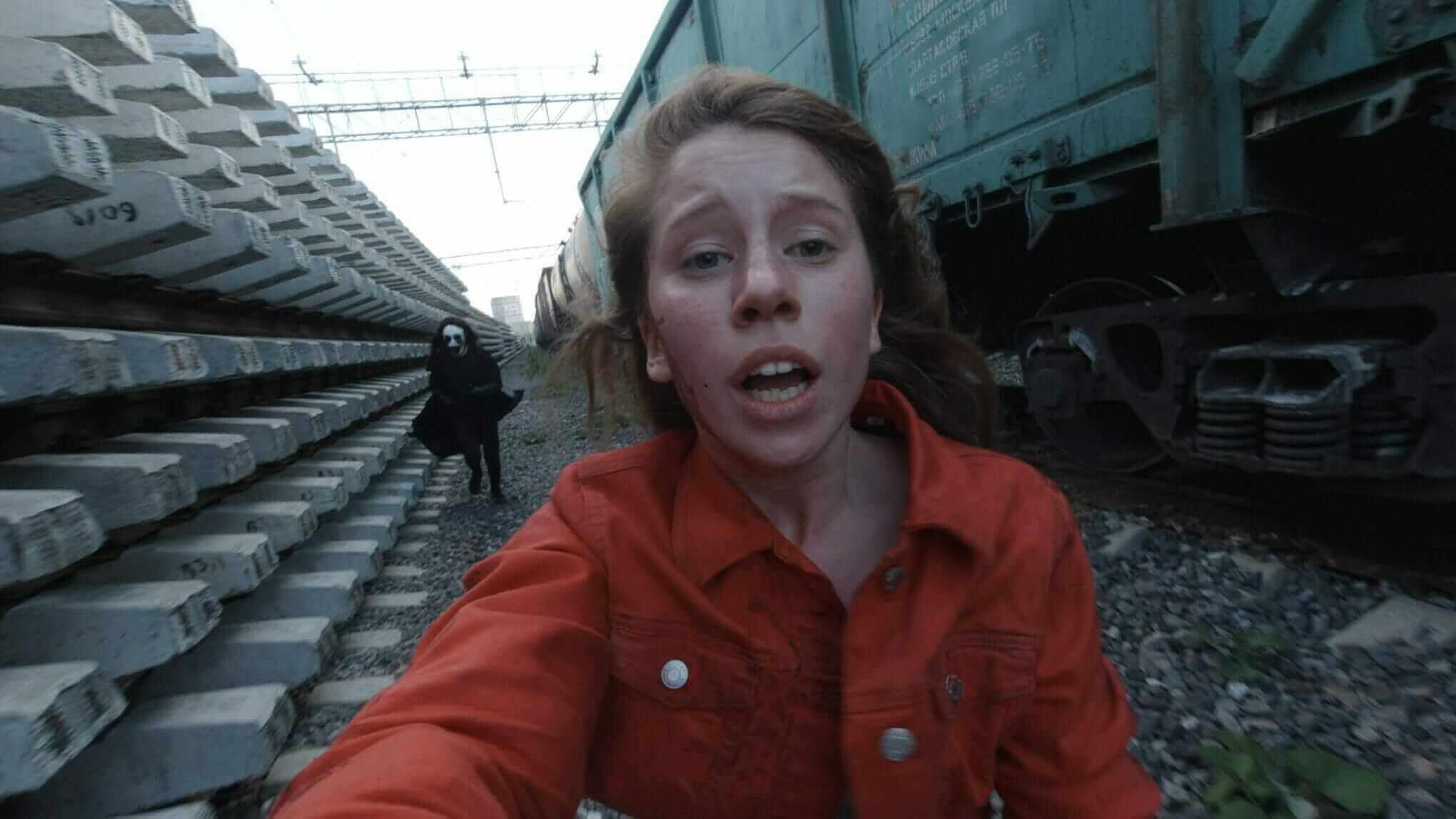 #Blue_Whale lives out the horror of this urban legend through the screens of Dana’s tumultuous journey, chaotically transporting us from Facetimes, to Zoom calls, to Facebook Profiles, to Articles, and then Livestreams out in the #realworld. Zaytseva weaves in and out of screenlife’s complicated format with such an ease that one could argue the pace is almost too swift. Dana’s a gal on a mission, and sometimes she gets ahead of us. Though it should be said- most Found Footage films lean too heavily on atmosphere and not heavily enough on content, so the fact that #Blue_Whale is a chaotic ride of twists and turns isn’t really a downside.

And with #Blue_Whale’s intricate mystery, we’re lucky we have Dana at our side. A headstrong, relentless force who gives Nancy Drew a run for her money, Dana isn’t afraid to be foolhardy for the greater good, hitting the pavement at top speeds and running all over town with her iPhone locked on RECORD. Anna Potebnya captivates in the role, tapping into fleeting moments of vulnerability before careening back into a driving curiosity of a headstrong girl on a mission. She lights up the browser every chance we get to see the camera on selfie mode. 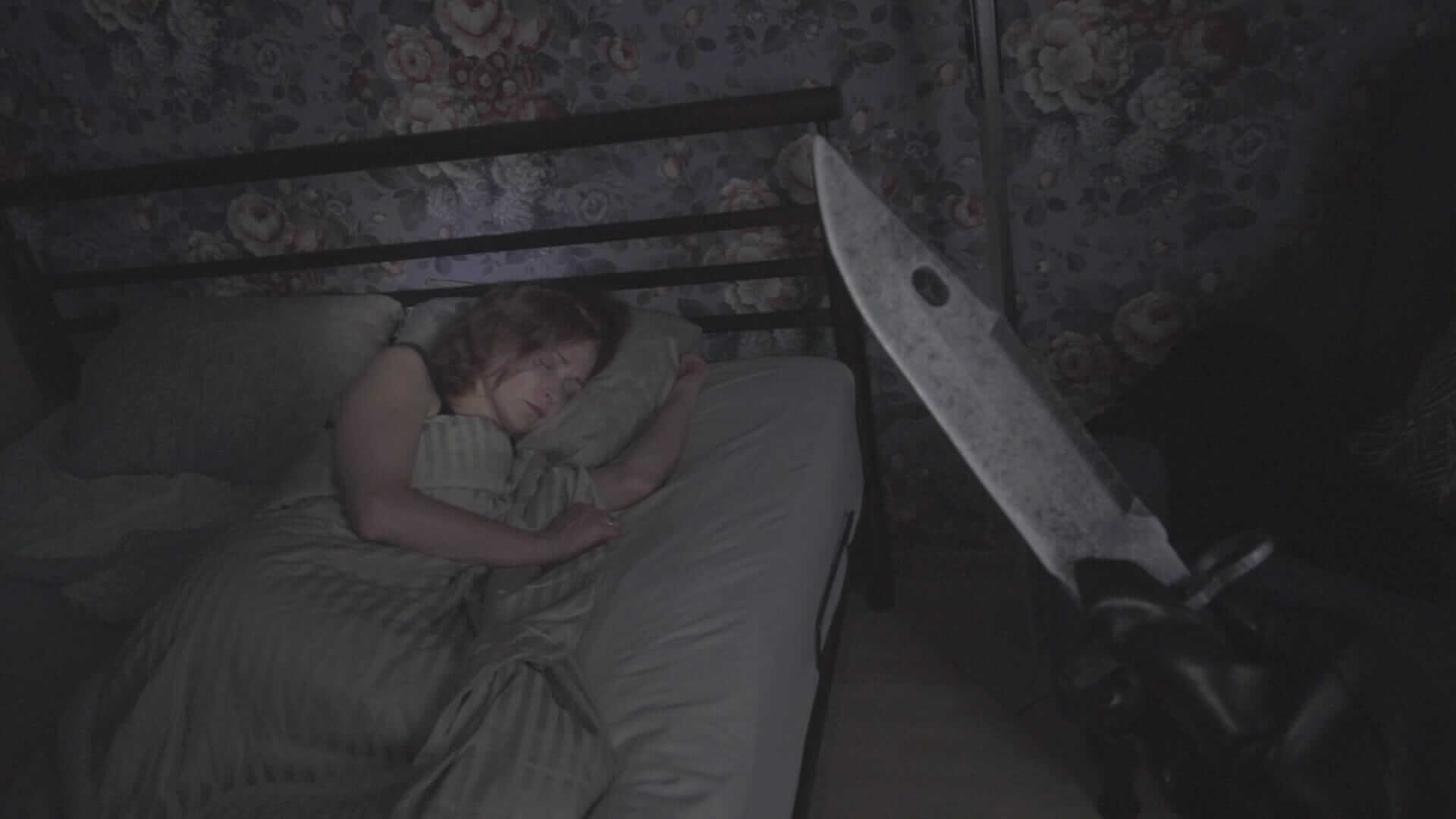 #Blue_Whale does fall a bit into a whodunnit trap that feels less like a phenomenon and more like an isolated incident of power trips and mind games, but still keeps us at the edge of our seats while we work our way there. It helps that Ada, the foe and mastermind behind Dana’s ‘Blue Whale Challenge,’ happens to wear a mask that’s pure nightmare fuel.

“..a terrifying journey into the dark alleys of an internet uninhibited.”

Overall, #Blue_Whale is a terrifying journey into the dark alleys of an internet uninhibited. There are no ghosts, no demons-  just people and the terrifying limitless of the internet.

celebrated its World Premiere at The 2021 Fantasia International Film Festival. Are you a fan of online Found Footage frights? Let us know your favorites over in the Nightmare on Film Street discord! Follow all of our Fantasia coverage here so you don’t miss out on the upcoming horrors headed your way! 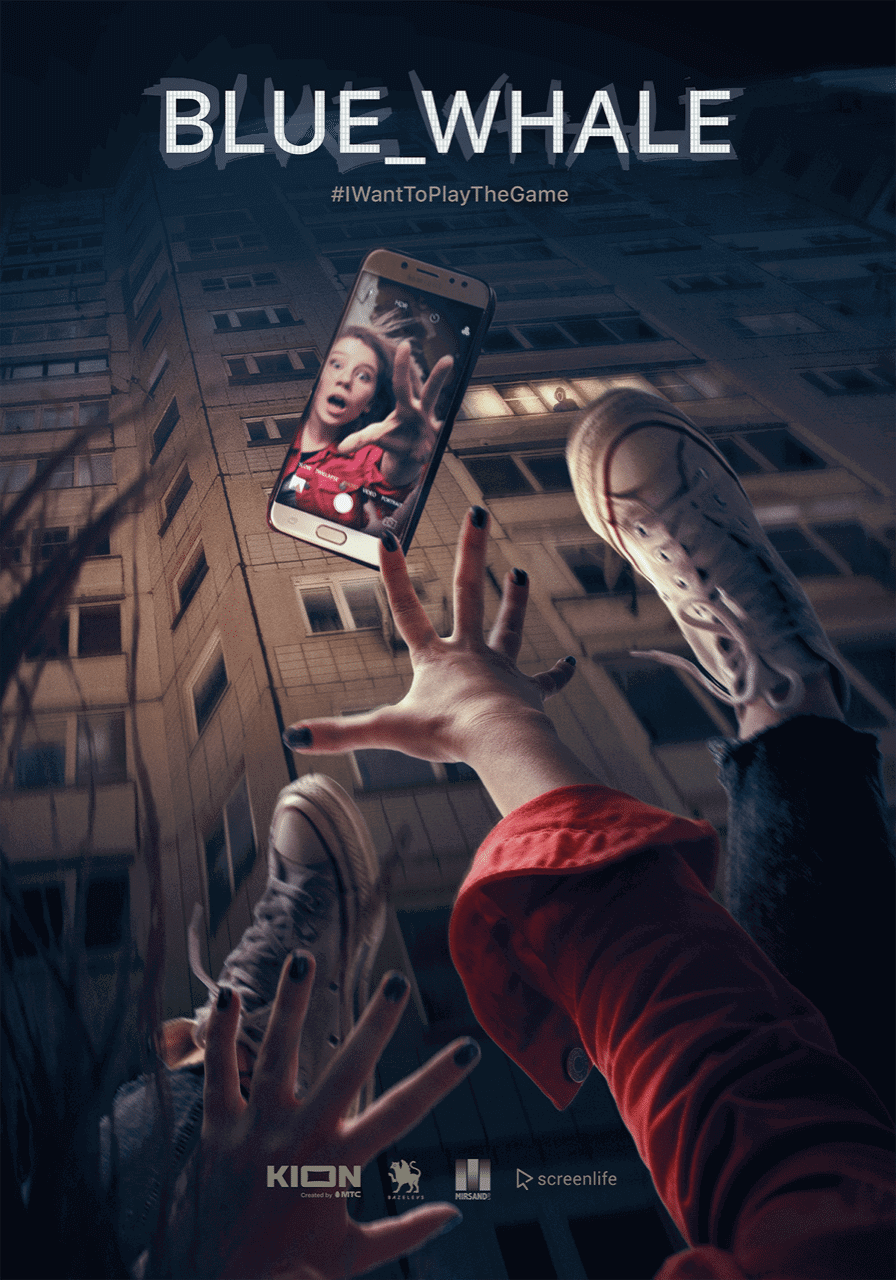 TLDR #Blue_Whale is a terrifying journey into the dark alleys of an internet uninhibited. There are no ghosts, no demons-  just people and the terrifying limitless of the internet.