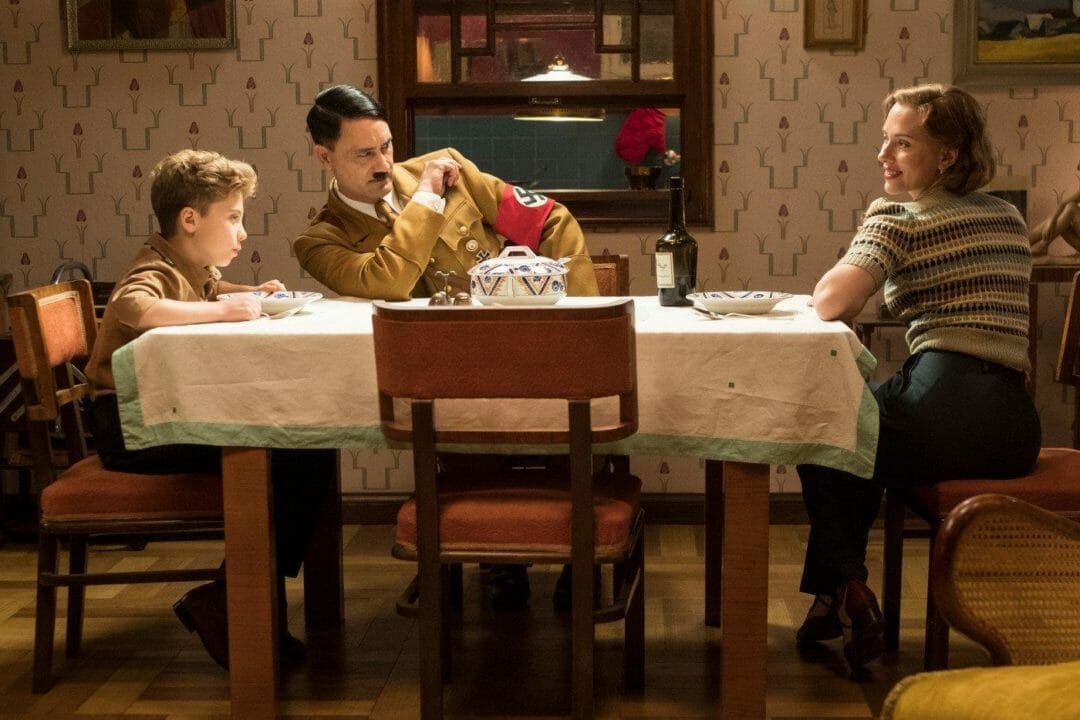 There is something every horror fan understands – the world needs to laugh at terrible things. Not a horror film at all, but a darkly whimsical satire, Jojo Rabbit forces the world to laugh at very real, very terrible things. With its corners softened and warning sweetened with comedy, writer/director and star Taika Waititi delivers a timely message about humanity and the very real danger of prejudices left unchecked. Audiences are asked to revisit a world so familiar we’ve become numb to its warning, from the most naive, honest perspective imaginable. The eyes of a 10-year old boy.

JoJo (Roman Griffin Davis) is a Nazi. He’s also ten. A position our minds typically reserve for the plainly evil, JoJo Rabbit has us follow JoJo on his journey to becoming the best Nazi he can be; pleasing his Führer. Like many ten-year-old boys, JoJo’s imagination has conjured an invisible friend, Adolph Hitler himself (played by Taika Waititi). Only, Jojo’s Adolph isn’t Hitler at all. Aloof, immature, and full of the naive ego of a young boy, Adolph represents JoJo’s conscious mind trying to do what is right, what is good, and what his country expects of him. And in Germany during the climax of World War II, that means believing those who are Jewish are less than human for merely existing on the same planet.

JoJo has never interacted with a Jewish person post their entire culture’s dehumanizing. He hates them openly, as his country expects of him, but how would he know a ‘Jew’ when he saw one? How would he know who to hate, who to kill? As JoJo soon learns, a good sign you’ve seen a ‘Jew’ is if they’re living in the walls and coming out of a secret door cut into the upstairs bedroom wall. Elsa (Thomasin McKenzie), a teen girl forced into seclusion and hiding out in the home of Jojo’s loving mother (played by Scarlett Johannson), quickly becomes the subject of JoJo’s study. Writing an expose on Jews (because he can’t rat out Elsa, lest his mother get taken away by the Gestapo), JoJo will reluctantly learn to humanize the vilified and question everything his universe has told him was right and good.

Of course, Elsa, being seventeen years old, won’t make it easy for this ten-year-old Nazi boy tapping at her bedroom wall. She’ll weave tall tales and scary stories to JoJo in the way any teenage girl would tease her young, annoying housemate. But as the pair spend more and more time together, their bond grows. JoJo’s Hitler will slowly deflate, losing the power and might JoJo initially conjured. JoJo will be forced to confront the very real Hitler, and his very real ideology, with his eyes open for the very first time.

“Taika Waititi is hilarious as JoJo’s Hitler, staying aloof and silly enough to never offend, but still to confront us with the presence of the world’s greatest Boogyman.”

Taika Waititi is hilarious as JoJo’s Hitler, staying aloof and silly enough to never offend, but still to confront us with the presence of the world’s greatest Boogyman. He is, dare I say, charming as a ten-year-old’s dictator, never quite capturing the entire essence, but instead being an amalgamation of young boy’s only father figure in an upside-down society. Hitler only appears as a fantasy, and in being so, he is closer to the Fawn of Pans Labyrinth than a real interpretation of Hitler.

Roman Griffin Davis’ JoJo is sweet as the blind-believer; a hard-to-hate boy full of hatred. Like his character is confronted with the grey area of hate, as are we too — Nazis are our big baddie. Every Nazi is awful, despicable, evil. But JoJo is just a boy. He does silly boy things, and has silly boy moments. Is he too, awful, despicable, and evil? Heartfelt and wonderfully confronting, JoJo Rabbit envelopes sensitive subject matter with very human characters whose story has yet to be told in a tome of dusty stories we’ve all heard before, but their message our current society still seems to struggle to head. The very controversy that surrounded the initial announcement of this film, is a very real sign we need it. Art and Humor are powerful tools we have to comment and reflect on the damaging and dark aspects of society. Satire should not be a dirty word.

Yes, JoJo Rabbit is a dangerous film to make, and one very many audience members will be trepidacious to see. But that feeling is good, and we should invoke it. Like JoJo, we need to stare what we hate in the face. Doing so forces us to question why we hate it, what it is, and where that hatred comes from. Do we hate it because everyone else does? Do we hate it because the world tells us to? Are we right to hate it? Should we continue to hate it?

“JoJo Rabbit, and films like it, force us to look at the past with a renewed and reinvigorated horror of a message we should all actively remember.”

The Nazi regime taught us bigotry and hatred, when left unchecked, can infect society to monumentally horrendous proportions. Our lack of questioning, our want to “not get involved” to not “feel uncomfortable” and not to question how these things come to be, allow those whispers to become the undercurrent and the growing rumble of a divided society, one that refuses to look its opponent in the face until they’ve become too powerful to do anything but continue to cower. JoJo Rabbit, and films like it, force us to look at the past with a renewed and reinvigorated horror of a message we should all actively remember. Art, Film, and Comedy are our most powerful tools to remain completely and utterly human.

JoJo Rabbit celebrated its U.S. premiere at the 2019 Fantastic Fest in Austin, Texas. Read all of the coverage of our festival here, and join the conversation with the Nightmare on Film Street community over on Twitter, Reddit, and in the Horror Movie Fiend Club! TLDR ..A darkly whimsical satire, Jojo Rabbit forces the world to laugh at very real, very terrible things. With its corners softened and warning sweetened with comedy, writer/director and star Taika Waititi delivers a timely message about humanity and the very real danger of prejudices left unchecked. Audiences are asked to revisit a world so familiar with we've become numb to its warning, from the most naive, honest perspective imaginable. The eyes of a 10-year old boy.