The madman mine is back in Damien Leone’s Terrifier 2. Art The Clown, portrayed by David Howard Thornton, returns for another Halloween massacre through the small town of Miles County. If you thought Terrifier (2016) was “disgusting and kinda f*cked up” (an actual quote from my father) you might want to stay far, far away from this delightfully deranged return to the wild world of Art.

Picking up where Terrifier (2016) left off, Art The Clown is revived (somehow) before disappearing mysteriously. But not before he turns a coroner into minced meat, and makes a pit stop by the laundromat to clean his blood-soaked outfit. A year later, just days before Halloween, Art makes his triumphant return. In the months since his rampage, he has gained a bit of a cult status in the minds of true crime fans and preteen weirdo Jonathan Shaw (Elliot Fullam) who wants to dress up as Art for Halloween. His mother and sister Sienna (Lauren LaVera) are adamantly against the idea partly because it’s a little macabre to celebrate a real-life serial killer, but also because Sienna has been having terrifying dreams about the renegade killer clown.

“Terrifier 2 is the kind of movie that you will either love or never recover from.”

Big surprise, Art rolls into town ready to party. He’s got a new bag of tricks slung over his shoulder and a weird little sidekick that is maybe a hallucination but also maybe an evil demon spirit(?). Before you can say Happy Halloween” he’s skinning people alive, throwing roadkill at children, and running amok at Spirt Halloween. He shoots a Tommy Gun, sets people on fire, and even sneaks razor blades into a box of breakfast cereal. Art‘s a busy boy in Terrifier 2 and thanks to the mad genius of Writer/Director/ Effects Maestro Damien Leone, it’s all done using stomach-turning practical effects.

It’s all a bunch of fun until Story gets involved. Frankly, no one is coming to Terrifier 2 for an Academy Award-worthy monologue but good luck trying to make heads or tails of the finer points of this movie’s story beats. The best explanation I’ve come up with is that everyone on screen, from Art down to his new Final Girl Sienna, suffers from psychosis. There are so many wtf?! moments that at some point you have to just throw in the towel and shift your brain down into a very, very low gear. And with an absurd runtime of 2+ hours, there is A LOT of nonsense to wade through. My eyes damn near popped out of their sockets when I saw that runtime but, thankfully, the movie is also loaded with hyper-violent, cartoonishly creative kills. 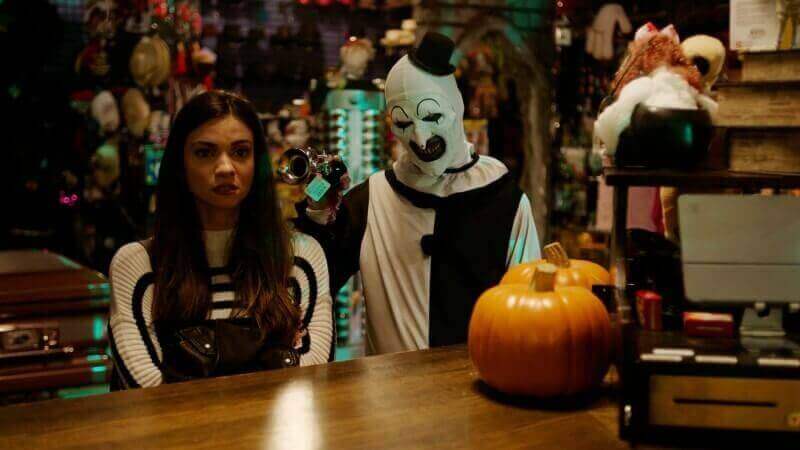 The violence of Terrifier 2 really runs the gamut. From senseless to sensational, grisly to goofy, horrifying to hilarious, this movie has it all. In one scene I went from muttering “Oh no, I don’t like that…” to laughing my head off. Such is the rollercoaster of Leone’s unique brand of savage storytelling. In some respects, those creative kills and the nutty heightened performance from David Howard Thornton bridge the gap between Troma fans and the Extreme Horror crowd. It’s got a few beats that might suck your soul out through your eyeballs but if you can remind yourself that it’s only a movie, it’s only a movie, only a movie- you’ll find that it’s also pretty damn funny for being such a disgusting gorefest.

Terrifier 2 is as shaggy as any slasher sequel, but it also kind of relishes in its absurdity. It steers into the skid and isn’t afraid to get weird. You want weird, unexplainable grossness? You got it! You need blood, guts, and other assorted viscera? It’s all yours! Terrifier 2 is the kind of movie that you will either love or never recover from. It’s an hour longer than any horror needs to be but in that extra hour, you’ll find special effects designed to make you stark-raving mad. What the movie lacks in explanation it makes up for in execution. And, spoiler alert, people are executed…

Terrifier was the grossest horror movie ever made until Terrifier 2 came along, so Happy Halloween fella sickos! This oddball sequel his theatres October 6, but celebrated its world premiere at Fantastic Fest 2022. Click HERE to follow our full coverage of the festival and be sure to let us know if you’re excited to see the gruesome returns of Art The Clown over on Twitter, Reddit, Facebook, and in the official Nightmare on Film Street Discord. Not a social media fan? Get more horror delivered straight to your inbox by joining the Neighbourhood Watch Newsletter.

TLDR Terrifier 2 is as shaggy as any slasher sequel, but it also kind of relishes in its absurdity. It is the kind of movie that you will either love or never recover from. It's an hour longer than any horror movie needs to be but in that extra hour, you'll find special effects designed to make you stark-raving mad. What the movie lacks in explanation it makes up for in execution.