In a time where nothing is certain and a global pandemic continues to spread through much of the world, a little escapism is a welcome respite. In honor of its 15th anniversary, I recommend revisiting Steven Spielberg’s remake of the sci-fi thriller War of the Worlds (2005), based on the original novel by H.G. Wells and Orson Welles’ subsequent radio drama. Starring Tom Cruise (The Mummy) as a disheveled blue-collar dad named Ray and a young Dakota Fanning (Coraline) as his precocious, too-smart-for-her-own-good young daughter Rachel, the film is a surreal, extra-terrestrial packed exploration of how quickly the world can flip upside down amidst mass chaos. Spielberg and Cruise had previously worked together on Minority Report (2002), so this film was a reunion for the A-list duo.

War of the Worlds delivers on the pacing that is inherently promised in a Tom Cruise film, launching into action a mere fifteen into the story. The fantastical element of aliens dials the intensity up to 10 and showcases the fragility of human society’s structures and way of life (especially in an early visual in the film as a church is fully torn apart). The accompanying score by maestro and Spielberg mainstay John Williams adds drama, fear, and depth to the scenes that only Williams could do. The pairing almost makes the film feel like a companion of sorts to Close Encounters of the Third Kind (1977) and, to a much lesser degree but still worth mentioning given the alien element and family dynamic, E.T. (1982).

“There is something horrifyingly timely about revisiting this film in 2020. Right now, the world is being ravaged by an inhuman threat and we have no way to stop it.”

On the topic of family dynamics, War of the Worlds does a surprisingly good job at balancing the familial tensions between Ray, Rachel, and his older son Robbie, played by Justin Chatwin (Dragonball Evolution). The quieter scenes with the family help to establish grounded stakes during the alien attack (beyond the threat to the entire human race, of course). As every effort waged against the aliens fails, we watch a family forced to rely on each other more than ever – and sometimes split apart, as is seen in the moment Cruise reluctantly lets his son go fight with the army, barely grabbing his daughter in time to get to safety. The emotional beats of the story tie together intense, frightening action scenes with intimate small moments. In an interview with IndieLondon around the time of the film’s initial release, Tom Cruise was quoted as saying, “Right at the beginning we [Cruise and Spielberg] sat down and said ‘OK, how are we going to shoot this movie?’And we kind of explored different ways to do it. And I said ‘this story is about a family[…]”. Rooting a likable yet broken family at the heart of an alien attack was definitely a key decision that adds staying power to the film.

Even 15 years later, War of the Worlds contains some iconic imagery – notably, the eerie scene as Tom Cruise walks into a smoldering plane crash site just outside his door. Fun fact- if you find yourself in Hollywood whenever theme parks re-open, stop by the Universal Studios Hollywood Backlot Studio Tour. You’ll be able to swing by the set of the crashed Boeing 747 from War of the Worlds and experience the wreckage in person. Another terrifying scene occurs shortly thereafter when Rachel wanders down by a river and sees hundreds of dead bodies floating by, both her and the audience’s first real look at the traumatizing loss of human life at the hands of the alien invaders. Seeing that devastation through the eyes of a ten-year-old girl makes it all the more of a gut punch. 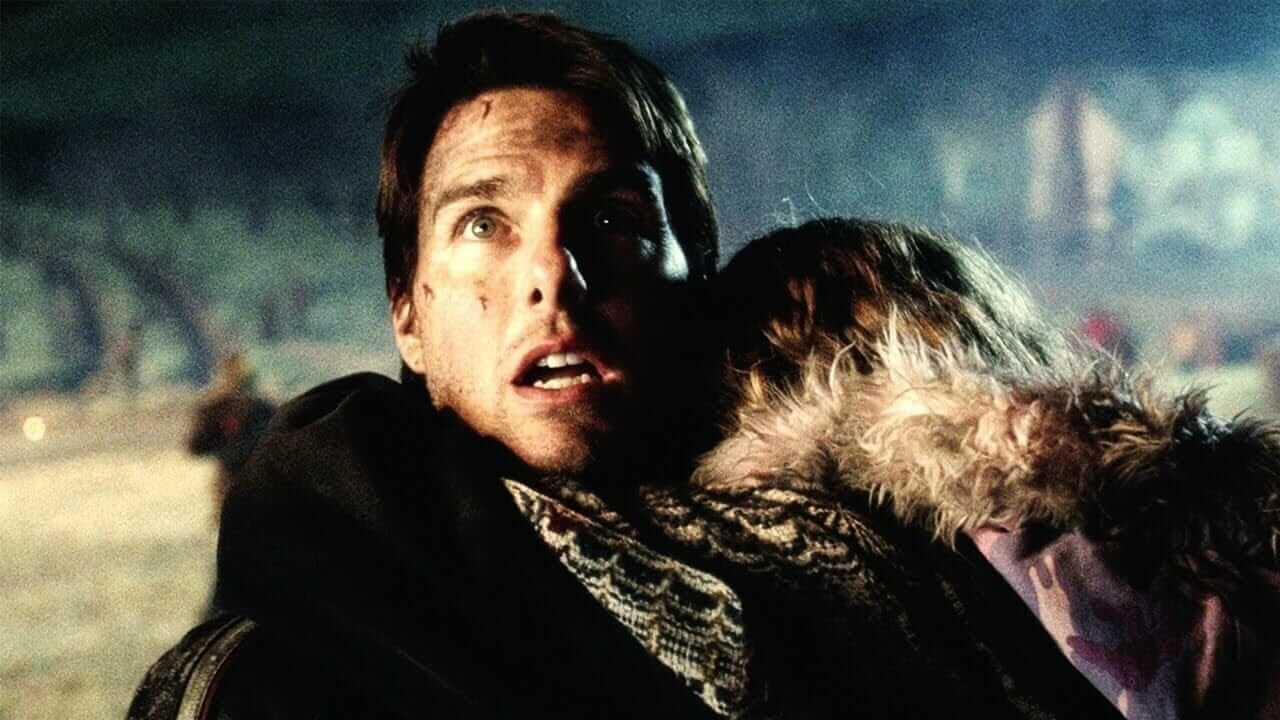 On that note, the emphasis on the fragility of human life and the ineffectiveness of human innovation and society at quelling the threat is another key theme of the film that retains its poignancy to this day. A particular scene showing a ferry boat toppled over after an alien tripod rises out of the water is still frightening today, especially as we watch people get picked out of the water at random and taken up to the aliens, with even more targeted with blasters as they run for safety on land. I found it interesting how the police and military forces are essentially extras in these scenes as well, proving their ineffectiveness at facing off against any non-human threat, underscoring the every-man-for-himself nature of the chaotic battleground, and, perhaps, making a broader point at the sometimes useless purpose these organizations serve in our everyday lives.

The effects in War of the Worlds are definitely very early 2000’s, with much of the larger set pieces showcased in dated CGI and the alien’s evil-yet-somehow-cute faces reminding somehow of Gremlins (1984). The best use of effects, I feel, is the inherent darkness in the use of red roots as if the aliens are using human blood to secure their newfound dominion over earth.

There is something horrifyingly timely about revisiting this film in 2020. Right now, the world is being ravaged by an inhuman threat and we have no way to stop it. While the COVID-19 pandemic certainly isn’t aliens with death-rays, it is a threat that should be uniting humanity; instead, we see how quickly rules break down and how selfish many people are. Re-watching War of the Worlds in 2020 feels very apt as it visualizes a lot of the internalized horror and emotional duress many people have been experiencing since the real-world outbreak.

At its core, War of the Worlds is a story about a family (albeit with incredibly high stakes). The ending comes down to a father fighting for his family against cruel, inhuman beings that have toppled every pre-existing marker of society- and somehow, remarkably, the family survives. The score, cinematography, direction, acting performances, and story keep this 2005 film feeling fresh and almost timeless. War of the Worlds is a film that can be revisited for years and years to come and will always maintain relevance.

“War of the Worlds is a film that can be revisited for years and years to come and will always maintain relevance.”

What did you think of Steven Speilberg’s adaptation of War of The Worlds? There are countless re-imaginings of H.G. Welles classic science-fiction novel, including Byron Haskin’s 1953 classic, Orson Welles infamous radio play, Jeff Wayne’s musical concept album of the same name, and countless television adaptations. Let us know all about your favourite iteration of the classic story over on Twitter, in the Nightmare on Film Street Subreddit, and on Facebook in the Horror Movie Fiend Club! 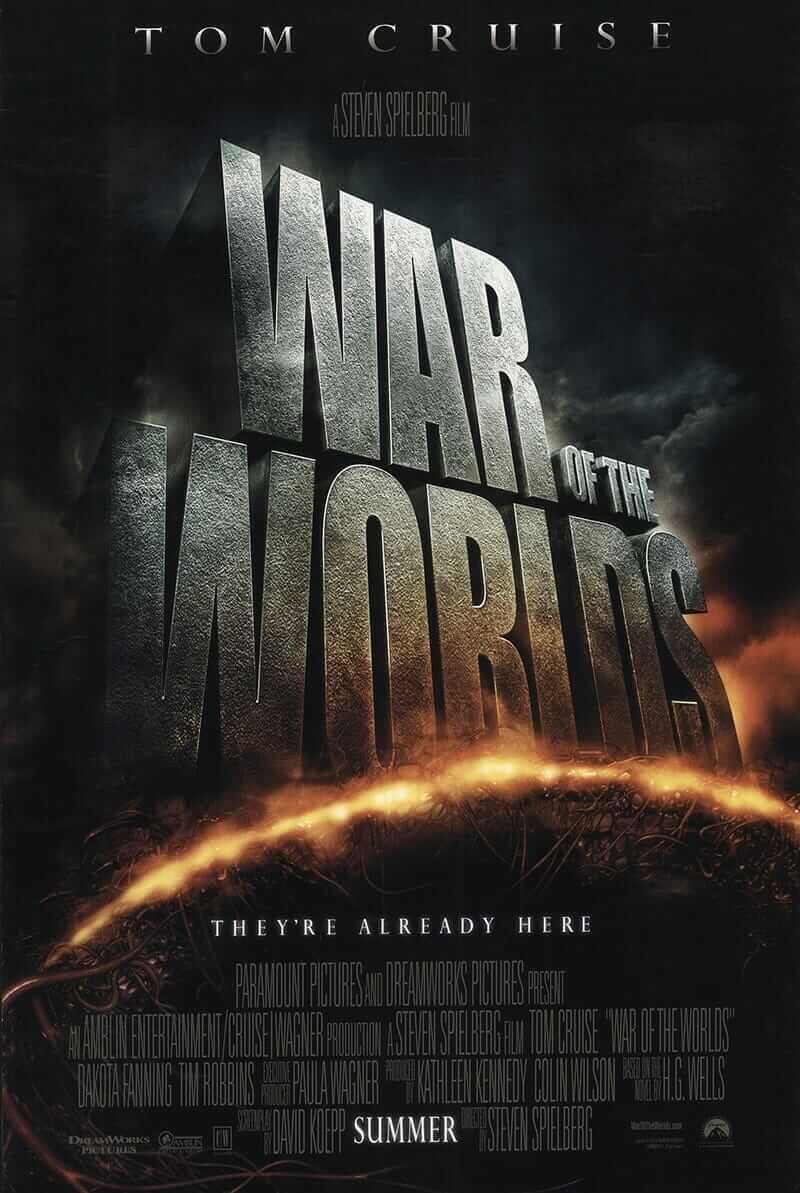