Break out the Van Buren china and hide the TV.

It’s easy to let your imaginations run wild when you try to picture an alien. Maybe you see the sleek, skeletal xenomorph Sigourney Weaver battled on the Nostromo. Or perhaps you picture E.T. hiding among stuffed animals. Now, if I asked you to picture a martian, I’d bet your visions narrow. No, in this month’s edition of Making a Monster, we will *not* be covering Matt Damon and his crop of poo-tatoes, though it could arguably fit the criteria. It’s SPACE month on Nightmare on Film Street, which allows me the opportunity to cover one of my absolute favorite cinematic creatures. We’re going back-ack-ACK-ACK! to 1996 to dissect the martians from Tim Burton’s Mars Attacks!

The design concept for the big-headed invaders from Mars came many years before we got to see Danny DeVito get vaporized in the Las Vegas Neon Boneyard. The story began in the year 1962. Trading card company Topps created a series of 55 cards depicting a martian invasion of Earth and the eventual human response. The series was called, you guessed it, Mars Attacks. Children of the time loved them, but their parents were less than pleased. The cards have become infamous throughout the years due to their controversial content at the time (it was the 60’s). Parents were horrified their kids were being subjected to images of gory images of humans being vaporized and martians kidnapping scantily-clad women. The backlash was so intense that after a brief attempt by Topps to tone down the imagery, the company pulled the series altogether. Naturally, as time progressed, the demand for the cards intensified, launching several re-releases and even cards continuing the story with even more intense graphic images. Do not fret, you can still purchase the original series on resale sites such as Ebay, if you have a cool $22,000 to spare. 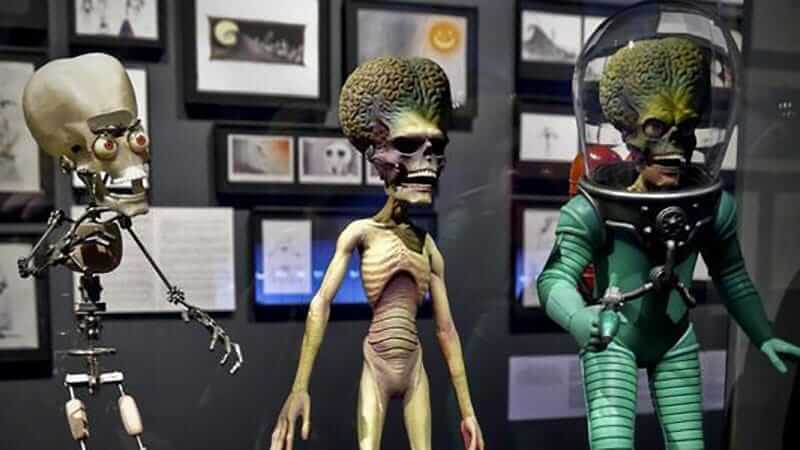 If you know much at all about Tim Burton’s style, you know that the director relishes the chance to work with stop-motion animation. Using the martian design from the Topps cards and a little refining, Burton enlisted a huge stop-motion dream team to begin crafting puppets of the little green invaders. The team, featuring head animator Barry Purves and over 70 additional personnel, spent 8 months on the project, before Warner Bros. pulled the rug out from under them. Nervous about a budget north of $100 million, the studio cut the budget down to $70 million, which spelled doom for the stop-motion process. Understanding that integrating stop motion into live action scenes would explode the now-thinner budget, Burton was convinced to switch to CGI animation after a very impressive test reel provided by Industrial Light and Magic. Note – While perhaps not a household name, ILM is responsible for most of your favorite cinematic adventures, including the CGI used in Jurassic Park, T2: Judgement Day, Casper, and 1999’s The Mummy.

The work on the puppets was not wasted, though, as the computer animators used the images of the puppets and the intricately-detailed set pieces in their work. In the end, Burton was pleased with the switch.

We had the opportunity to shoot in the wider, scope format, which had we done stop-motion would’ve been harder to do. We accomplished a lot more in a shorter period of time with this technique. It’s really down to the animators and how good they are, and I was lucky to work with good ones. 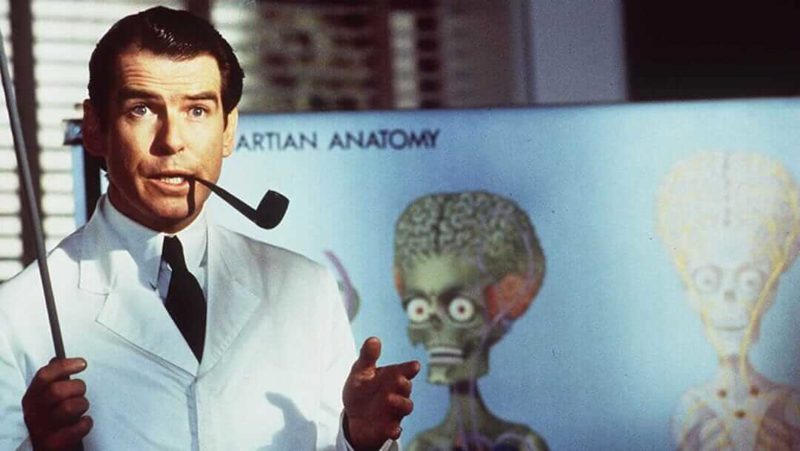 “All green of skin, 800 centuries ago. Their bodily fluids include the birth of half breeds. For the fundamental truth, self determination of the cosmos for dark is the suede that mows like a harvest.”

“What the hell does that mean?”

While the filmmakers behind Mars Attacks! followed the designs of the Topps trading cards closely, they took plenty of creative liberties in the process. This includes a fascinating explanation for their appearance. Despite their startling image, the martians do somewhat resemble human beings. They have human-like limbs, two eyes, a place where a nose should be, and one hell of a large brain (albeit exposed). In a scene where a scientist’s shoddy mechanical translator interprets a message from the martians, the aforementioned quote is spoken. While nonsense on the surface, it’s actually quite revealing. The martians claim humans were their cross-bred offspring. They claim domain over the cosmos, and will destroy the human race like a crop is harvested. Chilling, if they weren’t so darn hilarious. 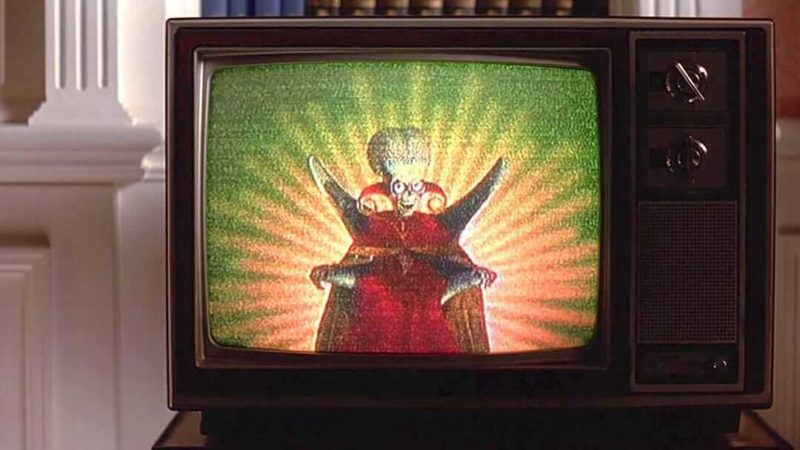 While the grotesque-yet-comical appearance of the martians holds a legendary status already, the character’s dialogue really is the true award winner. Everyone and their non-vaporized dog knows the classic “ack ack!” sounds the martians communicated by. But how, out of the endless possibilities creative minds could conjure up, did the filmmakers decide on that? The answer is, like many instances of Hollywood genius, it was an accident! During early production of Mars Attacks!, the storyboard writers hadn’t created any dialogue for the martians yet. In its place, the storyboards temporarily filled in their lines with “yak yak yak” to keep the motion of the scene flowing. Temporary, it was not. In an interview with the SyFy channel, Burton couldn’t help but chuckle when discussing the martian dialect.

With the voice, we tried a bunch of different things more complicated, but we ended up recording on a cheap recorder for the story boards, and it ended up sticking. It just seemed like their voice. We modified it a little bit, but it pretty much was a mistake.

Despite endless searching through interview after interview, that explanation is about as concrete as it gets. There are, however, some real whoppers out there claiming to know how the sound was created. One such example claims the sound was created by reversing a duck’s “quack”, which is far too convenient of explanation. In truth, it was legendary voice actor Frank Welker who provided the famed “ack ack!” An interesting tidbit from behind the scenes – Warner Bros. requested that Burton give the martians actual lines, which would be translated via subtitles, but the director refused. We can all agree Burton was correct, no?

Tim Burton captured my thoughts perfectly with this quote – “When I look at the characters, to me its like what I’d call a ‘classic man from Mars.’ It just seems like when you think of Invasion of the Saucer Men,  you think of the big-brained characters or the little guy. You push them all together and it creates this.” The aliens from Mars Attacks! are now the image that comes to mind when we think of “martians.” In our wonderful world of cinematic extraterrestrials, these martians belong alongside the likes of the xenomorph from the Alien franchise or The Predator alien in terms of cultural relevance. Their reach even extends into the music industry, and not because of their performance alongside Tom Jones. Country music artist Slim Whitman, who’s hit “Indian Love Call” vanquished the martians by literally exploding their heads, was never looked upon the same way after the film’s release. I challenge you to find an obituary for the late music star that doesn’t include a reference to his song’s inclusion in the film.

While Mars Attacks! didn’t find massive success at the box office, likely due to audiences suffering alien fatigue after the release of Independence Day earlier the same year, it’s certainly found its fans over the years. In an interesting tidbit of cinema history, 20th Century Fox actually rushed Independence Day to beat Mars Attacks! to theatres, fearing audiences would reject the more serious plot of their film in the wake of the humor-filled parody from their competition. In hindsight, it was likely a smart decision. I have little doubt Tim Burton’s classic would have vaporized it’s competition like President Dale’s dog.

Where do you rank the martians from Mars Attacks! among the other aliens of the big screen? Does your “end of the world” kit include a Slim Whitman CD? While you practice making the “international sign of the donut”, head on over to the Nightmare on Film Street Facebook group to continue the discussion! 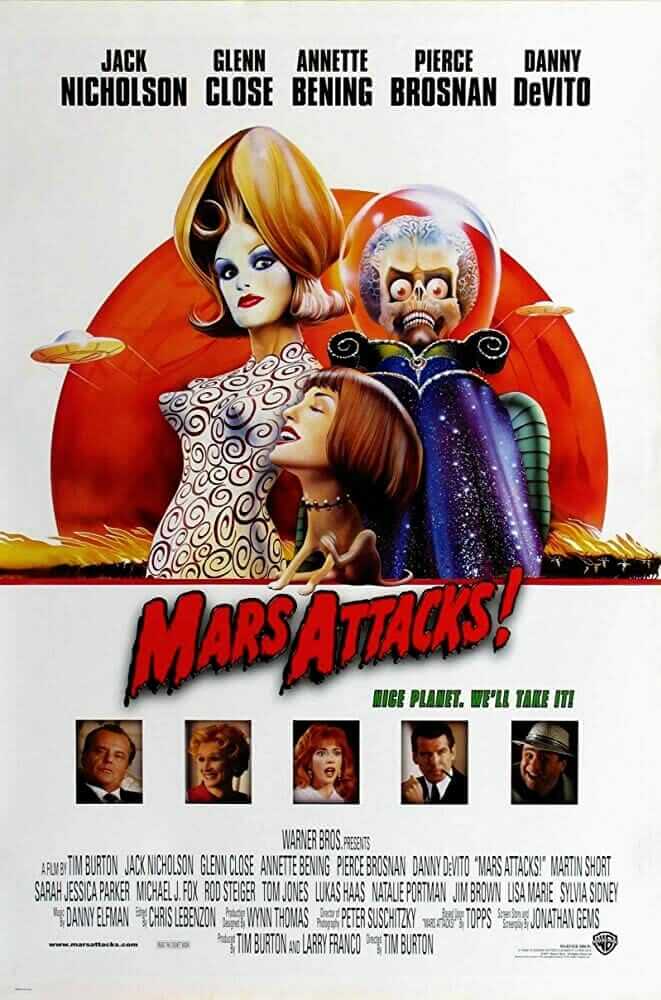