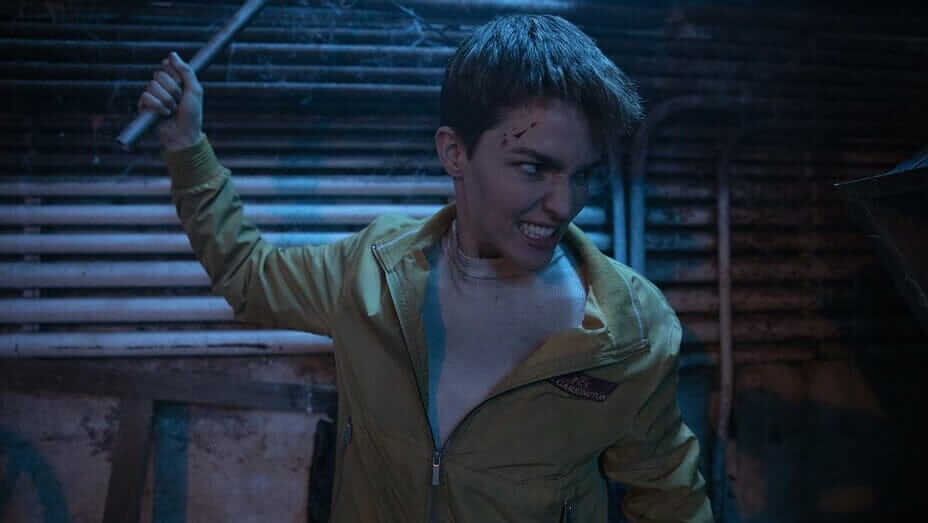 It feels like every studio movie nowadays wants to be Iron Man. That is, to be a big-budget venture into an established fandom that will, hopefully, lead to a cinematic universe full of more like itself. But it wasn’t always like this. There was a time when superhero fare was still an iffy IP to pull from, when special effects were less about CGI and more about pyrotechnics, when people weren’t as enamored with Tony Stark… but with John McClane. After Die Hard cemented itself as a surefire money-maker, studios were clamoring to put their own action star into a similarly simple scenario against a host of hatable goons and their snobby mastermind boss. Thirty years later, studios have pretty much stopped digging in that nearly-stripped goldmine. But that didn’t stop Ryûhei Kitamura’s The Doorman.

Ali Gorsky (Ruby Rose) is a highly-trained soldier returning to the US after losing a politician she was guarding to a terrorist attack. With no job prospects available, Ali turns to her Uncle Pat for some advice. Fortunately, Pat has a job for her as a doorman (“they said the title!”) at the hotel where he works maintenance, and where Ali‘s estranged brother-in-law and niece & nephew live. Ali takes the job and winds up getting an invitation to Easter Dinner from her newly-found family. Unfortunately, the building is also the home of a slippery black market art dealer, and his ex-partner, Victor Dubois (Jean Reno), has come to collect some pieces he believes to be his, by whatever force he deems necessary. When her family gets caught in the crossfire, Ali must use all her training to fend off Dubois’s squad of goons, protect her loved ones, and maybe save some priceless art along the way.

We’ll get back to Ali and Dubois in a moment, but first: one of the most impressive things this movie does is pack an absolutely staggering amount of 80s tropes into one hundred minutes. Ali‘s nephew is an angsty teen straight out of an anti-drug PSA. Her niece is an annoyingly optimistic, hero-worshipping kid who, at one point, refers to her older brother as “buttbrain.” And on the opposite team, Dubois‘s henchmen are as needlessly cruel and vaguely European as any bullet-fodder baddies have ever been. Hell, the henchmen even dress like an 80s bad guy army, with a short dyed mohawk and leather-on-Hawaiian-shirt combo especially standing out. Whether you feel this movie works as an 80s throwback or not, you can’t deny it doesn’t look and sound the part.

“[…] one of the most impressive things [The Doorman] does is pack an absolutely staggering amount of 80s tropes into one hundred minutes.”

Sadly, being 80s action movie tropes are about as much development as these characters get. That said, watching Jean Reno as a stereotypical French criminal mastermind is fun. He’s not afraid to ham it up a little bit, at one point literally swirling a wine glass under his nose as he maniacally monologues about art. Basically, he’s a very easy villain, which makes it a shame that Ruby Rose, who is usually a phenomenal actor, doesn’t match his campiness. That’s not necessarily her fault though; the story gives her so little to do besides punch people that it would be difficult to pull even a corny character out of it. On that note though, it was very cool to learn that Rose did all her own stunts for this movie. So even though the script didn’t give her much, she did something with it to make it her own.

However, that fact also makes it extra disappointing that the most lackluster element to the movie is its action. That’s mostly due to very choppy editing. It’s a problem throughout the whole movie, but especially in the fight scenes. This makes the fights hard to follow, and their conclusions pretty unsatisfying. The framing of these scenes also lets the viewer down; there are two instances of a bad guy meeting an effects-heavy end that’s at least partially obscured. For a film by the man who gave us The Midnight Meat Train, The Doorman is seriously lacking in showy deaths. A lot of the would-be Die Hards of the 80s and 90s suffered from being just that. The comparisons that studios hoped ticket-buyers would make between the two also ended up being the comparisons critics ended up making. And by being so close to the Die Hard formula, it was easy to tell how those movies failed where Die Hard succeeded. Unfortunately, the same is true of The Doorman. If you check it out, you’ll no doubt be able to see how it takes its cues from classic 80s action movies. At the same time, you’ll probably just wish you were watching one of those instead.

The Doorman is out on VOD now. If you watch it, we want to know what you think! Did it scratch the same itch that 80s action movies do for you? How does it compare to Ryûhei Kitamura’s other movies? Will “henchman chic” ever become its own brand of fashion? Let us know on Facebook, Twitter, or Instagram. And for more movie reviews like this one, keep lurking at Nightmare on Film Street. Summary You'll no doubt be able to see how THE DOORMAN takes its cues from classic 80s action movies. At the same time, you'll probably just wish you were watching one of those instead.