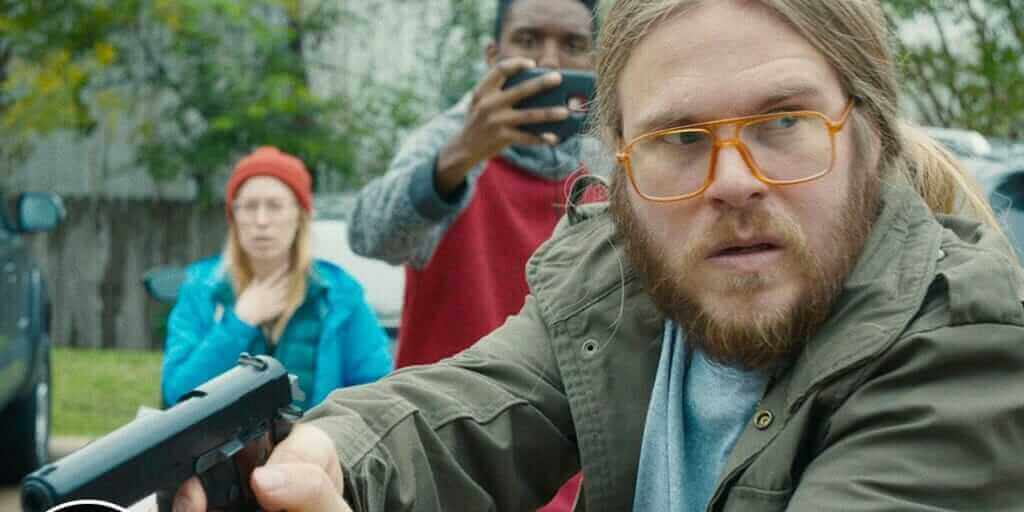 Remember when conspiracy theories used to be fun? Remember when throwing out baseless claims about Bigfoot, UFOs or the fake moon landing didn’t harm anyone? Remember when nobody took Infowars or Coast to Coast AM seriously? Well, we’re living in a very different world right now where a large portion of Americans believe that there are microchips in vaccines and a secret cabal of sex traffickers is cannibalizing babies. Duncan is a dark satire of the current climate, inspired by the debunked conspiracy theory Pizzagate. It was directed by John Valley, who also wrote the script, edited the footage, composed the score, supervised the costume department, and starred as the antagonist.

For those not familiar with the story of Pizzagate, amid the 2016 Election, emails from Hillary Clinton’s campaign manager John Podesta were hacked and posted on Wikileaks. Among the emails were correspondences between Podesta and the owner of a pizza shop in DC about organizing a fundraiser. But tinfoil-hat users on 4Chan interpreted the benign emails as coded messages, concluding that the Democratic Party were trafficking children out of the basement of the pizzeria. This led to one man storming the pizzeria with an assault rifle in order to “investigate” these claims, only to find out there was no basement. This is only one example of how fake news can lead to violence.

“….a dark satire of the current climate…”

Karen Black (Alexandria Payne) is a young journalist who is fired on her first day on the set of Terri Lee Live, a right-wing “news” show broadcasted out of Waco, Texas. Before Karen’s mishap ruined the transmission, host Terri Lee (Lee Eddy, I Don’t Feel At Home in This World Anymore) went live with rumors about an alleged child sex ring run by reptilians out of a pizzeria down in Austin. In the parking lot of the TV studio, Karen witnesses Terri’s most loyal fan Duncan Plump (Tinus Seaux) pulls a gun on liberals protesting Terri’s hateful rhetoric. Determined to travel to the pizzeria herself and film whatever she finds there, Karen hires Duncan for protection, on the off chance there really are lizard people drinking the blood of children in the basement of the establishment.

Things go south real fast, even before they reach the pizzeria. The situation becomes worse and worse for Duncan, and by the end, everything turns pitch black and blood red. Standoffs escalate quickly and whoever steps in Duncan‘s path is executed in a brutal fashion. John Valley drums up some tense moments with long pauses and an anxious electronic score. When absurdity crept into those moments, I didn’t know whether to laugh or recoil in terror.

“…I didn’t know whether to laugh or recoil in terror.”

During their little road trip, Karen and Duncan form an unusual bond, though their views tend to clash, like when Karen notices the confederate flag license plate on Duncan’s van. Still, when confronted with the foul racism of random strangers in rural Texas, Duncan is quick to call Karen his friend. Years of consuming conspiracy theories has made Duncan unhinged and he frequently struggles with his anger issues. However, there are hints that suggest Duncan is trying to make up for his troubling past, as if he’s trying to walk back from jumping off the deep end years prior. Because of his questionable ideas, you’re constantly kept on the fence about whether or not you should root for him, though he has his scenes of triumph, where he is given the appearance of a justified vigilante, like Charles Bronson in Death Wish, especially in shots of him pointing his gun directly at the camera.

Tinus Seaux gives an outstanding performance as Duncan, having only previously acted in one or two minor roles. Up until now, Seaux has been working behind the scenes as a grip on film sets and as a stagehand for live events in Austin. Judging from his IMDb, it appears he made an impression on the producer Aaron B. Koontz, working as a crew member on the set of The Pale Door, enough to be cast in the titular role. If this doesn’t kickstart his acting career, then nothing will. Contrary to what the title suggests, Karen is actually our main protagonist, yet Alexandria Payne plays her in a way that makes her come off as an observer dropped into a world gone mad. It’s also worth mentioning John Valley’s performance as Phil, Duncan’s trigger-happy rival who has his sights set on leading the secret militia Duncan is part of.

“…Duncan will remain frighteningly relevant for years to come.”

A lot of the exposition is provided sporadically by Karen through an interview done in the aftermath of their trip to the pizzeria. However, there is still a lot that is left unexplained. We aren’t given the full story, we’re only shown all the events that place over the course of those 48 hours. The end comes abruptly and a huge bombshell is dropped on your lap, with not enough time to process by the time the credits roll. In the end, nobody comes out looking good.

Surprisingly, there’s no mention of You Know Who, even though many of the characters in Duncan are clearly part of his base. Rather, the finger is pointed at the media, both on the left and on the right, for fanning the flames of fear and sowing the seeds of division. The battle between reality and fake news continues to rage to this day, and it doesn’t appear to be dying down anytime soon. And that’s why Duncan will remain frighteningly relevant for years to come.

Duncan celebrated its Regional Premiere at Panic Fest 2021. Click HERE to follow our full coverage of the festival and be sure to let us know if Duncan disturbed you over on Twitter, Reddit, Facebook, and in the official Nightmare on Film Street Discord. Not a social media fan? Get more horror delivered straight to your inbox by joining the Neighbourhood Watch Newsletter.

TLDR Surprisingly, there’s no mention of You Know Who, even though many of the characters in DUNCAN are clearly part of his base. Rather, the finger is pointed at the media, both on the left and on the right, for fanning the flames of fear and sowing the seeds of division. The battle between reality and fake news continues to rage to this day, and it doesn’t appear to be dying down anytime soon. And that’s why Duncan will remain frighteningly relevant for years to come.