If there’s a genre that’s hip with the times, it’s definitely horror. Killing kids on Facebook before your grandma even signed up, Horror’s been taking tech to task since the Y2k. And now, with people everywhere renting out the lumpy futon in the cat’s bedroom on AirBNB, it’s no surprise short-stay rental horrors are on the rise.

Brandon Christensen, who terrorized with previous Shudder-bound frights Still/Born (2017) and Z (2019), returns with Superhost; a killer chiller that puts letting-your-guard-down-in-the-home-of-a-stranger-you-barely-met-off-the-internet to task.

Superhost follows trendy couple Claire (Sara Canning, Z) and Teddy (Osric Chau, Supernatural series) who take a calm, romantic getaway at a homeshare in the woods. The end. (jk.) Claire and Teddy are ‘professional’ travel YouTubers who’ve set their sights on the modern-yet-isolated vacation home of BettyLou52 for their next video series. Upon arriving, the pair are met by the eccentric but sweet Rebecca (Gracie Gillam, Z Nation Series), who grabs their bags and gets them set up. A little overeager for a positive review, Rebecca doesn’t give the best first impression, but Claire and Teddy don’t think too much of it ..yet.

Things slowly escalate from inconvenience to outright weird after Rebecca’s behavior gets more and more erratic. There are peculiarities about the house as well; a toilet that won’t unclog, cameras in every room, a finicky door alarm.. it isn’t long before Claire and Teddy become squicked out by their new digs.

But Claire is hungry for views and subscribers, so even though they have their reservations about her, the content that kooky old Rebecca would provide would be too good to pass up. This exploitative behavior seems to be a habit of Claire’s. We learn this when past ‘Superhost’ and feature of one of their video series Vera (Barbara Crampton, Jakob’s Wife) shows up to raise hell after the pair’s videos cost her her livelihood.

It isn’t long before a tornado of troubles surrounds the duo, as the hunt for fresh hot content turns deadly.

“Superhost is timely and fresh, keeping hip to the jive of an ever-evolving app-driven culture.”

Superhost is timely and fresh, keeping hip to the jive of an ever-evolving app-driven culture. On top of homestays being an under-tapped resource for frights aplenty, the film keeps with the modern vibe by having its lead protagonists as Youtubers. The videos the pair film are fresh and zippy, which keeps the momentum of the film high as we cut back and forth between the highly edited, clickbaity world of youtube-reality and reality-reality. Their tendency to film everything also gives us some fun stylistic moments where the film almost becomes found footage, going right into the POV of our characters. It’s an instant tension builder, and the juggling of formats is clean and seamless.

Superhost’s biggest strength is its powerhouse weirdo Rebecca, played chillingly by Gracie Gillam. Rebecca starts as an off-kilter Lunette the Clown (Big Comfy Couch fans will get it), but her dead stare and never-ending grin soon snowball their way towards Mark Duplass in Creep levels of unsettling. Rebecca is an absolute terror, and she doesn’t have to do much.  In a performance that rivals Robin McLeavy as Princess in the Loved Ones, Rebecca may just go down as one of horror’s new greatest female villains. She’s a Superhost! And believe me, she works hard for her five-star rating, and even harder for no rating at all.

Superhost only faults in its tumble towards a conclusion. It’s no doubt things are building toward chaos, but the story seems to take a backseat once Rebecca takes control. Though I don’t really need to understand her plan to be fully on board with anything she does, the story junky in me wants more finesse in the finale. Expectations are built high early on through the film’s polish, well-written characters, and strong performances, but the plot plays out a little bit like discovering your rental has spotty wi-fi and only one spoon in the dish drawer. It looks great in the listing, the grams are good, but you gotta fight your husband if you want to get your coffee stirred.

Though Superhost may falter in the finale, it’s still a killer time and crafts one of the greatest female villains of all time. No joke. That laugh. That stare. I cringed. I screamed. I loved.

“…Rebecca may just go down as one of horror’s new greatest female villains.”

Superhost premiered at Popcorn Frights 2021, which runs from August 12-19 and hits Shudder on September 2. Check out all of our reviews from the Fest here! Let us know if you’re excited for Superhost and tell us ALL of your getaway horror stories in our Discord Channel! 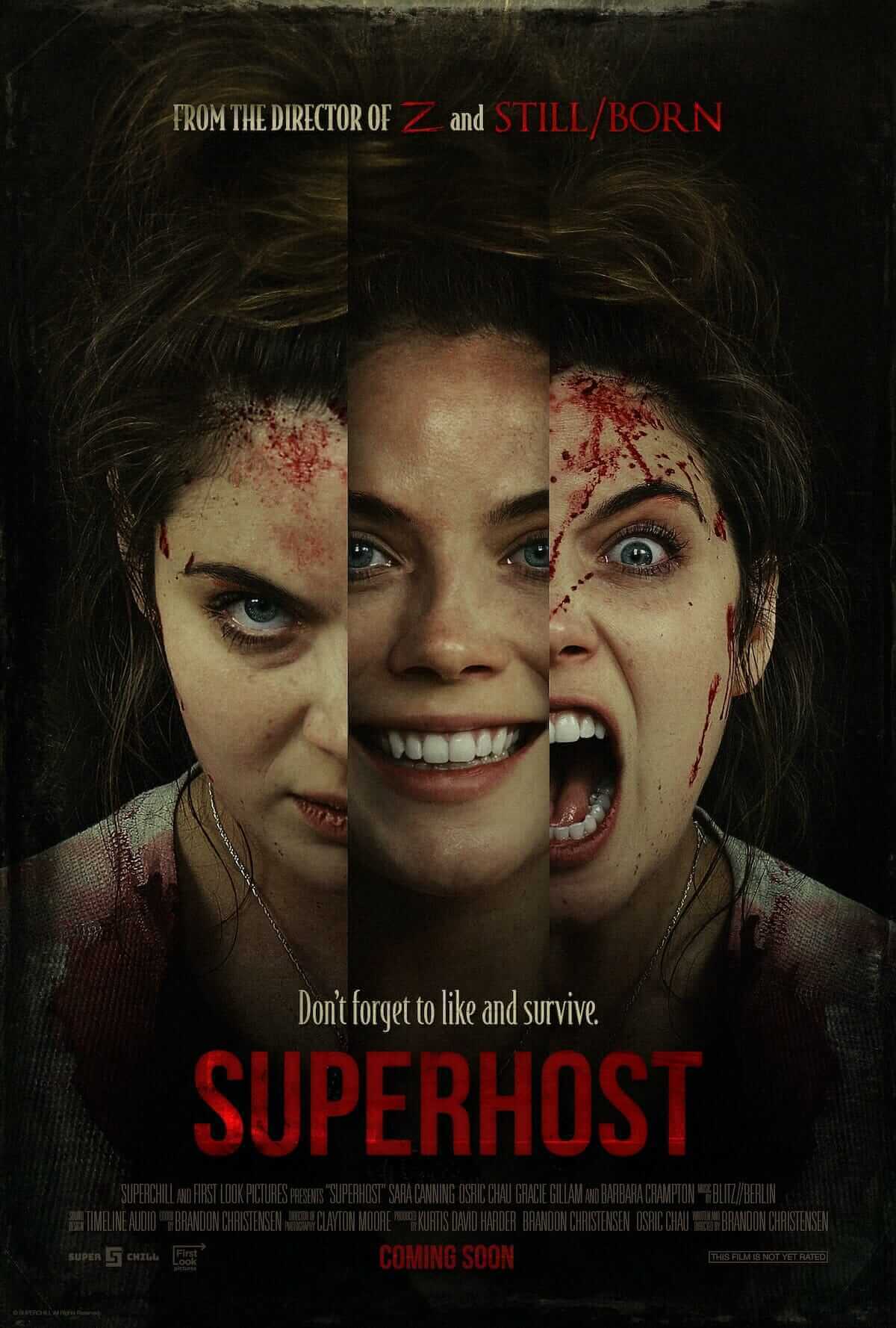 TLDR Superhost is timely and fresh, keeping hip to the jive of an ever-evolving app-driven culture.