Folk Horror, as a genre, is not a constant in the horror movie landscape. It comes and goes as needed, bubbling back to the surface as tensions about environmental destruction and climate change reemerge as the main players in our collective, societal worry. While Scott Cooper’s Antlers shys away from putting too much focus on those classic Folk Horror themes, it does deliver a chilling Wendigo story with first-rate practical effects and a grim tale of American life.

Set deep in the foothills of Oregon’s mountain range, Antlers unfolds in a town where there are as many methadone clinics as there are grocery stores. It’s a town built by a mining industry that sucked the land dry of every natural resource before abandoning the area and crippling an entire community of people just trying to make a living. The modern machinery of corporate greed and capitalistic gluttony has an insatiable appetite, a perfect soil bed for this Wendigo story to take root.

The Wendigo, as explained in the film by legendary character actor Graham Greene (Tar), is a malevolent native spirit that attached itself to a hunter who resorted to cannibalism for survival. According to legend, the Wendigo has a ravenous hunger that can not be controlled. Its preferred meal? Raw human flesh.

Antlers stars Keri Russell (The Americans) and Jesse Plemons (El Camino) as brother and sister Julia and Paul Meadows. Paul is the sheriff of the town, tasked with evicting poor families from their homes, arresting (and re-arresting) meth addicts, and hunting down forest monsters that tear people to shreds. Julia, an elementary school teacher, has only recently returned to their childhood town after years of hiding in California from a lifetime of bad memories. When Julia notices some distressing signs of abuse and neglect in her student Lucas (Jeremy T. Thomas) the two begin an investigation into the troubled home life of this poor boy but nothing could prepare them for the horrors Lucas has been hiding behind closed doors.

Gloom and doom have been ever-present in horror these last few years and you’ll find no shortage of either in Antlers. That aesthetic can really wear you down if you’re not prepared to accept it but if we can’t be pessimistic about the destruction of our world, what can we be pessimistic about? To that end, Antlers is a slow funeral march for every tortured soul caught up in the destruction of America’s industrial obsessions. There is no room for levity in what could otherwise be a fun, funky creature feature about an ancient spirit come to teach us young whipper-snappers a thing or two about taking care of a world we take for granted.

Normally, a movie as depressive as Antlers can be a chore but there’s something to be said about seeing such an honest depiction of modern woe. If you simply swapped out the Wendigo monster for a drug-addict turned murderer you’d have a tragedy torn from the headlines of today’s newspapers. Drugs have hollowed out people the same way we’ve hollowed out the earth and director of photography Florian Hoffmeister (The Terror) captures that despondent sense of doom with crushing accuracy. 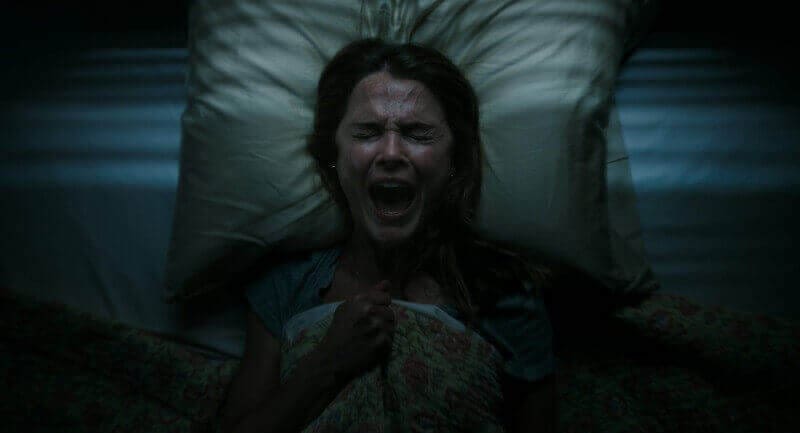 A “Fields Grocery” store sits where valley grass once swayed in the wind. Red & white police flashers act as night lights for a sad town that never finds rest. Cinematography is what you point your camera at, and Hoffmeister & Cooper very clearly made sure to point that sucker anywhere hope couldn’t be found. But that isn’t to say that Antlers isn’t an enjoyable watch, it’s just subject matter that requires you to take it as deadly serious as humanly possible. If that means your soul dies a little bit at the thought of such a joyless existence then so be it. For a lot of people today, this is just what life looks like. Wendigo warts and all.

Horror fans will be happy to know that Antlers also features some top-notch practical effects and some of the gnarliest corpses since Matt Hooper was called into Amity Island to investigate a boating accident. Townsfolk are mangled and mutilated beyond recognition and that body destruction is on full, glorious display. Corpses are discovered in visceral messes that make them look more like leftover takeout food than human beings. It’s definitely not a movie for the squeamish but anyone interested in the dark arts of practical effects prosthetic make-up will find themselves drooling over Antler‘s monster and its merciless mayhem.

Anters, a Searchlight picture, is playing in theatres now! This dour creature feature is directed by Scott Cooper (Black Mass), and produced by Guillermo del Toro (Crimson Peak) from a screenplay by Henry Chaisson & Nick Antosca, and Scott Cooper. Be sure to let us know that you thought of this Wendigo Folk Horror over on Twitter, Reddit, Facebook, and in the official Nightmare on Film Street Discord. Not a social media fan? Get more horror delivered straight to your inbox by joining the Neighbourhood Watch Newsletter. TLDR Antlers is definitely not a movie for the squeamish but anyone interested in the dark arts of practical effects prosthetic make-up will find themselves drooling over Antler's monster and its merciless mayhem.