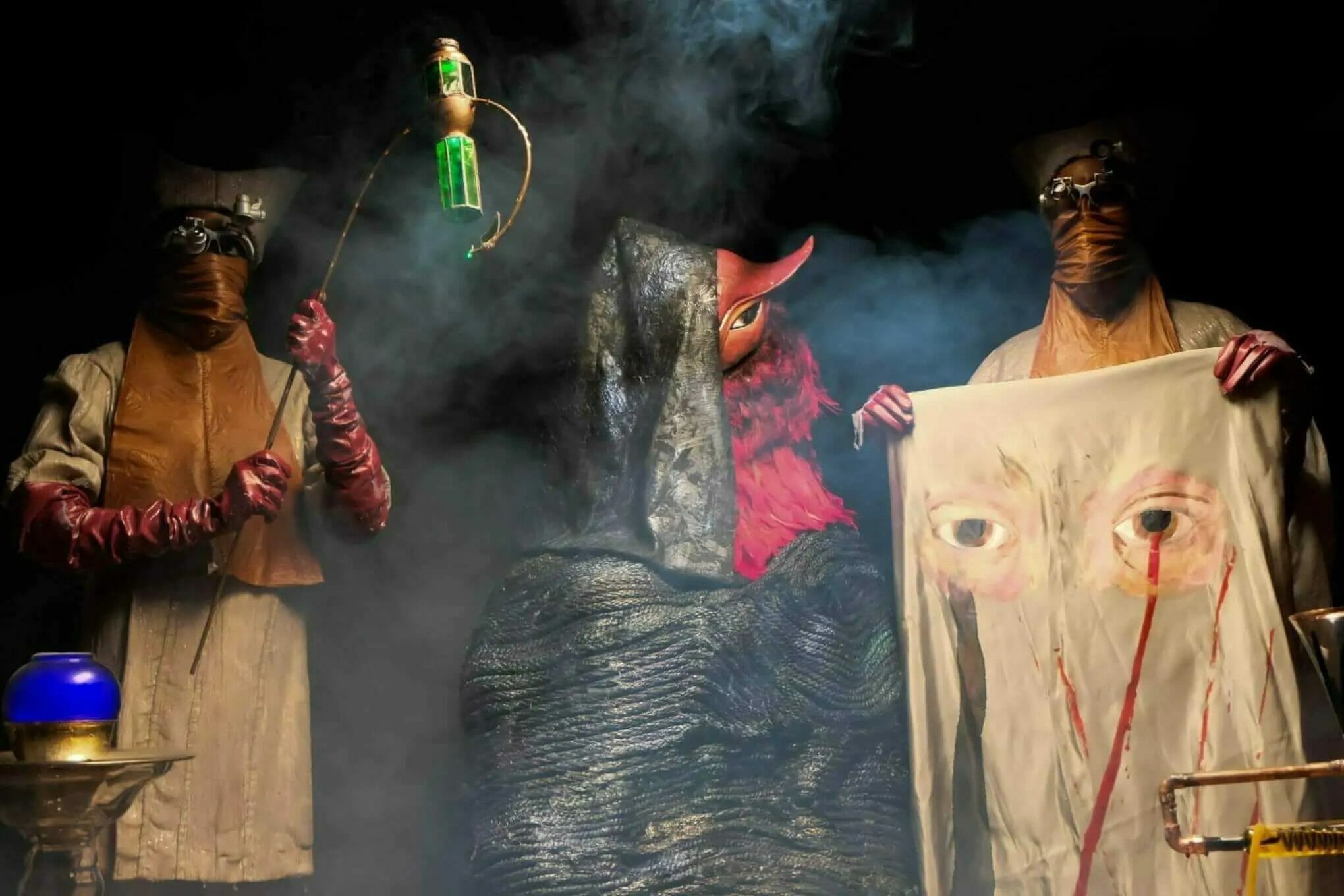 Indie horror filmmaker Travis Stevens (Jakob’s Wife) returns with his latest feature A Wounded Fawn, hitting Shudder Dec 1. Shot entirely on 16mm, and boasting the heavy film grain of a movie lovingly restored by a boutique label, A Wounded Fawn is a hallucinatory trip into the mind of a serial killer with the haunting atmosphere of a 70s psychological thriller.

Co-written by Stevens and Nathan Faudree, A Wounded Fawn stars Josh Ruben (Blood Relatives), Sarah Lind (The Exorcism of Molly Hartley), Malin Barr (The Beta Test), Katie Kuang (Westworld), and a whole bunch of ethereal creatures like the mysterious figures featured in the image above. I’ve been staring at the exact photo for months now trying to make heads or tails of what this movie could be about. And although it doesn’t quite give much away, it’s a great primer for how this seemingly simple cat-and-mouse story evolves into something truly bizarre.

Fellow filmmaker Josh Ruben, who wrote himself as the physical embodiment of Toxic Masculinity in his 2020 debut feature Scare Me, once again portrays a surprisingly dangerous host whose smile is as untrustworthy as an unsupervised drink. In A Wounded Fawn, Ruben’s character Bruce has invited Lind’s Meredith to his secluded cottage for a romantic weekend away from the hustle and bustle of the city. Totally casual. Super normal. Definitely not the go-to move for a multiple murderer or anything.

After a handful of subtly alarming happenings, Meredith begins to think that she should have listened to the voice that whispered Leave! the moment she set eyes on the cottage. Of course, Bruce has no plans to let Meredith out of his grasp. Things have been looking pretty grim for Meredith until now but in a fight for her life, she manages to leave Bruce with a nasty head injury that sends him spiraling down a hallucinatory journey through the dark recesses of his twisted mind.

Travis Stevens, as a filmmaker, has never been afraid to get weird and if you’re looking for a movie to tingle your weird-bone, A Wounded Fawn is the high-strangeness you’ve been looking for in 2022. On the surface, it’s a familiar “2nd date goes from romantic to nightmarish” story but lurking in the shadows is a late-night midnight madness flick waiting for an opportunity to reveal itself. With two feet firmly planted in the art-house and thriller camps, A Wounded Fawn builds tension but also lets off steam by way of hypnotic nightmare imagery.

It’s absolutely not a movie for everyone (it even lost me in a few moments) but there’s no denying Stevens’ and cinematographer Ksusha Genenfeld’s ability to capture striking images of dreamlike terror. On the other hand, it’s also got fun & freaky moments if trippy hallucinations aren’t your bag. Like when Josh Ruben’s character gets into a fistfight with a fireplace exhaust pipe that has transformed into a snake all while the ghost of one his victims laughs and rides the fireplace like a bucking, burning broncho.


The film shifts gears hard from Act to Act and some might argue that there isn’t much story to the film. That isn’t exactly an unfair criticism, but it is a creepy mood piece for anyone looking to fall down the rabbit hole of a lunatic chasing the ghost of his own sadistic compulsions. Fans of Kuroneko and Let’s Scare Jessica To Death will especially appreciate the atmosphere and imagery of A Wounded Fawn. I might just be talking out of my ass on that one but, either way, those were the movies I was reminded of during some of my favorite scenes.

It’s brilliantly shot and features a great performance from Sarah Lind as a woman who doesn’t realize just how much danger she’s in until it’s almost too late. Survival stories are an easy sell, especially for the horror crowd, but it’s always nice to know there are still filmmakers out there looking to make a tried-and-true template as engaging and as weird as possible.

Travis Steven’s A Wounded Fawn premieres on Shudder December 1st. Be sure to let us know what you thought of this Psycho-Delic serial killer story over on Twitter or in the Nightmare on Film Street Discord! Not a social media fan? Get more horror delivered straight to your inbox by joining the Neighbourhood Watch Newsletter.

Review: A WOUNDED FAWN (2022)
TLDR
A Wounded Fawn is the high-strangeness you've been looking for in 2022. On the surface, it's a familiar "2nd date goes from romantic to nightmarish" story but lurking in the shadows is a late-night midnight madness flick waiting for an opportunity to reveal itself. With two feet firmly planted in the art-house and thriller camps, A Wounded Fawn builds tension but also lets off steam by way of hypnotic nightmare imagery.
Cinematography
90
Imagery
85
Story
60
Performances
75
77