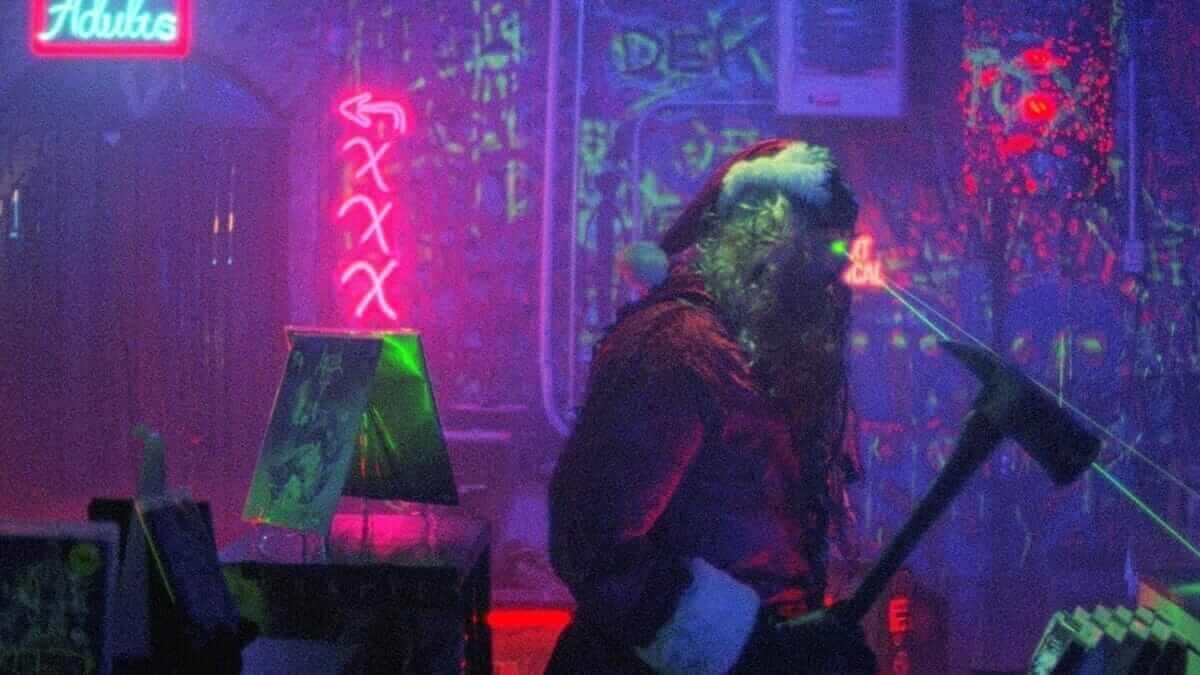 Christmas is often a time devoted to emotional extremes, as its colorful lights, songs, and the spirit of the holiday can elicit both joy & adulation or horror & trepidation. As Christmas Bloody Christmas unfolds into its Santa-led murderous mayhem with reckless abandon, its unruly pace and blood-soaked set pieces may leave you cautious about which end of that spectrum to fall on.

This newest perversion of Jolly ‘Ole Saint Nick comes from the mind of Joe Begos (Bliss), who writes and directs this rebellious tale of a Terminator-Esque Santa terrorizing a small town on Christmas Eve. Riley Dandy (That’s Amor) carries the movie as Christmas heretic Tori, who wants nothing more than to get drunk and get laid while others anxiously await the traditions of Christmas morning. Joining her on that expedition is her employee Robbie, played by Sam Delich (Spiderhead), who plays along with Tori’s controversial quips and high tolerance for alcohol in hopes of landing in her pants.

“…there is no absence of savagery in this inverted Christmas tale.”

After making their way from the record store at which they work, through the local bar and back to Tori’s place for a nightcap, their ongoing debates about Christmas music and rock ’n roll are put on a proverbial hold as they encounter a murderous robotic Santa. Originally developed for military use, this repurposed weapon becomes corrupted and begins wielding an axe to deliver its own brand of Christmas gore. As Tori’s apprehensions about the holiday are made violently real, she is left to make one last stand against this seemingly indestructible threat.

Visually resonating as an amalgamation of Kristen Stewart and Jodie Comer, Dandy delivers a stand-out performance that captures both the down-to-earth attractiveness and gritty determination of the aforementioned actresses, respectively. She delivers her lines with complete conviction (and there are a lot of them) and builds quite the believable chemistry with Delich’s Robbie in the “will they/won’t they” subplot.

The entire first act of the movie rests on the laurels of these performances, as the movie establishes a slow-build toward its inevitable carnage. Driven partly by script and partly by improv, Tori and Robbie playfully share quips and build on the alternative themes of this story by establishing a core focus of sex, drugs, and rock ’n roll. Their back and forth is hard-hitting and moves quickly, with little time to breathe before the movie rolls into its next act. It is overwhelming at times and leans on the border of absurdity, but there is a good deal of entertainment in the rawness of these exchanges.

When the movie eventually rolls into its second half and establishes the presence and ability of its Santa T-1000 (Abraham Benrubi), the story’s awkward pacing becomes quite pronounced. Whether a culprit of too much dialogue or the lack of writing a true second act, the story feels carelessly thrown at your face with sensory overload and little time to ever actually process the experience. In that chaos, however, comes the technical elements that capture the movie’s appeal. 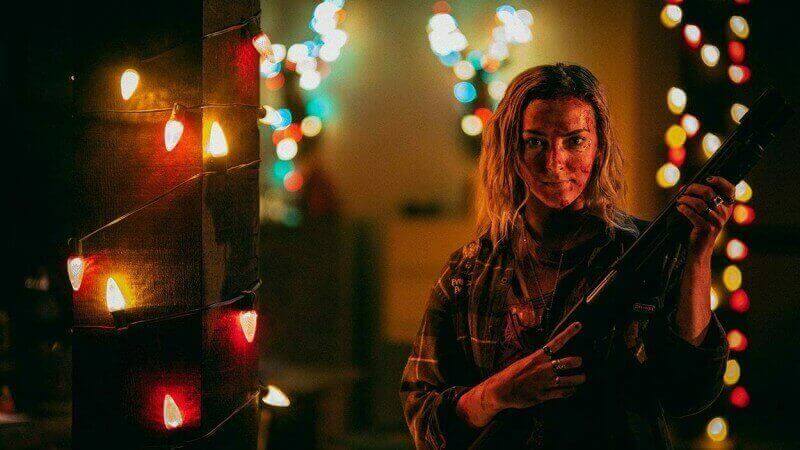 Santa’s brutality is paired with a slew of practical effects that are a refreshing sight, leaning into the cheesiness of its own setup. BEgos’ devotion to the simple, yet comic, insanity of his narrative is one to be admired, even if it struggles in pacing and in establishing a core foundation for investing in each subsequent happening. This is offset, though, with the absence of getting bogged down in backstory or feeling the need to highlight obvious holiday themes.


Along with a lack of backstory comes a generic antagonist in the form of the robotic Santa. His blood-soaked beard and unruly strength gifts the audience with eye-popping action sets of inhuman strength and complete disregard for the unrestrained damage to the human body. It is here, with every skull smash and relentless beheading, that the movie finds its true holiday joy. However exciting as those aspects are though, the Santa robot inevitably feels limited in what it can do and the final act.

Pitting this unstoppable killer robot against Tori becomes overwhelmingly repetitive with multiple false endings. Playing into its slasher tropes is noble, with the invincible villain, Tori’s loss of common sense, and the complete uselessness of the police, led by the familiar face of Jeff Daniel Phillips (The Munsters) as Sheriff Monroe, but there was something missing in the approach to this story that leaves a greater appeal on the table.

Encapsulated with satirical themes and a lewd holiday love story, there is no absence of savagery in this inverted Christmas tale. While there is plenty of violence by which to find exhilaration, Christmas Bloody Christmas as a whole does not feel especially memorable. It is a feat in practical effects and character work, particularly by lead Riley Dandy, but there were elements missing amidst the loud music and hazy camera work that her charm could not elevate. Come for the brutality and stay for the badass final girl, but this movie may not become an instant holiday rewatch for many.

Joe Begos’ off-the-wall Holiday Horror Christmas Bloody Christmas is playing in select theatres right now, and is also available to stream on Shudder. Let us know what you thought of this practical-effects-driven killer Santa flick over on Twitter, Reddit, Facebook, and in the official Nightmare on Film Street Discord. Heck, follow Nightmare on Film Street on TikTok for more horror movie recommendations while you’re at it. 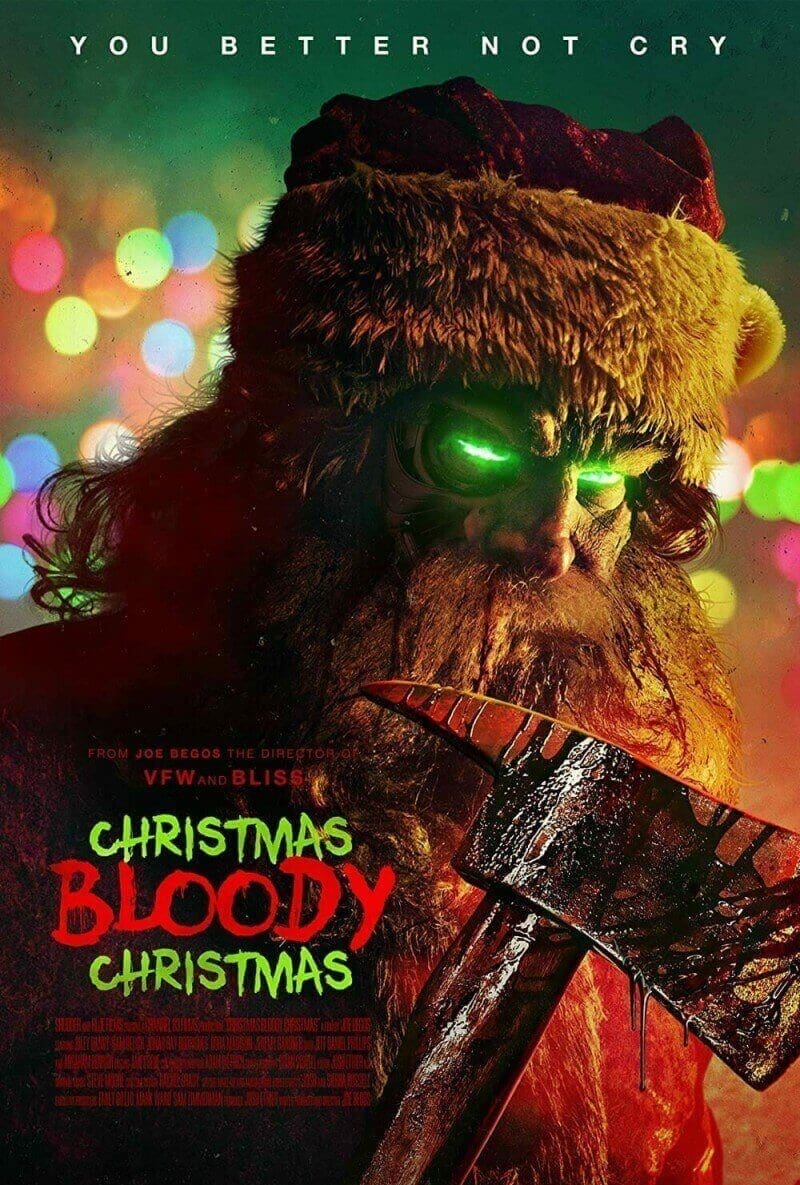 Review: CHRISTMAS BLOODY CHRISTMAS (2022)
TLDR
While there is plenty of violence by which to find exhilaration, Christmas Bloody Christmas as a whole does not feel especially memorable. It is a feat in practical effects and character work, particularly by lead Riley Dandy, but there were elements missing amidst the loud music and hazy camera work that her charm could not elevate. Come for the brutality and stay for the badass final girl, but this movie may not become an instant holiday rewatch for many.
Practical Effects
90
Narrative Pacing
50
Character Performance
75
Killer Santa
60
68