[Review] DARLIN’ is an Imperfect But Emotional Feminist Folktale 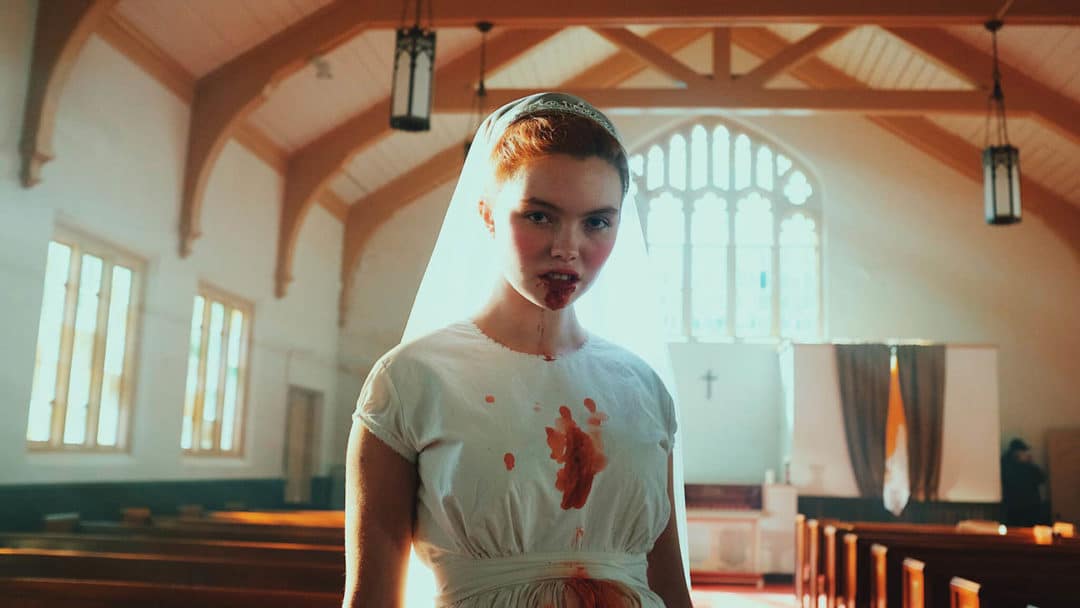 Darlin’ is a strange sort of horror film. Its events are not particularly suspenseful, and there is nary a jump scare in sight. Yet the film, from director Pollyanna McIntosh, is frightening nonetheless. Its horror lies in the disturbing reality of the misogynistic world it portrays and the suffering that patriarchal systems inflict upon its characters. It is a powerful feminist folktale, but it’s thematic ambitions often overtake the plot. Despite this, affecting performances, especially that of the film’s young lead, makes it well worth seeing.

Darlin’ is a sequel to 2011’s The Woman (dir. Lucky McKee), itself a sequel to 2009’s Offspring (dir. Andrew van den Houten). The film functions wonderfully as a stand-alone, however, possibly even better than it does as a sequel. I must admit I hadn’t seen either of the previous films and having the backstory of the characters exist as a slowly revealed, never fully explained mystery increased the allure of the film for me.

Darlin’ opens with a sequence of beautiful shots of a winter landscape stained by blood. This is the first film in the series written and directed by McIntosh — she starred in the previous films as The Woman and reprises that role here. Her subdued cinematic eye serves the story beautifully, with a muted color palette and shots of dying nature, a bleak hospital, and a shabby orphanage framed with melancholy restraint.

Two ragged, feral women emerge from the woods, and the younger is compelled to approach a Catholic hospital. After she is taken in, she’s handed over to the Catholic Girl’s Home, where a local priest hopes to exploit her rehabilitation in order to gain funding for his church. But soon, the girl, called Darlin’ from the bracelet she is found wearing, is followed by another. The Woman is hell-bent on protecting her girl, no matter who has to die in the process. 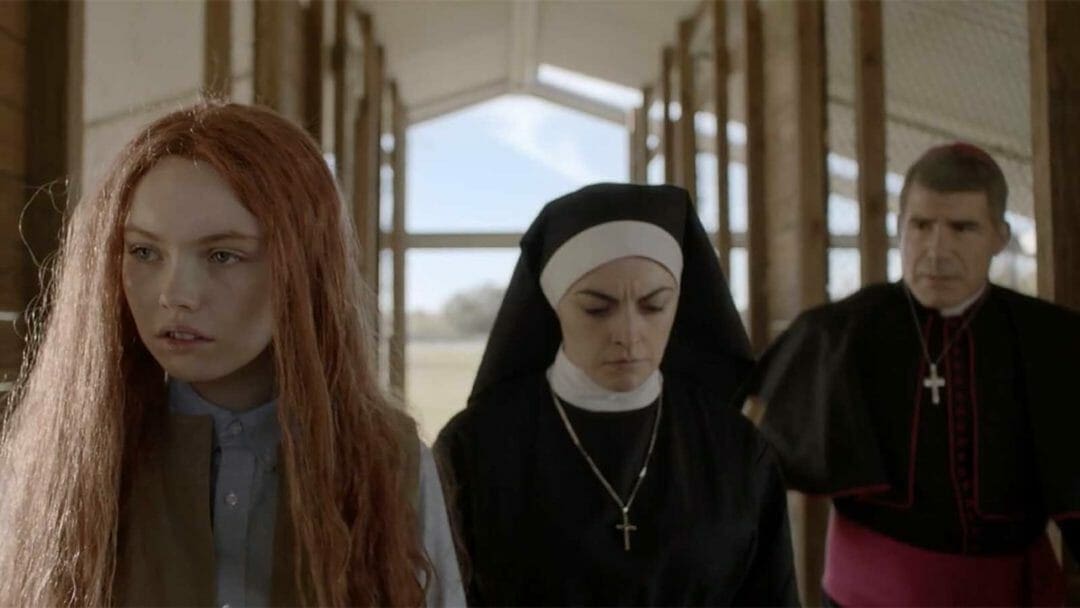 To say that Darlin’ is often obtuse with its themes is an understatement, but that doesn’t mean the film is a failure by any means. The Catholic Church is the clear villain, representing institutional patriarchy and the misogyny of civilization, both through its teachings and the abuses of the men in charge. It’s not a particularly original stance for a horror film. All the talk of hell and original sin from the ruler-wielding nuns suggest that McIntosh’s idea of church is stuck somewhere in the 1950s. But considering current events, I can’t say that a backward parish such as the one in the film doesn’t still exist when you look for it. While watching the film, I often found myself thinking some of the events depicted were unbelievable, then I would think about the news of late and realize it was more realistic than many of us would like to believe.

The authenticity of the film is hardly the point, considering that Darlin’ is really a dark fairy tale. It celebrates the wild feminine spirit while laying bare the lengths patriarchal systems will go to suppress it. It’s a story full of archetypes and clear bad guys, but the powerful performance of Lauryn Canny in the title role anchors the film in genuine emotion.

“Darlin’ celebrates the wild feminine spirit while laying bare the lengths patriarchal systems will go to suppress it.”

Canny has a striking look that resembles a fairy or forest sprite, with her red-haired, elfin features. She perfectly captures the mythological archetype of untamed nature that she and The Woman represent. Beyond her appearance, Canny is raw and believable in Darlin’s feral form. But as she becomes more acquainted with the civilized world, she reveals a heartbreaking layer of fear, innocence, and wonder. Canny never failed to keep me deeply emotionally engaged, making the horror of her exploitation all the more agonizing. Other standout performances include Maddie Nichols as Billie, a rebellious resident of the girl’s home who forms a close bond with Darlin’, and Cooper Andrews as the kind-hearted hospital worker who first gains the trust of the feral girl. 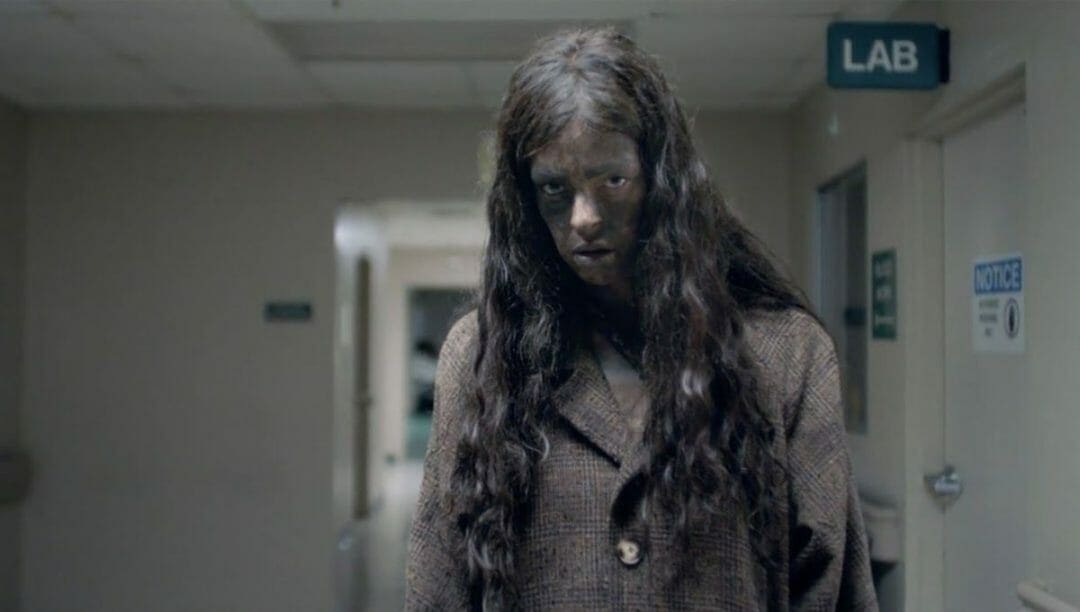 The impact of Canny’s performance carries the film and keeps it from slipping into satire. Even as the events get increasingly over the top, she and the other young actresses around her keep us genuinely involved. But even the excellent performances can’t redeem some of Darlin’s shortcomings. The film has lofty thematic ambitions, too lofty to effectively explore or conclude many of them. A side plot in which The Woman temporarily takes up with a matriarchal homeless commune is full of great characters and an effective thematic parallel to the wild women at the center of the film. But the thread is not offered the screen time needed to resolve itself.

Other plots and characters suffer the same fate. In Darlin’, individual scenes stand out as stellar short films, but in the end, they struggle to serve a cohesive whole. Other than the gore, the film is far more a dark drama than horror. This isn’t a bad thing, but the dramatics could have been better served.

In the end, Darlin’ is a promising film for Pollyanna McIntosh’s talent as an actor’s director and Lauryn Canny’s future as a formidable young actress. It has great ideas and performances to match, but it’s as untamed as the women at its core. It’s wild soul certainly fits, but sometimes story structure can benefit from just a little domestication.

Darlin’ is out now in limited theatrical release and VOD.  Are you a fan of Offspring and The Woman? Do you plan to see Darlin’? Let us know on Twitter, in the Nightmare on Film Street SubReddit, and on Facebook in the Horror Movie Fiend Club.

TLDR DARLIN' is redeemed from a lack of focus by strong performances and a beautiful aesthetic eye. Its themes are powerful and when they combine with an excellent lead performance from its young star, you will be emotionally invested and horrified, but not exactly scared. The film is too ambitious to land many of its excellent ideas, but it's worth seeing for the wonderful talents of Lauryn Canny alone.