Being a family can be hard. Think of your family; your loving parents or the fights you had with your siblings growing up. Everyone’s family has their quirks and dysfunction. Except now imagine that your mom is a robot, you share the same birthday with six adoptive siblings, and you all have superpowers. Oh, and your manipulative father just died. Think you got it rough? Welcome to The Umbrella Academy!

Netflix’s latest series is an adaptation of a comic that could be described as an angsty, punk rock version of the X-Men – written by actual angsty punk rocker! (Gerard Way of My Chemical Romance fame penned the original comic series, which was drawn by Gabriel Ba) Armed with heartwarming moments, slick cinematography, a colorful cast all set to a killer soundtrack: The Umbrella Academy might become your next obsession.

The show enlists a number of writers and directors, creatively led by Steve Blackman and Jeremy Slater. This Netflix series lovingly adapts the comic series as an ode to outcasts, mixing elements of sci-fi, body horror, superheroes, into a harrowing family drama. Though advertised as a quirky superhero romp, it focuses a lot more on the weight of family expectations and overcoming your mistakes to achieve your full potential. The Umbrella Academy is one of the most unique comic book adaptations we’ve gotten in a while and the best part; it’s one that everyone can relate to.

Taking plot points from the comics’ first two series, The Umbrella Academy follows the Hargreaves family: seven children born on the same day and adopted by an eccentric billionaire, Sir Reginald Hargreeves. Due to the mysterious conception of the children, they’re endowed with special abilities. Through relentless and abusive means, Hargreeves turns the children into a team “to save the world”. The children grow resentful towards him and each other, eventually going their separate ways. The family is reunited after their father passes away, which also brings one of them back from the future after being gone since childhood. He comes back with the knowledge that the apocalypse is eight days away and his family are the only ones who can stop it. Over the course of a week, the family will deal with time traveling assassins, secret psychopaths, the police, but worst of all: each other’s company.

“The Umbrella Academy takes an epic superhero adventure and scales it down to fit the mold of a family drama.”

The Umbrella Academy takes an epic superhero adventure and scales it down to fit the mold of a family drama. Along with trying to prevent the apocalypse, they battle with suspicions of their estranged siblings. Did someone in the family kill their father? And what happens when one of their own becomes a dangerous threat? Do they stand together and unite as a family? Or does their volatile nature drive each other further apart? Throughout the show, the family members are on a race against time to save the world while dealing with their inner demons. Each member has been left emotionally broken by their father, battling through depression, drug addiction, and various identity crisis’. The Umbrella Academy sports a large ensemble cast, and to their credit, give each character their fair shake in the story. However, every ensemble cast has their highs and lows and this show is no different. The show is defined by each character having their own distinct struggles and relations with each other. A pivotal part of the show is how combustible and emotionally erratic the family is, ready to unravel at any moment. Quick overview for time sake:

Luther aka Space Boy (Tom Hopper): super strength, some invulnerability due to being fused with a gorilla. The leader of the group, struggles with self-worth and loneliness. He’s in love with Allison.

Diego aka The Kraken (David Castañada): incredible knife throwing and combat skills. Hardened rebel, but cares deeply for his family. Moonlights as a vigilante after leaving the Academy.

Allison aka The Rumor (EmmyRaver-Lampman): can manipulate reality by lying. Abusing her powers led to fame as an actress, but also her failed marriage and losing custody of her daughter. In love with Luther.

Klaus aka The Seancé (Robert Sheehan): can talk to and conjure the dead. An eccentric drug addict, nobody takes him seriously and ignores his emotional pain. Talks to Ben frequently and is helped by him on occasion.

The Boy (Aiden Gallagher): can jump through time and space, ran away before receiving a name and was lost in the future for years. Formerly employed by The Commission who is trying to stop him from saving the world.

Ben aka The Horror (Justin H. Min): summons demons from under his skin, deceased already when the show starts. Acts as Klaus’ voice of reason.

Vanya aka The White Violin (Ellen Page): the introverted, seemingly normal member of the family. Resented by the family after writing a book about the family’s secrets. 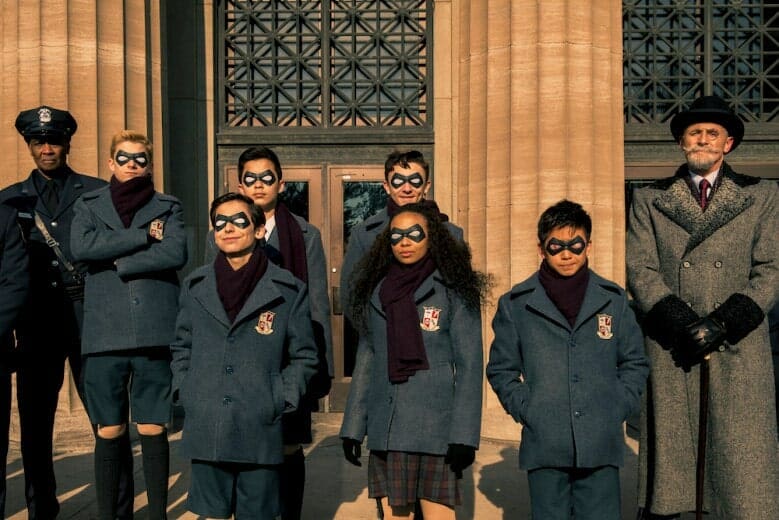 A show is usually highlighted by the characters, everyone loves discussing who their favorites are. For me, the MVP of The Umbrella Academy has to be Klaus. Portrayed magnificently by Robert Sheehan (please watch Misfits if you haven’t). If any character embodies the tone and themes of this show, it’s the fun-loving party boy Klaus. He’s never taken seriously by the family, they undermine the severity of his addiction, he time travels to the Vietnam War and falls in love. Another crowd favorite is Number 5, which Aiden Gallagher had the toughest task of the cast by portraying a 58 year-old man in a 13 year-old’s body. This kid has charm, he’s witty, great comedic timing, and easily kicks the most ass of anyone in the family.

Characters aside from the family, Kate Walsh was absolutely delightful as Mom, portraying the unique robotic sentience of the character. Also delivers big time in one of the saddest scenes of the series. And I have to give a shout-out to Pogo, the super advanced chimp who was Sir Reginald’s assistant. Adam Godley did a fine voice performance, but the spotlight goes to the effects department. For Pogo to look that real on a TV budget is astounding. The special effects as whole in the series are pretty superb.

On the weaker end of the spectrum, my biggest qualms with show were two of the main leads in Luther and Vanya. Most of Luther’s dry humor didn’t really play well off the zaniness of some of the other characters and situations the family is put through. He’s meant to have this false arrogance facade, but he mainly just mopes around. Luckily though, he does improve as the season goes. And then there’s Vanya, a very pivotal role played by Ellen Page. Since she’s the biggest name on the cast list, they give her a lot more to do than her comic book counterpart. Unfortunately though, to serve the plot, she is overly-naive when it comes to one of the main antagonists of the series.

As far as dysfunctional families go, The Umbrella Academy captures the core dynamic pretty well. When the family is reunited for the first time, the chemistry is there. You can feel the tension of a family that drifted apart, but immediately sink back into their familiar roles as if they never parted. Though each member serves as a distinct trope of a typical family drama, it’s the shows execution that makes it work. Clichés aren’t always a bad thing when used properly, which the show leans into gracefully on many occasions. In a few instances, doesn’t work as well. While the group dynamic is solid, the inter-family relationships are hit-and-miss. Anytime Klaus, Diego, and Number 5 teamed up was the best. One, you knew you were gonna get some killer action sequences. Two, Klaus’ silliness plays well off of Diego and Number 5. On the other end, everything between Allison and Vanya felt terribly forced. Taking a familiar dynamic (introverted sister resenting pretty, popular sister) and beating you over the head with it, calling each other “sis” every 5 minutes. But then again, does some of this awkwardness add to the dysfunction of the family? Kind of. The End of the World (or at least this review)

On the surface, it’s a quirky superhero adventure. Dig deeper, it’s a somber family drama about broken individuals. The Umbrella Academy has always been an ode to outcasts since its conception, but the series allows it to be accessible and relatable anyone with a family. On top of all that, it’s flat out entertaining as heck.

The coolest thing about The Umbrella Academy is the fact that it exists at all. This strange show based off a cult favorite comic series, blending sci-fi, comedy, and action into a series on the biggest streaming platform. Helmed by a creative team that truly loves the source material and given the freedom and resources to execute their vision. Please Mr. Hollywood, more mainstream weird properties like this!

Season one of The Umbrella Academy was released on Netflix February 15th, 2019 and has been met with generally positive reception. The ending definitely leaves things open for a second season and I’m fairly confident that’ll happen. Thing is the show took 18 months to complete and have already mined most the source material for the story. The third series of the comic was released in 2018 with a fourth on the way, so that should be plenty of time for second season t get going. Or they go their own route completely? Who knows! But what I do know is that I loved this series and highly recommend it.

TLDR On the surface, it’s a quirky superhero adventure. Dig deeper, its a somber family drama about broken individuals. The Umbrella Academy has always been an ode to outcasts since its conception, but the series allows it to be accessible and relatable anyone with a family. On top of all that, it’s flat out entertaining as heck.