After a somewhat muddled start in 1994, to a killer camp slasher that raised the stakes in ’78, Netflix closes out the third week of their chilling triple-feature RL Stine fueled summer bonanza with Fear Street Part 3: 1666.

In the final installment, Fear Street takes us back in time to the origin of the witchy legend that has haunted the previous films. With our heroes in ’94 still knee-deep in a serial killer wasteland, unlocking the truth may just be the secret to bringing an end to the Shadyside curse.

In the end of Fear Street Part II: 1978, Deena (Kiana Madeira) returns Sarah Fier’s hand to its rightful burial spot. Doing so transports her to the settlement of Union in 1666, where she possesses the body of Sarah Fier. Through this, we finally get to see who Sarah was. Much like Deena and her friends in 1994, they toil during the day to hang out at night. We see quite a few familiar faces in Union, with many of Fear Street’s previous cast returning as peasants; whether it’s because the ‘94 residents are direct descendants of original settlers or merely a stylistic choice of the film is left up to the viewer.

An echo of the events of 1994, Sarah/Deena can’t hide her feelings for Hannah Miller/Samantha (Olivia Welch).  And in Puritan times, two girls romantically galavanting in the woods under the cover of darkness won’t be looked upon too favorably, lest anyone witness it. And surprise, someone does. Accusatory fingers are pointed at the girls, and they are charged with bedding the devil himself. Hannah/Sam is captured, leaving Sarah/Deena to try and save them both, heading off into the woods to avoid capture and figure out just who has cursed their settlement.

Unfortunately, after the quick pace and strong momentum of 1978, being dropped into 1666 felt like a bit of a drag. I wanted to love the folky atmosphere, but it wasn’t enough to hold my attention. Being the third and final film of the trilogy, audiences of Fear Street Part 3: 1666 came into this segment knowing how and where it all ends for Sarah Fier. This is a finale and not just a prequel, so ideally we can skim through the first act niceties and get to the witchy business right away.

And not only does Sarah/Deena spend a good 20 minutes of her flashback setting us up, but once the game gets going, she sort of stumbles into the plot. After being accused of witchcraft, and not actually being a witch, she decides she might as well go ahead and become one.. only once she gets to the woods, she discovers a more nefarious plot and decides to judge the evildoers for something she was quite ready to do herself, instead.

And maybe because there aren’t any cool songs from 1666, we closeout our finale back in 1994. (with a lot of The Offspring, of course). Deena has learned the secrets of Sarah Fier’s death (which I’m not going to spoil here because that would be rude), and needs to shut down this curse once and for all, save her girlfriend Samantha from her possessed murderous state, and falala the end.

I understand Fear Street’s want to have 1994 be the main timeline of the trilogy. Our roots of the story, so to speak. Unfortunately, the lead characters of Deena and Sam didn’t win me over in Part 1. Their characters/story were a little too melodramatic and lacked levity. It was the two friends Kate (Julia Rehwald) and Simon (Fred Hechinger), and little brother Josh (Benjamin Flores Jr.) that really stole the show. It was odd for the weaker part of the franchise to be the carrying weight of Part 3. Even the far superior duo of Part 2, sisters Constance/Ziggy (Sadie Sink, Stranger Things) and Cindy (Emily Rudd) take a major backseat in the finale, only appearing as extras in the town’s muddy square.

But credit where credit is due. Time jumps are hard. A time-jumping trilogy is near impossible (unless you’re Evil Dead, Evil Dead II, and The Army of Darkness). Though the film may have some odd plotholes (like why is an underground cave system opening up underneath a church podium raised two feet above the congregation floor), I felt fully transported into each new setting as if RL Stine had started another hair-raising plot twist at the end of a three-page chapter. I was eagerly aboard this rollercoaster’s choices to swing to an entirely different cast in Part 2, to swing us back up to 1994, only to drop our leads from Part 1 into different roles in 1666.

” I felt fully transported into each new setting as if RL Stine had started another hair-raising plot twist at the end of a three-page chapter. “

With a trilogy spanning so many different time periods of storytelling, there are a lot of plot ends to tie. Though Shadyside does seem to have an unnatural ability for preserving underground cave systems and hanging trees, Fear Street does manage to tie a nice little bow on a complicated story.

The Fear Street trilogy concludes this Friday with Fear Street Part 3: 1666 on Netflix. Have you binged all three Fear Street flicks? Let us know your thoughts over in the Nightmare on Film Street discord! 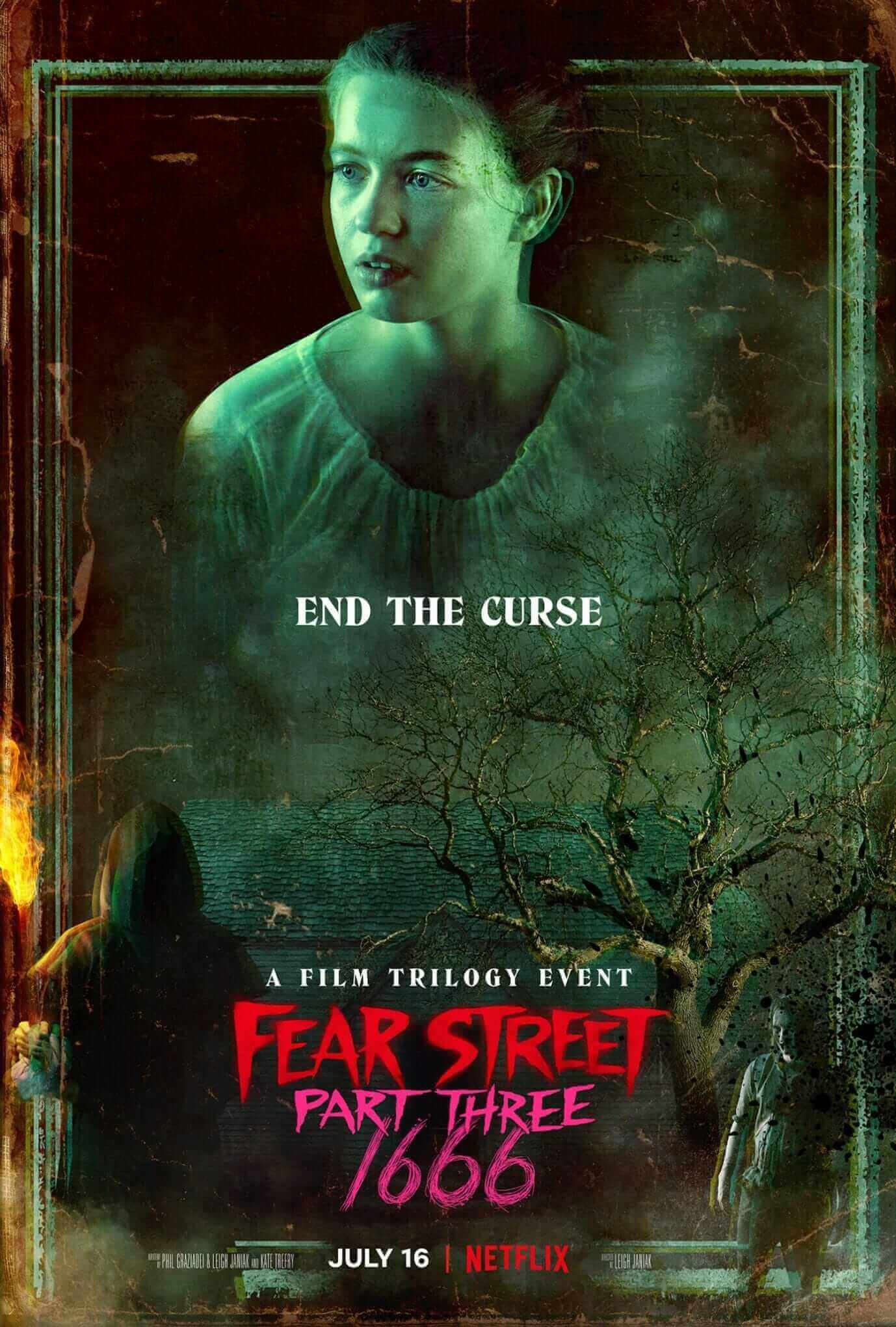 TLDR With a trilogy spanning so many different time periods of storytelling, there are a lot of plot ends to tie. Though Shadyside does seem to have an unnatural ability for preserving underground cave systems and hanging trees, Fear Street does manage to tie a nice little bow on a complicated story.