In part two of Netflix’s Fear Street filled summer, we’re heading backwards in time to 1978 where our resident Shadyside teens and tweens have flocked to CAMP NIGHTWING, where oh no, a crazed killer stalks the grounds.

Now living like a crazy old recluse, Constance takes us back to the good ole days of 1978 …only for her 1978 was a terrible time filled with murder and mayhem.

And too like Part 1, Fear Street Part 2: 1978 is directed and co-written by Leigh Janiak (Honeymoon), with story credits from Phil Graziadei (Honeymoon) and Kyle Killen.

First day of camp. 1978. A young Ziggy (Sadie Sink, Stranger Things) is already on her final strike for being sent home, and on top of that, receiving the brunt of the bullying from the rival Sunnyvalers. Her do good older sister and camp counselor Cindy (Emily Rudd) has gone through a massive personality change in the past year, and doesn’t offer Ziggy much help, too concerned with looking the part of a Sunnyvaler and getting her butt out of Shadyside; armed with a new polo and sweet boyfriend Tommy (McCabe Slye).

and the leaves hanging down,

and the grass on the ground”

Left to her own devices, Ziggy plots revenge on the mean girls with the sheriff’s son Nick Goode (Ted Sutherland). Cindy, Tommy, and her ex-Shadyside pals Alice (Ryan Simpkins) and Arnie (Sam Brooks) head off into the woods to find the home of the fabled witch, using a hand drawn map from the journal of Camp Nightwing’s SOLE ADULT, SERIOUSLY WHERE ARE ALL OF THE ADULTS, Nurse Mary Lane (Jordana Spiro). This is right after the nurse, just having shared her daughter was one of the fabled witch’s possessed serial killers, tries to stab counselor Tommy, fails, and is carted off in an ambulance.

With most of the camp counselors off in the woods hunting for the witch’s haunting grounds and the camp’s sole adult whisked away by paramedics, things really take a turn for the deadly. Kids are scattered everywhere in the dark playing a night game of Color Wars, right as a crazed serial killer marches into the camp, hellbent on picking off Shadyside campers with an axe. And oh boy, does he. Like ’94, Fear Street Part 2: 1978 lays the nostalgia on thick. The soundtrack is kickass, but affronting; it plays like a jukebox with only 15 seconds of every song from the 70’s stuck on shuffle. The songs themselves are killer, but they only work within the film about half of the time. There are only so many times I can put up with trying to hear dialogue over a song I’d really rather listen to at full volume in a hammock on the beach.

I did drag ’94 for being a little too polished on the 90s aesthetic, and I’m also going to call out ’78 for the same thing. Everyone was wearing stripes, polos and ringers to perfection, but they look straight off the hanger – on everyone. For how hard the preppy Sunnyvalers and cursed Shadysiders are pitted against one another, I really would have liked to see some of that ‘rough around the edges’ Shadyside charm emulated in wardrobe and styling. But alas, looks like everyone had Gap money in ’78. (yes, I checked. Gap existed back then.)

Getting over my want for grit, Fear Street Part 2: 1978 quickly tops its ’94  predecessor. The plot moves swiftly and with objective, escalating with the violence of a summer slasher worthy of the Jason Voorhees homages. ’78 divides our dueling sisters into two distinct set pieces, and moves much quicker as a result; thanks to the great down-to-earth performances of Sadie Sink and Emily Rudd holding the emotional weight and momentum as we see-saw back and forth.

Being brutal also helps earn Fear Street Part 2: 1978 some points. Still perhaps needlessly taking the opportunity of having the teens say “fuck” at every chance, the R rating allows some pretty gruesome moments with our killer – who doesn’t only brutally slaughter teenage counselors, but wee campers as well. Hell yes let’s kill some kids*. There are quite a few face chops on camera, and though they have a slightly computer-rendered quality, there isn’t a horror fan in the world who’ll complain about a character getting an axe to the face. At least, this one won’t.

“…there isn’t a horror fan in the world who’ll complain about a character getting an axe to the face.”

Best of all though, Fear Street Part 2: 1978 nails that summer vibe. We catch campers playing archery, hanging in the mess hall, and canoodling in cabins. There’s a reason why the Friday the 13th franchise amassed twelve films; summer horror movies hecking rock. (yes, I know one of them is in space, and another the other says it’s in Manhattan but is mostly just boat)

Overall, Fear Street Part 2: 1978 is a little too polished, but brutal where it counts. The story has strong momentum that blazes through a killer summer camp slasher, finally dropping us off at the door of 1666, eager to see where this trilogy completes.

Fear Street Part 2: 1978 is now streaming on Netflix.  Let us know if you’re a Fear Street fan in the Nightmare on Film Street Discord! 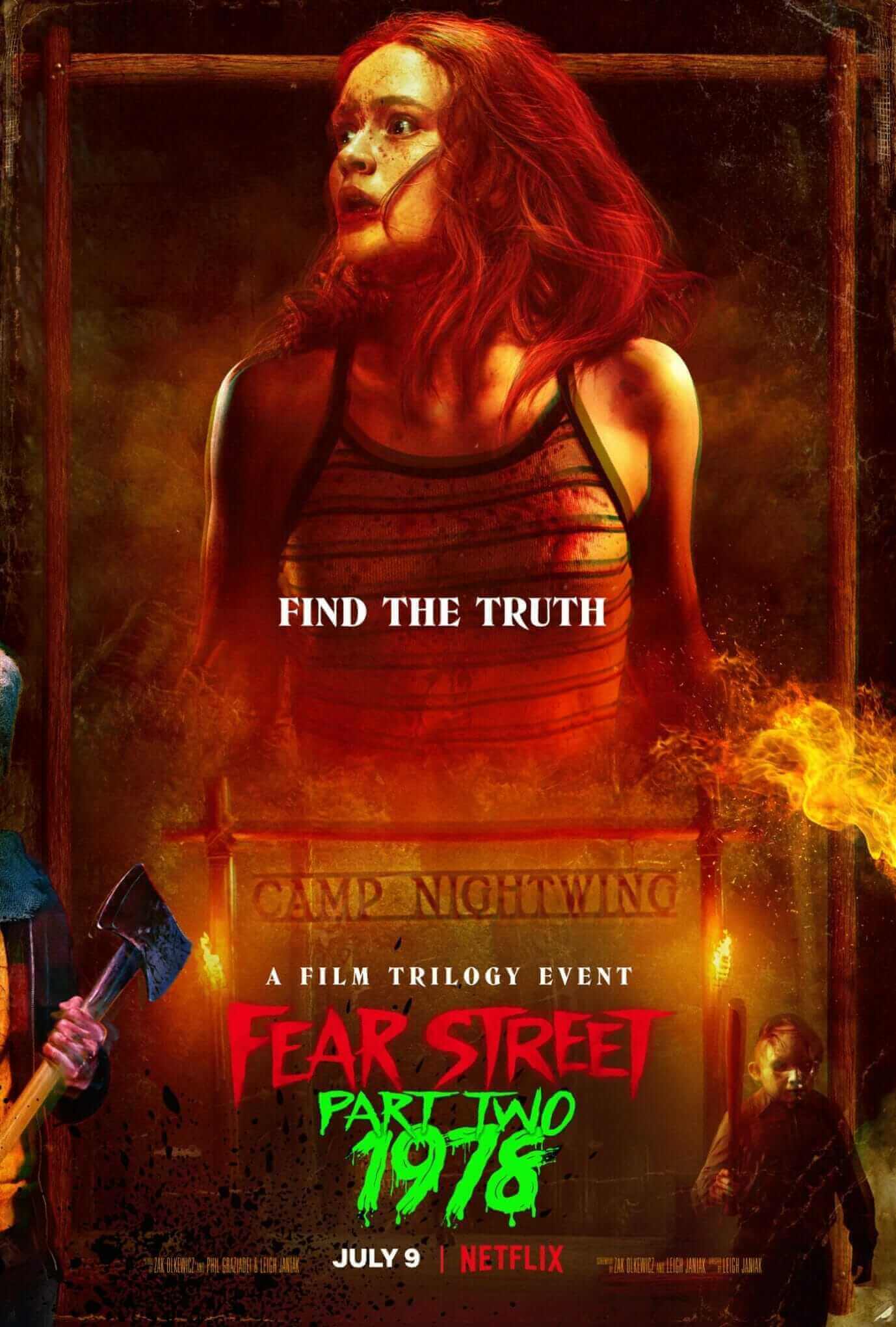 TLDR Fear Street Part II: 1978 is a little too polished, but brutal where it counts. The story has strong momentum that blazes through a killer summer camp slasher, finally dropping us off at the door of 1666, eager to see where this trilogy completes.