Filmmaking is a tough racket–it’s hard enough to get the film made, to make it through the stages of production, and to acquire distribution. Then you have to get people to, you know, see your film, and hopefully care about it. As Danny Boyle notably once said, “To be [an artist], you have to lead. You have to be psychotic in your desire to do something. People always like the easy route. You have to push very hard to get something unusual, something different”. In I Blame Society, filmmaker Gillian Wallace Horvat plays Gillian Wallace Horvat, a filmmaker who seems to take this quote to heart–if not too literally.

The film sees fictional G.W.H. become obsessed with a seemingly innocuous comment by some of her friends: she’d make a good murderer. While some might say “hey, um, what do you mean by that?”, Gillian takes it as a compliment, nay, as a challenge. She sets out to make a film about how she would go about killing people, you know, if she were to do that sort of thing.  Of course, this being a horror film, it escalates from there–you can’t fault her dedication to the craft.

A Murder Auteur in the Making

The cast is rounded out by Keith Poulson playing boyfriend Keith; Chase Williamson (Scare Package) playing the filmmaker’s friend Chase; Lucas Kavner and Morgan Krantz playing a set of hopeful indie producers. Gillian’s first victim is a pure accident, but the event triggers the sociopathic detachment and callousness the character expresses so early in the film. From there, she goes on a literal murderous rampage in a rather meta-film that repeatedly questions the implications of her actions, both in its social meaning and its artistic merit.

There’s a darkly humorous undertone to the film–Gillian’s stone-faced monologues to the camera explaining the character’s actions, the situational irony of some of the budding auteur’s decisions, and the film-within-a-film elements of her exhibiting the film we’ve just seen to producers who just aren’t feeling it. The writing is largely successful in carrying that tone, but the film’s dark, dry viciousness–think of a drier Behind the Mask: The Rise of Leslie Vernon with the obsessive filmmaker proclivities of perhaps a Tarantino–is certainly not everyone’s cup of Earl Grey tea.

I Blame Society does an effective job of feeling like a filmmaker’s under-budget but talentedly-filmed one-woman show (which, in real life, it is not). The film is adeptly made from a technical standpoint, and it largely manages to feel like a filmmaker telling the tale with nothing but her own camera-work, grit, and determination (minus the fact that the sound is much better than she’d be likely to get if working on her own). It’s altogether a technically accomplished example of cinéma vérité horror cinema.

The film’s concept itself isn’t necessarily the most novel, but it does carve itself out a little territory with the film-within-a-film metaness and the slight commentary on the subtle social belief that the filmmakers who make dark, dreary films are harboring darker potentials themselves. It’s a film that hits that commentary on the head and says “yes, and?” from its very first minute to its last. 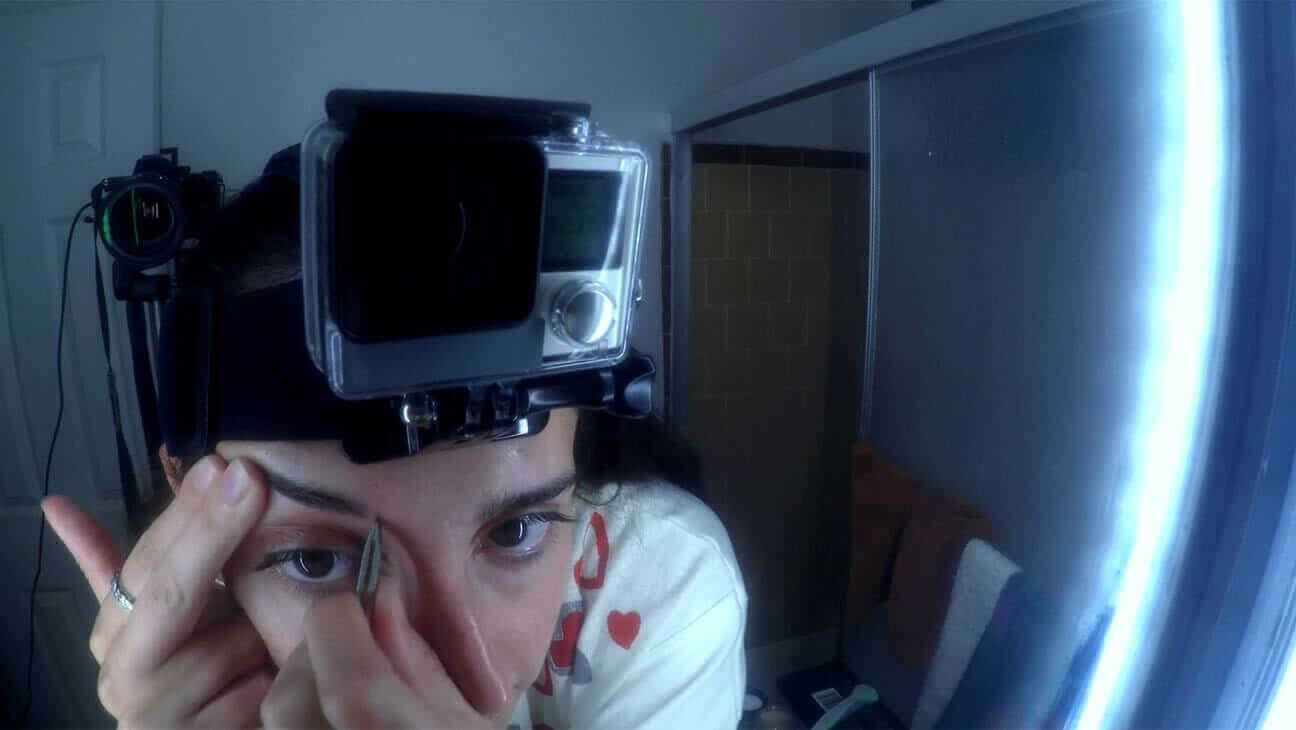 Much Ado About Nothing

Unfortunately, the payoff here for I Blame Society is limited. Meta-concepts largely only work if the meta-ness is entertaining and if they serve some sort of message. In this particular case, the film lands at somewhat entertaining–nothing that happens feels particularly new, the bodies stack by less than interesting means, and it’s an engaging enough journey to a lackluster ending. The most entertaining and novel part is watching Gillian manage to be a one-woman film crew in the midst of this spree, a gimmick that generally lands throughout. Yet the film’s ironic meta-attributes don’t really mean or say much of significance.

The dry, dark humor is also unfortunately a mixed bag. Like all works of dry, dark humor, the film’s reception also hinges somewhat on the effectiveness of both the performances and the writing, and it’s here where the film falls a little short. The players as a whole are passable in their roles, but there’s never quite that level of performative realism that really sells the believability of this kind of pseudo-documentary cinema. Additionally, a lot of the characters have frankly flat emotional responses, so it’s difficult to latch on and care about what’s happening. It makes sense for the central character, Gillian, whose cold demeanor is central to making the film work, but it’s still hard to care about her character or any other character in the film.

“a technically accomplished example of cinéma vérité horror cinema. […] Yet the film’s ironic meta-attributes don’t really mean or say much of significance.”

The flatness of the characters simultaneously fails to pull the humor out of the dark, dry story in moments throughout the film–there are moments of irony but it’s not quite enough to save a film that’s too savage to be hilarious, not savage enough to be frightening; meta-enough to be a strong concept but not meta-enough to pull that concept off. There’s something to say here about the sexism of the L.A. film industry on indie female filmmakers, for example, but the actions of the ‘protagonist’ aren’t actions she’s convincingly driven to–they’re implied in her unprompted musings on a project she’s inexplicably committed to ‘from the drop’, and her filmmaking seems to serve as the justification of those impulses rather than the consequence of a filmmaker driven to the edge. Ultimately, I Blame Society isn’t a ‘bad film’ by any counts. The film’s technical attributes are commendable, the concept isn’t entirely novel but hasn’t exactly been done before, and the performances are palatable in a film that may be quite satisfactory to fans of films like Behind the Mask: The Rise of Leslie Vernon. At the same time, once the novelty of the film’s central conceit fades, there isn’t enough believability, emotion, humor, scares, meaning, or innovation to move the film the extra step to greatness.

There’s a lot of potential here, and Gillian Wallace Horvat certainly shows enough directorial talent and knowledge of genre conventions to shine as a director worth watching. The technical choices here are thoughtful, and there is something to be said here even if it doesn’t fully land. From a genre lover’s standpoint, it’s worth the runtime and it may be exactly what some hopeful audience-goers are looking for… that said, it’s a film that reaches for a target it doesn’t quite hit.

I Blame Society is available on VOD now! Let us know what you thought of Gillian Wallace Horvat’s meta murder movie over on Twitter, Reddit, Facebook, and in the official Nightmare on Film Street Discord. Not a social media fan? Get more horror delivered straight to your inbox by joining the Neighbourhood Watch Newsletter. 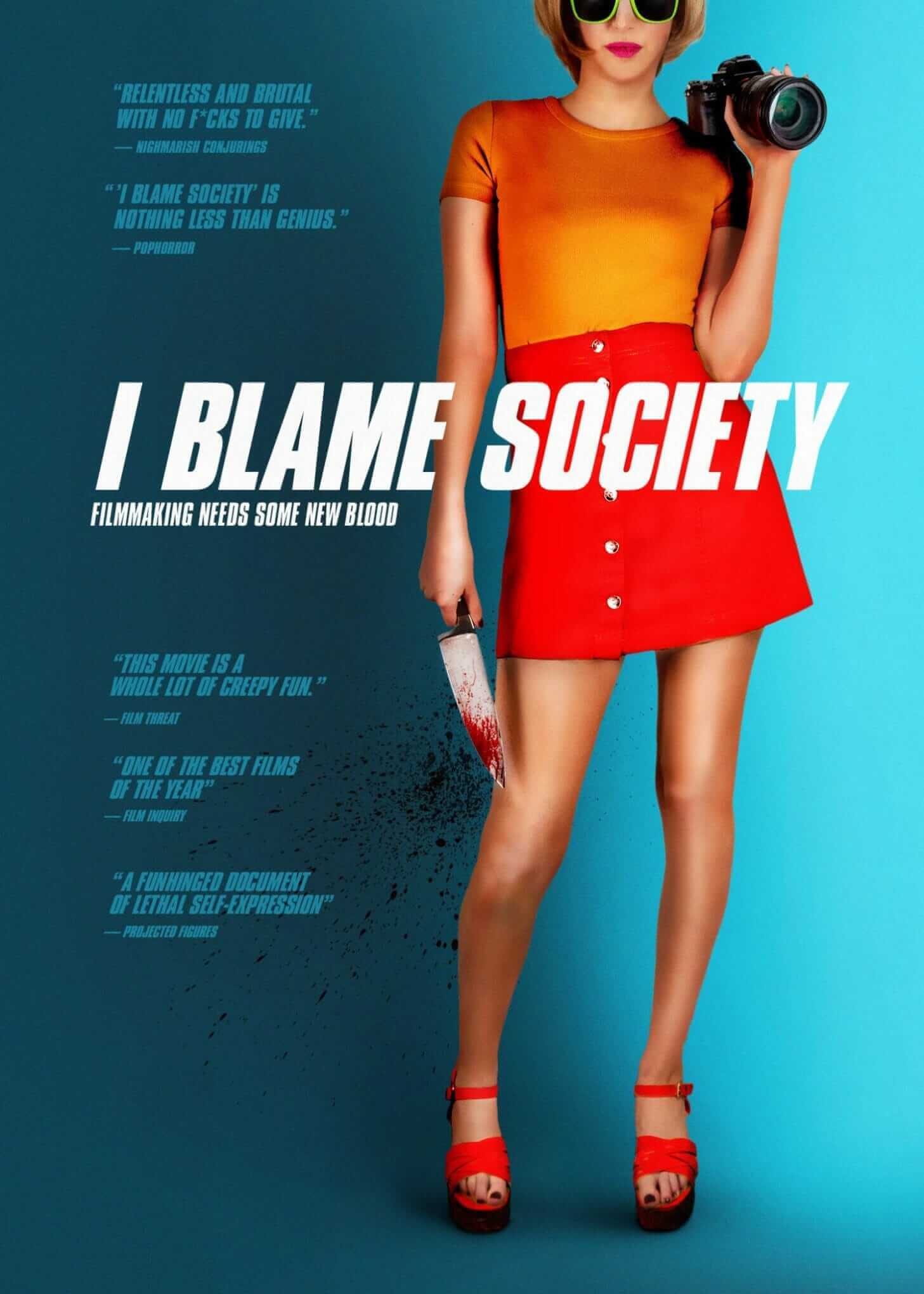 TLDR There’s a lot of potential in I BLAME SOCIETY, and Gillian Wallace Horvat certainly shows enough directorial talent and knowledge of genre conventions to shine as a director worth watching. The technical choices here are thoughtful, and there is something to be said here even if it doesn’t fully land. From a genre lover's standpoint, it’s worth the runtime and it may be exactly what some hopeful audience-goers are looking for… that said, it’s a film that reaches for a target it doesn’t quite hit.