SPOILER ALERT: I don’t actually want you to read this review of Hunter Hunter. Everything that I enjoyed about this movie was something I didn’t know was coming and I would hate to steal those Holy Shit! moments away from you. It seems counterintuitive to say “don’t bother reading this thing I put a bunch of work into” but some stories are better the less you know about them. Truth be told, all I knew about this woodsy thriller before pressing play was the title, and that it was being released by IFC Midnight. That was good enough for me, but it’s perfectly understandable that it might not be enough for you so how do we go about recommending this movie without giving anything the goods?

Film reviews have a pretty standard structure and while they aren’t universally the same, knowing the pattern can help you avoid anything you wanted left unspoiled before seeing the film yourself. Obviously, I can only speak to how I personally structure my reviews but I’m sure you’ll recognize the echoes of every film review still knocking around inside your memory. Generally, the opening paragraph has a few broad strokes about the movie’s tone and story, with a simple hook you can’t avoid. For example, “but who (or what) is behind all these strange disappearances?” or “…leading to a mind-melting climax unlike anything you’ve ever seen before“. In fact, there’s probably one in big green letters, pulled from later in this piece, just underneath this paragraph.

“Hunter Hunter is a twisted journey into the darkest parts of the forest where only the most bloodthirsty animals survive.”

My second paragraph is usually reserved for shout outs to the cast and crew, and anyone else involved in delivering the feature to movies theatres, vod, or streaming platforms. If it weren’t for all my rambling, that’s where you would have found this little paragraph here. Hunter Hunter is written and directed Shawn Linden, and stars Devon Sawa (Idle Hands), Camille Sullivan (The Butterfly Effect), Summer H. Howell (Cult of Chucky), Gabriel Daniels (Fractured), and a surprise appearance from Nick Stahl (Disturbing Behavior). As mentioned above, this eye-brow-raising game of hunter and hunted is being released by your friends at IFC Midnight who almost single-handedly kept horror and genre film alive this summer by pivoting quickly in the early days of the Covid-19 Pandemic and moving their release schedule to drive-in movie theatres. Yay!

My next two paragraphs usually consist of a brief synopsis of the first act of the story, maybe more if it’s a relatively uneventful opening. While I would never give away anything surprising (and generally never anything that isn’t already shown in a trailer or outline in the Letterboxd description), these are the juicy paragraphs you might consider skipping. TLDR; Joespeh Mersault (Sawa) is a lifelong fur trapper like his father, and his father before him. He and his wife Anne (Sullivan) have carved out a hard but honest existence in the remote wilderness. Times are hard enough with the value of fur on the decline but a rogue wolf has begun pouching their traps threatening their livelihood and their lives. Anne worries it’s time they think seriously about getting their daughter Renee (Howell) a proper, formal education, not to mention calling in the Forest Rangers to hunt down this damn wolf. But it isn’t until Joseph heads into the woods to hunt, and a mysterious stranger (Stahl) appears that the family realizes there is a bigger, badder ready to blow their house in. Oh, hey look! A related photo 🙂 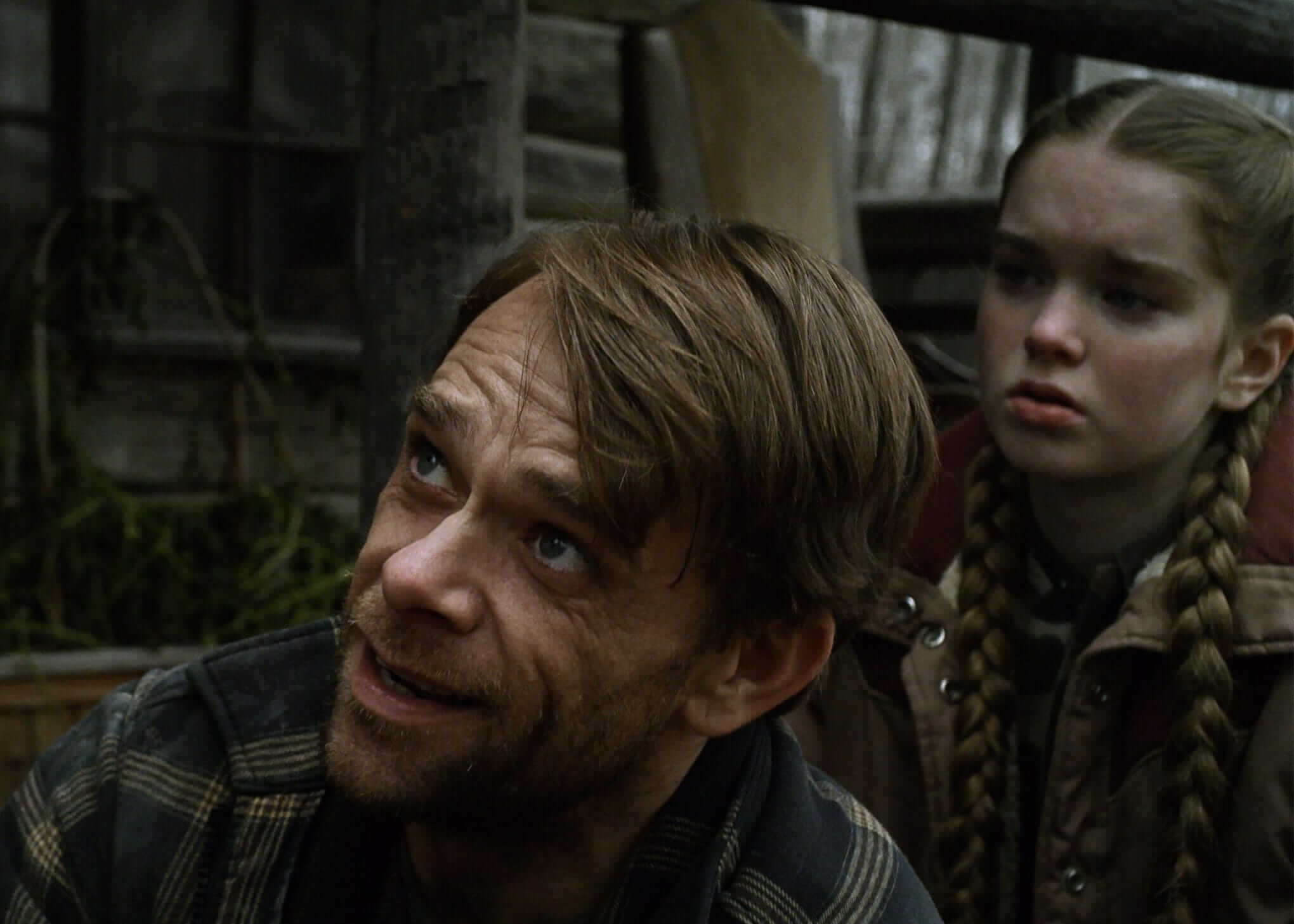 Okay, so- here’s where the real review begins. Everything else before this was either designed to give you context for the next two paragraphs or intrigue you enough with those broad strokes to keep you engaged until now. And the same could be said about horror and genre film, amiright? I don’t know about you but I’ll forgive a slow-building first act or a meandering second if I’m given a what the f*ck?! ending. Another common technique to remain vague in your movie review is to draw comparisons to other movies you already know and love, and while Hunter Hunter is nothing like Brian DePalma’s Carrie or Frank Darabont’s The Mist, there’s no denying that what makes those movies rewatchable is their head-turner of an ending. You spend time with the characters, formulate opinions of them, and build futures for them based on the rules of their respective subgenre. But it isn’t until their entire world is flip-turned upside down that you truly appreciate their sad, tragic journey.

I hope you haven’t read this far. This is where things get dangerous. I’ve been vague as long as I can and now, with the social links and the movie’s approved poster so close I have no space left but to talk frankly and directly about what this movie is and why you should watch it because you really should watch it. Hunter Hunter is a twisted journey into the darkest parts of the forest where only the most bloodthirsty animals survive. Oh, hey look! It’s that pull quote from the beginning. Sure, there were whole stretches of this movie where I quietly said to myself, “I don’t think this movie’s for me,” but HOLY SHIT did it win me back with what I can only describe as the most visceral, gruesome finale of the year. I’m not exaggerating. I’m not being hyperbolic. Hunter Hunter has the most effective, macabre, gut-punch ending of 2020. That sentence pretty much sums things up. Let’s go ahead and make it real big for anyone skipping through for the highlights and the rating card below.

“Hunter Hunter has the most effective, macabre, gut-punch ending of 2020.”

Shit, I didn’t even talk about the shut the front door! moment at the beginning of this morbid tale of survival. Or the fact that literally everyone in this movie delivers crazy-good performances. Sure, it’s always a good idea to finish off with something that might give the reader FOMO for a movie they haven’t seen yet but I’m going to chalk that up as failure on my part. It’s hard enough to write, let along think about anything other than how weird the world is now. Movies have pretty much been my only escape but even then, my mind tends to wander or spiral and take me out of the movie. It’s important to seek out the movies that grab you by the collars and shake you so hard that you completely forget about the world around you, even if it means staring wide-eyed at something so horrifying (yet rewarding) that you’re literally left speechless as the credits slowly scroll past your dazed expression.

Shawn Linden’s Hunter Hunter, released by IFC Midnight, is available now in select threatres, VOD, and OnDemand! Let us know what you thought of its creeping intensity and blood-splattered finale over on Twitter, Reddit, Facebook, and in the official Nightmare on Film Street Discord. Not a social media fan? Get more horror delivered straight to your inbox by joining the Neighbourhood Watch Newsletter. 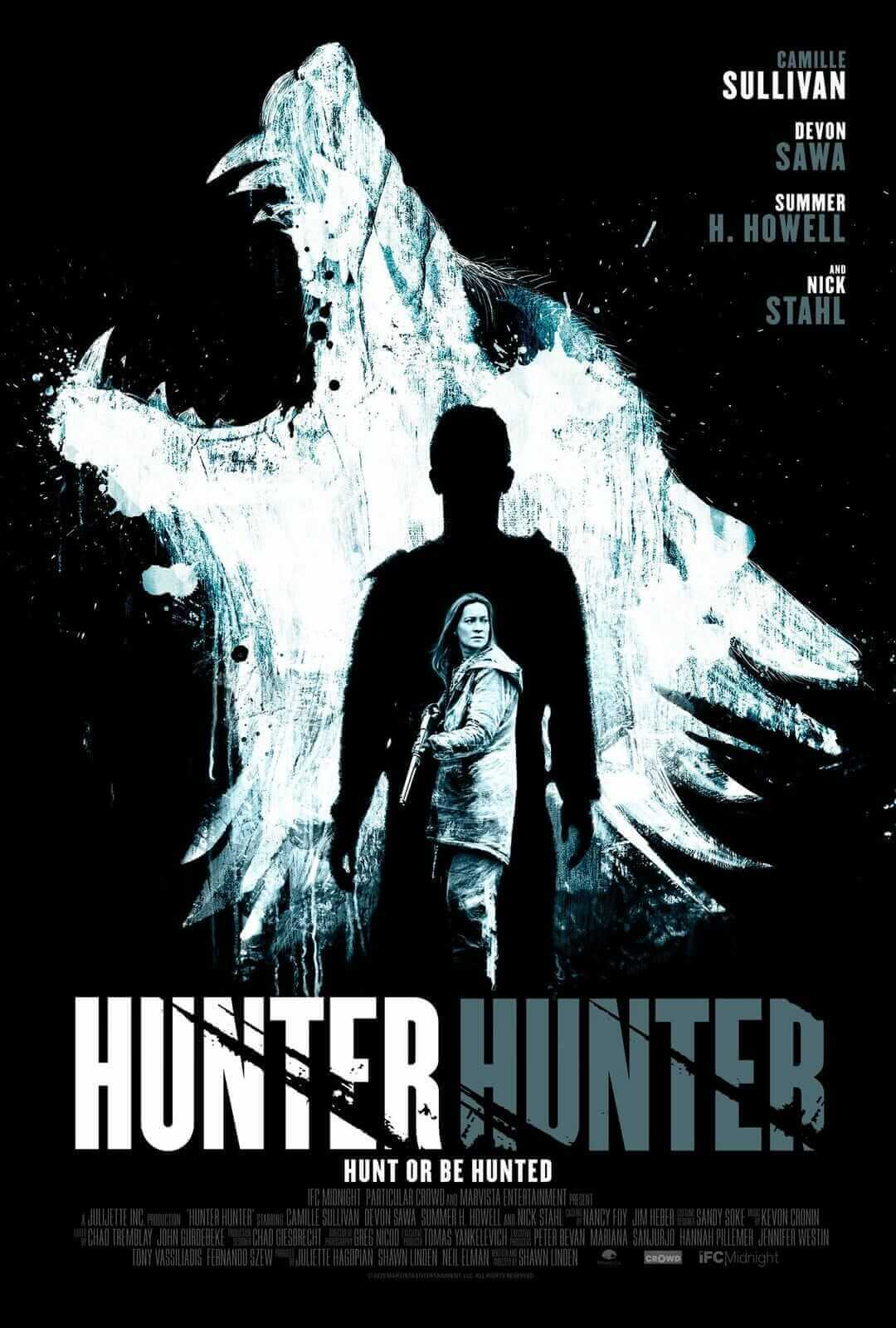 TLDR Hunter Hunter is a twisted journey into the darkest parts of the forest where only the most bloodthirsty animals survive. Sure, there were whole stretches of this movie where I quietly said to myself, "I don't think this movie's for me," but HOLY SHIT did it win me back with what I can only describe as the most visceral, gruesome finale of the year. I'm not exaggerating. I'm not being hyperbolic. Hunter Hunter has the most effective, macabre, gut-punch ending of 2020.