[Review] INTO THE DARK: PURE Wages a Powerful Rebellion Built on A Foundation of Feminism 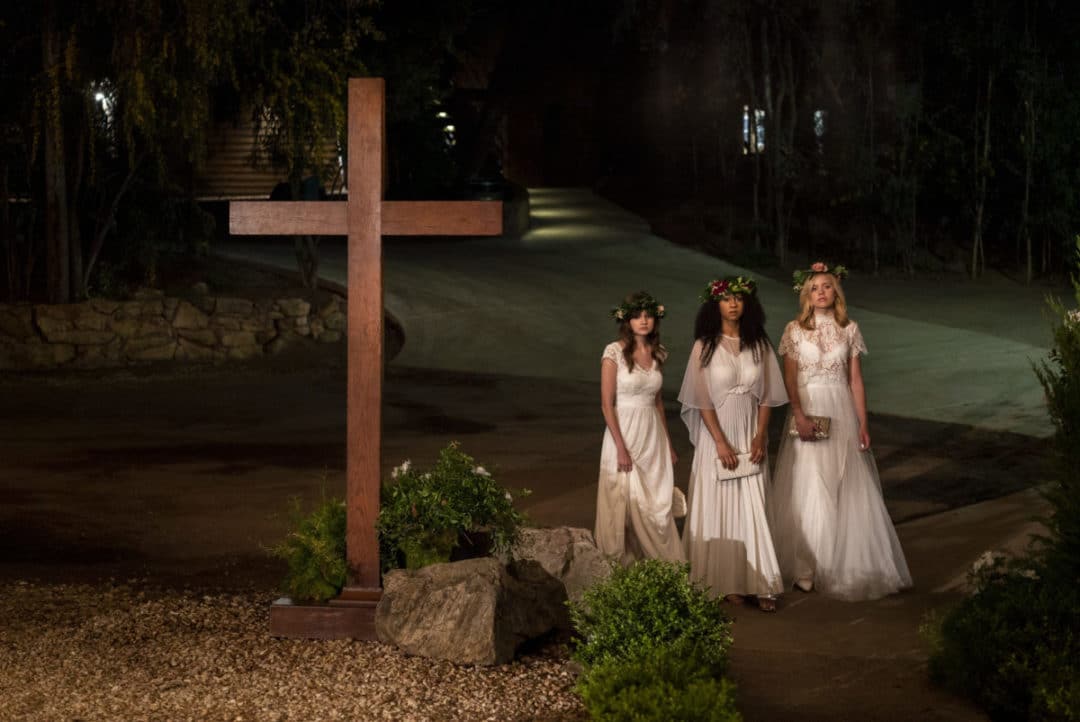 The final episode of a series is a tricky one to successfully produce. It can make or break an ensemble as it usually leaves viewers satisfied or disappointed, especially when it comes to an anthology-type platform. Even a consistently successful series can be severely tainted by wrapping up its run with a sub-par impression. The last act, per se, should inspire thought, nail all the entertainment bases, and keep the audience guessing as to what comes next. Blumhouse and Hulu have brought life to an intriguing year-long series of holiday horror films with Into The Dark. Each maintains quality and content as a slew of talented directors and writers have explored the darker sides of celebration. The twelfth, and last, episode of the series’ first season hits all the high notes as sexual integrity takes the holy forefront of feature debut director Hannah Macpherson’s Daughter’s Day tale, Pure.

If you want to end your haunted holiday anthology with a cringe-worthy bang, it’s telling the story of a group of fathers holding their daughters’ virginal purity as the most sacred dedication they could promise during a weekend retreat to celebrate the Daughter’s Day holiday. When a misunderstood presence tempts the young women with individuality, all hell (so to speak) breaks loose. Macpherson has crafted a coming-of-age terror draped in chastity, hypocrisy, awareness, and righteous good fear. Pure is an intentional genuflection to modern horror boasting a trinity of powerful cinematic factors.

“…an ethereal and visceral aesthetic all at once […] Pure exceeds expectations”

At the height of a feminism awareness wave, tensions still flare when it comes to freedom and equality. Though Pure focuses on a religious microcosm of female roles and subordination it serves as a great relevant allegory for the issues women, young and old, face today. Our protagonist, Shay, finds herself in a unique atmosphere when she accompanies her newly found father, his rebellious teenage daughter Jo, and a like-minded group on a Christian religion retreat. Centering around their virginity and abstinence from physical and mental sinning, Pure stands grounded in an all too realistic environment where wives and daughters are viewed as vessels of Godly service rather than as human beings with free will (trust me, I live in the Bible Belt). Surrounded by self-righteous men, a radical pastor, helpless young women, and the curse of Lilith herself, Shay is caught between chastity and the natural temptations of life.

Pure expertly exposes the problems with religious institutions bent on keeping women as servants to man. They are preened and controlled in the most simplistic, yet terrifying ways possible, causing the true message to rise above the awkward and humiliating scenarios. Whether it be embracing their sexuality or wearing a dress of their choice, the young girls are restricted and punished for any choice they make out of line with the organization’s beliefs. With every odd scene from Father Seth’s overly revenant speeches to the horrendous exchange of purity rings from father to daughter, Pure is a progressive but haunting look at the traditions that still bind women today. The importance of this theme could not be any more relevant as the girls decide which power serves them for the better as individuals: religion or independence? The scariest part about Pure is the hidden realization that sometimes you cannot have both. Walking hand-in-harmonious-hand with the meaning behind Pure, the story blooms into a fantastic coming-of-age sequence. While all of the young women are under religious restraint, the liberty of adolescence unfolds before them. Each of the female characters are making their way to the crossroads we all face when our inner personalities begin to manifest. Macpherson disguised this underlying theme well as the challenge of choice is one that can apply to any viewer. Engaging viewers with elements of nature, the visual contrasts of light and dark, and the appropriate depiction of rebellious teenage behaviors, Pure embodies the growth of the individual with ease and confidence. The pledge of purity is seen as a life or death situation as the girls are forced to embrace two relationships, one with their heavenly father and one with their earthly father, and the young men are groomed to be warriors of a higher power.

Shay’s battle between fitting into the group, her father’s expectations, and her inherent nonconformity is a brilliant take on the decisions we face as we enter adulthood. As we leave the thoughts and beliefs of our elders behind, we gain strength in the paths set forth by others. Outcasts like Lilith. Pure evenly satisfies the decision to embrace Christian tradition and sheds light on the troubles faced by the faithful in the eyes of a more alternative society. The dialogue, clean and fluid, sets up the balanced discussions of setting boundaries, sexual predilections, and the grief received from those who disagree with one’s lifestyle, whatever it may or may not include. The central coming-of-age story in Pure adequately and intentionally serves the journey that sons and daughters of the world travel and embraces the free will given to each person as they grow up, whether it be by God or by nature.

“Where most episodes and films fail, Pure’s third act is surprisingly treacherous and gratifying thanks to a balanced presentation of great acting, proper gore, and horror worthy visuals.”

No horror segment would be complete without the presence of evil through effects, visuals, and sound. The musical tracks of Pure are soft, contemporary, and empowering adding a melodic layer of present-day feminism to the modest dress and environment of the camp. In full celebration of their virtuous promise to God and their fathers, the young women don all white attires that draw attention to the display of purity and innocence. The look and feel of Pure plays with delicate tones while summoning quality transitions of evil incarnations as the plot progresses into strictly horror-specific circumstances.

As Shay learns more about her father, the motives of the church, and the legend of Lilith’s creation and banishment, she is thrust into darker circumstances where the realistic horrors are mixed in with more supernatural forces. When she, Jo, and some of the other girls on retreat awaken Lilith’s spirit bizarre events begin to plague the camp. The menacing form of Lilith with vibrant red hair in black lace against the virginal white outfits of the young women gives Pure an ethereal and visceral aesthetic all at once. The imagery is contrasting and organic. Full of shocking jump scare cuts and gratuitous, yet genuinely creepy, scary images, Pure exceeds expectations. Where most episodes and films fail, Pure’s third act is surprisingly treacherous and gratifying thanks to a balanced presentation of great acting, proper gore, and horror worthy visuals.

“The complex, yet compelling debate initiated by the plot is not only relevant to those exploring the rights of feminism, but also to those struggling with the internal pressures of decision-making.”

Pure is a contemporary exercise in storytelling that tackles some severely controversial themes and social commentaries. While some of the dialogue and scenes had me literally gushing frustration and anger, I instantly respected the messages set forth by Macpherson (as well as Paul Davis and Paul Fischer who share story credits) and the emotion the episode drew out of me. The complex, yet compelling debate initiated by the plot is not only relevant to those exploring the rights of feminism, but also to those struggling with the internal pressures of decision-making. Pure maintains a fresh, consistent level of uncomfortable intensity and aggressive outrage. I loved every single second of it.

Overall, Lilith serves as an appropriate representation for the evil we fear, one that has been instilled in our womanly beings by the institutions set forth by societies long ago. We’re constantly torn between right and wrong, expectation and punishment, and the presence of Lilith’s independent, but “demonic” ways constantly looms over every decision we choose. Pure utilizes its platform with thought and heart, challenging audiences to filter out the negative from their existence on their own accord. What do we allow ourselves to do or refrain from doing? Pure assures us that’s all for a woman to decide… for herself.

What do you think of Into The Dark’s September episode, Pure? Have you kept up with Blumhouse and Hulu’s Into The Dark series this past year? Are you ready for another 12-month holiday horror anthology? Share your thoughts over on Twitter, Reddit, or in the Horror Movie Fiend Club on Facebook!

Review: INTO THE DARK: PURE

Summary Pure breaks down the social and spiritual taboos when a young woman sets out for an intense Christian purity retreat with her biological father and sister to celebrate Daughter's Day with forced vows and strange promises. This story exceptionally navigates the stigmas of religion, feminism, and adolescence against the backdrop of a relevant climate while it drives home the horror with dark themes and quality scares.

Plot Against The Patriarch