[Review] INTO THE DARK: TENTACLES Wraps Itself Around Sex, Romance, and Body Horror

As the world has learned to cope with the crippling anxieties and confusing comforts brought on by nearly a year of quarantining and distancing, the fear of isolation has brought on all new meanings to the horror genre. Blumhouse and Hulu have revived their holiday horror anthology series, Into The Dark, with the first episode to be released since July 2020 with a cosmically connected sci-fi love story.

Tentacles, directed by Clara Aranovich (In The Dark) and written by Alexandra Pechman (Channel Zero) and Nick Antosca (Antlers), joins romance with repulsion as two people find themselves alone together in a literally consuming relationship. Starring Dana Drori (Freaky), Casey Deirdrick (In The Dark), Kasey Elise (Mid90s), and Evan Williams (Escape Room), the horror of Tentacles begins when “A couple falls head-over-heels into a new romance and entwine their lives–until their intimacy transforms into something terrifying.” Replacing hearts and flowers with limbs and leeches, Tentacles puts love and body horror in a firm embrace and squeezes tight.

Tentacles wraps its limbs around a love story first and foremost, however it hides some pretty nefarious pinchers. Tara, displaced and desperate, happens upon Sam, lost and lonely. It’s a perfect match and dangerous combination all at once. Both are running from something that pains them, slowly contributing to a steady attachment and dependency that acts like a slow-burning time bomb.

As their moods change on a dime, Tara’s paranoia manifests, and Sam’s uncertainty causes doubt, the pair’s relationship begins to complicate the narrative as the plot unfolds. The progression of an all-encompassing love from honeymoon euphoria to needy distress to a haunted bond gives Tentacles a true weight with blossoming authenticity. Exposing the complexities and appeal of identity, agency, and connection, the film takes learning about a lover to an interesting level of horror that is relatable and universal.

“Replacing hearts and flowers with limbs and leeches, Tentacles puts love and body horror in a firm embrace and squeezes tight.”

As those limbs squeeze tightly around a solid illustration of a relationship gone awry, Tentacles proves to approach cinematic understanding as well. Clara Aranovich utilizes a variety of storytelling techniques to add depth and texture to this film, limited in cast and setting. There are lots of voiceover and fast montage scenes to add layers of time, suggesting longevity and presence to their small bubble of passion. The uncomfortable close-ups, wandering camera, and flowing angles speak to Tara and Sam’s dizzying closeness and wanton dynamic.

At times, the writing is a bit clunky, particularly with some of the dialogue teetering between transparent and withholding. Where it falls short in that aspect, Dana Drori and Casey Deidrick put their all into some demanding performances especially Drori who adapts her body to the character’s strangely evolving state. The episode does well to keep its pace fresh and in motion, however it seems to be wanting for more once the narrative introduces more nefarious subject matter. Tentacles seems to lean into some fascinating material and successfully conveys it in many ways, however in other areas it slightly lacks cinematically. Regardless, Tentacles dares to tempt, explore, and push boundaries which earns it more than one leg in the Into The Dark universe.

Our Body Is Incredible

In one of its more noticeable attributes, Tentacles showcases an impressive display in erotic horror. Tara and Sam begin an impassioned affair right from the start, indulging in one another mentally and physically. The Into The Dark anthology series has returned a variety of narratives and artistic expressions from a range of filmmakers, each taking a holiday and churning the theme to push the limits of comfort and normalcy. Tentacles tackles the sexual components of one couple’s relationship, physically and emotionally. Their hot and heavy kismet gives this episode of Into The Dark a more mature and poignant layer with racy scenes and visual exposure.

Tentacles does not shy away from showing the physicality between Tara and Sam, but it also makes their bodily connection a focal point with raw and organic effect. Nothing is gratuitous or exploitative about what is shown on screen, which makes the episode that much more sexy, intriguing, and exciting.

“Tentacles’ portrayal of sexuality is an extremely unique exercise in intimacy and an interesting vehicle for the episode’s body horror aspects.“

Rather than using the general act of sex as a touchstone to make the seriousness of Tara and Sam’s relationship, Tentacles delves into copulation, as it stems from intimacy. The sexual and mental isolation that accompanies the thrilling rush of newfound love embraces infatuation in this intimate portrait of identity. The chemistry between Sam and Tara is fast and natural, however their reluctance to really see one another through the veil of attraction is what gives the episode an unspoken note of mystery. Their passionate coupling smartly represents the polarizing nature of a consuming affair, bringing out the notion of sex versus a relationship.

As the narrative treads dark waters, the sexual hubris turns on itself and becomes a mechanism for exploring Tara’s fluid sexuality as a character and her tactic of absorbing her current lover before moving to the next. Tentacles’ portrayal of sexuality is an extremely unique exercise in intimacy and an interesting vehicle for the episode’s body horror aspects.

Who Are You? What Are You?

The Into The Dark series has seen its fair share of guts and gore, but it has yet to see an episode dedicated to body horror themes. Tentacles takes its romantic foray on a detour that happens to reflect a deep, dark duplicity. Beginning and ending with Tara’s distinctive abdominal scar, the body serves as a prime mode of pleasure, unity, and terror.

Body horror is played on as a source of both attraction and attachment as well as detraction and disgust while the narratives slowly peels back its skin to reveal Tara’s true being and motives. Though it never really breaches the line between gross-out and gory, Tentacles delivers on a cosmic application of transformation and subsuming. Aranovich, along with writers Alexandra Peckham and Nick Antosca, have certainly grasped the concept of body horror in the genre and have incorporated a relevant, balanced nuance to the visual thrills that viewers crave. Tentacles has that fresh feel to it, hinting at the potential of all involved parties to continue bringing expressive layers to physical horror.

“Though it never really breaches the line between gross-out and gory, Tentacles delivers on a cosmic application of transformation and subsuming.”

One of Tentacles’ strongest qualities is the mounting tension that occurs both between the characters romantically as individuals and the changes their bodies undergo as individuals. Come the finale, the two are cleverly almost one in the same. Sam’s bloody ear turns into a debilitating health issue as Tara seems to transform in a weird way, giving the episode its titular name. Tentacles does take a minute to get warmed up, placing emphasis on the developing bond between Tara and Sam. When the dial is turned up in matters of body horror, the brutality is relatively tame but does not relent.

Relying on much of what is not shown to viewers, the visual effects of the episode are somewhat limited and simple for the most part. However, that does not mean they are not effective. The hidden elements create an obscure hint of terror masked by well done shadowing and crafty CGI work. The episode could have easily fallen apart with hokey graphics and over-the-top aesthetics, however Tentacles keeps the body horror minimal and realistic for an optimum grab.

Tentacles has resumed the long awaited return of the Into The Dark anthology. As it wraps its limbs around your hearts this Valentine’s Day, be sure to keep your eyes and ears open for more to come… assuming they’re all still attached. Tentacles will be streaming on Hulu Friday, February 12th, 2021.

Are you excited for the return of Hulu and Blumhouse’s Into The Dark anthology series? What do you think of February’s sweet and slithery episode, Tentacles? What did you think about the episode’s body horror? Let us know your thoughts over on Twitter, Reddit, or in the Horror Movie Fiend Club on Facebook! 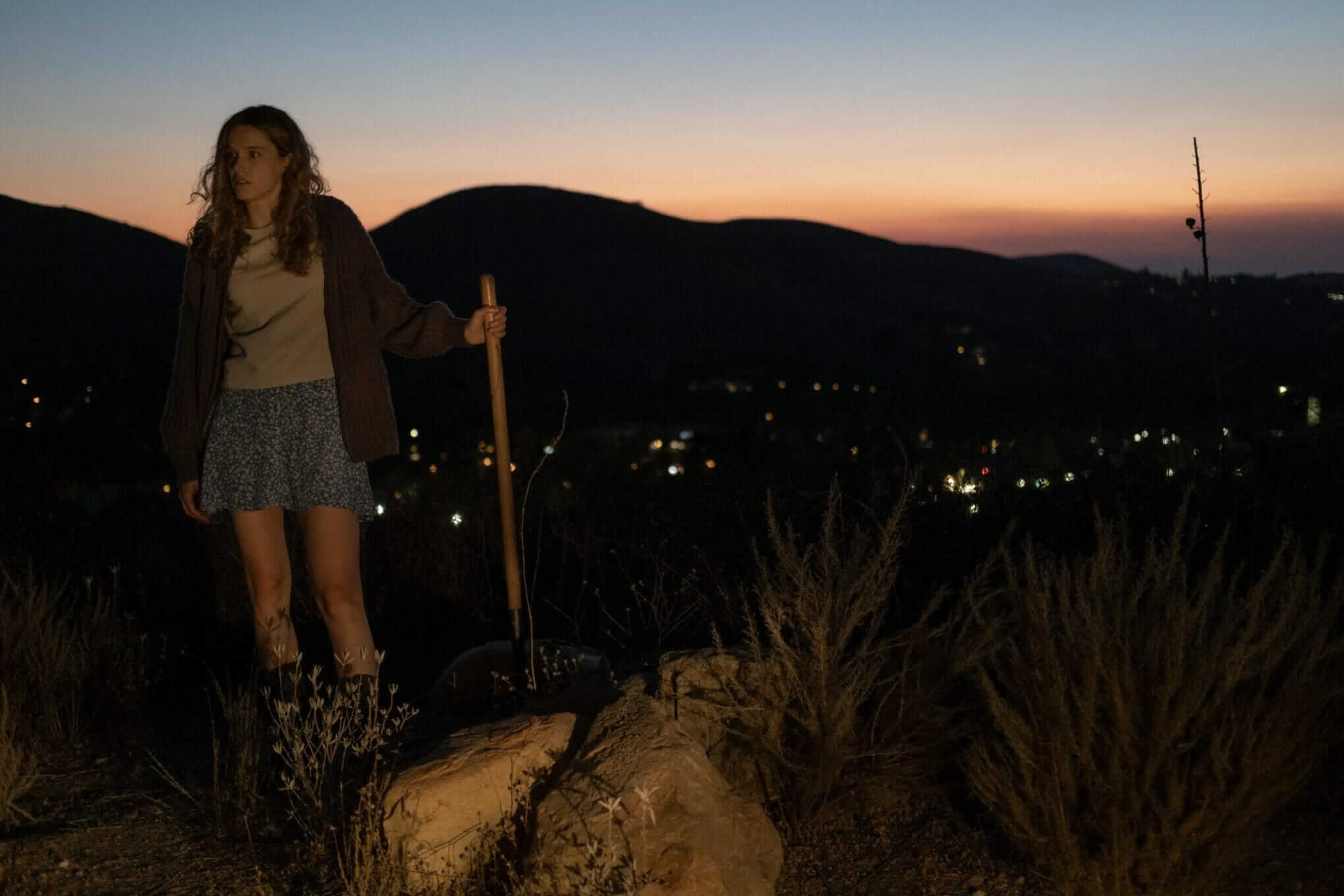 TLDR Tentacles does take a minute to get warmed up though, placing emphasis on the developing bond between Tara and Sam. When the dial is turned up in matters of body horror, the brutality is relatively tame but does not relent. The episode could have easily fallen apart with hokey graphics and over-the-top aesthetics, however Tentacles keeps the body horror minimal and realistic for an optimum grab.