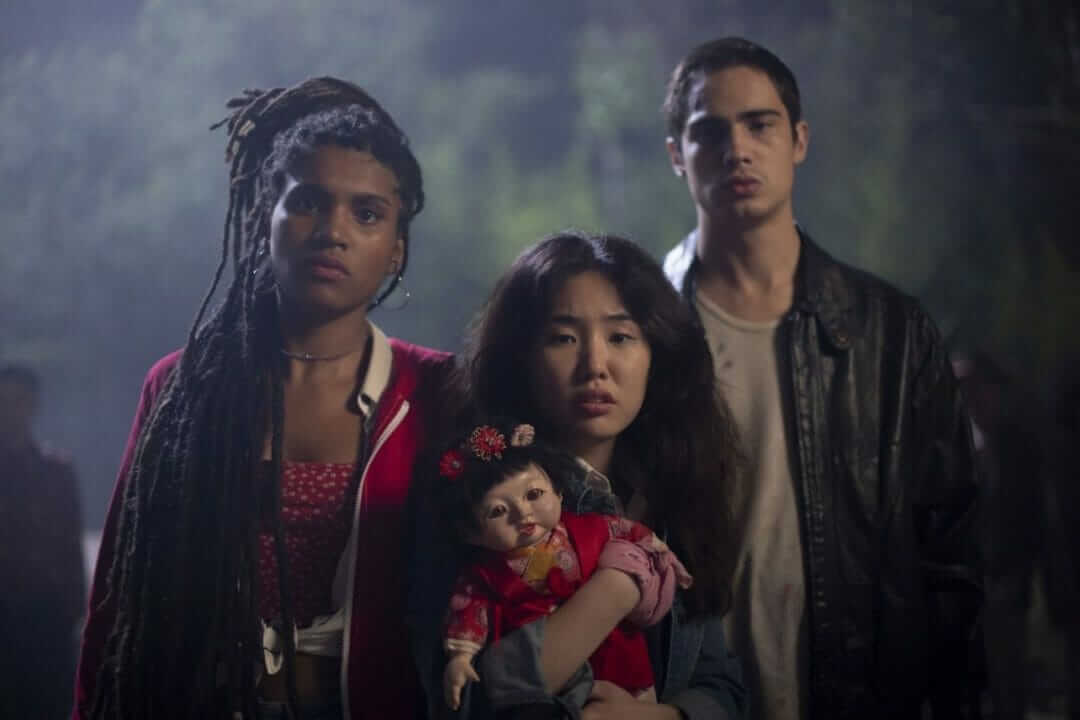 Hungry for a spooky series to binge? This past weekend Netflix released the international series Spectros (2020), a TV-MA Brazilian ghost story set in the Liberdade neighborhood of São Paulo. From writer/director/creator Douglas Petrie comes this spooky story centered around three teens. Pardal (Danilo Mesquita), a young, street-tough yet troubled boy, Mila (Cláudia Okuno), the overachieving perfectionist, and Mila’s former best friend Carla (Mariana Sena) are brought together to stop a powerful necromancer from resurrecting an army of the dead. With some help from a 100-year-old witch (Miwa Yanagizawa), Mila’s father (Carlos Takeshi), Pardal’s younger brother (Enzo Barone), and the local drug dealer (Drop Dashi), the teenagers just might have what it takes to stop a ghostly horde that threatens the city and live as they know it.

Spectros begins in a police station with the three leads being interrogated separately as to the whereabouts of a stolen car and their involvement in the murder of a man found burned to death. When asked by the police how long ago the three of them met, they reply, ”Like, yesterday”. Flashback to “Like, yesterday.” – It feels important to note here the first use of comedy, which the series employs sporadically and it is, in kind, sporadically successful. From there, the first several episodes of Spectros play out as a combination of flashbacks as recounted police, and present situations in the police station. While I’m normally a fan of fractured storytelling, the back and forth in these early episodes only muddies an already fairly confusing storyline. Especially if, like me, you’re unfamiliar with Japanese folklore. I kept having to pause and retrace the plot because, much like the police officers, I could not parse the weaving storyline. The show eventually provides more context for its mythology, yet I still found myself wanting to know more.

The backstory felt just a little too superficial instead of actually establishing a world were ghosts really exist. That being said, the show finds its stride with each additional episode, particularly once it abandons the flashback structure. I was honestly thrilled when I found myself surprised by some of the twists and turns the show takes, as I’d pegged about 75% of it down as predictable. That other 25% is what kept me intrigued and not daring to budge as Netflix automatically played each next episode. With no real scares, a total underutilization of the show’s only remotely scary characters/ghouls, and an almost complete lack of gore, Spectros comes across as more of a supernatural leaning dramedy than a horror show. That’s not a knock, just a disclaimer. Also, this may just be my personal preference, but ghosts should not move like zombies. Especially when there are other ghostly characters who move in a more classic ghost way. The effects were effective but kept to a minimum. The dialogue could be clunky and basic, but I found myself forgiving this as something lost in translation through the dubbing. The characters all tend to be rather archetypal, with dialogue that was lost in translation through dubbing, but I found myself rooting for the team regardless.

All in all, Spectros is enjoyable despite its ups and downs. It presented a unique story that repeatedly established itself as engaging, if far from perfect. I can only hope that if they get picked up for a second season, they will delve more into the specific Japanese mythology at the heart of the story. I think it might have been even more successful as a horror series had it leaned more into the scares and taken the time to make the ghosts frightening. I definitely say check it out and let us know what you think over on Twitter, Reddit, and on Facebook in the Horror Movie Fiend Club! TLDR All in all, Spectros is enjoyable despite its ups and downs. It presented a unique story that repeatedly established itself as engaging, if far from perfect. I can only hope that if they get picked up for a second season, they will delve more into the specific Japanese mythology at the heart of the story. I think it might have been even more successful as a horror series had it leaned more into the scares and taken the time to make the ghosts frightening. I definitely say check it out and let us know what you think!