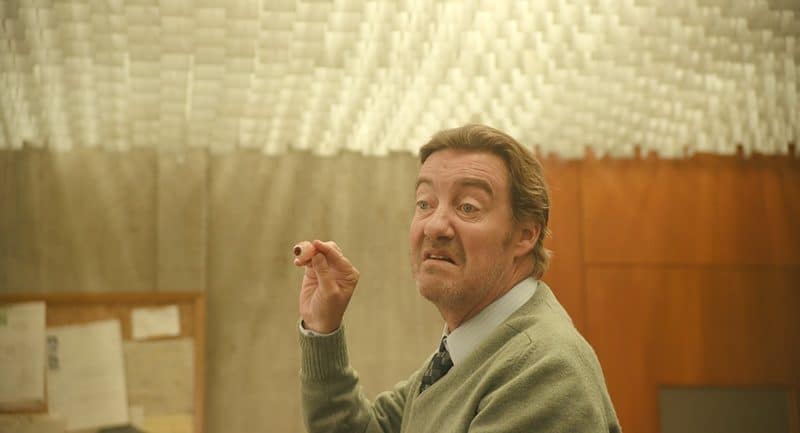 Quentin Dupieux’s movies are a f*cking journey. His films defy not only genre but also the medium itself, taking unexpected turns at the drop of a hat while somehow also deconstructing what a movie can and can’t do in real-time. His latest feature Keep An Eye Out (Au Poste!) is a bizarre story about a man stuck in a police station for interrogation after discovering a very fresh corpse. It’s easily one of his more approachable films but don’t think for a second you won’t be staring at the screen in wide-eyed disbelief at its charming, cartoonish nature.

Trying to define a Dupieux film is very hard. Heck, trying to explain his movies is even harder. His previous features have included stories about a sentient tire on a killing spree (Rubber), a man on an existential journey to find his lost dog (Wrong), and an amateur filmmaker hunting for the world’s best groan in what might be another person’s dream (Reality)- but that’s all just the tip of the iceberg. Even as you’re reading this right now, he has two other films yet to be released that have been burning up the festival circuit for the last few years. One is about a man obsessed with deerskin (Deerskin), and the other is about two loveable idiots that find a giant fly hidden in the trunk of a stolen car (Mandibles). His movies are undeniably unique, frequently brilliant, but always unmistakably his own. 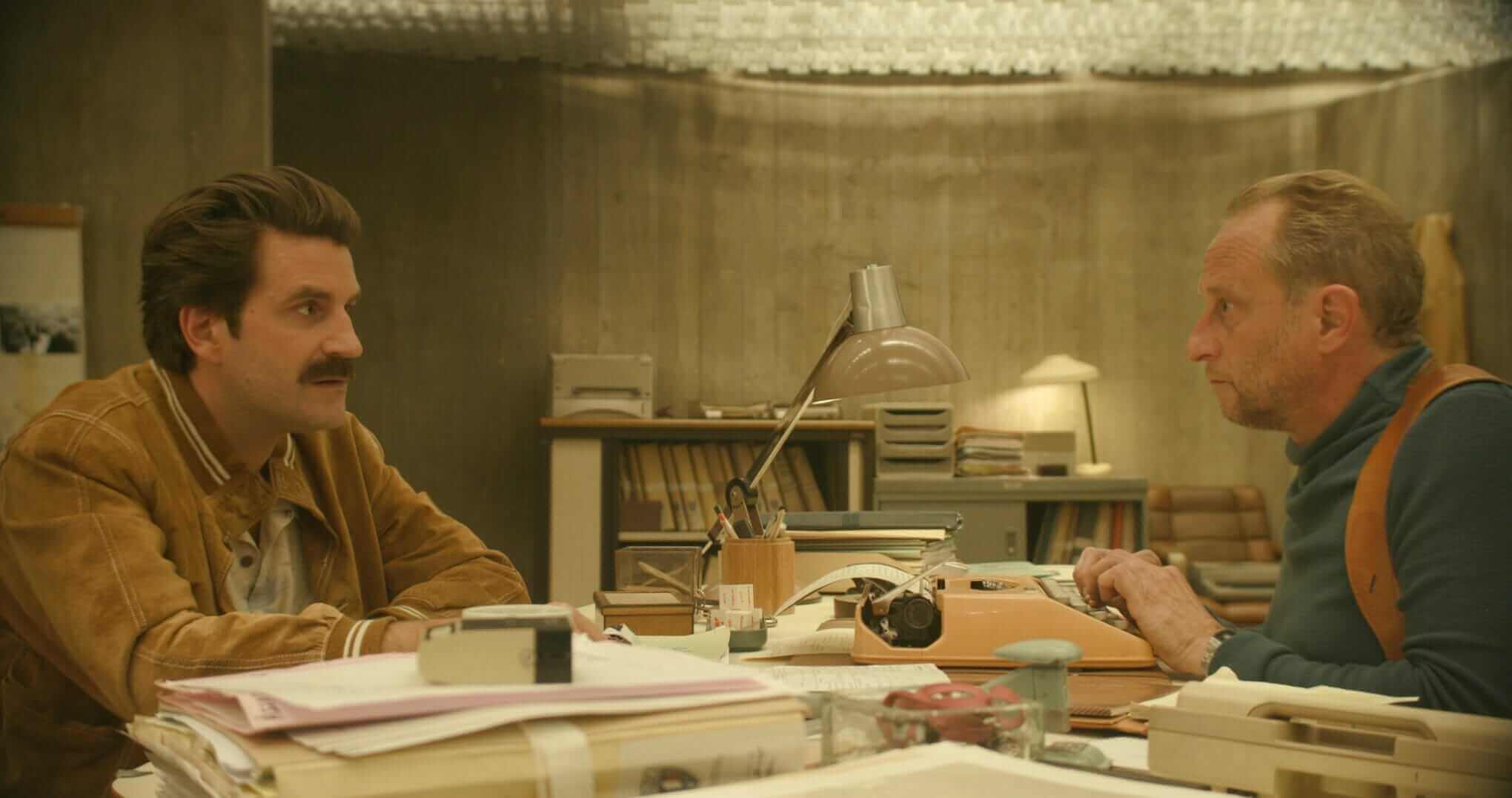 Benoît Poelvoorde (who genre fans will no doubt recognize as the sadistic psychopath in Man Bites Dog) stars as Commissaire Buron, charged with getting to the bottom of a strange story involving a dead body and a suspicious witness. The suspect, Louis Fugain (played by French humorist Grégoire Ludig) claims to have just discovered the body while going outside for some air but Commissaire Buron isn’t buying it and he’s determined to get to the bottom of the case. There’s also the matter of a one-eyed man that suddenly goes missing in the police station, but that’s just one small item on the laundry list of oddities in this 1970’s police procedural farce from the warped mind of writer/director Quentin Dupieux.

The interrogation process becomes complicated as we discover that Louis does, in fact, have something to hide and other characters from the film begin to make surprise appearances in his flashbacks. “Surprise” appearances because there were never there with him throughout the night and yet they appear in his memories as though they are astral projecting directly into him. And as is the case in all of his previous films, that brief description is only scratching the surface of the surrealist absurdity at the heart of this insane investigation into the complicated realities of personal experience. 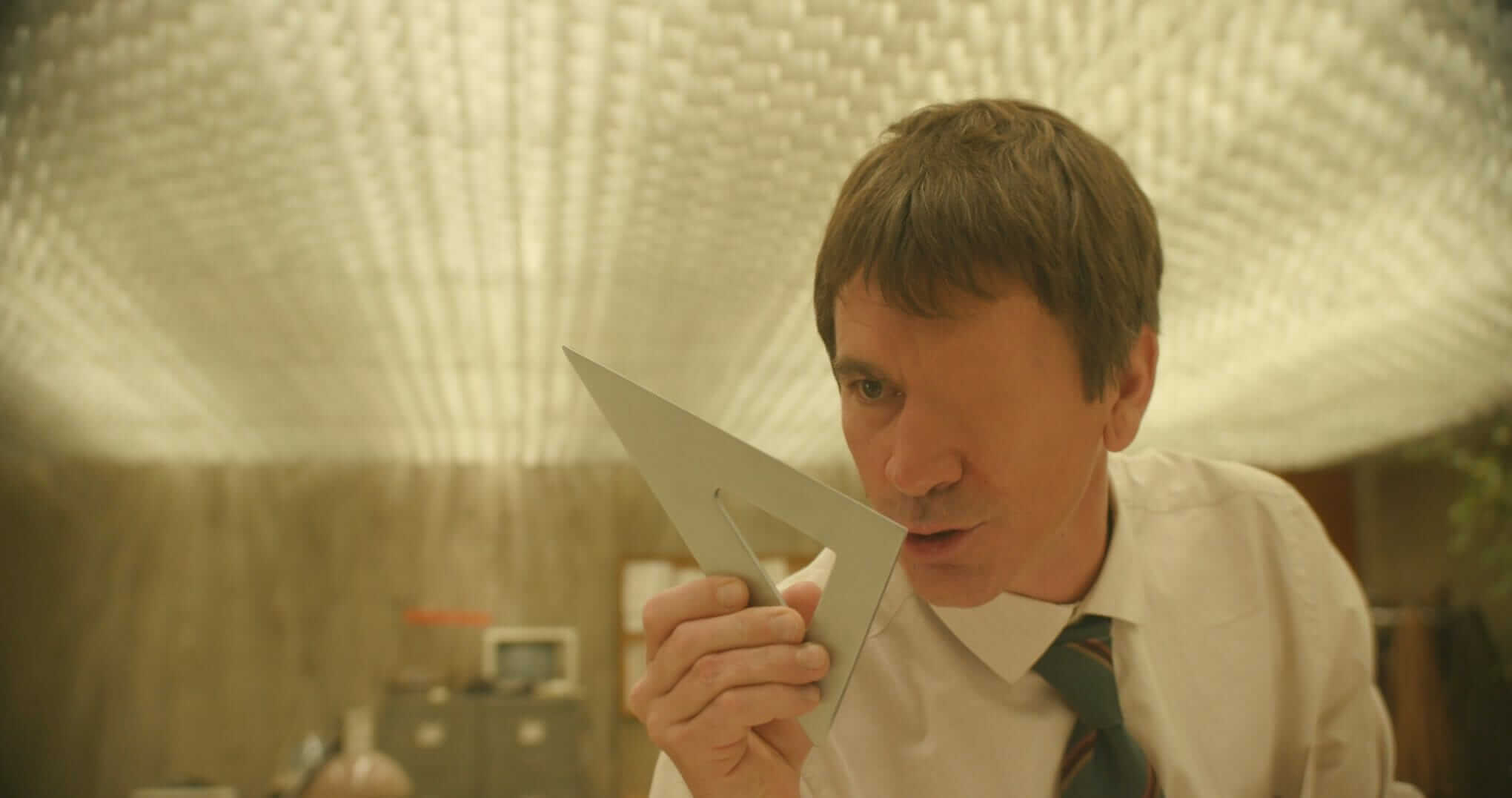 The world of Keep An Eye Out (really all of Dupieux’s films) is bizarre in a way that you tend to only see in dreams. Strange, unimaginable things are happening all around but the characters react to them as though it’s perfectly normal. You’re forced to just accept what you are seeing and treat it as fact. There is no explanation given for even the most mundane of its eccentricities. You’ve got to either embrace its weirdness or GTFO. Don’t get me wrong, there are no rubber tires hunting people down in the street or dogs disappearing in the hallways of your boyfriend’s parent’s time-traveling house (Hello, I’m Thinking Of Ending Things, you needlessly bizarre movie you), but if run-of-the-mill stories are like a rock-climbing wall that you can easily grab onto, Quentin Dupieux’s films are a slippery surface with no discernable path toward reaching the finish line.

Wonderfully weird, and endless eye-popping, Keep An Eye Out is a late-night cup of coffee spiked with mild hallucinogens. It also features a fascinating rug-pull in the 3rd act (that I would love to talk about in great detail with anyone who would care to join me for spoiler-filled discussion in the Nightmare on Film Street Discord) but it’s not just its outlandish qualities that make this movie worthwhile. Acting as his own cinematographer, Dupieux has an uncanny ability to always put his camera in the most interesting place for any given scene. Sometimes it’s to conceal a subtle but genius-level gag, sometimes it just to highlight Alexandrine Mauvezin-Bosque’s 70s-tastic set design, but most often it’s used to showcase the incredible talent of Poelvoorde and Ludig. Keep An Eye Out is as wild and off-the-rails as any of his previous work but it’s also maybe the only movie of his that you could watch with your dad…even if it has him shouting “What the heck is going on?!??” at you the whole time.

“Wonderfully weird, and endless eye-popping, Keep An Eye Out is a late-night cup of coffee spiked with mild hallucinogens.”

Quentin Dupieux’s Keep An Eye Out premieres in select theatres and virtual cinemas across the United States on March 5th. Let us know what you thought of this bizarre comedy over on Twitter, Reddit, and in the Horror Movie Fiend Club on Facebook. Not a social media fan? Get more horror delivered straight to your inbox by joining the Neighbourhood Watch Newsletter. 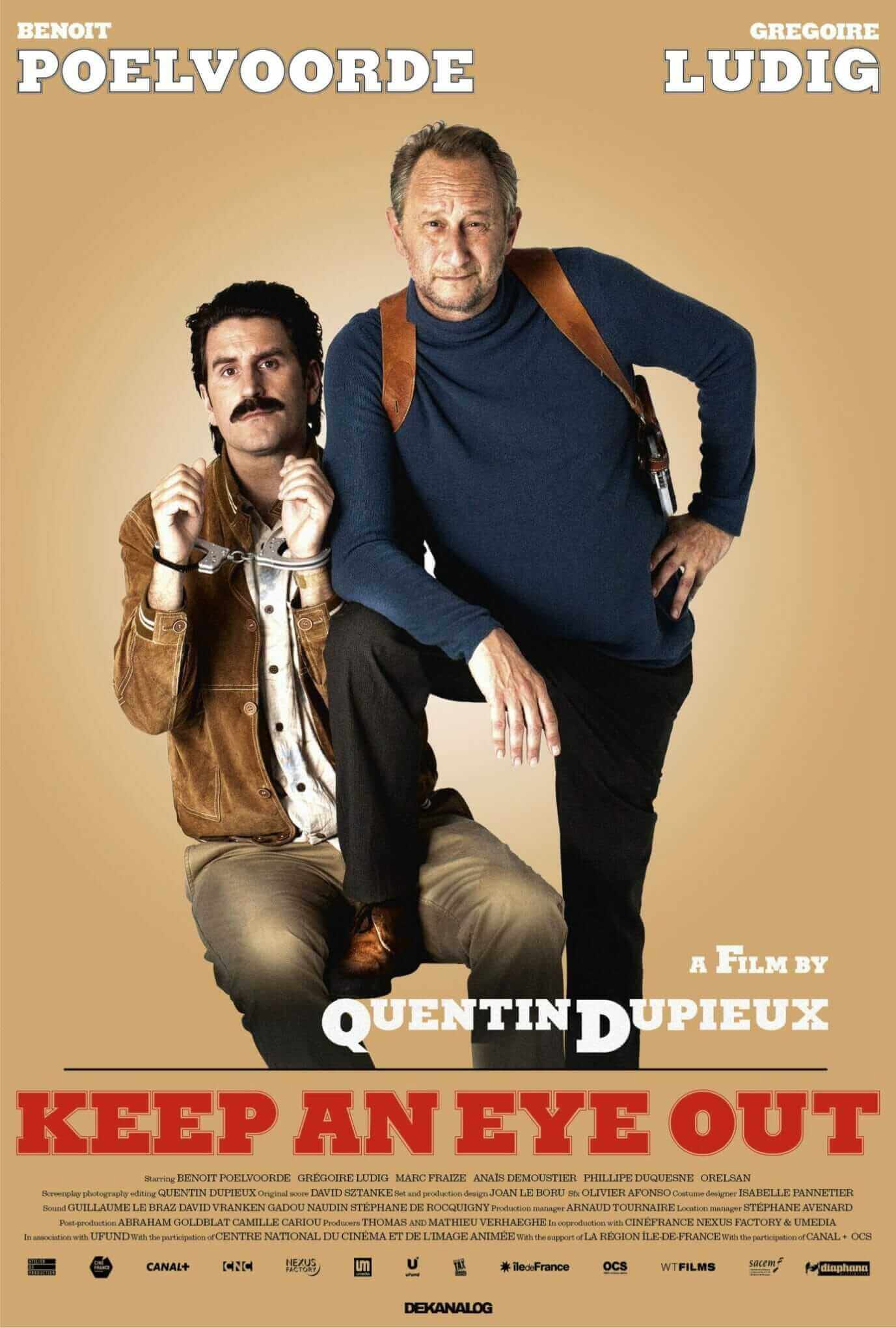 TLDR Quentin Dupieux's movies are a f*cking journey. His movies are undeniably unique, frequently brilliant, but always unmistakably his own. Wonderfully weird, and endless eye-popping, Keep An Eye Out is a late-night cup of coffee spiked with mild hallucinogens. It's as wild and off-the-rails as any of his previous work but it's also maybe the only movie of his that you could watch with your dad...even if it has him shouting "What the heck is going on?!??" at you the whole time.