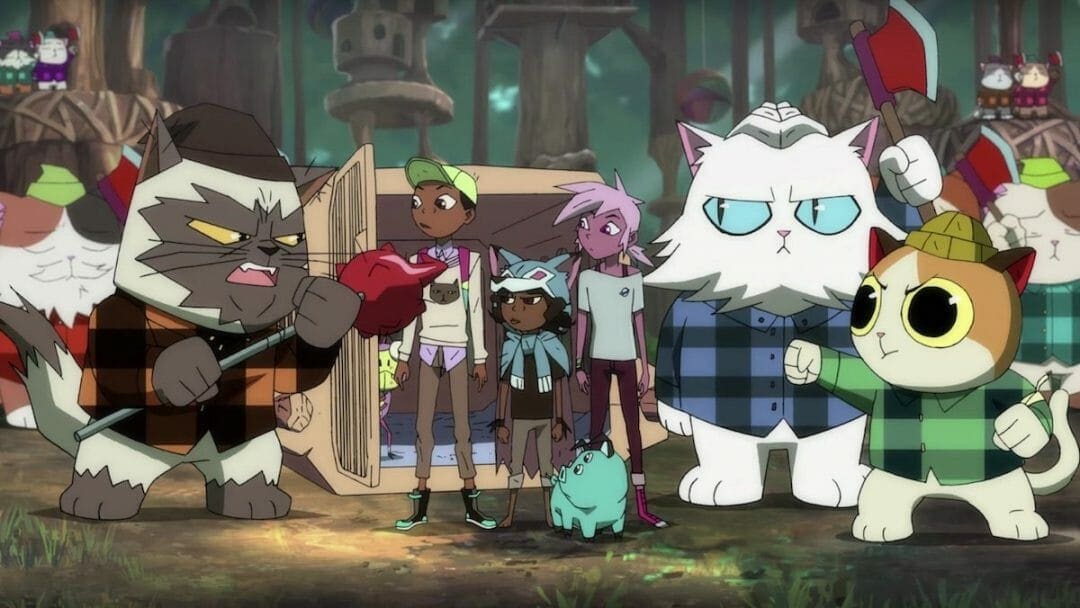 With a tagline like “Where everything trying to kill you is downright adorable,” parents might be scratching their heads on whether DreamWorks’ latest animated series would be appropriate for kids. Kipo and the Age of the Wonderbeasts is an exciting and vibrant adventure into a dangerous world. The Netflix exclusive series is based on the 2015 webcomic created by Radford Sechrist, who has worked as a storyboard artist on other DreamWorks projects like Kung Fu Panda 2 and How To Train Your Dragon 2, and was developed for television by Bill Wolkoff, who was written for Once Upon a Time and Star Wars Rebels.

Roughly 200 years in the future, humans are forced to live in underground cities due to the animal kingdom becoming mutants— “mutes” for short. Some species have developed intelligence and particular interests; frogs become mods, cats become lumberjacks, and snakes become metalheads. Other species, however, have grown to terrifying kaiju sizes—known as “mega mutes,” and often have an extra pair of eyes or limbs.

“…an exciting and vibrant adventure into a dangerous world.”

When her burrow is attacked and destroyed by a mega mute, twelve-year-old Kipo (voiced by Karen Fukuhara, The Boys) escapes, winding up on the surface world for the first time in her life, all alone. But it turns out Kipo isn’t the only human living up on the surface. She befriends Wolf (Sydney Mikayla, School of Rock TV series), a young girl raised by wolves who has managed to survive on her own by abiding by her own set of rules. The two of them also meet Benson (Coy Stewart, Agents of S.H.I.E.L.D.), a hip-hop head who has survived with help from his best friend Dave (Deon Cole, Black-ish), a bug mute who is constantly cycling through different stages of life—babyhood, awkward teenage phase, adulthood, old age, and back to babyhood. Together, along with Mandu— a pig with four eyes, six legs, and the personality of a lapdog— they will accompany Kipo on her journey to reunite with her dad and the rest of her colony, by navigating through the ruins of human cities and avoiding near death at the hands of various mutes.

Like Skeletor in He-Man and The Masters of the Universe or Aku in Samurai Jack, a good series needs a great villain. Enter Scarlemagne (Dan Stevens, Legion TV series), a maniacal yet fashionable mandrill who wants to mind control humans to be his servants as revenge for the centuries humans have spent mistreating animals. It’s one of those cases where the viewer can somewhat relate to the villain’s motivation, yet doesn’t agree with their malicious methods. With so many dystopias and post-apocalyptic scenarios being brought about by heartless dictators or technology taking over, a future where nature has reclaimed dominion is almost comforting, especially when we’re bombarded with news about ecological destruction. The animation style and character design in Kipo and the Age of Wonderbeasts is largely inspired by Japanese anime, and borrows a lot of anime’s post-apocalyptic themes, like ruined cityscapes, orphaned children, and mutants, which grew from the lingering trauma of the atomic bombings of Hiroshima and Nagasaki. Kipo and the Age of Wonderbeasts also falls into the category of “isekai,” a fantasy subgenre in manga and anime, in which the main character is transported to an unfamiliar parallel world. Though a lot of the themes might come off as dark on paper, the danger is handled with a light tone. There might be a few times when your kid will bury their face in a pillow, for example when Kipo and company are hunted by wolves or chased by giant bunnies. But those scary moments are diluted with a fun bumping score, and are often followed by a sweet, heart-warming moment. Still, the action scenes themselves are superbly animated and adrenaline-pumping for both kids and adults.

The music in this series deserves a mention. The soundtrack is mostly upbeat hip-hop, courtesy of Benson. But each mute gang has their own proper genre of music based on their shared interests; the Umlaut Snakes are really into heavy metal, whereas the Timbercats are more into bluegrass and country. One of the greatest moments is when the leader of the Newton Wolves (voiced by GZA of the Wu-Tang Clan) raps about astronomy. The music supervisor Kier Lehman has worked on other memorable soundtracks like Spider-Man: Into the Spider-Verse and Brigsby Bear. Almost every episode features the characters performing an original song, written and composed by Daniel Rojas, who has also composed music for the first season of True Nightmares.

“Believe the hype about this show. It’s unlike anything you’ve ever seen before.”

In terms of representation, Kipo and the Age of Wonderbeasts is ground-breaking. The main characters are all people of color (and voiced by people of color) and the two female characters are smart and brave. Kipo is intelligent and has a passion for science, though she’s also caring and supportive, and has a soft-spot for cute animals. Wolf, on the other hand, is tough-as-nails and is fiercely self-reliant, almost to a fault. In one episode, one character even comes out as gay (I’m not going to say who). The exchange only lasts a few seconds, but it has been making waves on the internet, and is being commended as a first for an all-ages animation. There have been complaints that all of this is deliberate shoe-horning, but for decades, there have been so many cartoons and children’s shows with white straight male leads, so I find the inclusion of such diverse characters very necessary, and the creators should be applauded for this.

The editors of NOFS were a bit hesitant on letting me review Kipo and the Age of Wonderbeasts. Although I wouldn’t categorize the series as “horror,” I still think it falls into the realm of “genre,” either as science-fiction, fantasy or action-adventure. I was just so damn excited for this show and simply wanted to rave about it from whatever platform I could climb up on. Believe the hype about this show. It’s unlike anything you’ve ever seen before. I recommend parents watch this side-by-side with their kids, not only because they’ll enjoy story, but they’ll also appreciate the stunning visuals and the beautiful color palette. There’s something for everyone in this, no matter what age. I personally can’t wait for season two. Review: KIPO AND THE AGE OF WONDERBEASTS (2020)

TLDR Although I wouldn’t categorize the series as “horror,” I still think it falls into the realm of “genre,” either as science-fiction, fantasy or action-adventure. I was just so damn excited for this show and simply wanted to rave about it from whatever platform I could climb up on. Believe the hype about this show. It’s unlike anything you’ve ever seen before. I recommend parents watch this side-by-side with their kids, not only because they’ll enjoy story, but they’ll also appreciate the stunning visuals and the beautiful color palette.