These days, it’s not a good sign when a movie or television show isn’t screened for critics ahead of time. We can only assume the worst. On the other hand, in avoiding the potential panning, the general public can remain impartial. But is this the case for Netflix’s latest supernatural drama The Order? Did it bypass the critics so it could receive a fair chance, or should I stick with my gut instinct?

The influence of Harry Potter has long changed how the media treats magic: it’s something that anyone can learn. A common trope in film and television nowadays is to have students attend schools where they learn about their “gifts.” Sometimes they’ll alter the formula a bit (Sky High, Vampire Academy, Deadly Class), but the groundwork stays the same: an outsider or novice enters a world where they’re allowed to hone their preternatural abilities. In due time, they’ll find themselves fighting some opposing force that even experienced characters cannot defeat.

The Order starts off familiarly: college freshman Jack Morton (Jake Manley) finds his way into a fabled society on campus called The Hermetic Order of the Blue Rose, or The Order for short. As it turns out, the members aren’t there only for networking; they’re practitioners of the dark arts. Jack then begins a journey where he must play double agent. For The Order has a sworn enemy: a tight-knit group of werewolves—the Knights of Saint Christopher—who have taken Jack under their fangs. When the time comes, though, exactly whose side will Jack take?

Our protagonist Jack is brand-new to the world of magic, but not because he innocently fell into it, or he’s answering a calling. He and his grandfather (Matt Frewer) have conceived a plan to avenge Jack‘s late mother. This involves Jack enrolling at Belgrave University where his estranged father Edward Coventry (Max Martini) is a professor. They blame Edward for Jack‘s mother’s death, and the best way to reach him is to find The Order. Once enrolled at Belgrave, Jack hunts for any clues that will lead him to The Order. This spurs a chance encounter with fellow student and potential love interest Alyssa Drake (Sarah Grey), someone who clearly knows more than she’s letting on.

Jack has no idea The Order is involved in magic and neither does his grandfather. This doesn’t deter them from their mission, but it does make Jack wary of his pledging the secret society. The fact that someone—or something—is killing Order pledges doesn’t quell his uneasiness either.

By the end of the first episode, we learn that wizards aren’t the only supernatural beings on campus. Jack stumbles upon a werewolf, who’s revealed to be one of his new friends Randall (Adam DiMarco). To make matters more complicated for Jack, he’s turned into a werewolf against his will. This throws him directly into a war between The Order and the lycans. 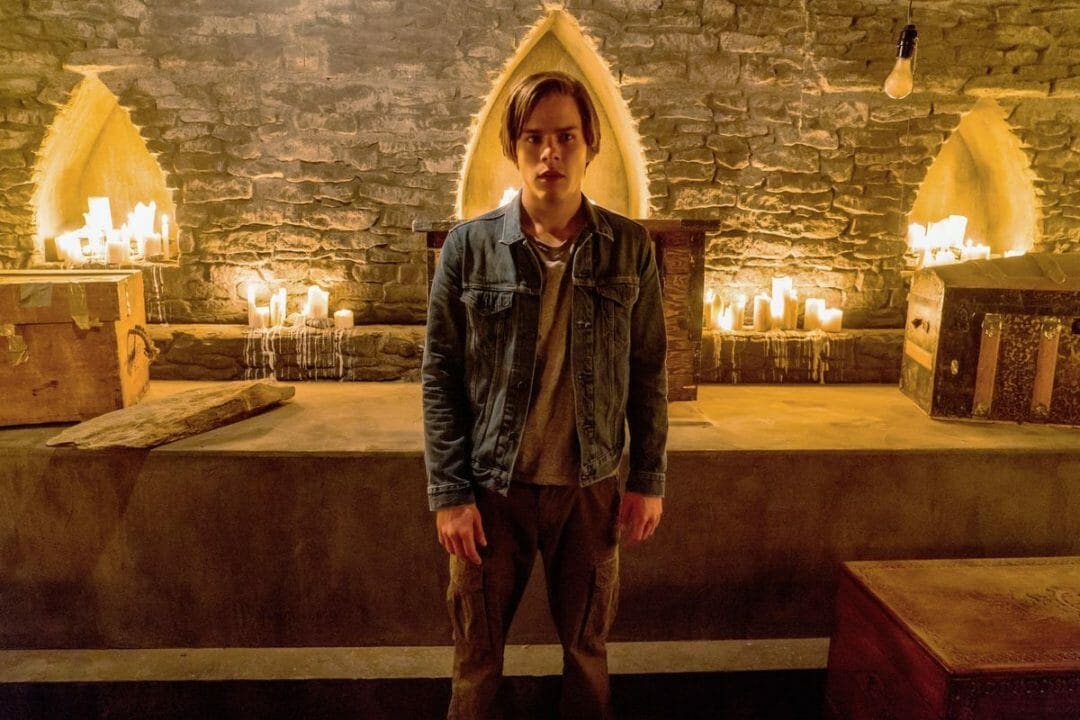 My first impression of this show was that it was going to be an aping of The Magicians, which is already a series many people would describe as Harry Potter for adults. Yet based on the first few episodes, I got more of a Teen Wolf vibe. Throw in a dash of The Vampire Diaries and voilà—we’ve got The Order. Things were not looking too creative at this point, but I was willing to further explore the going-ons at Belgrave.

Early into the first season, I notice the writers took full advantage of their license to F-bomb it up. This becomes cringey as it seems unnatural. It definitely comes off as, “Hey, The Order‘s not like a regular supernatural teen show. It’s a cool show.” In other regards (sex and violence), the series is comparatively as tame as anything you’ve seen in a CW drama. If they wanted to be provocative, I’d prefer if they went all in rather than halfheartedly.

Around the fourth episode is when we see Jack and his peers fully easing into their roles. While the plot remains middling at best, a number of scenes are saved by zesty characterizations and pithy personalities. Some selective developments down the road are attention-grabbing, though.

The core of the show’s cast is young and fairly unknown, but they shine the brightest. They come off as more confident than a lot of the older actors, several of whom are virtually veterans in Canadian genre television (and spot Ginger Snaps and American Mary starlet Katharine Isabelle among the faculty). The warp speed romance between Jack and Alyssa is standard—will they or won’t they; and once they do get together, they then can’t be together because they’re on two different sides—but Jake Manley and Sarah Grey are endearing as well as committed to their designations as ostensibly star-crossed lovers.

“..Jake Manley and Sarah Grey are endearing as well as committed to their designations as ostensibly star-crossed lovers.”

The werewolves are amusing in each of their own rights: Randall is charmingly unconcerned about everything most of the time, Hamish (Thomas Elms) is vague and likes his liqueurs a bit too much, and Lilith (Devery Jacobs) is on the verge of violence so often that it’s a running gag. In hindsight, the best part of every episode is when Jack gets together with the three wolfy Knights. They bring out the best and worst in each other, and their interactions both on and off the battlefield are entertaining to watch.

Where The Order suffers the most is its story. Initially, the overarching plot of the show is divulged at a slow pace. It feels more meandering than deliberate. They drag out the animosity between the series’ namesake and the Knights instead of giving us more of an idea of what’s in store for our heroes. As the finale nears, however, you become more forgiving of the shortcuts taken to speed along the bonds of friendship and love among the main characters. Jack and his pals appear more solid at least, and their fellowship eclipses the meager story.

In the end, the series does a disservice to itself by employing clichés at the beginning. In toning the banality down and focusing on the characters and main thread, The Order is able to evolve into a marginally better show. Unfortunately, those with less patience probably skedaddled before the halfway point.

Making all of The Order readily available for bingeing was a good choice. It would not have fared well as a week-to-weeker on a traditional network. The plots are unmemorable, and there’s not too much here that’ll draw you back once you’re done. That’s not to say it’s terrible. It really isn’t. You simply have to be implored to watch it. And if the first couple episodes don’t conjure much interest, the show is likely not for you. As for myself, it defied my expectations to a certain degree. I’d even give the second season a watch in the event Netflix renews the series. I’m just not bewitched enough to do so immediately.

The entire first season of The Order is streaming on Netflix right now. Share your opinions with the Nightmare on Film Street community on Twitter, our Official Subreddit, or the Fiend Club Facebook Group! TLDR While the plot remains middling at best, a number of scenes are saved by zesty characterizations and pithy personalities. The core of the show's cast is young and fairly unknown, but they shine the brightest. They come off as more confident than a lot of the older actors, several of whom are virtually veterans in Canadian genre television. In toning the banality down and focusing on the characters and main thread, The Order is able to evolve into a marginally better show.