We all know Mads Mikkelsen is a badass. Stoic, debonair, and composed —yes, but still a stone-cold badass. That’s why I lept at the premise of Riders of Justice; Mads plays a man who goes full rogue vigilante out for revenge after the suspicious death of his wife. Guns —both the bulgy bicep and pow! pow! kind, quirky alliances, and intense action sequences aplenty. If there’s any actor who deserves the John Wick treatment as much as Keanu, it’s our boy Mads. 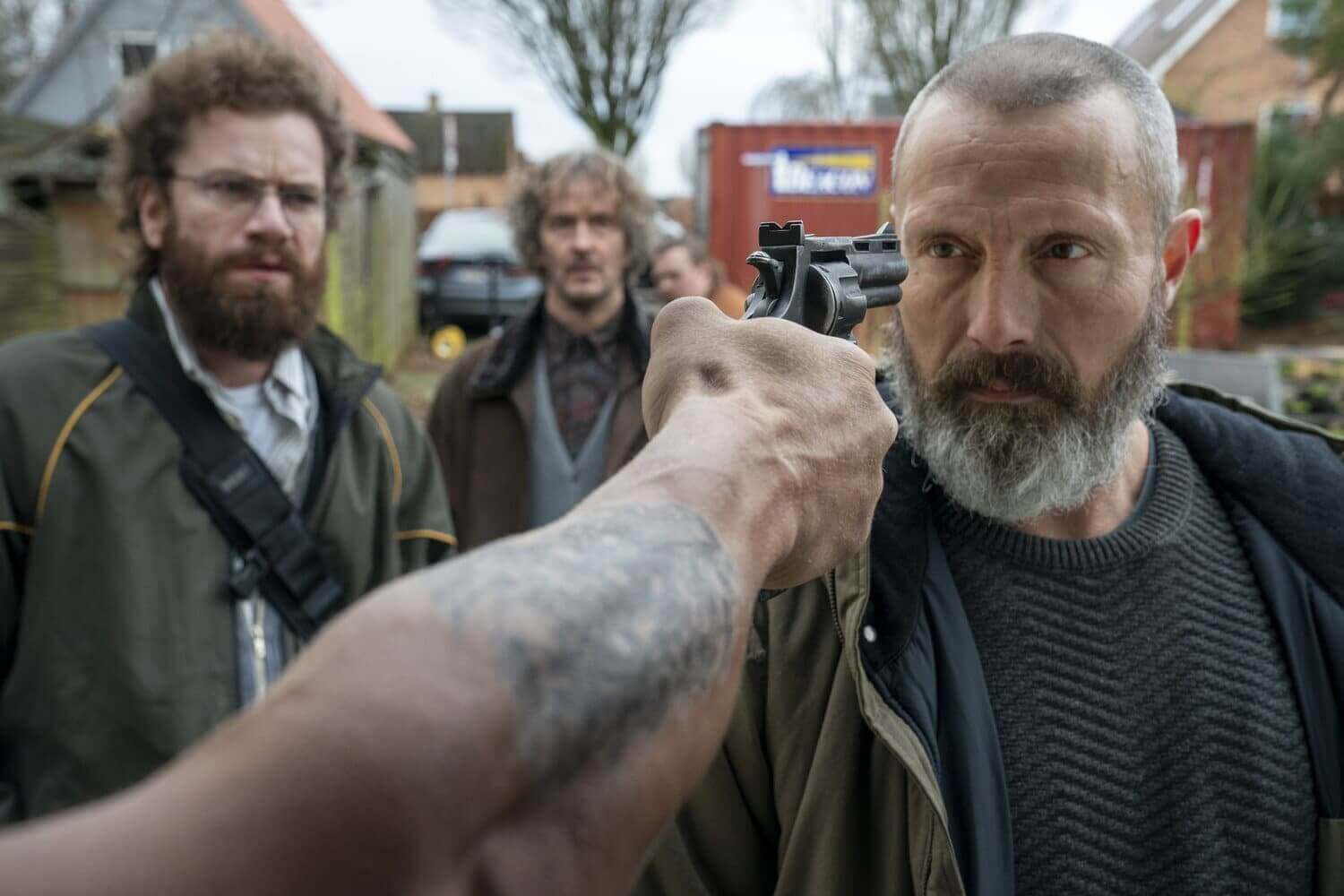 Riders of Justice starts with a series of unfortunate events. Mathilde’s (Andrea Heick Gadeberg) bicycle is stolen, her mom’s car doesn’t start, and her father Markus (Mads Mikkelsen), a Danish soldier,  calls to inform the pair he’s extended his tour of duty and won’t be returning home as scheduled. In an effort to turn the day around, Mathilde and her mother decide to take the train into the city, blow off school, and spend the day shopping together. Only, fate has bigger plans.

On the same busy train car as mother and daughter,  handicapped data analyst Otto (Nikolaj Lie Kaas) offers his seat to Mathilde’s mother just before the train car catastrophically collides with another. Mathilde and Otto walk away from the event relatively unscathed, but her mother is killed instantly.

Now the sole caregiver of Mathilde, Markus returns home to try to pick up the shattered pieces of his family, all while avoiding his own grief. Things only become more complicated when Otto, alongside his merry band of data-mining misfits Lennart (Lars Brygmann) and Emmenthaler (Nicolas Bro) unearth a nefarious assassination attempt, turning Markus’s dial from “un-processed grief” to “REVENGE”.

Though I came to Riders of Justice all strapped in for a rambunctiously action-packed shoot-em-up thriller, I got so much more. I’ve been a cheerleader for team Mads since his gut-wrenching performance in the dark drama The Hunt (2012), and of course when he sunk his teeth into the mammoth-sized role of Hannibal in Brian Fuller’s acclaimed series from 2013-2015. Mads brings a quiet level of depth to every role he portrays, and it’s no surprise filmmakers have been trying to coax him into becoming an Action/thriller juggernaut for years. (The most recent attempt that comes to mind is Jonas Åkerlund’s Polar (2019), which sees Mads sporting a super dope eyepatch in a wintery cabin setting).

“Though I came to Riders of Justice all strapped in for a rambunctiously action-packed shoot-em-up thriller, I got so much more.”

And while I love me some Mads in an eyepatch, Riders of Justice elevates Mads beyond cool badass action-star with a gun in a way I didn’t think possible. I knew Mads was capable of deep, elevated roles as well as intense, action-heavy ones, but I had no idea they could be pulled off simultaneously. And well. 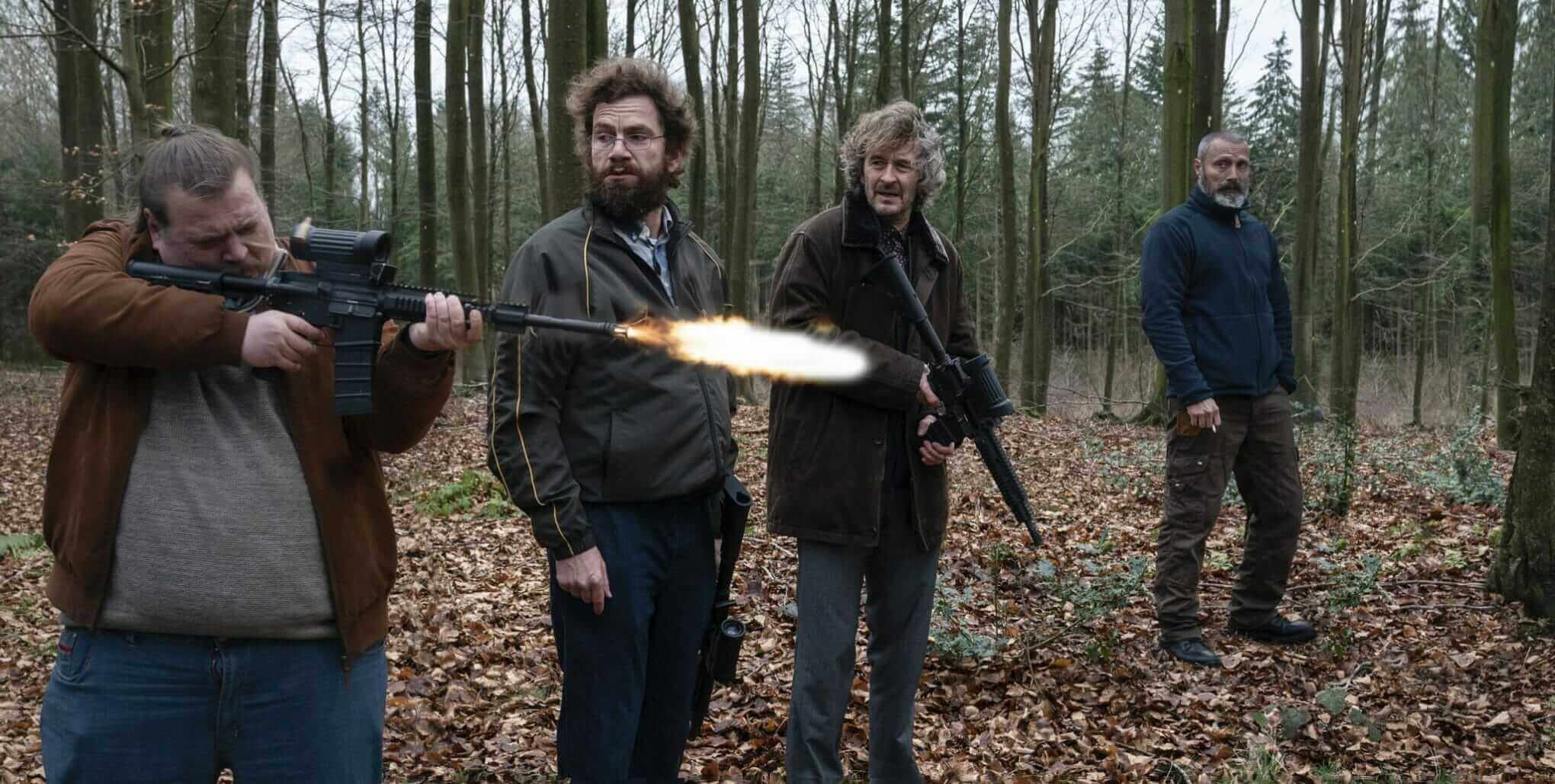 Riders of Justice oscillates between intense action and intense grief like a light switch with a broken dimmer mode. I found myself alternating from literal tears to fist pumps without any breathing room between. (side note: I cried WAY too many times during this movie. ) Writer/Director Anders Thomas Jensen tells the story with such care for his characters that he allows them to dictate and drastically alter the tone of a scene to suit who they are and what they need to express to a given circumstance —something that doesn’t fit within the formula of the standard Hollywood model.

Markus makes cringeworthy mistakes with his daughter Mathilde, but then goes on to do equally endearing attempts to be a good father. Otto exudes so much empathy he quickly becomes our barometer for ‘goodness’, but his backstory unveils so much more to his character. And too for his quirky pals Lennart and Emmenthaler, two characters who would typically be reserved to the sidelines who are allowed to portray idiosyncrasies and real human traits in abundance.

“Riders of Justice oscillates between intense action and intense grief like a light switch with a broken dimmer mode.”

Every character in Riders of Justice is given their own moment in the spotlight, a decision that will leave audiences desperate for more time with each of them. I rarely have a hard time choosing a favorite character when I watch a film – you have one hero and everyone else. Riders of Justice plays out like a flush in a deck of cards. Each individual card is great, but together they make the hand.

I went in expecting action, and there is action to be had. But the soul of Riders of Justice is what makes this film what I think will quickly become a timeless must-watch.

Riders of Justice hits select theatres in LA & NY on May 14th. It’ll arrive in theatres everywhere and on-demand May 21st. Are you excited to check this one out? Let us know in our Discord!

TLDR I went in expecting action, and there is action to be had. But the soul of Riders of Justice is what makes this film what I think will quickly become a timeless must-watch.