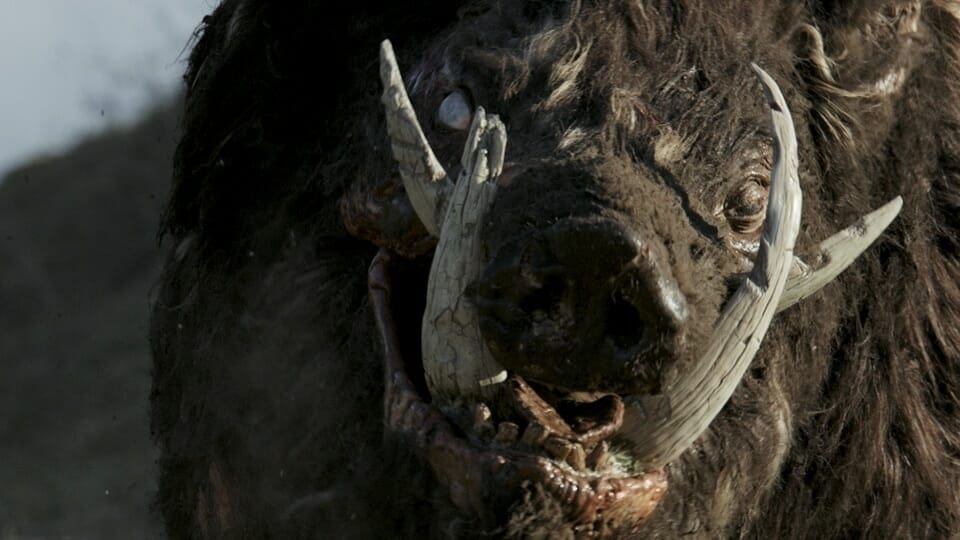 Chris Sun’s terror-in-the-outback film Boar premiered at Australia’s Monster Fest 2017, and after a long journey from the other side of the world, will be available to stream on Shudder June 6, 2019. One major reason as to why prehistoric mammals were prone to gigantism (abnormal largeness) is because dinosaurs became extinct. Ecological niches opened up and the mammals prospered. Although with the eventual shortage of food, bigger specimens died out and the smaller ones survived. This is why many mammals nowadays are comparatively smaller than their ancestors. In the vast, remote interior of Australia known as The Outback, however, one animal has proven to defy evolution.

A misconception about the Australian Outback is that it’s contained to the purlieu of Alice Springs in the Northern Territory. To a foreigner’s surprise, the Outback comprises 70% of the continent, and few people actually live there. Which also means the amount of tourists exploring the region outnumber the residents. So in spite of its daunting acreage and virtual detachment from civilization, people still venture into the Outback. Perhaps its uncharted spirit is simply too alluring. In the recent Ozploitation horror movie Boar, one family wishes they had made different vacation plans. Debbie Monroe (Simone Buchanan) is a remarried mother of two who is on her way to see her brother Bernie (Nathan Jones). She and her new husband Bruce (Bill Moseley) are doing their best to keep the troops—Debbie‘s pubescent son Bart (Griffin Walsh), and smitten daughter Ella (Christie-Lee Britten) and her bilious beau Robert (Hugh Sheridan)—under control until they reach Bernie‘s farm. In the meantime, the countryside has become a feeding ground for a territorial and immense wild pig.

Australia’s filmmakers are well aware of the Outback’s reputation as being somewhere a lot of people go, but never come back from. Yet in Boar, we don’t get an extensive scope of the sweeping area that attracts hapless tourists. Most of the film occurs in and around Kandanga, which can hardly be described as desolate. The people who occupy the locality are coarse busybodies who take notice of Debbie‘s return. So as the town gossips and Debbie reconnects with her statuesque brother Bernie, a selection of human one-offs become pig fodder elsewhere.

Throughout the first hour of the film, we witness a repetitive omnibus of the title monster’s intermittent warm-up kills. Slasher enthusiasts will have no problem with all the well-worn tropes. For instance, an amorous camp-out is purposely interrupted by the huge and hungry hog. This pattern of the boar’s nocturnal bloodletting sprinkled among scenes from the main characters’ family reunion is markedly plodding. The time spent on the story padding and the body count could have been better served developing Debbie‘s clan. Save for Uncle Bernie, the Monroes are just not that interesting.

The upside to all the casual boar mayhem is we get ample glimpses of the film’s voracious villain achieved through commendable practical effects. Director Chris Sun (Charlies’s Farm) is a lover of eighties horror so it’s no surprise he chose to get hands-on when constructing the tusked behemoth at large. With the help of makeup artist Steven Boyle (What We Do In the Shadows), the boar was brought to life through an eight foot tall and fourteen foot long prop that weighed about six hundred kilograms. The tangible beast was made of fiberglass, and it was maneuvered internally by several suit actors. Sun tried to use his practical pig as much as possible as he believed it helped the cast with their performances, but CGI was utilized in more active scenes. So while the visuals aren’t entirely practical, the ones that are are downright impressive. Aside from grand goriness and estimable physical effects, the film coasts on its cast of able and familiar faces from Australian pop culture. Particularly, the towering Bernie is portrayed by former pro wrestler turned actor Nathan Jones (Mad Max: Fury Road); John Jarratt (the Wolf Creek franchise) plays against type as he’s a good guy for once; and Melissa Tkautz is plucky bar owner Sasha, a seasoned celebrity whose credits include singing and being one of the haves in a Real Housewives offshoot. Debbie‘s new husband Bruce is no other than horror darling Bill Moseley, who regretfully doesn’t have much to do here other than remind everyone he’s not Australian. Overall, the characterizations of Boar are present and attentive, but they never extend beyond quirks and surface level definition.

Since its inception, Boar has had the displeasure of being compared to fellow Australian eco-horror Razorback. Both films contain rampaging feral swine, and they each take place in the Outback. Aside from those similarities, the movies are entirely different in execution. Russell Mulcahy’s 1984 picture is a rigorous display of the famous terrain and its inhabitants’ place on the food chain. Chris Sun’s film leans strongly toward being a traditional creature feature with an emphasis on action and splatter. Neither approach is wrong and it’s okay to like both. In the case of Boar, it’s absolutely what you would expect based on the premise. If you’re fine with that, you should be as happy as a pig in mud.

Boar comes to Shudder June 6, 2019. Let us know what you thought of the film on Twitter, in the official NOFS Subreddit, and on Facebook in the Horror Movie Fiend Club!

TLDR Throughout the first hour of the film, we witness a repetitive omnibus of the title monster's intermittent warm-up kills. The upside to all the casual boar mayhem is we get ample glimpses of the film's voracious villain achieved through commendable practical effects. Chris Sun's film leans strongly toward being a traditional creature feature with an emphasis on action and splatter. If you're fine with that, you should be as happy as a pig in mud.