High school is its own unique hellscape, but it’s an especially evil place for the girls of My Best Friend’s Exorcism. It’s hard enough trying to navigate the teenage politics and hormones that rule the school but all that nonsense tends to gets pushed aside when you’re possessed by a demonic entity.

The source material of this teenybopper popcorn movie is a rollercoaster ride of spooky stuff that the adult horror world has been gushing over for years now, but it’s time we let our baby go off and make its own way in the world. It can be hard to see a piece of work you love gifted to someone else, but the world needs new horror movies for the kids to call their own. And like it or not, My Best Friends Exorcism has the makings of a contemporary classic for a new generation of horror fans.

Adapted from Grady Hendrix’s best-selling novel of the same name, My Best Friend’s Exorcism is directed by Damon Thomas (Penny Dreadful) from a screenplay by Jenna Lamia (Good Girls). This slumber party [whatever the opposite of a massacre is] stars Elsie Fisher (Texas Chainsaw Massacre, 2022) as a young girl named Abby just trying to navigate the ups and downs of late 80’s teenage life with her best friend Gretchen, played by Amiah Miller (War For The Planet of The Apes). Everything’s all very PG until one night the girls find themselves trapped in the terrifying world of….PG-13! *gasp*

At a slumber party with their friends, a cute boy convinces the girls to try Acid. It’s a pretty fun experience for most of the group but Gretchen has a different experience. To say she had a bad trip would be putting it lightly but suffice to say, she gets lost in the woods alone and comes back a very, very different person. She’s got the tell-tale signs of a possessed person (creepy stares, morose thoughts, and an aversion to Christianity) but because those are also the tell-tale signs of your average teenager, everyone figures Gretchen is just going through a phase. You know, that “I’m possessed by the devil and I’ll eat your soul if you come near me” phase that we all go through around that age.

Abby is the only person concerned for Gretchen. She saw something happen to her that night she got lost in the woods, but she doesn’t know if what she saw was real. And who wants to admit to their parents at 15 that dropped acid with their friends at a sleepover? You’ll never be allowed to leave the house again! So, with the help of a body-building Christian entertainer (played by Glow’s Christopher Lowell), Abby sets out to expell the demon that has Gretchen’s eternal soul in a stranglehold.

The movie’s biggest sin is that it has no personality and no sense of consequence. Despite being a story about a girl with the power to kill and psychologically terrorize anyone that comes near her, everyone feels safe from harm. There are beats of weird, demony horror where a giant 3-foot long worm comes crawling out of a girl’s mouth but don’t worry, it’s all smiles and sunshine a few seconds later. Gretchen’s life is completely upended by this possession, as you would expect, but it carries all the weight of a post-breakup funk.

Normally I’d say “this movie wasn’t made for me” and leave it at that but I am the audience this movie has been marketed to. My Best Friend’s Exorcism may not be the touching, terrifying tale of teenage friendship I had hoped it to be, but it will absolutely find it’s audience in a younger generation. If you have a pre-teen daughter who is super excited about Halloween every year, show them this movie! My Best Friend’s Exorcism is guaranteed to become a slumber party hit for a new crop of horror fans and old curmudgeons like me will just have to accept that.

“If you have a pre-teen daughter who is super excited about Halloween every year, show them this movie!”

My Best Friend’s Exorcism is streaming on Amazon Prime now, just in time for the Halloween season! Let us know what you (and especially what your kids) thought of this teenage exoricsm gateway drug over on Twitter, Reddit, Facebook, and in the official Nightmare on Film Street Discord. Not a social media fan? Get more horror delivered straight to your inbox by joining the Neighbourhood Watch Newsletter. 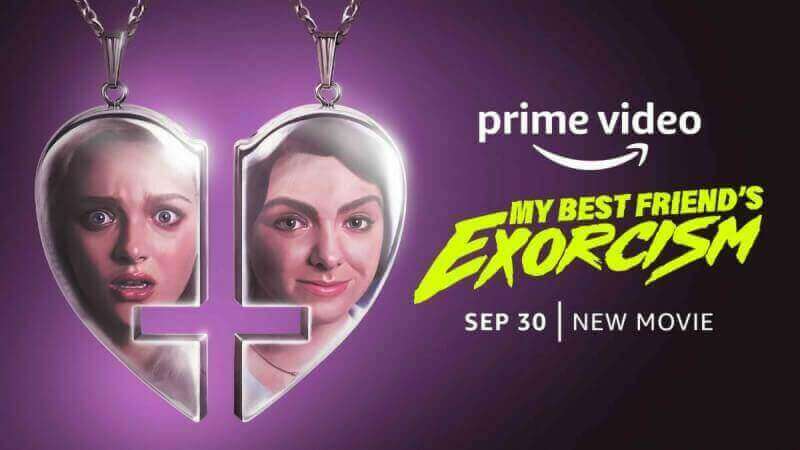 TLDR My Best Friend's Exorcism may not be the touching, terrifying tale of teenage friendship I had hoped it to be, but it will absolutely find it's audience in a younger generation. If you have a pre-teen daughter, show them this movie! My Best Friend's Exorcism is guaranteed to become a slumber party hit for a new crop of horror fans and old curmudgeons like me will just have to accept that.